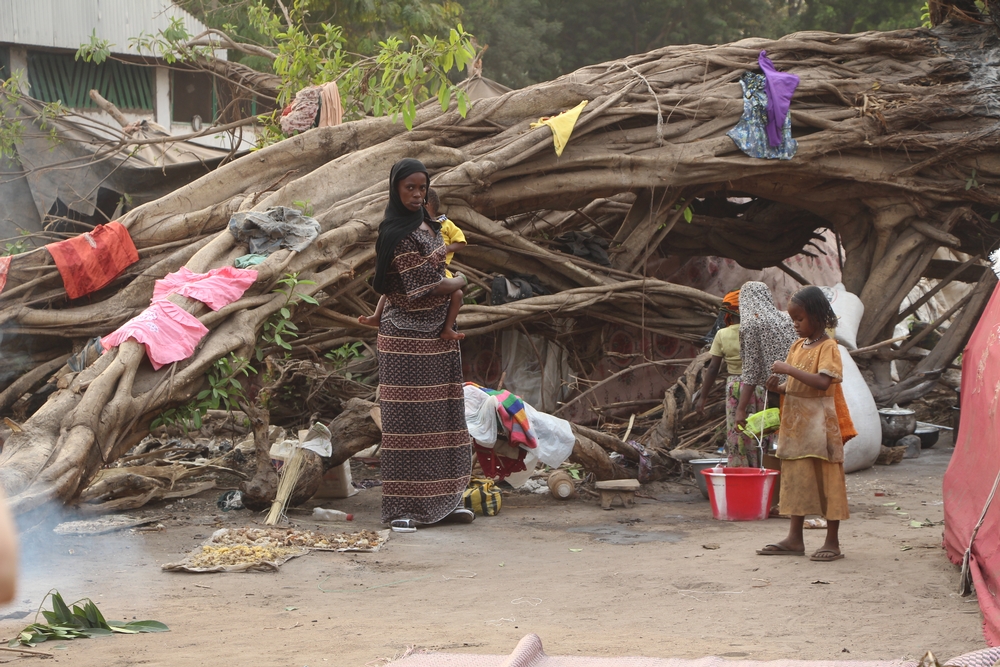 CAR Refugees in Chad: “At least here we don’t hear the sound of bullets”

More than 15,000 people have arrived in the Chadian capital over the past two months after fleeing extreme violence in neighbouring Central African Republic.

Those who made it to N’Djamena are the lucky ones – many were separated from family members in the scramble to escape, and some witnessed the murder of those closest to them. But with no hope of returning home, the refugees face an uncertain future in Chad.

Walk past this building and you would never guess that hundreds of refugees live behind its walls. But if you push your way past the soldiers slouching at the gate, you will find yourself amongst a mass of women and children, and a small number of men, camping out around piles of bags and suitcases.

Altogether, some 500 people are living in the Clément centre, according to the Chadian Ministry of Social Affairs, most with horrifying stories to tell of the violence that forced them to flee.

“After my father was killed and his shop looted, my mother and my sister wanted to leave with our truck,” says 18-year-old Mahmat. “I didn't want to leave. Why go to Chad? To do what? Central African Republic is my country ­– I was born in Bangui, like my parents.”

Not long after, Mahmat realised that staying was not an option. “I managed to go to the market,” says Mahmat, “and on my way back, I was told that our neighborhood was being attacked. Some neighbours gave my brother and I a lift in their truck. The two vehicles behind us in the convoy were hit by grenades. Finally we reached the airport. It was horrible, everybody was running, and I ran too to reach the plane.”

In the scramble for the plane, Mahmat became separated from his brother, and since then he has had no news of him.

Mahmat is not the only one to have lost family members to the violence that has engulfed Central African Republic.

One young man, who asked not to be named, witnessed the killing of his family in Bangui. He escaped by hiding under a bed in the house of a neighbour. Later he managed to reach the Chadian embassy, where hundreds of people had sought refuge.

Two days later the embassy was itself attacked. The Chadian army provided an escort to the transit centre at Bangui airport, where he was able to board a plane to N'Djamena, one of more than 100 flights organised by the Chadian authorities and the International Organization for Migration (IOM). “At least here we don't hear the sound of the bullets," he says.

Halima also spent a couple of days in the crowded Chadian embassy in Bangui, before being escorted to the airport with her two older children. Her third child was born nine days ago in N'Djamena. Halima has family in N’Djamena, but her parents – who have been to visit her in the Clément centre say they don’t have enough space to have Halima and her children to stay.

A place to stay

The Chadian authorities and the IOM are searching for the parents of refugees of Chadian origin, in the hope that they can find them places to stay. Some refugees have been transferred to a camp in Gore, a city in the south of the country.

“What are we going to do in Gore?” asks an 18-year-old man, who arrived at the camp with a group of about 100 refugees. “Is there a high school here?”

But most of the refugees who arrived in N’Jamena by plane from Bangui are living in social centres and schools scattered across the capital. In the Clément centre, the Chadian authorities distribute blankets and food, while cooks prepare three meals a day.

A woman stands close to the fence, motionless, her face hidden behind her scarf. Her son tells the story that she cannot bring herself to voice. The family are cattle herders and members of the Peuhl ethnic group.

One day, members of the anti-Balaka militia stormed into their compound and set it on fire. The young man’s mother saw six of her children die that day.

Not one of these refugees knows what the future will bring. Although they are the lucky ones who have escaped the violence, they have lost family members, homes and possessions, and all know that their lives can never be the same.

MSF teams have been providing medical consultations to the newly arrived refugees staying in social centres and schools since mid-February 2014. Many are in need of basic healthcare, including treatment for diarrhoea, respiratory tract infections and sexually transmitted diseases. Teams have also found a number of serious post-operative cases which require follow-up care. MSF teams are also setting up water points for the refugees. MSF has also launched a response in the south of Chad, where 25,000 refugees have arrived from Central African Republic.