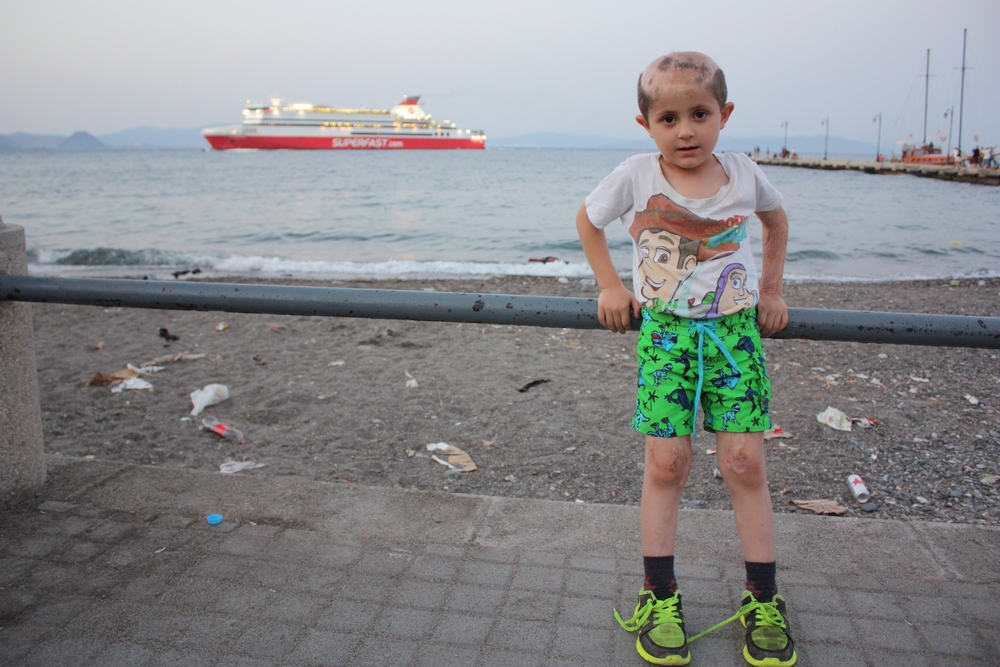 Greece: "We had no other choice but to leave Syria"

Meet Adnan. He is five-years-old and from Aleppo in Syria. When we met him, he was charging around outside the crowded and dirty police station in Kos close to Médecins Sans Frontières/Doctors Without Borders (MSF)’s mobile clinic.

Along with his mother, father, grandparents, younger sister and the family’s two-month-old baby, Adnan slept on the ground in the town of Kos for nine nights.

On 7 September, they finally received their papers and were able to buy tickets for the ferry to Athens. For all generations of the family, their relief at being able to leave the island was palpable.

Adnan’s father, a teacher of Arabic literature, shared some of his experiences with MSF.

"A bomb hit our house in Syria"

Alva White/MSF
Adnan has been living on the streets of Kos with his family since he arrived as a refugee from Syria
“We lived in a little town near Aleppo. Then, about 18 months ago, a bomb hit our house. Adnan, who was alone in his bedroom at the time, was seriously injured. His aunt and two female cousins were killed in the blast.

Adnan’s mother was badly burned. An ambulance managed to take them across the border that night to a field clinic in Turkey for emergency medical care.

I can’t remember anything about that night. We were in such a terrible state, in such extreme shock. We were all totally out of it.

We stayed four months in Turkey. They helped as much as they could, but they were limited in how much they could do. We didn’t have the money to get Adnan the medical help he needed. So our only option was to run, to run away. We had no other options.

"No other choice but to leave"

We have been in Kos for seven days so far. We have not being staying in one particular place – we move around, sometimes in the tent, or in a garden, or somewhere we find that is quiet. Adnan finds it very difficult to sleep at night.

He gets scared by all kinds of noises, even just a car engine at night.

It took us two-and-a-half hours to reach Kos from Bodrum, in an inflatable boat designed to carry around 20 people, but was packed with 50-60 others.

My hopes for the future are just to live like everyone else. To send my children to school. I would like very much for Adnan to have reconstructive surgery so that he won’t be discriminated against at school for this war.

Our family have been put in a situation where there was no other choice but to leave Syria, and then to leave Turkey.

We want to share what has happened to us. We have nothing to lose. All we have are the clothes we arrived in.”

Find out more about MSF's work with refugees and displaced people

Read our call to European leaders