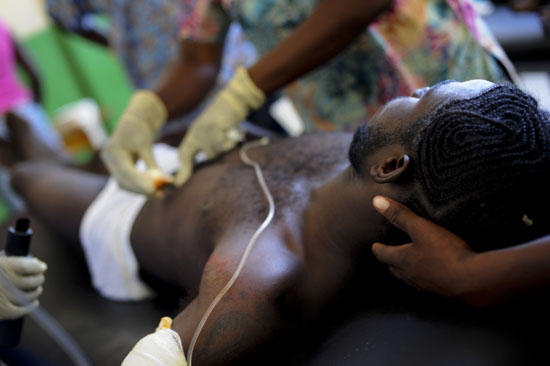 Seven days after the earthquake, international support is materialising in Port-au-Prince and Haiti as a whole, but many of the needs are far from being covered. Even the most serious cases can hardly be taken care of due to lack of structures offering good surgical conditions. Food and water remain an issue. Aftershocks and rushed evacuations are still daily scenes. The population is getting frustrated, and tension is on the rise.

Assistance is still lacking and suffers from organisational difficulties. There is growing resentment and suspicion among the Haitian population of the US military control of airport. Compounding perception issues for aid agencies may be the increasing militarization of aid. We are still facing critical challenges in landing cargo flights, with many planes being rerouted to the Dominican Republic. Medical supplies are running low in several MSF facilities. Transport from the Dominican Republic is becoming increasingly difficult. At least two MSF trucks had problems arriving in Haiti--one got lost with a convoy and the other had mechanic problems.

MSF has been travelling to areas outside of the city and is about to extend the medical care to the people there, but parts of the country remain unexplored. Needs for vulnerable sections of the population such as orphans or paralysed people are not covered, and might not be before a while. The airport remains an issue lacking fuel and space. There are shortages of vehicles to get around the city so it is very difficult to move from one location to another. Phone connections remain sporadic and unreliable.

At Trinite hospital, two operating theatres are running, one in a shipping container. Since Wednesday, teams have carried out an average of 25 surgeries a day. The addition of the second operating theatre should help the surgical team to work more efficiently and handle priorities and do an additional 20 surgeries per day. Today a triage area and a “ward” for post-operative patients were set up in front of the building in the street

In the Pacot rehabilitation centre, 160 patients have been hospitalised, and transfers have started to Trinite. A third operating theatre has been established to perform simpler surgeries. A new surgical team has arrived to relieve the permanent team.

MSF teams have treated more than 1,000 patients in Martissant since the quake, many in the MSF office itself. More than 500 patients in need of surgery have been transferred from Martissant to Choscal Hospital in Cite Soleil. Teams are focusing on life-saving surgery. This includes fractures, burns, amputations, emergency obstetrics, and increasingly, gunshot wounds. They’ve been working 24 hours a day and have performed over 90 surgeries since the operating theatres started functioning.

Another team took over the Carrefour hospital in the South West of the city and started treating patients, mostly doing surgeries. This was one of the hardest hit areas and getting around remains difficult. They hope to be able to keep the hospital running on a 24/7 basis. 500 patients were treated in Carrefour in the first 24 hours, with 90 critical surgeries, including amputations, burns and fractures. 2 caesarean sections and 6 complicated deliveries have also been performed.

Inflatable Hospital
One full charter landed yesterday morning in Port-au-Prince with the second part of the hospital. The first part of the cargo, rerouted two days ago to the Dominican Republic is on its way to Port-au-Prince, although two trucks have broken down and need to be located. A field has been identified to hold the new 100 bed hospital.

Assessing New Areas
MSF has also been travelling to areas outside of the city and is about to extend the medical care to the people there.

Teams have been assessing Leogane, one of hardest hit areas with up to 85 percent of buildings destroyed. MSF is supporting a nursing school with emergency care; nurses had previously been providing what care they could. MSF teams will search for more locations to support medical activities. An advisor on the ground is to assess and support management of waste, water and infection control.

In Jacmel, on the southern coast very near to the epicentre of the earthquake, around 60% of buildings were destroyed. The hospital has partially collapsed but the operating theatre is still usable. MSF will be starting work there as soon as possible, although all of the transportation has to be done by helicopter because the roads are blocked.

Saint-Marc was one of the least affected areas, and as such many people are fleeing from Port-au-Prince and gathering there, and hundreds of injured people have arrived at the hospital. MSF is planning to launch an intervention there soon.