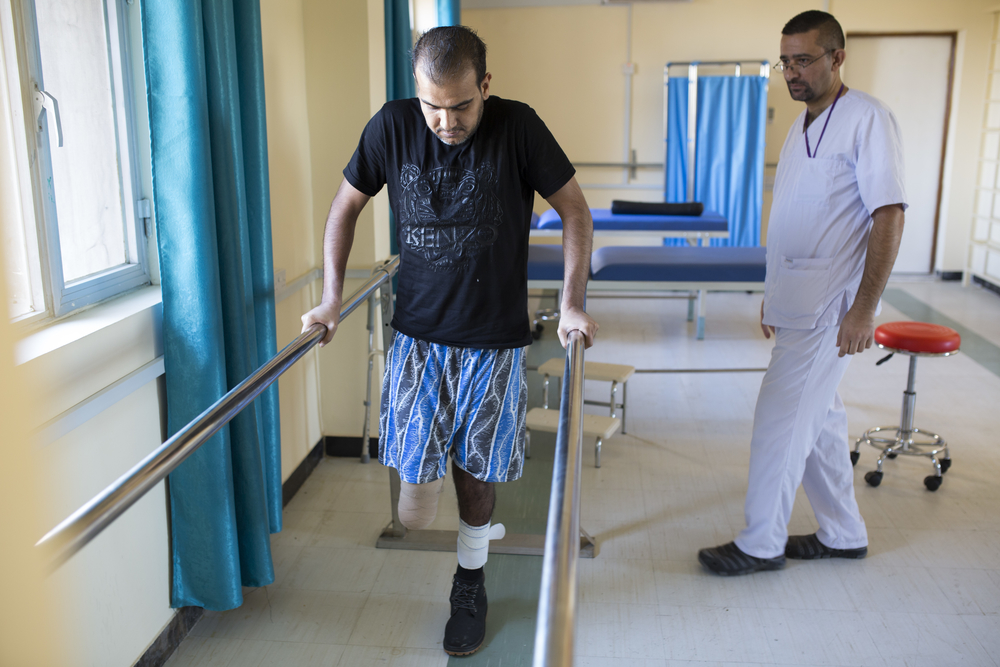 Iraq: Helping victims of war get back on their feet

A year ago Médecins Sans Frontières/Doctors Without Borders (MSF) opened the Baghdad Medical Rehabilitation Centre (BMRC) to support victims of war in Iraq. The centre provides much needed post-surgical rehabilitation care, including physical and psychological support.

Mohammed Hussein, 27, can’t carry his newborn baby in his arms yet. Last year, fighters from the Islamic State (IS) group ambushed his car near the border between Iraq and Jordan. Both his legs were fractured and he suffered a severe nerve injury in one of them. “I was lucky, because I still have one good leg left,” he said. Four of his friends died in the attack. Mohammed managed to escape and hide. “They burned our car. I activated my phone’s GPS and recorded a voice message for my family. I thought I was going to die.”

For more than a year, Mohammed has been going in and out of hospitals across Iraq. Two major surgeries later, he is receiving post-surgical rehabilitation care at MSF’s centre in Baghdad.

The BMRC is the only health facility in Baghdad governorate offering comprehensive rehabilitation care, including physical and psychological support, to the victims of war injured by bomb blasts and gunshots. There is a huge lack of such services in the country, where healthcare facilities have been severely damaged after years of war. Since August 2017, more than 150 patients have been treated at the BMRC by a team of 70 doctors, nurses, physiotherapists and psychologists.

Patients like Mohammed come from different regions across Iraq and are referred to the BMRC by MSF medical liaison officers, who regularly visit Baghdad’s public hospitals looking for potential patients in need of specialised care.

At the BMRC, Mohammed receives medical care including physiotherapy, pain management and psychological support. After two months of treatment he is able to stand with a walker, but might need another surgery to repair his damaged nerve.

In December 2017, Iraq declared the end of the war against the Islamic State group. But the destruction of public infrastructure after decades of war has left many injured people without adequate post-surgical rehabilitation services. War injuries often result in long-term impairments and disabilities. Insufficient nursing care, untreated pain and lack of psychological support can lead to medical complications and add to people’s suffering.

“Early physiotherapy is the key to fully heal and recover after multiple surgeries. It has an impact on the early stages of rehabilitation, strengthens the patient’s weakened and wounded limbs, prevents possible contractures and eventually restores mobility” explains Renata Beserra Xavier, MSF’s physiotherapy manager at the BMRC.

Psychological care goes hand in hand with physiotherapy: it is vital to help patients recover from the traumas most of them experienced during the latest conflict. Since activities started at the BMRC, 163 patients have joined individual or group psychological support therapy sessions, and MSF teams have conducted 1,617 follow-up sessions. They also run occupational and art therapy services.

“Mental health teams are supporting patients during their follow-up at the BMRC. They address issues related both to the traumatic events our patients have been through, and to their daily medical care and rehabilitation that can last for months,” described Saima Zai, a mental health manager at the BMRC. “I remember an 11-year-old girl coming in for physiotherapy and being terrified about a new surgery she was going to face. The mental health team helped her and her mum handle the situation and they were both relieved at the end of the first session.”

A psychologist from Pakistan, Saima Zai previously worked for MSF in Mosul, Iraq, and in Amman, Jordan. “In the Middle East, it is difficult to access mental health support in public hospitals. There is still a lot of stigma about it.”

A unique project in Iraq

After decades of war, Iraq faces a high incidence of post-operative infections, particularly on war wounds treated in inadequate conditions because of the lack of functional health facilities. Most of these infections are multi-drug resistant due to inappropriate diagnosis and subsequent over prescription of antibiotics.

The BMRC’s high quality infection control and expertise in antibiotic treatment and resistance makes it a unique initiative in Iraq. Patients receive a specific diagnosis for antibiotics, based on medical examinations such as bone sampling and sensitivity testing, to ensure they receive the best care possible.

For complex medical or surgical cases, like bone infections, BMRC patients can be referred to MSF’s Reconstructive Surgery Programme in Amman, Jordan, where more than 11,000 surgeries have been performed over the past 10 years, on patients from Syria, Libya, Yemen and Palestine.