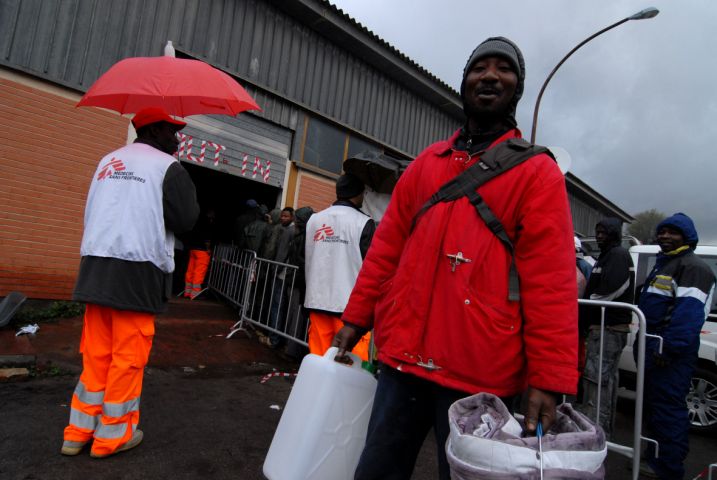 11th January, 2010- The recent violence in Calabria, Southern Italy, has placed the plight of the region’s seasonal migrant workers in the international spotlight. Médecins Sans Frontières (MSF) denounces the ongoing neglect and exploitation of this vulnerable group.

Following the outburst of violence against seasonal migrant workers in Calabria, sites where thousands of migrants had been living since November are now completely empty. Most have been transferred by Italian authorities to centres for migrants in other parts of Southern Italy and have had to leave most of their belongings behind.

“Some people were very reluctant to leave because they had not been paid for their work yet, others were afraid of being detained or deported”, said Alessandra Tramontano, MSF’s medical coordinator. “But they were so scared that they felt they had no choice but to leave.” MSF has also visited seven migrant workers who were hospitalised after being victims of gunshots or beatings.

“The recent episodes of violence and hostility are an extreme symptom of the chronic neglect seasonal migrant workers are subjected to in Italy,"said Loris de Filippi, MSF operational coordinator. “While they are crucial to the labour force in Italian agriculture, they are easily exploited”, he added.

Seasonal migrant workers in Southern Italy are subject to dire living conditions. They often live in abandoned houses or factories, exposed to rain and cold weather in winter. The sites have poor sanitation and health care is limited. Most health conditions our medical team sees are related to their appalling living and working conditions, such as respiratory infections, osteo-muscular pain or gastroenteritis.

MSF has provided humanitarian assistance to seasonal migrant workers in different regions of Southern Italy since 2003 (Puglia, Campania, Calabria, Sicilia, Lazio and Basilicata). The latest project, in Piana di Gioia Tauro, started in December, as migrants gathered for the fruit-picking season. Along with a mobile clinic, an MSF team visited the main sites where migrants lived. Between 21st and 23rd December, MSF distributed kits containing blankets, buckets and other essential items to help 2,000 migrant workers in the winter season.

Since MSF began working with seasonal migrants in Southern Italy, it has denounced the appalling living conditions and pushed authorities to take measures to improve the humanitarian situation of migrants. With two reports, A Season in Hell (2008) and The fruits of hypocrisy (2005), MSF exposed the dramatic conditions of thousands of migrants who work during all seasons of the year in the farms of Southern Italy.

“Little has changed for the thousands of migrant working in Italian farms since we started in 2003. Year after year, our teams go back to the same areas and witness the same horrible conditions, which we try to alleviate by providing medical humanitarian aid. It is about time Italian authorities take measures to improve the conditions of these workers, respect their dignity and improve their access to healthcare”, said Loris de Filippi.