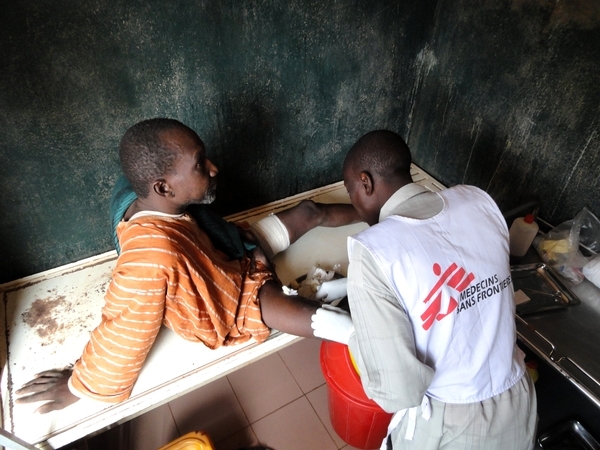 Mali: Emergency not yet over for vast majority in north

Médecins Sans Frontières/Doctors Without Borders (MSF) has been supporting medical facilities in two of the three regions in northern Mali since April 2012 to ensure access to free medical care for the vulnerable.

However, the insecure environment is preventing the medical teams from carrying out activities in rural areas. Hundreds of refugees are continuing to cross the border to Mauritania every day. The emergency is not yet over for the vast majority of the population in northern Mali.

While fighting has moved towards the more southern region of Kidal, there are still inaccessible rural areas where the people are afraid to leave their houses. "Due to the insecurity, we cannot assess the needs of those living outside the urban areas in which we are working," explains Rosa Crestani, MSF Emergency Programme Coordinator.

A general environment of tension and distrust among the local population may further undermine access to healthcare.

"We fear that some patients remain trapped at home," she continues.

“It is difficult for these people to access food, and the risk of malnutrition is significant. The people must not be the target of violence and must be able to safely access the vital medical and humanitarian aid they need”.

Living in fear of violence for almost a year

MSF and Malian volunteers have been running activities in the regional hospital of Timbuktu in northern Mali since April 2012. More than 50,000 consultations have been performed, 400 births have been assisted and 50 wounded have been treated in the hospital and the health centres supported by MSF in this region. Ambulances are also referring patients to this hospital from the Niafounké and Gourma Rharous district hospitals, along the Niger River.

In the Mopti region in central Mali, MSF supports a community health centre in Konna and a community- and reference health centre in Douentza. Since November 2012, MSF has treated nearly 8,000 people. Since February,  MSF has treated 5 wounded hit by unexploded munitions in Konna. In Gao and Ansongo in eastern Mali, nearly 1,500 patients have been treated since September 2013.

“The objective of MSF's activities is to ensure access to free medical care for those who really need it” says Crestani. "We primarily treat malaria, respiratory infections and obstetrical- and gynecological cases. Being a doctor in times of conflict does not just involve treating the wounded, but also ensuring that a mother can give birth in safe and sanitary conditions," she says.

Nearly 170,000 refugees have reached the refugee camps in Burkina Faso, Mauritania and Niger, where MSF teams are providing primary and secondary medical care. Since the start of the year, MSF has carried out nearly 12,000 medical consultations and 5,000 vaccinations in these three countries. Mauritania has the highest number of refugees, with the camp in Mbera accommodating nearly 70,000 people.

Around the end of January and the beginning of February 2013, the border point in Fassala, Mauritania, registered an average of 300 arrivals a day. These are mostly women and children from Timbuktu, Lere, Goundam, Larnab and Niafounké, who are still living in poor conditions without any hope to return home in the near future.

For its activities related to the conflict in northern Mali, MSF has not received funding from any governments as its work is exclusively financed by private donations.  MSF is currently working in Timbuktu, Niafounké, Gourma Rharous, Gao, Ansongo, Douentza, Konna. Since 2009, MSF has also been running a paediatric programme (primary and secondary health care) in a 350-bed hospital paediatric unit and in five health zones in the district of Koutiala, in the south of the country.

MSF teams are working with Malian refugees in Mauritania, Niger and Burkina Faso.

MSF has been working in Mali since 1992.