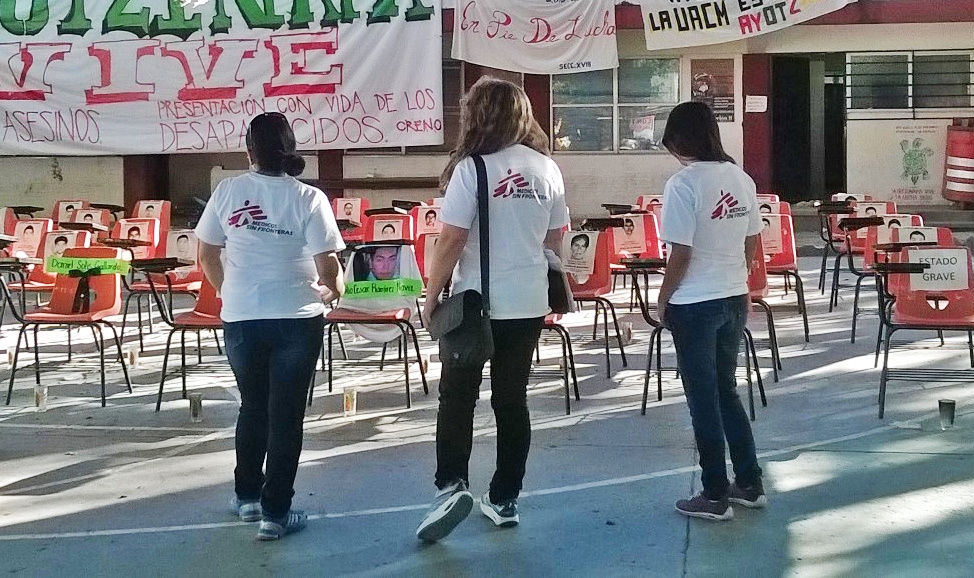 Mexico: MSF caring for relatives and classmates of the 43 missing students in Iguala

Médecins Sans Frontières/Doctors Without Borders (MSF) is offering psychosocial and therapeutic support through psycho-educational activities and clinical psychological consultations to nearly 400 relatives and classmates of the 43 missing students in Iguala, in Guerrero state, Mexico.

The students went missing on 26th September following an incident where six people were killed and 20 others were injured. Given the enormous impact these incidents had on the mental health of the victims’ relatives and classmates, MSF started offering them psychosocial support a month ago after the families gave their consent.

Individual and group support for victims

“These people are directly suffering from the consequences of the high levels of violence in some areas across the country, and we can help them by providing them with emergency psychosocial support, as we are already doing through other projects in Mexico,” explains Marc Bosch, MSF country director in Mexico.

The people receiving care have been gathered for nearly two months on the school premises, located in the Tixla municipality, in the same region as Iguala. Psychological care is very important to help the victims cope with the current uncertainty in their lives as well as a potential tragic ending.

MSF started providing care through a team made up of four psychologists, one logistician, one mental health expert and one coordinator. Every week, the psychologists organise several group, as well as individual, support sessions.

In addition to psychological support, MSF is also helping to refurbish the Ayotzinapa School, which is in rather poor condition.

“The centre was built to host between 400 and 500 students, but it is now stretched to the limit with nearly 2,000 occupants, including relatives of the victims, their classmates and students from other centres that have come to Tixla showing their solidarity,” says Bosch.

The MSF team has taken measures to increase and improve the availability of showers and toilets, and to eliminate as much as possible those areas with stagnant water as a result of the poor drainage system in the school building. Non-food-items such as mattresses, blankets or hygiene kits have also been distributed among the relatives of the 43 missing students.

MSF is carrying out several humanitarian projects in Mexico to provide care to the population affected by the direct consequences of violence: victims of assault and battery, forced migration, sexual violence, forced displacement or disappearances, all of which have an impact on the victims’ mental health.