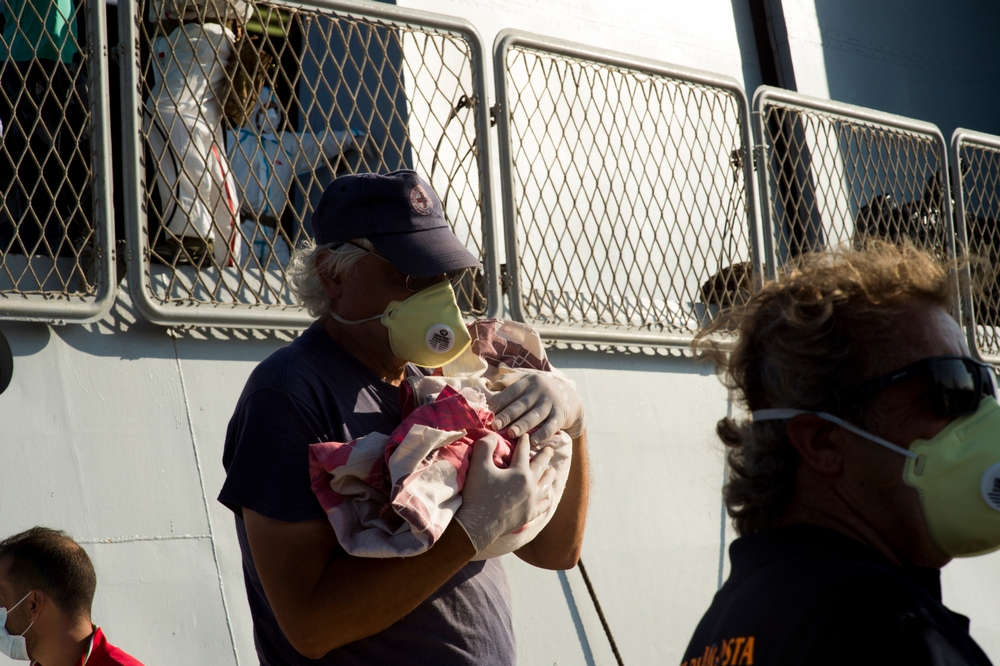 Doctor Chiara Montaldo is coordinating Médecins sans Frontières/Doctors Without Borders' (MSF) efforts in Sicily to provide medical and psychological care to migrants rescued from boats in the Mediterranean.

Our team is tired out after working day and night. The reception centre in Pozzallo was designed for just 180 people. Some of those arriving crossed the sea in rubber dinghies, others in wooden boats, but not one of the vessels were safe to travel in.

Boats arriving from Turkey and Libya

The boat that arrived on Sunday night had set off from Turkey, and was carrying young men from Syria, Palestine and Egypt. This was one of the better boats, and so the people were in a better medical condition – Syrians generally travel in better boats, because they are able to pay more.

But the boat that arrived two days earlier had come from Libya, and was carrying mostly people from African countries – from Nigeria, Gambia, Mali, Eritrea and Somalia – many of them families with young children.

Ikram N'gadi
Women at the lower deck of My Phoenix waiting to disembark in Pozzalo, Italy.

The migrants from Africa often arrive with ulcers and chemical burns from the petrol that floods the boats’ holds. They may also have skin diseases, like scabies and lice, from being held in detention centres in Libya, often for six or eight months at a time.

Others have wounds from being tortured or being victims of violence. A couple of people have arrived with gunshot wounds – they told us that in Libya it is anarchy, and you risk being shot every time you go out in the street.

The medical conditions we see reflect the migrants’ trip across the sea, but also what happened to them before: the detention centres, the journeys across the Sahara, the countries they’ve fled from.

Sometimes the migrants are on a ‘mixed boat’ with two decks – Syrians on the upper deck, Africans in the hold. They tell us that if the rescue boats see migrants who are white, it is more likely that they will be rescued.

When the migrants get onto a boat, they know that some will die, some will survive. Most are very clear about the risks they are taking, but they are prepared to take those risks because what they are leaving is so bad.

Ikram N'gadi
Pregnant woman on the deck of MY Phoenix arriving in Pozzalo, Italy.

A long and treacherous journey

The journey from Libya takes three or four days. They are very hungry when they arrive – often they have water to drink on the boat, but rarely food.

But still, many arrive dehydrated, as well as completely exhausted. With hundreds of people crammed together in the overcrowded boats, many suffer from body pains.

The survivors of shipwrecks are always in a far worse condition, psychologically as well as physically. They’ve usually swallowed lots of salt water and are suffering from respiratory diseases as well as mental trauma from having been in the sea and having seen their companions die.

Before last year, most of those making the journey across the Mediterranean were young men. But now they are people of all ages. Whole families arrive, with grandparents and young children.

Last week there were two babies, one eight days old, the other four days old, both born in Libya just before the boat departed.

The elderly people bring with them different medical problems, such as diabetes and hypertension. We are also seeing more and more unaccompanied children – usually teenagers from 13 upwards, making the journey alone, without their parents.

The Syrians bring some possessions with them – a bag of clothes perhaps – but the migrants from African have often been travelling so long to get here that they arrive without anything, not even shoes.

When they disembark at the dock, the MSF team is there to greet them, alongside the uniformed police and officials. Many migrants have experienced torture and violence at the hands of military men in uniform, so to be greeted by more men in uniform can be scary for people who already have so much reason to be scared.

That’s why it is so important that we are there too.

MSF is a friendly and often familiar presence for many of them. One guy who arrived from Palestine recognised our logo from being treated at our clinic in Gaza. A woman who arrived from Egypt had worked for us in Cairo as a translator.

Landing is a dramatic moment, but it can be a positive one. They are tired and hungry, but at least they are alive. Many say how happy they are to be here.

After landing, the migrants come to the triage tent, where we screen them for tuberculosis and chronic diseases and find out about their medical condition. We are usually the first people they’ve talked to in Sicily. Often they ask, “Where are we?” and “What will happen now?”

In return we ask where they are from and how the journey went. The replies can be shocking.

A 19-year-old Nigerian woman with chemical burns over her body told me how the hold of the boat in which she was travelling was awash with petrol mixed with salt water. Two people swallowed some by mistake and died; she didn’t know what had happened to their bodies.

I worried about how young she was, and what would happen to her next. We know that Nigerian women are frequently the victims of trafficking and are forced into prostitution.

There are so many women travelling alone – we would like to do more to protect them. But we see them in the reception centre for a few days, and then they are transferred on and we lose them.

I've just landed in #Sicily. They gave me a bracelet with a number. But my name is Omar, 10 months old, from Niger pic.twitter.com/YUrnsV5MQ4

The emotional impact of migration

After a few months, the stress of the trip and their worries for the future can lead to depression.

For anything between three months and a year, while the migrants wait for their asylum claim to be decided, they can’t work, they have nothing to do, and they can feel very isolated. Our psychologists are here to provide them with counselling and mental healthcare.

The lucky ones who get asylum can go on to work or study, but finding a job isn’t easy, especially if you don’t know the language well. And there are all the others who don’t receive any form of protection, and remain illegally, many drifting into the criminal underworld or prostitution.

The world’s attention is focused on the sea, but rescue operations alone can’t solve the situation. Europe needs to open the door and allow desperate people to find protection legally, without having to risk their lives in the process.