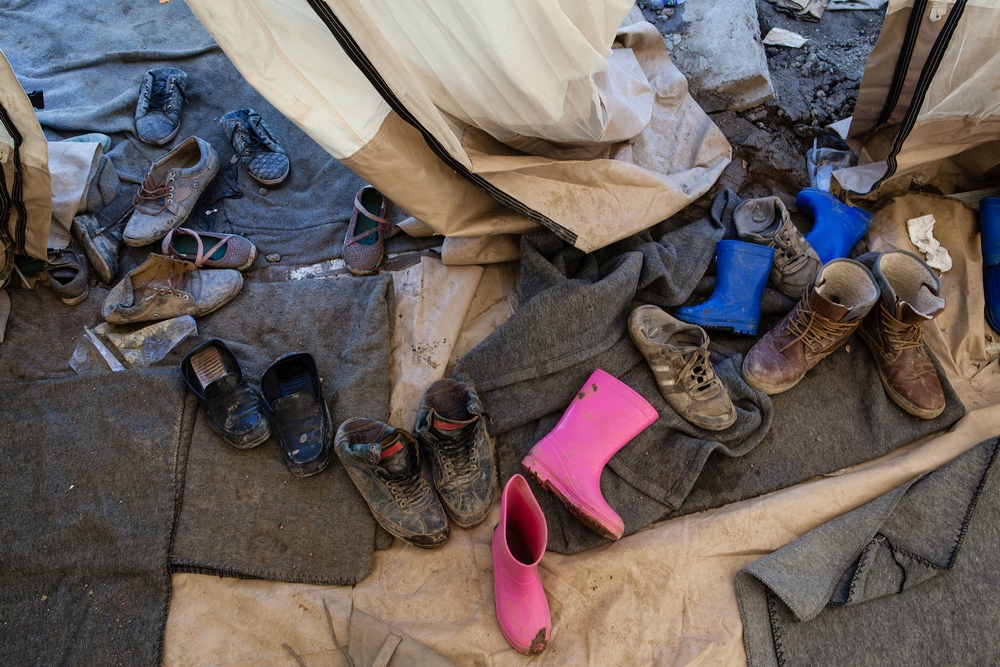 Refugee crisis: Why the EU’s deal with Turkey is no solution

"The proposed deal with Turkey shows once again how European leaders have completely lost track of reality.  If this cynical agreement is implemented, for each Syrian that risks his life at sea another Syrian will have the chance to reach Europe from Turkey.

"This crude calculation reduces people to mere numbers, denying them humane treatment and discarding their right to seek protection in Europe.

"These people are not numbers, but men, women, children and families. Around 88% of those using this route are coming from refugee producing countries, and more than half of them are women and children. They should be treated humanely and in full respect of their rights and dignity.

Thousands of lifejackets discarded when those fleeing across the Aegean Sea made it safely to shore in Lesvos. They are collected in a rubbish dump near Molyvos in the north of the island. © Giorgos Moutafis / MSF

"We are already seeing regular violations of people’s dignity in daily basis in Greece and across the Balkans: arbitrary push-backs, violence at borders, inhumane reception conditions.

"Despite what the EU council might say, a plan that aims at stopping these people from seeking asylum in Europe and returning them massively to Turkey - a country that is already hosting close to 3 million registered refugees – is likely to produce additional humane suffering and is also completely unrealistic.

Alex Yallop/MSF
One year old Nabak is treated by Medecins Sans Frontiers (MSF) Doctor, Cecile van de Konijnenburg inside the MSF clinic at the transit camp at Idomeni, on the Greek - Macedonian (FYROM) border. He is suffering from malnutrition and gastronomic problems.

"The response cannot be to turn our back on thousands of people who have fled war and persecution, create a humanitarian crisis in Greece and cash money to solve the problem.

The situation in Greece

"Europe seems to hope that the creation of another humanitarian crisis, this time in Greece, will deter others from coming. This is shortsighted and cruel. The existing infrastructure in Greece is already overwhelmed and as we speak, more than 40,000 men, women and children are currently stranded in the country.

"At least 12,000 of them are at the Greek-FYROM border in Idomeni where our teams are seeing dramatic scenes of children born on Europe’s soil and sleeping in the cold of a tent. The fragile efforts, mainly at the hands of humanitarian organisations and volunteers, to improve shelter capacities will be completely in vain if hundreds of thousands end up stranded in Greece.

Alex Yallop/MSF
Seven Syrian families sleep together in this 42 sqaure metre tent provided by MSF to increase the commodation capacity of the transit camp at Idomeni, Northern Greece.

"With these new plans, the EU is only trying to alleviate the humanitarian consequences of its members' irresponsible actions. EU humanitarian aid is becoming a tool for Europe to “contain” refugees and migrants away from its shores. This is unacceptable. Humanitarian assistance should be based on needs, not on political agendas and it will never represent an acceptable solution to the failure of European governments to adopt humane migration and asylum policies.

"The EU-Turkey proposed deal, presented as “the” solution to the so-called “crisis” affecting Europe , is a perfect illustration of this dangerous approach. The Voluntary Humanitarian admission scheme put forward for Syrians in Turkey is not based on refugees’ needs for assistance and protection but on Turkey’s ability to stop “migration” to Europe. At a time when millions of people in the world are displaced, it is shameful that the only safe passage offered by the EU is conditional to the number of people they can send back.

Alex Yallop/MSF
Iwath from Mosul Iraq outside a reception centre - 'We want freedom and future, we don't have freedom in my country, I want to continue my journey, I cannot go back'

The lack of safe and legal channels

"Our experience clearly shows that despite hastily built fences and barbed wire, people will continue to find ways to reach Europe.

"While European leaders continue to focus on the wrong strategy, they are only exacerbating the causes of their own policy-made crisis: the lack of safe and legal channels forcing people to sea and into the hands of smugglers and the “first country of entry” rule putting unfair pressure on southern European countries and forcing people to transit on unsafe journeys through Europe.

"There has been no response to these highly problematic deficiencies. Relocation, a safe way to exit Greece and its dysfunctional asylum and reception system, is not functioning. Only 937 asylum seekers have been relocated out of the 160.000 promised and only 4.555 resettled out of 20.000.

"The EU-Turkey deal and the deployment of EU humanitarian aid to Greece will be no quick fix to the need people have to find safety and protection in Europe. It is time European governments start facing reality and provide a responsible, common, humane and dignified response to people’s unstoppable search for protection and a better life for themselves and for their children, by providing a  safe passage for those in need in dignity."

Find out more about MSF's response to the refugee crisis