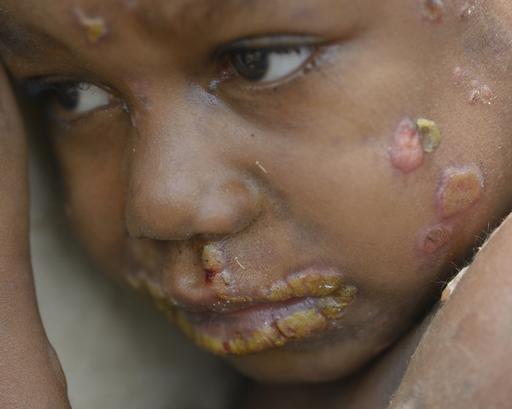 The Aka Pygmy communities living in northern Congo have been ostracised in their home country for many years. They have almost no access to healthcare and, as a result, are still affected by the neglected disease known as yaws.

Médecins Sans Frontières/Doctors Without Borders (MSF) recently carried out a campaign for treating this disease, which turned out to be both a logistical feat and a world first in medical terms.

It was while carrying out medical consultations in the district of Bétou in the north-east of the country that MSF’s teams discovered cases of a forgotten disease among patients from the Aka community.

A recent discovery that a single-dose of azithromycin (given orally) can cure the disease has raised the prospects of eradicating yaws altogether.

Yaws ravaged Africa during the 1950s and a series of mass treatment campaigns didn’t manage to eradicate it altogether. “The disease persists in certain inter-tropical zones. Without treatment, it can attack bones, cartilage and joints and cause permanent disfigurement.”

MSF decided to go and find these Aka communities and treat them in their home environment: the heart of the forest. The treatment campaign represented both a first in medical terms and a real logistical challenge.

“It was the first time the new treatment recommended by the World Health Organisation had been used”, explained Matthew Coldiron. “A single oral dose of the antibiotic azithromycin is all it takes to cure yaws. And as humans are the only reservoir of infection, we can eradicate the disease by treating all the existing cases.”

The treatment strategy was a logistical headache, with more than 20,000 people spread over 100 villages.

Putting this strategy into practice was a logistical headache. The teams had to travel on foot, in pirogues or 4x4 vehicles to reach around 20,000 people scattered across a hundred or so villages. The campaign was run in two stages, September and October, and, over these two months, treated 17,400 people for yaws.

The MSF teams also took the opportunity to provide some basic care (treatment for malaria and intestinal parasites and the cleaning of wounds) and vaccinate the children against measles. An epidemiological survey was carried out at the same time to determine the prevalence of the disease in the children.

“We are the first to use this new strategy. The idea now is to communicate on our experience with this disease and this new treatment, and also on the means needed to reach these isolated populations in the forest,” concludes Matthew Coldiron. “We hope that other actors will follow in our footsteps, as yaws is still present in other countries.”

The results of this campaign and of the epidemiological survey will be shared with the local authorities in the Congo, as well as with WHO and all the actors who could help eradicate this disease.