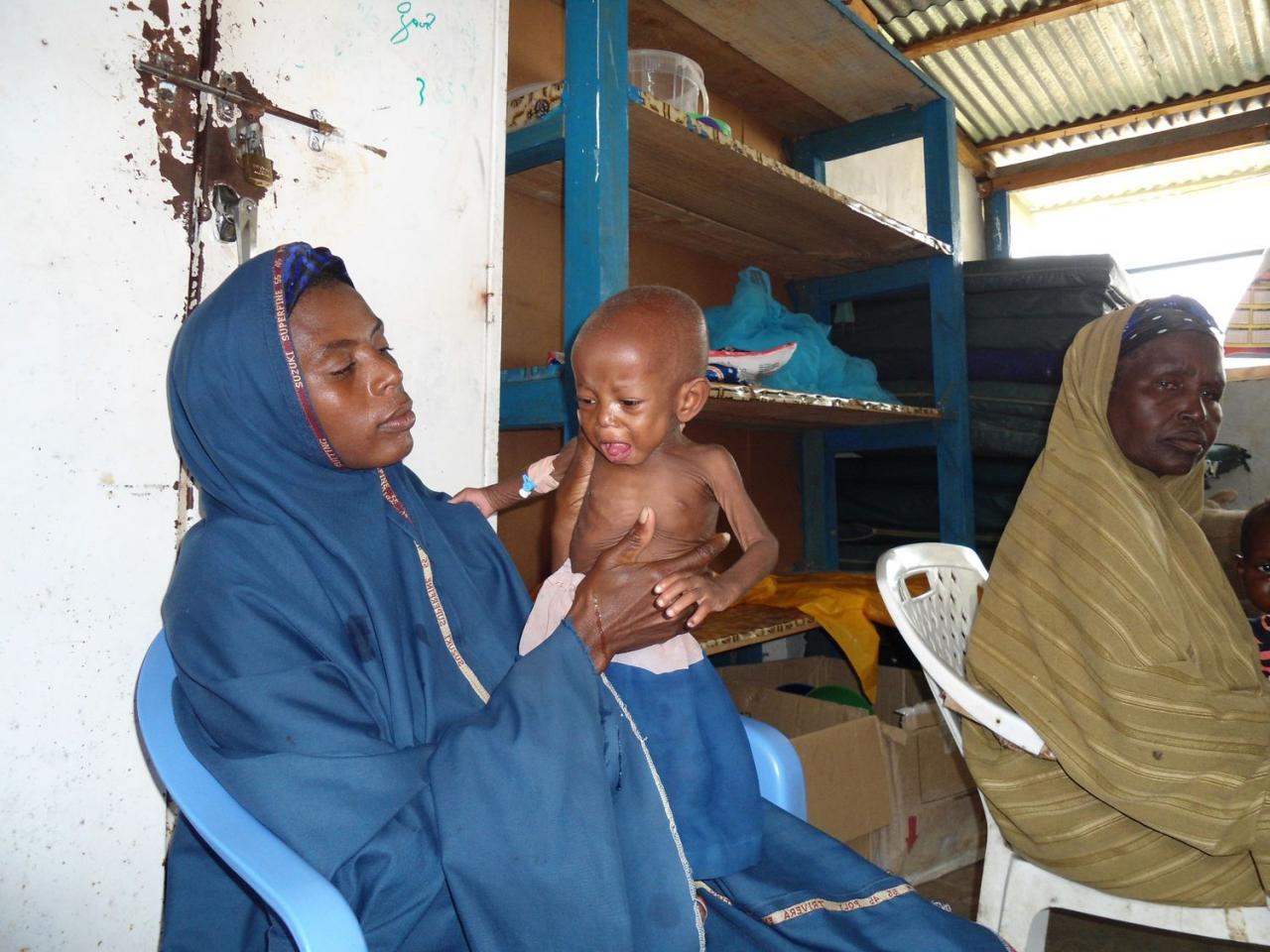 Somalia "MSF is the only help here"

The drought has affected us badly. Marere use to be a farming area but there has been no harvest now for more than two years. You can see the effects of the drought right here in our hospital, where numbers of patients in our inpatient feeding centre have doubled. Last night, 80 under-fives with severe malnutrition stayed in the hospital, while we are treating a further 443 children as outpatients.

There are many others who are simply in the hospital because they have nothing to eat and nowhere else to go. They are malnourished and destitute, and they come here to be fed and to be treated – free of charge, of course. There is a lot of hunger and destitution as a result of the drought.

"...most of his skin has cracked as a result of the malnutrition"

The past two weeks have seen increasing numbers of children coming to the hospital in a bad state. Most have travelled very long distances, which has only made their situation worse.

Some of the severely malnourished children have bodies so swollen you’d think they were about to burst. We rescued one young boy, who was just one year old, from the town of Dinsor, 160km from the hospital. We sent our car to collect the child and his mother, and when he was brought to the hospital he was in an unbelievable state: he had swelled up and most of his skin had cracked as a result of the malnutrition. As you can imagine, his mother was not expecting much, but we didn’t give up on him.

It is now four weeks since we brought him here and his skin is healing, the swelling has subsided and he is healthy and very happy. His mother is over the moon, as any mother would be. And this child is not alone; we see so many cases like this every day that I can’t even remember all of their names.

We are also seeing severely malnourished pregnant women in our maternity department. On top of that, we are seeing between 250 and 300 people – not including children – in our outpatient department every day, most of whom are malnourished. Unfortunately many also come to us with secondary illnesses, to which malnutrition has made them particularly susceptible.

In the hospital, the other departments are also overflowing with patients. In the 30-bed inpatient department, we have 43 patients, 23 of whom are under five. And in our TB department we have another 131 patients.  We also have outreach centres in the area, where we are currently treating 112 children under the age of five. In a town 38km from our hospital we have another outreach centre where 50 under-fives are receiving treatment.

"...you hear stories of parents having to leave their children on the side of the road"

One of the many places our teams visit is Jilib, which is 18km away, where there is a camp with more than 1,400 internally displaced people, most of them women and young children. When you speak to the mothers and the few fathers there, you hear stories of parents having to leave their children on the side of the road because they were too malnourished and weak to walk any further. We are the only help they have – there are no other groups or organisations helping these people. When we go there we act both as a clinic and a feeding centre.

Recently MSF handed out plastic sheets for making temporary homes, mosquito nets, because the area is filled with mosquitoes, and soap, to more than 1,201 families. Now they have some protection from the heat of the sun and the chills of the night, and can rest in the shade without mosquitoes feeding off them.

MSF is the only help here

Our hospital here in Marere is a large one, and we do much more than just treating patients. We assist in any other way we can and, because people hear what we doing, the numbers increase and people come from far away for help.
MSF is the only help here, and we help everyone, no matter what. If MSF wasn’t here, the situation would be extremely dire. It’s possible that no one would be left alive, as all those that could escape would have run away, and the rest would simply have perished.