26 July 2021 – Cases of hepatitis E are spreading across camps in Gedaref and Kassala states, Eastern Sudan, infecting hundreds of refugees from Tigray and posing a risk to local Sudanese communities.

In the past few weeks, MSF medical teams in Gedaref’s Umm Rakouba camp and Al Hashaba/Village 8 transit centre have received 278 patients, of which 16 were hospitalised, including three pregnant women. 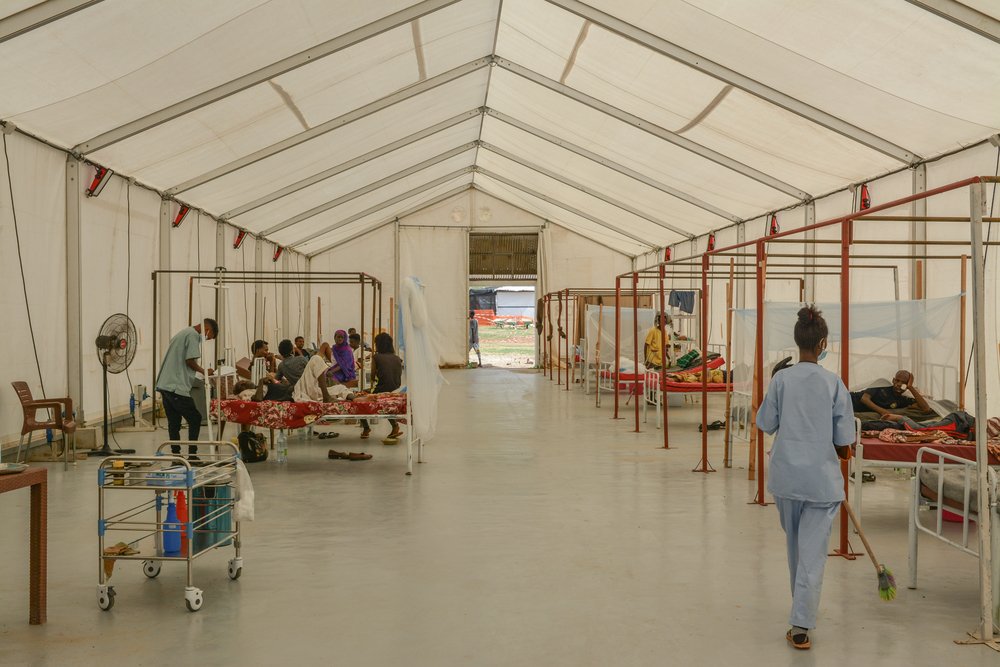 Many patients have acute jaundice syndrome, a tell-tale sign of the virus, vomiting and epigastric pain. 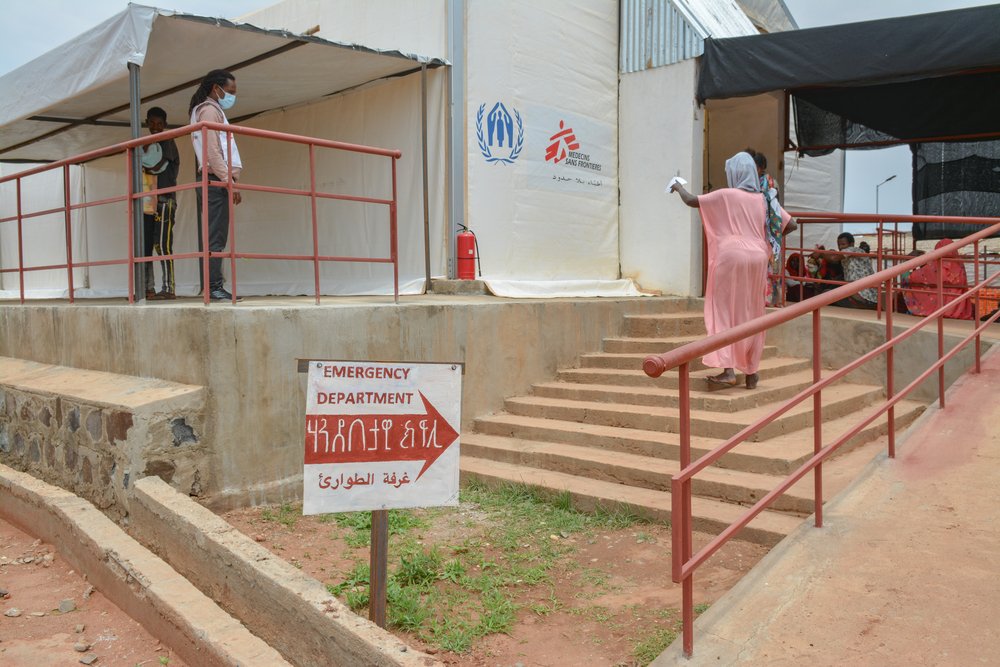 MSF/Dalila Mahdawi
The exterior of the emergency department at MSF’s medical facility in Umm Rakouba camp for Tigray refugees.

Hepatitis E is a contagious virus that causes liver disease.

It noticeably yellows the eyes and skin, causes fatigue and dark urine, and can lead to acute liver failure and death. 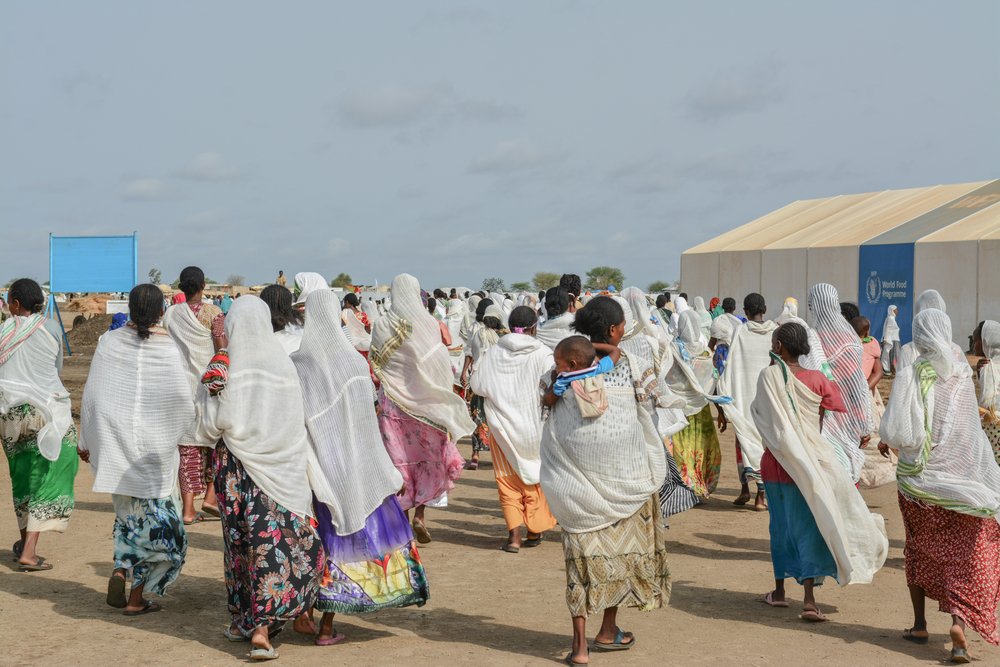 MSF/Dalila Mahdawi
Women walk behind the coffin of a woman being taken for burial in Al Tanideba camp. MSF has been treating a growing number of hepatitis e cases in the camp, as well as in Umm Rakouba and Al Hashaba/Village 8 transit camp.

It is particularly dangerous for pregnant women, for whom the risk of death is about 25 percent.

Some of the patients treated by MSF for hepatitis E have arrived comatose.

As with other diseases like typhoid, dysentery and cholera, the hepatitis E virus thrives in environments with poor water and sanitation conditions. 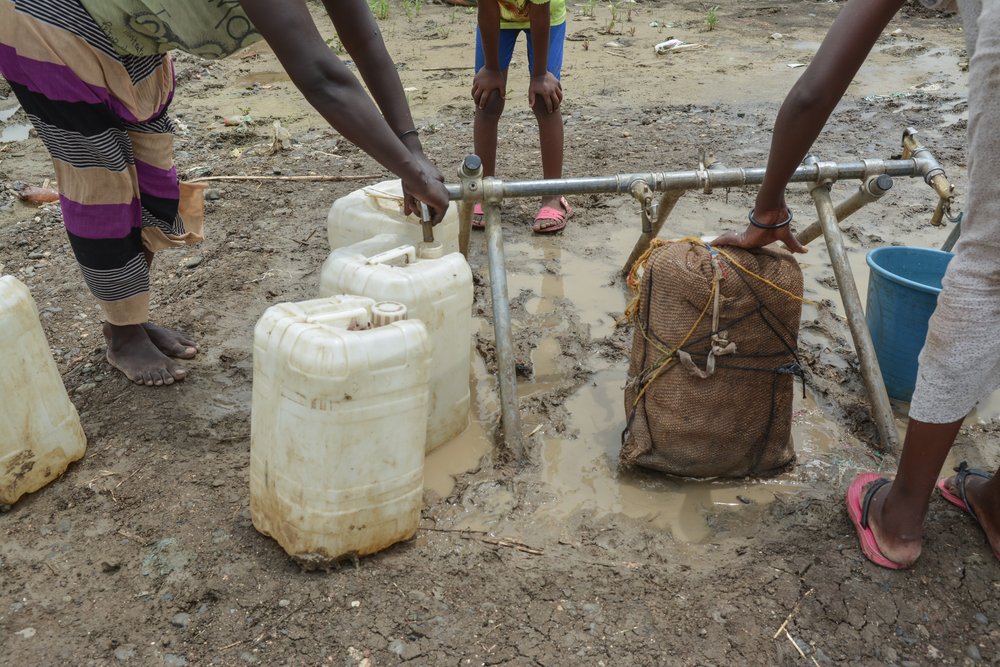 MSF/Dalila Mahdawi
Tigray refugees in Al Tanideba camp fill their jerry cans up at a tap stand. Heavy wind and storms have destroyed many of the camp’s latrines, spreading contaminated water throughout the camp. Open defecation is widespread.

“Since day one, the humanitarian response has been two steps behind the needs of people here,” says François Zamparini, MSF emergency coordinator in Gedaref state.

“Early warnings about inadequate sanitation, hygiene and shelter were not heeded, and latrine and tap stand building has been far too slow. As a result we now have widespread open defecation in the camps. Tigray refugees are paying the price of poor international coordination with their health.”

"In Umm Rakouba, there are only 175 latrines for 20,000 people, while in Al-Tanideba many latrines have been destroyed by heavy rain and wind" 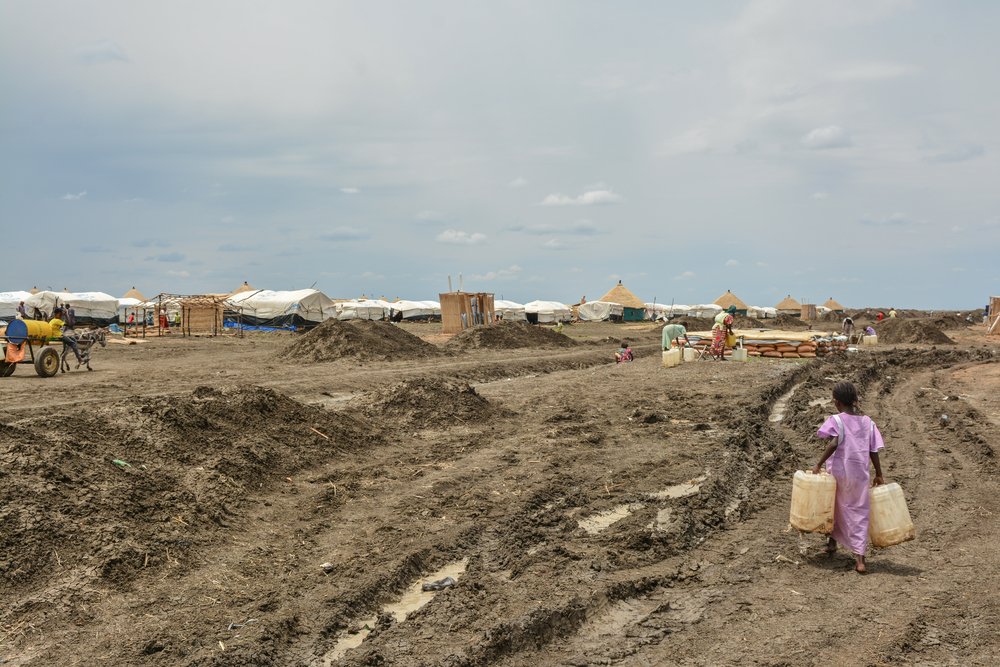 MSF/Dalila Mahdawi
A girl carries jerry cans to be filled at a water point in Al-Tanideba camp. In both Al-Tanideba and Umm Rakouba, latrines are scarce or unusable, which has led to widespread open defecation in the camps.

In both Al-Tanideba and Umm Rakouba, latrines are scarce or unusable.

In Umm Rakouba, there are only 175 latrines for 20,000 people, while in Al-Tanideba many latrines have been destroyed by heavy rain and wind.

Together the two camps host about 40,000 people. 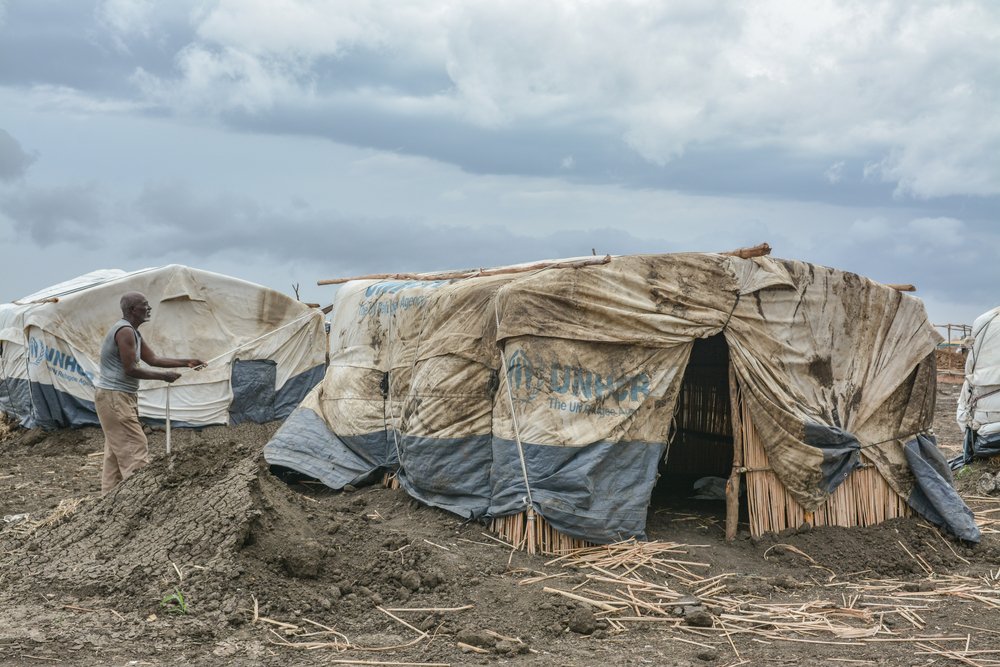 MSF/Dalila Mahdawi
A man in Al-Tanideba camp works to reinforce his shelter. Weeks of heavy rain and wind have destroyed many refugee shelters across the camp, contaminating water and food supplies.

Work is underway to build new latrines, but with the onset of the rainy season many won’t be ready for several months.

Some latrines are located right next to water points, increasing the potential risk of contamination.

This week, heavy rainfall flooded many parts of Al-Tanideba, making the situation even more acute. 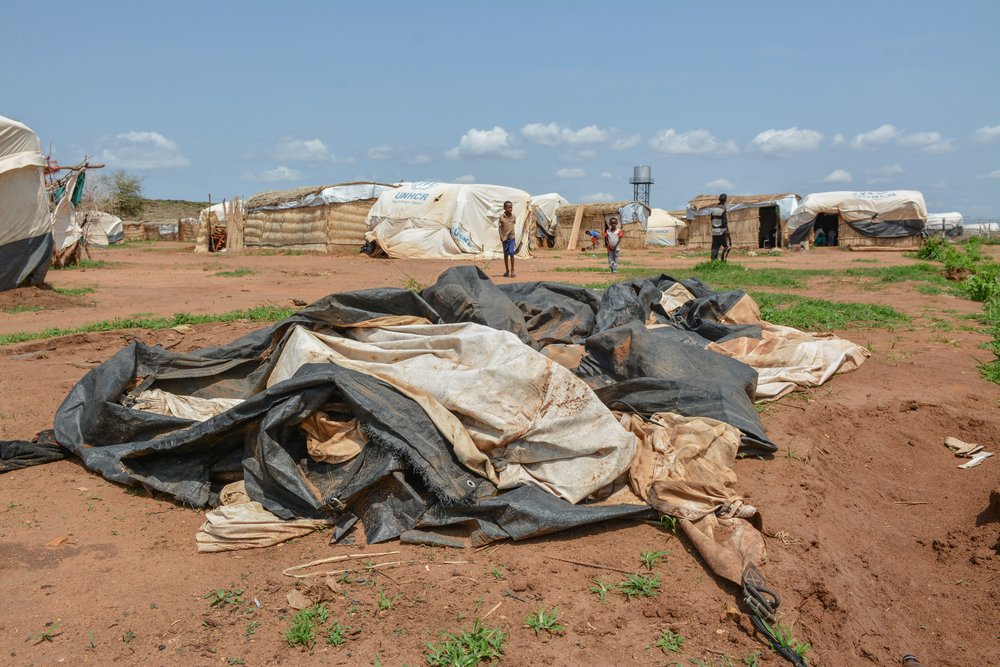 MSF/Dalila Mahdawi
Heavy wind and rain have destroyed a number of shelters across Umm Rakouba and Tanideba. These storms also ruined peoples stored food and caused flooding of or destruction of latrines.

Humanitarian actors must urgently increase the quantity and quality of latrines, particularly as the rainy season is likely to increase the spread of other waterborne diseases.

“The toilets have been a problem since we arrived,” says Mehrut, who lives in Al-Tanideba with her five children. 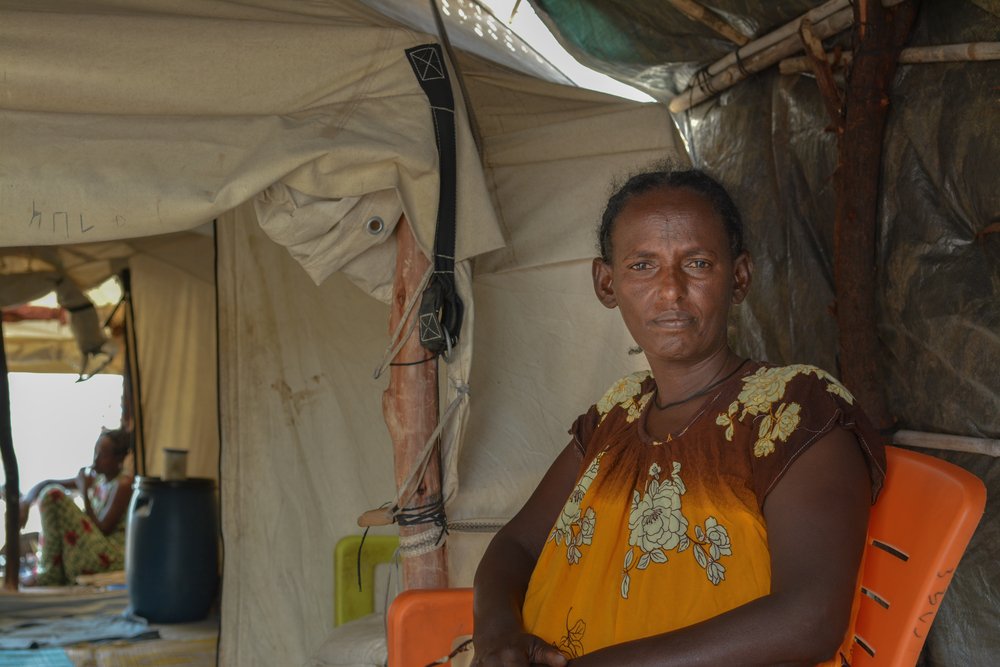 MSF/Dalila Mahdawi
Mihret Gereyginer sits in her tent in Umm Rakouba camp, Eastern Sudan. “It’s bad in the camps, because even the weather makes everything complicated. Our tent has been destroyed many times by the rain and wind..."

“They are never cleaned or maintained and we do not feel comfortable using them.”

Because food distributions have been erratic, many refugees have also resorted to selling their soap provisions in order to buy food. 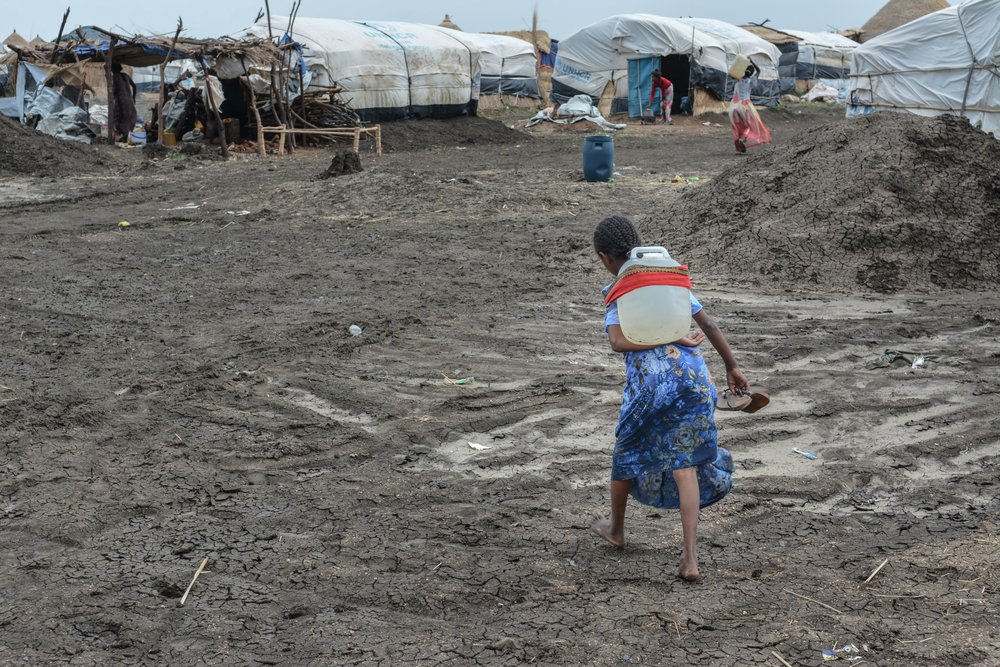 MSF/Dalila Mahdawi
A girl carries a jerry can of water back to her shelter in Al-Tanideba camp. In both Al-Tanideba and Umm Rakouba, latrines are scarce or unusable, which has led to widespread open defecation in the camps.

In response to the growing number of cases, MSF has raised chlorine levels in the water it provides, and taken measures to protect and disinfect boreholes under its management from dirty surface water. 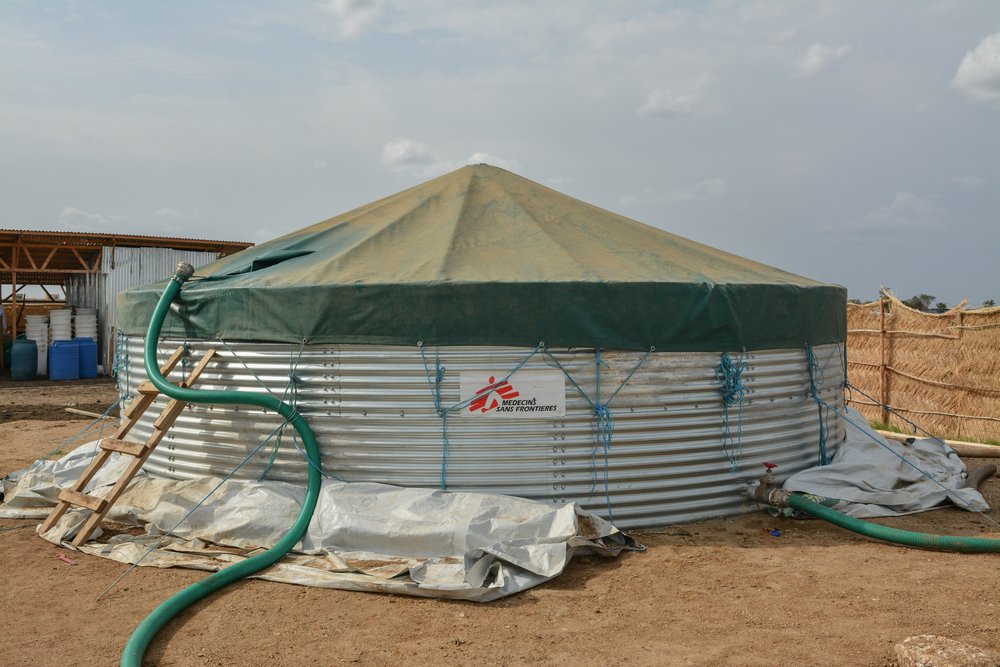 MSF/Dalila Mahdawi
One of the water tanks at MSF’s water treatment plant in Al Tanideba camp. MSF is treating water as an emergency measure to ensure refugees have clean water.

MSF has also increased health education and outreach in the camps.

This has included a jerry can cleaning campaign to ensure refugees can safely store their water. 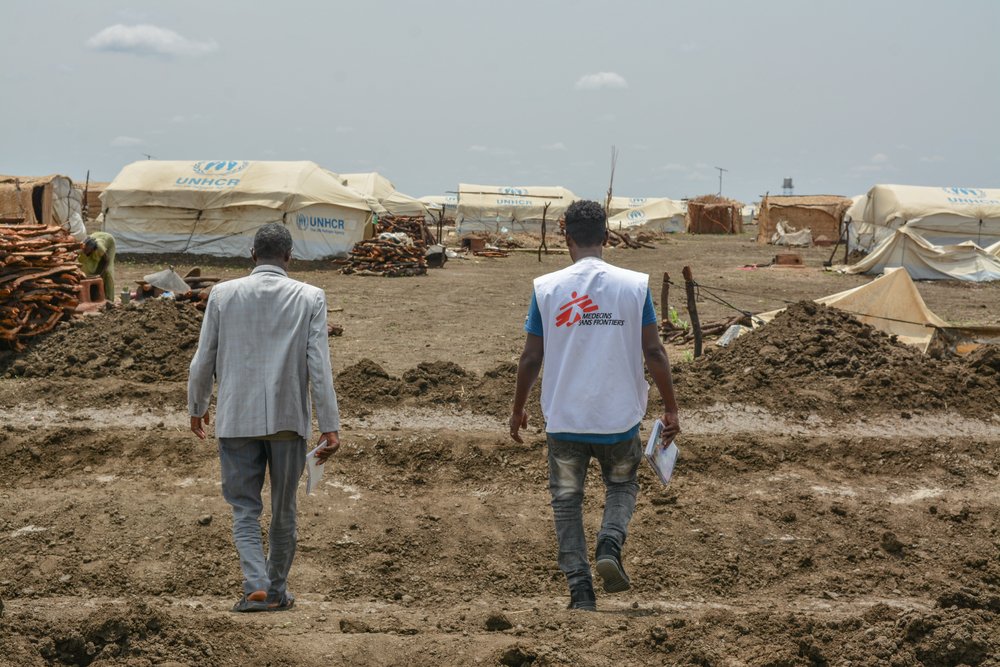 MSF is also following up with pregnant women, providing them with additional soap as a preventative measure.

“The spread of hepatitis E could have been avoided if the basic infrastructure had been in place on time,” says MSF project coordinator Sergio Scor. 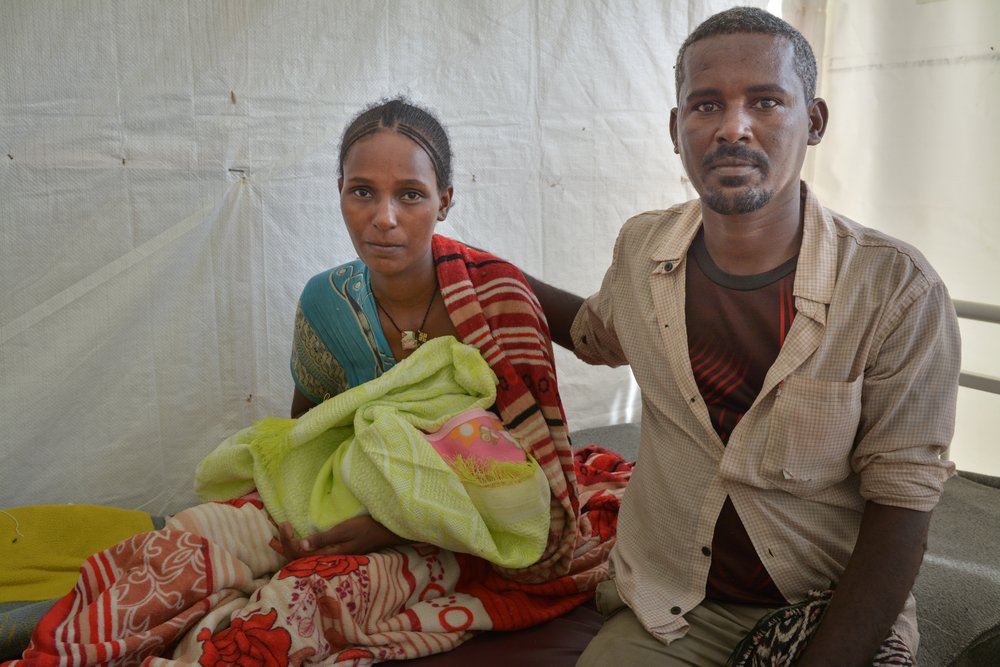 “Instead there has been a collective failure to provide dignified and safe services to a relatively small number of refugees.” 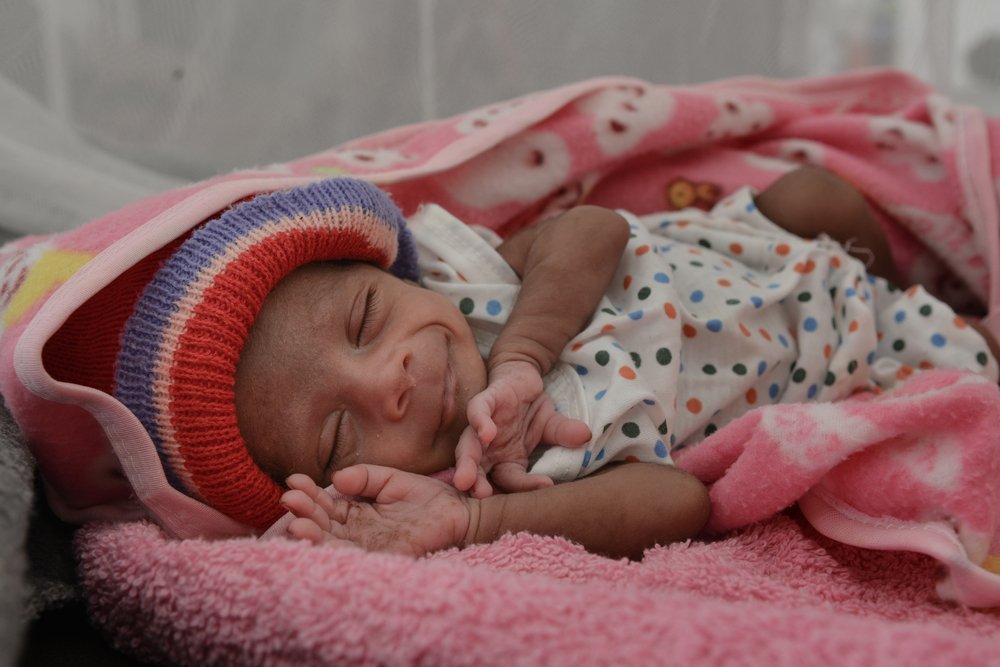