Surviving Gaza: The hopes and perils of living under blockade

Over one month since a ceasefire came into force between the Israeli government and Hamas, Palestinians in the Gaza Strip feel unsafe and fear another round of hostilities.

"There is a war here every few years"

Twelve-year-old Mohanned was in the car with his aunt on 11 May when an airstrike hit the neighbourhood they were driving through.

Mohanned survived the blast but sustained multiple injuries to his head, arm and abdomen from the shrapnel. 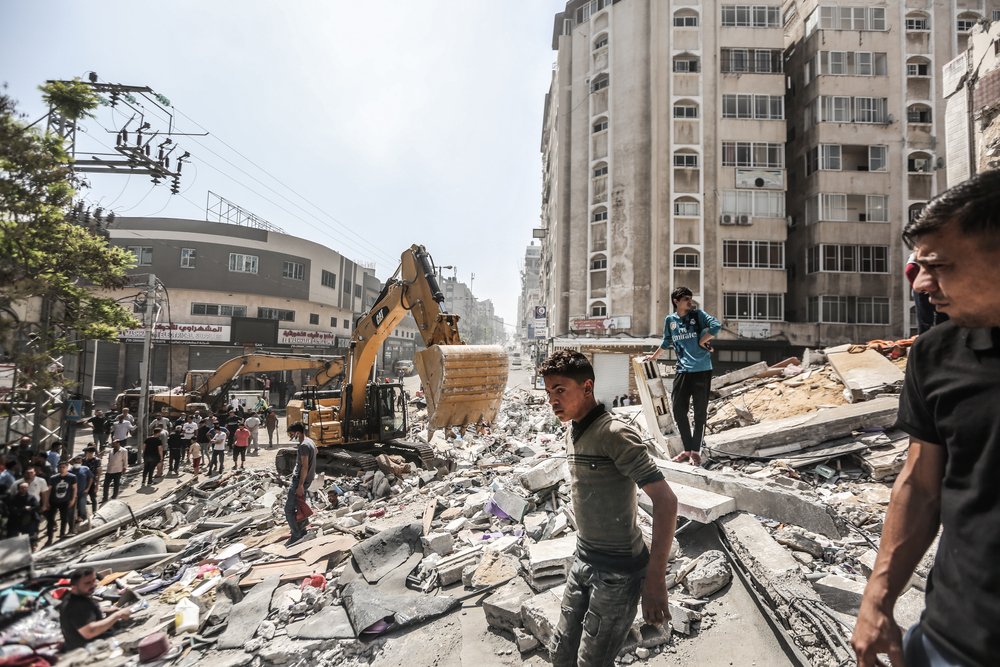 "We are used to this – it’s just life. We don’t cry over destroyed buildings anymore. Our children are our only worry."

“Look at him,” says his father, Elsabea Musabeh, lifting his son’s T-shirt to show wide layers of gauze dressing wrapped around Mohanned’s waist. 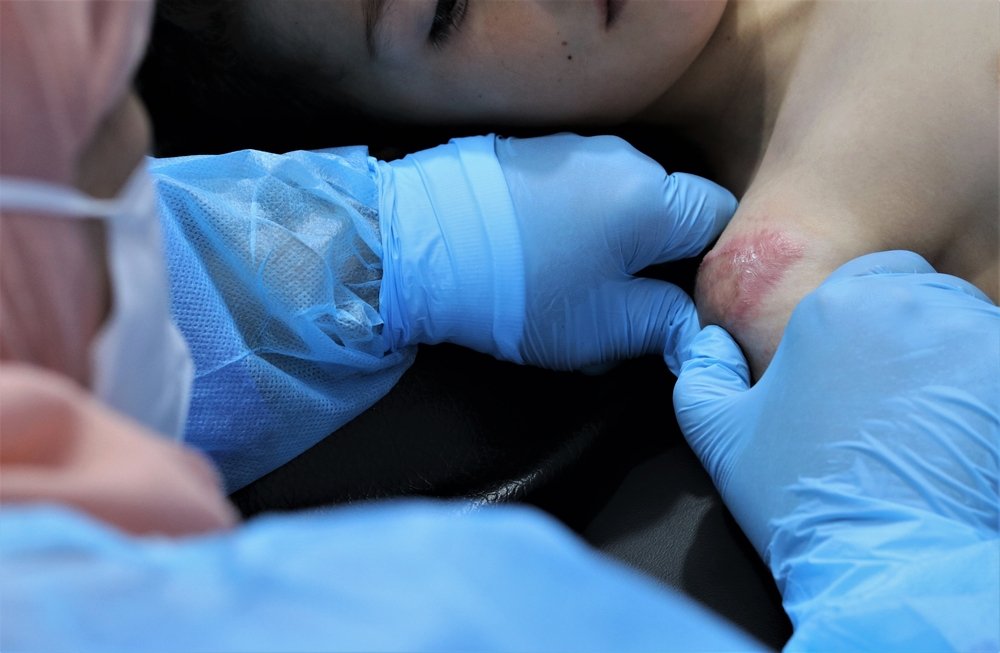 Tetiana Gaviuk/MSF
An 8-year-old Sajed receives a post-burn treatment in a physiotherapy room in an MSF clinic in the Middle Area, Gaza Strip.

“He is a child. What did he do to deserve this?”

“There is a war here every few years,” continues Elsabea.

“We are used to this – it’s just life. We don’t cry over destroyed buildings anymore. Our children are our only worry.”

It has been several weeks since Mohanned was discharged from hospital.

Some of his injuries have healed but the psychological trauma of the experience is still fresh.

He doesn’t like speaking about the incident as it brings back memories, says Elsabea.

For most Palestinians in Gaza, the 11 days of intensive Israeli bombardment in May was not the first time they had experienced airstrikes.

The mental trauma of fearing for your life, of seeing your home in ruins and of the economic hardship that accompanies such experiences has long-term consequences for many people, particularly when it comes on top of pre-existing trauma from previous rounds of violence and life under 15 years of blockade.

The latest offensive has made the mental health crisis in Gaza more acute and made it even harder for people to cope. 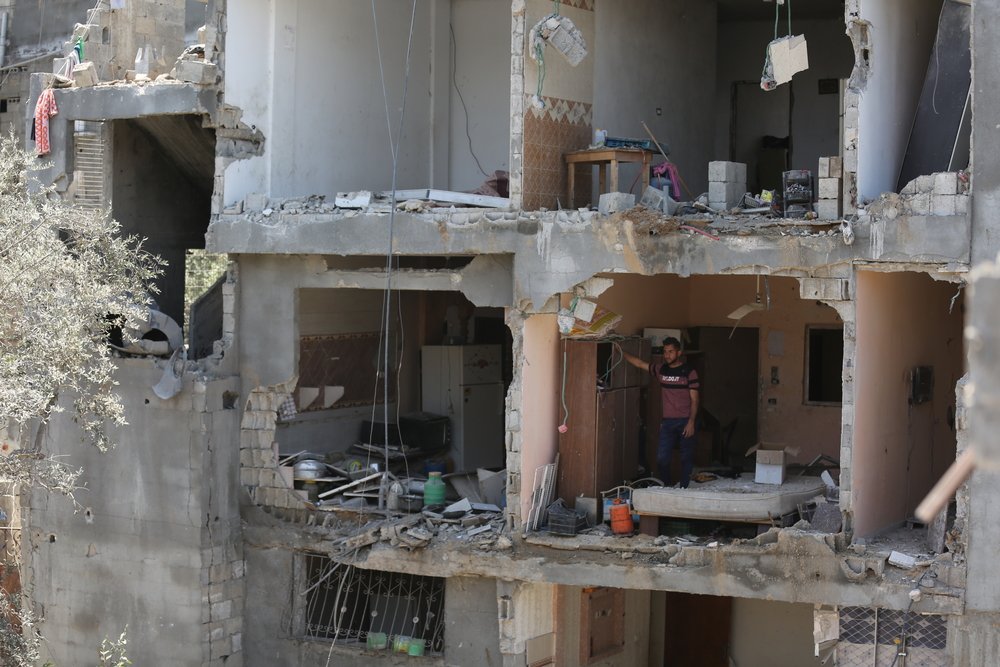 When her house was bombed at night, Salma Shamali, 36, her husband and their seven children only just managed to escape.

“We were all in one room. The children were sleeping. Then part of the house fell on us. We were confused. Nobody warned us or told us to evacuate.”

It took them several hours stumbling through the dark to reach the relative safety of a nearby bus station, where they took cover for five hours. From the bus station, they moved to a school. 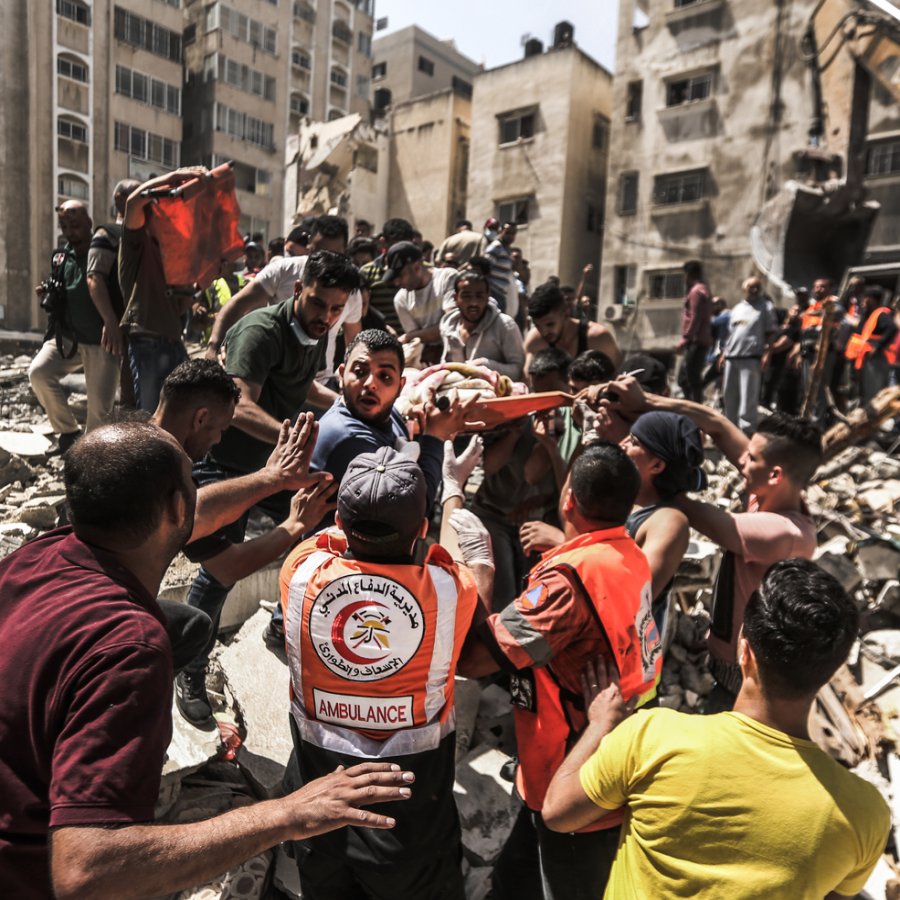 Palestinians rescue a person from the rubble after Israeli air strike destroyed the residential tower in Gaza city.

When the family returned home a week later, they found their house was badly damaged.

They have had to rent another house.

"Everyone in Gaza is affected"

Despite the ceasefire agreement last month, the Israeli government has launched airstrikes on the Strip on two occasions since then, and the piercing sound of drones in the sky over Gaza has not stopped. 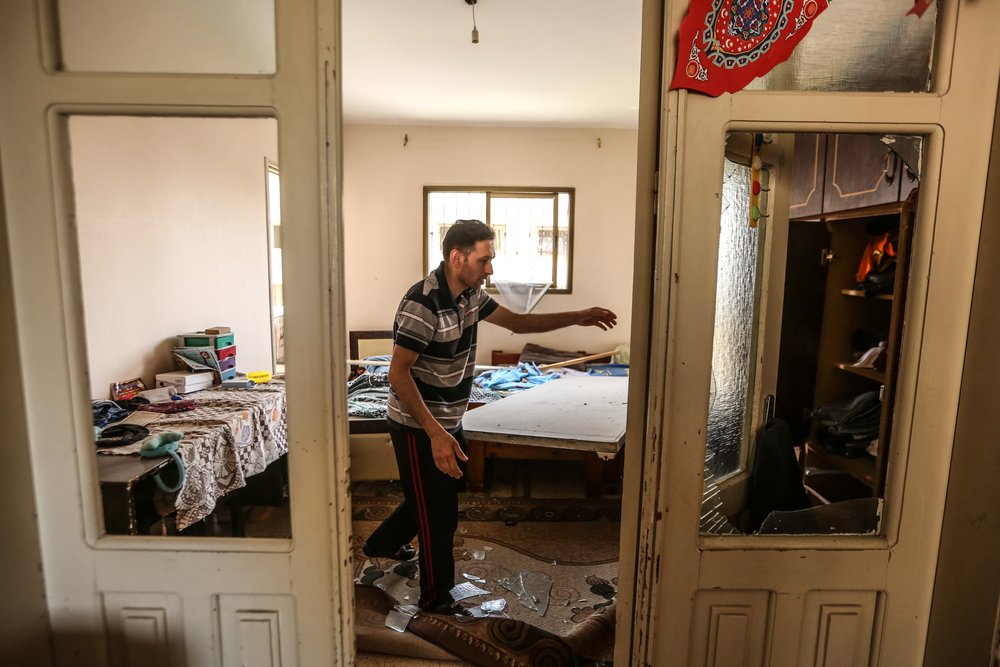 This noise torments people night after night, keeping them awake and alert. Salma’s children hide every time they hear it now.

“We don’t want war,” they say, crying. She tries to keep calm and not to lose hope. 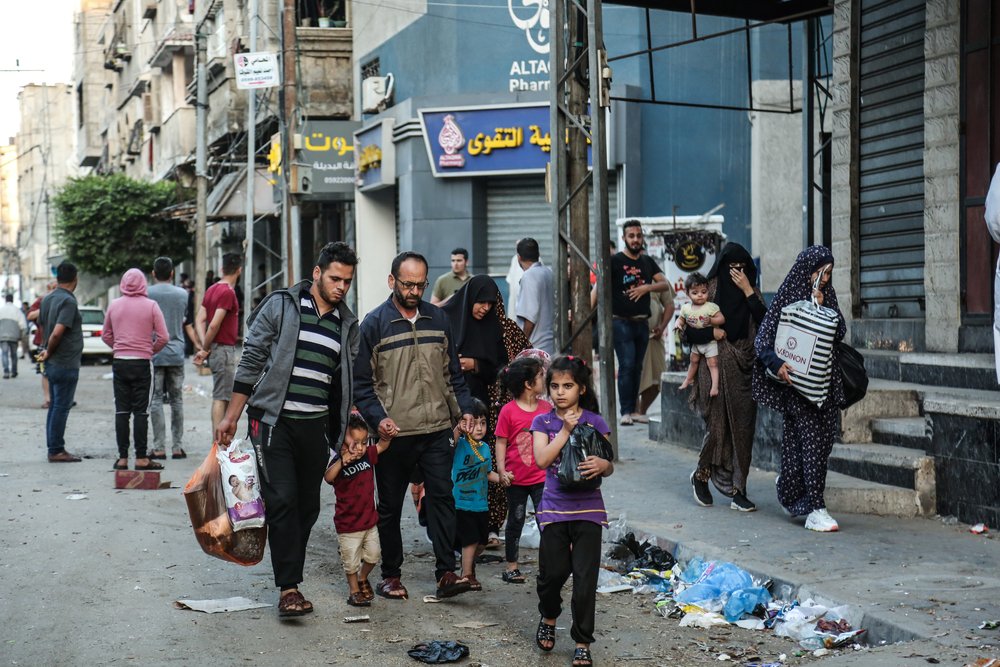 Fady Hanona
Children run on a street of Gaza city. Of the 2 million Palestinians living in Gaza, over 40 per cent are children aged 14 or under. These children have lived their entire lives under Israeli blockade.

Everyone is exposed to the causes of psychological trauma

Amira Karim, a mental health counsellor who provides psychological support to patients in MSF’s clinic in Gaza City, says that stories of patients affected by the recent bombings – and particularly stories of children – have triggered her own traumatic memories.

“I remembered the extreme fear of death,” says Amira. 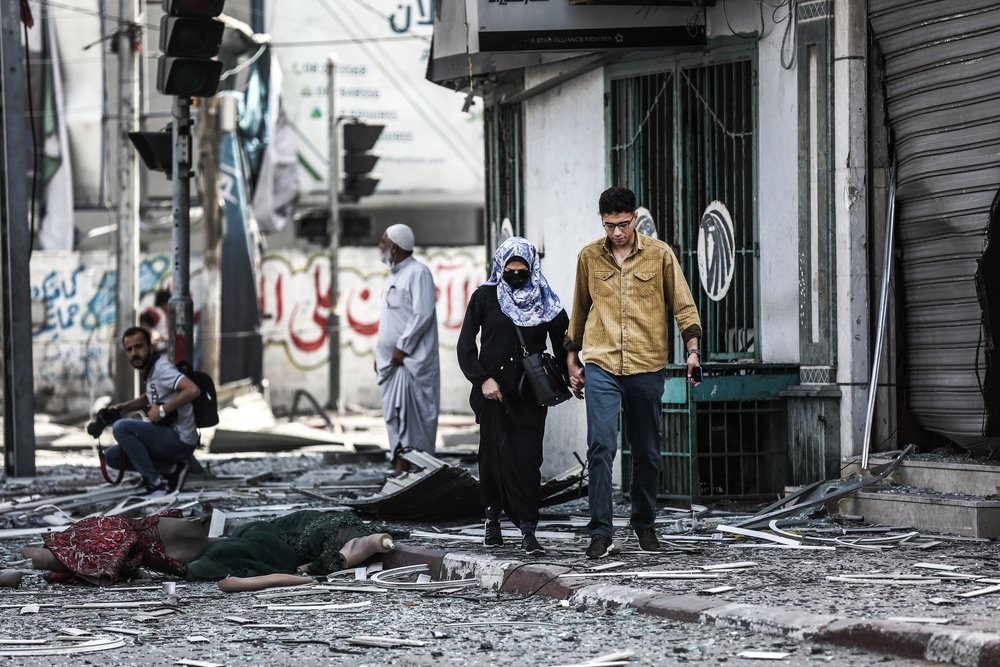 Fady Hanona
Palestinians walk amidst debris in Gaza city. 11 days of Israel’s intense aerial and ground bombardments has caused a huge impact on people’s lives in Gaza - people lost their family members, their homes and livelihoods.

“I remembered how my kids held me tight when bombs were exploding close to my house at midnight."

"It was like nothing we have lived through before. We felt like those were the final minutes of our lives.”

In Gaza, everyone is exposed continually to the causes of psychological trauma, including healthcare workers.

Their resilience is put to the test on a daily basis as they help others while exposed to traumatic events themselves.

“During the latest escalation of violence, I did my best to provide support to everyone I could reach – my patients, colleagues, friends and family,” says MSF psychologist Mahmoud Zeyad Awad.

“This was while living through the same experience myself and processing the loss of two of my friends. Seeing patients feeling better gives me strength to keep doing this job, but I’m afraid of failing my patients or of becoming a patient myself.” 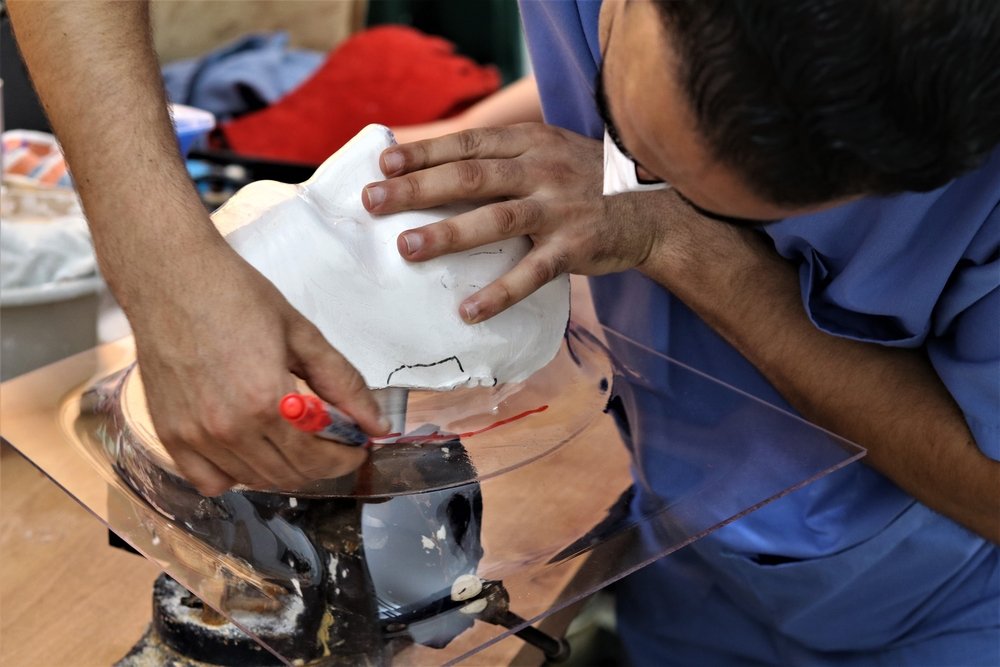 “Everyone in Gaza is affected,” says MSF psychiatrist Juan Paris.

“The number of suicides and attempted suicides rose steadily in 2020,” says Paris, “but they’re clearly under-reported because of the stigma around mental health issues in Palestinian society.”

To support patients, staff and their families, MSF has scaled up its mental health services in Gaza. 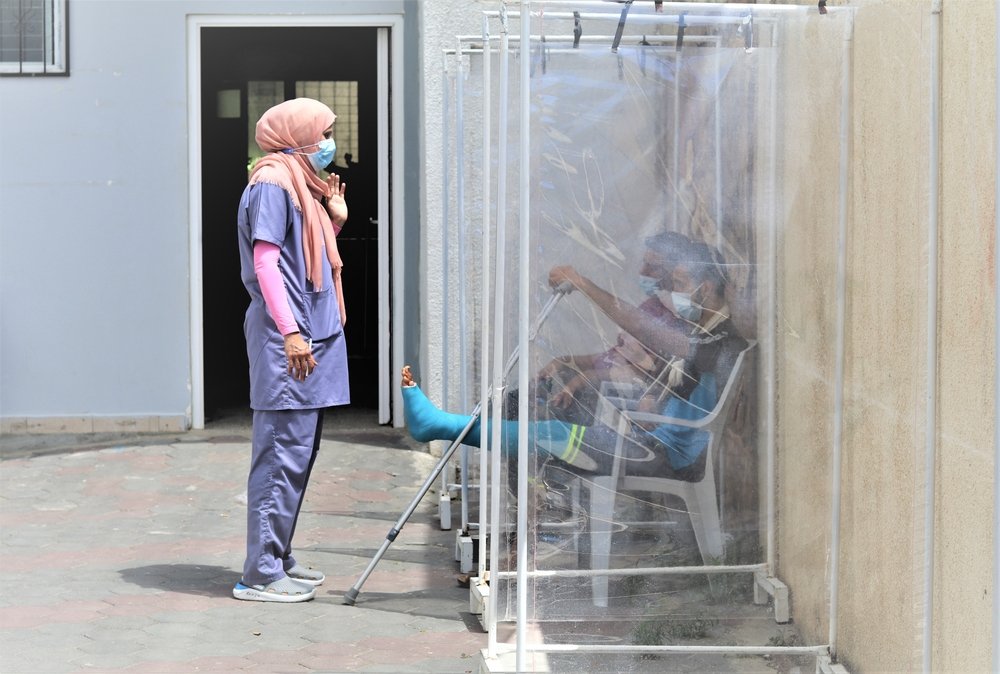 Tetiana Gaviuk/MSF
Rania Sammour, MSF mental health counsellor speaks with a 23-year-old male patient who was injured in an air strike in Gaza in May 2021 while he waits for a medical exam.

“Their resilience comes from a strong sense of commitment to their community, but it is being put to the test daily as they continue being re-exposed to trauma. They have to endure this to be able to help others.”