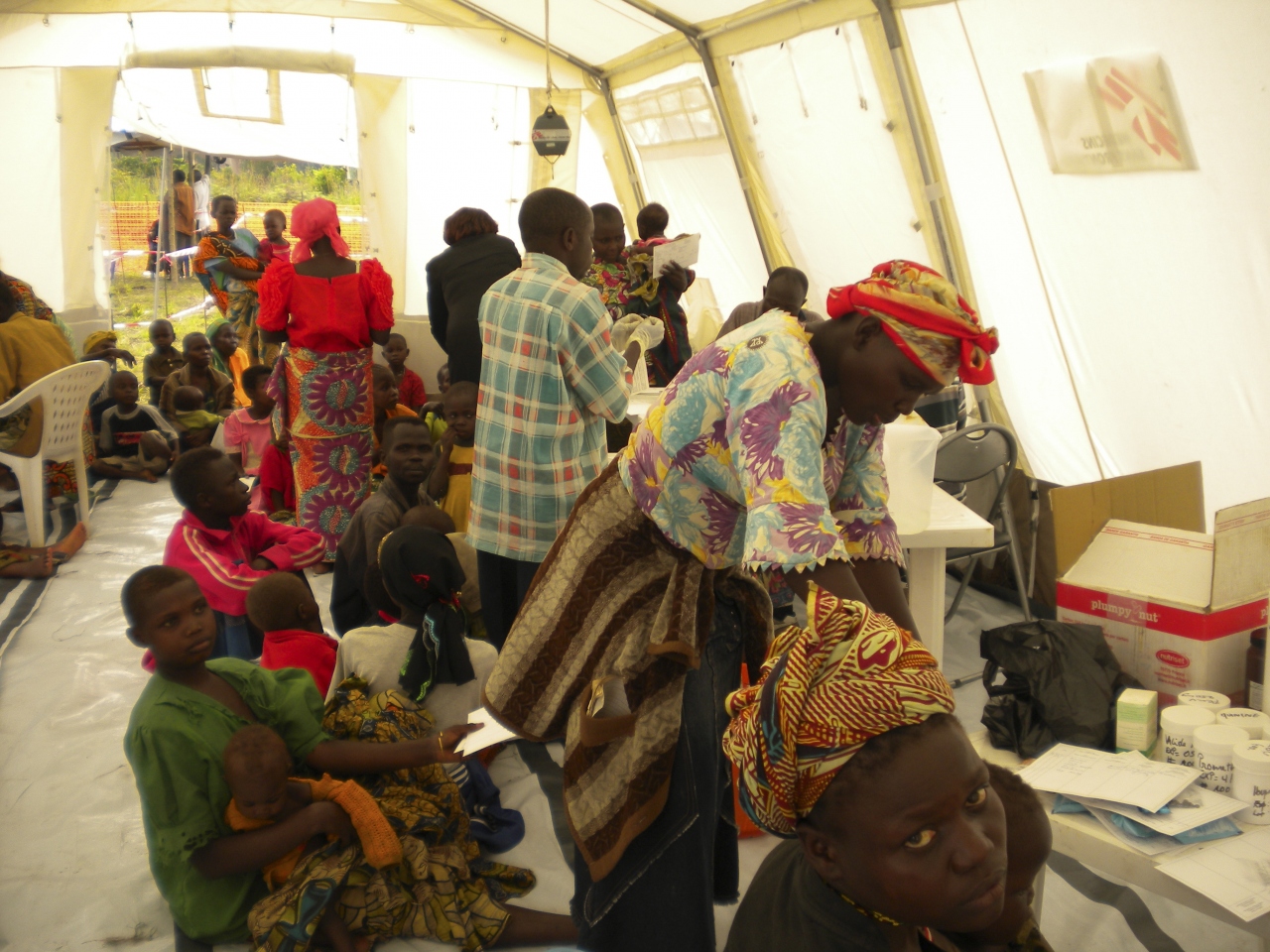 Since the end of 2009, thousands of civilians have found themselves trapped by the ongoing conflict pitting the military against other armed groups in southern Ituri in the Democratic Republic of Congo (DRC). Exhausted, some of the displaced have finally managed to escape the fire zone. By stealthily crossing front lines in small groups, they are able to reach Gety and Aveba, two small towns in Irumu territory where Médecins Sans Frontières (MSF) is providing them with emergency medical assistance.

“The majority of them were hungry and exhausted when we received them,” explains Laurence Gaubert, MSF’s head of mission in DRC. “We fear the worst for those who remain stranded. They can’t receive any help because they’re caught behind the frontline.”

Aveba reception camp: a tent has been setup to do medical consultation and provisionally hot the people arriving.

Ituri Has Not Put Its Demons to Bed

The turn of the century was a bad period for Ituri, one that introduced a sense of insecurity that has never really gone away. It remains tangible among a war-weary population that continues to have their lives shaped and their movements dictated by the greed and cruelty of warring factions.

“In Irumu territory, a significant part of the population is or has been recently displaced,” explains Elsa Moulin, an MSF coordinator based in Gety, where MSF is supporting a local hospital and several health centres.“People continue to put up with this violence with a kind of general sense of indifference, as the past history of injustice and impunity haunts their memories. It is events such as these that are happening now that make those on the outside start to realise that Ituri has not put its demons to bed.”

The latest episode of violence began last December, when the regular army launched an offensive against militias in the areas of Poto-Poto and Tchey. The militias, in turn, launched counter-offensives and thousands of civilians were ensnared in the ensuing fighting. “Their choice was simple,” said Moulin. “Run away, risking their lives, or hide for months without food.”

Papa Kinzo is a farmer who lived in Oku, a village in the Poto-Poto area. On 23rd March, he brought his very sick child to a mobile clinic organised by MSF in Ozoba. Three months earlier, he had fled from gunmen who besieged the region, barely escaping with his life. “The soldiers drove us out of our villages,” he recalled. “Then, it was impossible to go back to search for food. People with guns were in the fields and they would shoot you if they saw you because there are militia in this area who live among us civilians. In fact, we have been driven out this way since 2001.”

Events escalated in early March, when the army launched a second offensive. Alarming news reached Gety. According to unverified rumors, civilians were being killed if they tried to forage for food for their families. “We received the first of those who escaped on 8th March,” explains Moulin. “There were very few of them, undoubtedly the hungriest, but also the most courageous who tried to leave first. And they really must have been very brave."

"In particular," she continued, "there were mothers and children and then some old people - those who were able to walk. It had taken them four days to reach Ozoba by taking paths through the bush and by walking at night so they were not spotted.”

From Ozoba to Aveba, the most exhausted are transported by MSF car. April 2010

Population movements intensified as people tried to escape in the days that followed. The community leader in Walendu Bindi and MSF - the only humanitarian organisation present at this time - jointly appealed to the military leaders of the opposing parties to allow civilians to exit safely from the crossfire zone. Unfortunately, throughout the end of March, only small groups of people had emerged from the bush. Questions lingered over whether the militiamen were using their own family members as human shields, putting their lives in danger.

As a result, the MSF team continues to receive more and more exhausted escapees and hastens to refer them to programmes in Aveba and Gety. Among these groups, nearly ten percent of the children under five are suffering from severe malnutrition and have to be hospitalised in Gety. Because so much of the area remains off-limits, however, there is no way to ascertain how many people died on the way from exhaustion, disease, or gunfire from one side or the other.

A total of 2,046 people were able to escape in this way, but the route was choked off again in early April, stranding many others. Community leaders estimate that there are still several thousand people trapped on the edges of the forests, close to the gunfire but without food. “We have the feeling all these gunmen have no clue about their family members," says Gaubert, MSF’s head of mission. “It’s a tragedy since, due to the insecurity, it’s impossible to deliver any humanitarian assistance to them.”

Local people confirm that a single brave student from Bunia managed to save his family but that very few others have been able to reach the people who are trapped. Many inhabitants of Gety and Bunia doubt they will ever learn what happened behind the front lines. There is profound silence about the situation in Ituri, about these populations, and especially about the women and children who flee only to find themselves trapped again. The latest news is that fighting resumed this past week in Mukato Ngazi forest. And yet, Gaubert asserts, “This conflict is not a lost cause and must be pulled out of oblivion and indifference. Solutions must be found to help those people to live in peace.”

MSF provides medical assistance through mobile clinics and hospital referals for people displaced by violence in Ituri district. In the town of Bunia in 2009, 700 children under five years old were hospitalized and a further 2,000 received care through MSF consultations every month. More than 1,000 women received medical and psychological care, mostly for rape.