Médecins Sans Frontières (MSF) continues to respond to the medical and humanitarian needs of Rohingya refugees and vulnerable Bangladeshi communities, and to address gaps in healthcare in Dhaka's Kamrangirchar slum. 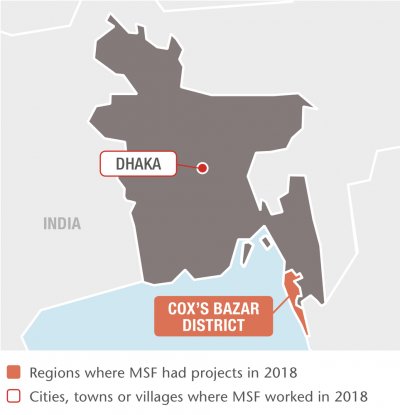 We rapidly scaled up our operations in Cox’s Bazar in response to the massive influx of Rohingya in the second half of 2017 and the first three months of 2018, following a renewed wave of targeted violence by the Myanmar military that started in August 2017. At the end of 2018, we remained one of the main providers of humanitarian assistance to stateless Rohingya, approximately one million of whom have sought refuge in Bangladesh.

Most live in precarious shelters in overcrowded settlements prone to mudslides and flooding, where the quality of hygiene and sanitation services is dire, and there is a shortage of clean drinking water. The main diseases we treat, such as upper and lower respiratory tract infections and skin diseases, are directly related to the poor living conditions.

By the end of 2018, we had teams working in four hospitals, five primary health centres, five health posts and one outbreak response centre, which together provide a range of inpatient and outpatient services, including emergency and intensive care, paediatrics, obstetrics, sexual and reproductive healthcare, treatment for victims of sexual violence and for patients with noncommunicable diseases, such as diabetes and hypertension, and laboratory tests.

Mental health and psychiatric services were also available at most MSF facilities by the end of the year. Health promotion and outreach teams visited the refugee settlements, including the Kutupalong-Balukhali mega camp, which in 2018 became the largest refugee camp in the world, to monitor health indicators, respond to disease outbreaks, deliver health and hygiene education, and raise awareness about sexual violence.

Rohingya crisis: The Bangladeshis at the heart of the response >

We responded to outbreaks of diphtheria, measles and chicken pox in 2018, which reflected the Rohingya’s lack of access to routine vaccinations and basic healthcare in Myanmar. Working with the Bangladeshi Ministry of Health, we carried out mass cholera, diphtheria and measles vaccinations, as well as routine vaccinations at most health facilities. By the end of the year, the outbreaks had been contained, although there were still some cases of diphtheria. We also treated several hundred cases of chicken pox, a disease that can cause complications for pregnant women and people with weakened immune systems.

In addition, we mounted a massive water and sanitation intervention in the camps, setting up two water distribution systems benefiting hundreds of thousands of people. We drilled boreholes and tube wells, rehabilitated old latrines and constructed new sustainable ones, built showers and distributed domestic water filters. 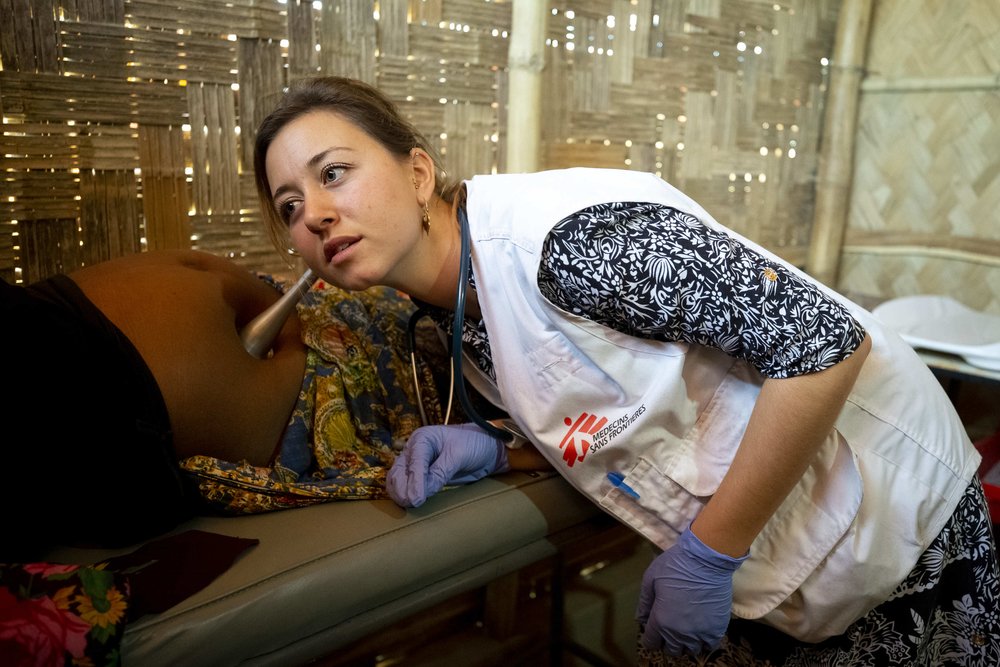 In the second half of the year, we turned to addressing gaps in secondary healthcare and boosting the capacity of hospitals in Cox’s Bazar. We began working with the Sadar Hospital Authorities and the Directorate General of Health Services to improve infection control, hygiene protocols and waste management in Sadar district hospital to reduce hospital-acquired infections. We supported the development of a waste zone that will be the first of its kind in a public hospital in Bangladesh, ensuring medical waste is properly separated and disposed of.

Our teams in Kamrangirchar, a slum area in Dhaka, continued to run reproductive healthcare services for girls and women in 2018, carrying out almost 12,000 antenatal consultations and assisting 760 deliveries. We offered medical and psychological support to 885 victims of sexual violence and intimate partner violence, conducted 9,300 family planning consultations, and carried out 2,000 individual mental health consultations with people of all ages. As part of our occupational health programme, we provided over 9,500 medical consultations and tetanus vaccinations to 550 people working in dangerous conditions in Kamrangirchar’s numerous small-scale factories.

more from our international activity report >