MSF increased its activities in the north of the country to provide emergency care for victims of violence. 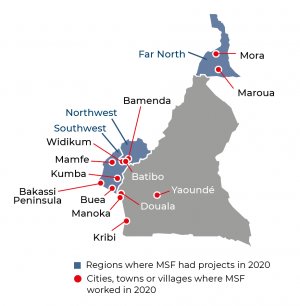 The year was marked by repeated outbreaks of armed violence, followed by new waves of displacement, particularly in Northwest and Southwest regions. By December, a total of 705,000 people were displaced, according to the United Nations Office for the Coordination of Humanitarian Affairs (OCHA). The level of violence has had a severe impact on access to healthcare services in these regions.

To respond to increasing needs, our teams supported around 30 hospitals and health centres, and ran a 24-hour ambulance service, managing almost 9,000 referrals.

Our community health workers, whom we have trained to treat simple cases of common diseases, such as malaria and diarrhoea, conducted more than 150,000 consultations.

On 10 December, agreements between MSF and Ministry of Health facilities in Northwest were suspended by the authorities, leading to the practical cessation of our activities, which has left significant gaps in medical services in the region.

People in Cameroon’s Far North continue to suffer the consequences of daily armed clashes, while facing high levels of food insecurity due to the unpredictable climate.

While we concluded our support to Maroua regional hospital after training specialist staff and refurbishing parts of the hospital such as the intensive care unit, we launched general healthcare activities in Kolofata and added emergency surgery to our Mora project. Previously, many of the trauma and obstetric surgery patients treated in Maroua were referred from Mora. Our Mora project also continued to treat malaria, diarrhoea and paediatric malnutrition.

We responded to cholera outbreaks in Douala, Kribi and the Bakassi Peninsula with responses including vaccination campaigns and health promotion. In Kribi, community outreach teams made more than 80,000 home visits to raise awareness of prevention measures.

The number of displaced people in Cameroon surged in 2018, as fighting broke out between the military and armed separatist groups in the west.

While insecurity and violence in the Far North region and in neighbouring Nigeria continued to push thousands of Nigerian refugees and local communities south, sociopolitical tensions in the English-speaking Northwest and Southwest regions escalated into armed conflict that displaced over 435,000 people by the end of the year.1 Most fled to the bush, where they lacked shelter, food, water and basic health services. 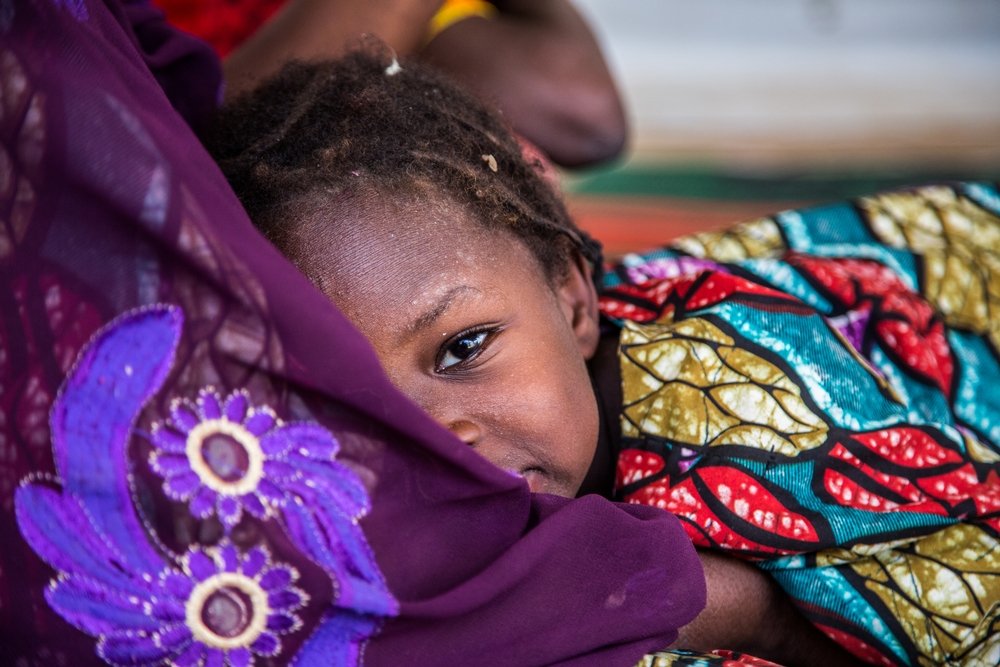 People in Cameroon’s Far North continue to suffer daily violence from the conflict, while also facing extreme poverty in a region subject to an unpredictable climate. We have teams working in hospitals in Mora and Maroua, where they offer medical support, including nutritional care, mental health services, health promotion and emergency surgery in the event of mass casualties.

Closer to the Nigerian border, our teams assist health centres with basic healthcare and hospital referrals. In 2019, we also trained over 40 community health workers in Kolofata and Limani to diagnose and treat simple cases of the most common childhood diseases and identify complicated cases to be referred to health centres or hospitals.

Early in the year, we provided emergency assistance in Goura to around 35,000 Nigerians who had fled across the border from Rann, following a violent attack by the opposition armed group. During the year, our teams conducted around 75,000 consultations, 5,000 mental health consultations and 5,700 reproductive health consultations in our projects in Far North. In addition, we treated more than 23,000 children for diseases such as malaria, diarrhoea and malnutrition (in our facilities or within the communities), and performed 4,000 surgical interventions. 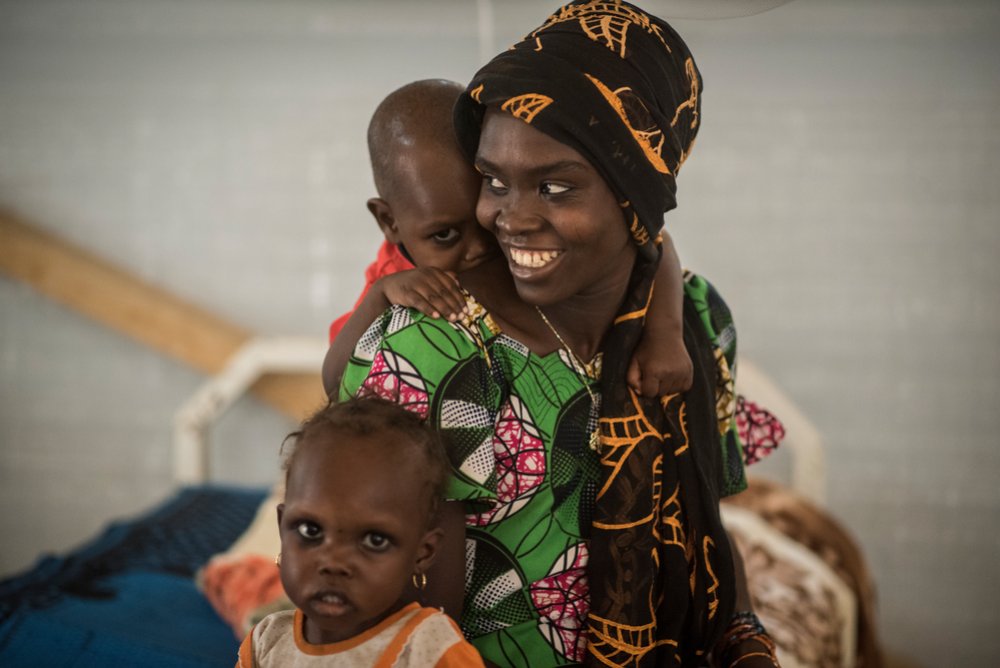 Sylvain Cherkaoui/COSMOS
Falta Mohammad from Nigeria, with her two children at Mora hospital, Cameroon, January 2018. She travelled from a camp for internally displaced people in Banki, Nigeria, to get nutritional treatment for her four-year-old daughter.

Our teams in the north continued to offer medical care, including surgery and psychological support, to displaced people, Nigerian refugees and host communities. We also conducted paediatric activities.

Our teams in Maroua hospital performed 3,250 major surgical interventions and 1,500 individual psychological consultations in 2018, while the teams in Mora expanded activities closer to the border with Nigeria. This included supplying water to the displaced people’s camp in Kolofata and reactivating primary healthcare services in Amchidé. 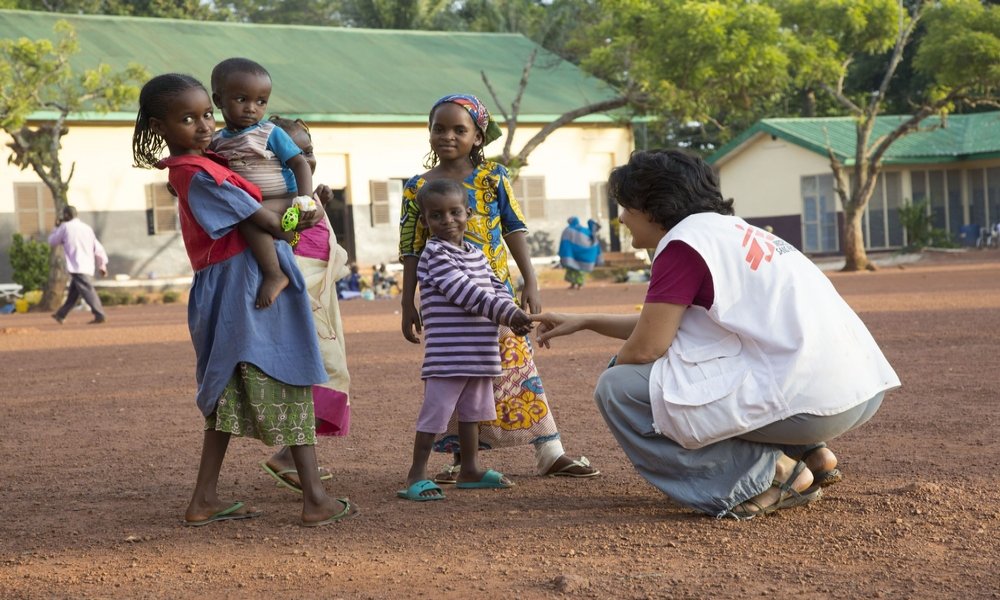 Although there was a lull in armed violence along the border for most of 2018, a rise in attacks and clashes towards the end of the year increased the likelihood of fresh waves of displacement. In Kousséri, on the border with Chad, we were able to hand over activities to the Ministry of Health, thanks to the improved security situation, increased capacity of local healthcare services, and the presence of other NGOs. Between 2015 and October 2018, we provided nutritional and paediatric care at the hospital, and supported three health centres with outpatient consultations. 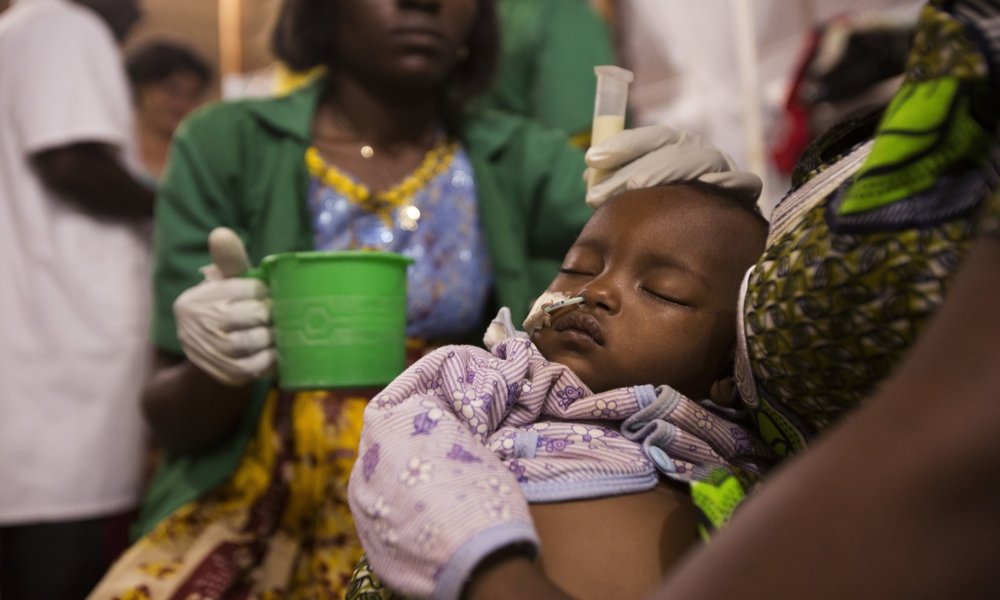 Tristan Pfund
A child is given a gastric nasal tube to help her feed in the ITFC of the district hospital of Batouri.

Cholera broke out in northern Cameroon in 2018, with a total of 995 suspected cases and 58 deaths between the end of June and the end of November. We supported the Ministry of Health’s response with donations of medicine and logistical equipment, built a cholera treatment centre in Fotokol, and helped to refurbish existing centres in Yaoundé’s Djoungolo district and at Garoua regional hospital. Our teams provided training on hygiene and sanitation measures and community health promotion and helped vaccinate almost 105,000 people in Makary health district to prevent the outbreak from spreading further north.

We continued to respond to an ongoing cholera outbreak in the North and Far North regions and also launched activities to tackle a new one on Bakassi peninsula, in Southwest region. Our teams treated 260 patients for cholera and vaccinated more than 35,500 people against the disease. We also conducted epidemiological surveillance and health promotion.