The Democratic Republic of Congo (DRC) has endured decades of multiple overlapping crises and severe limitations in medical capacity. 2018 was marked by further upsurges of extreme violence and frequent, farreaching disease outbreaks.

In the Democratic Republic of Congo (DRC), we are working to tackle the country’s largest outbreaks of measles and Ebola to date, while continuing to address its many other health needs. 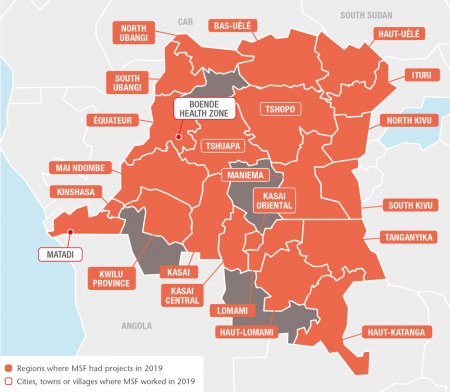 Measles is a vaccine-preventable disease but the failure to cover all health zones with routine vaccination and the delay in organising supplementary campaigns are among the reasons this outbreak is so big.

In DRC, factors contributing to low coverage include the lack of vaccines, vaccinators and access to healthcare facilities, as well as logistical difficulties such as transport. The outbreak occurred at the same time as the Ebola epidemic, which complicated the response.

Médecins Sans Frontières (MSF) ran 54 medical projects in 17 of the country’s 26 provinces in 2018. With services ranging from basic healthcare to nutrition, paediatrics, treatment for victims of sexual violence and care for people living with HIV/ AIDS, we provide comprehensive medical assistance where it is needed most. We responded to nine measles outbreaks and two successive outbreaks of Ebola in 2018, including the country’s largest ever, which was still ongoing at the end of the year.

Longstanding intercommunal violence in Ituri flared up again in Djugu and Mahagi territories, displacing over a million people. At the end of the year, around 200,000 people were sheltered in some 80 makeshift sites, where the living conditions were extremely poor. Our teams provided medical care and distributed water, mosquito nets and relief items at around 30 sites. 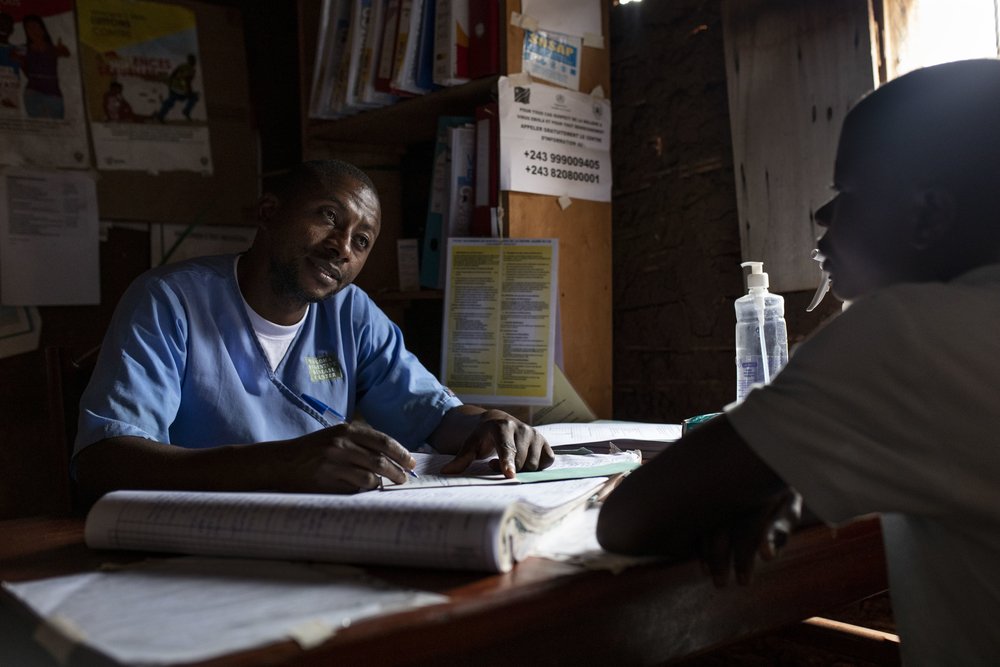 Pablo Garrigos/MSF
A doctor listens to a patient at one of the health centres in Beni, North Kivu, where MSF provides medical staff support and treatment, and donates medical supplies. Democratic Republic of Congo, June 2019.

At the end of the year, we sent an emergency team to assist many thousands of people fleeing extreme violence in the region around Yumbi, in Mai-Ndombe province in the west of the country. To assist refugees from the Central African Republic who had crossed into northern DRC, we supported hospitals and health centres in Gbadolite and Mobayi-Mbongo, North Ubangi province, and ran mobile clinics that also served the local community.

In Bili, in the same province, we supported emergency, paediatric and neonatal services in the referral hospital and in 50 health centres and health posts with an integrated community approach. Over to the east, along the border with South Sudan, we treated more than 48,000 refugees in the informal sites of Karagba and Ulendere.

Comprehensive care in the Kivu provinces

In the Kivu provinces, which have been plagued by conflict for many years, MSF has maintained some long-term projects that ensure continuity of care, while also responding to epidemics, mass displacement and other emergencies.

In North Kivu, our teams operate in Goma, Mweso, Walikale, Masisi, Rutshuru, Bambu and Kibirizi health zones to support the delivery of general and specialist healthcare in hospitals, health centres and posts, and through mobile clinics and community-based outreach activities.

In Baraka and Kimbi we work closely with communities to respond to the three main illnesses affecting the population; malaria, diarrhoea and respiratory tract infections. In 2019, we started constructing a new hospital in Baraka and upgraded Kusisa and Tushunguti hospitals by installing a solar energy system. 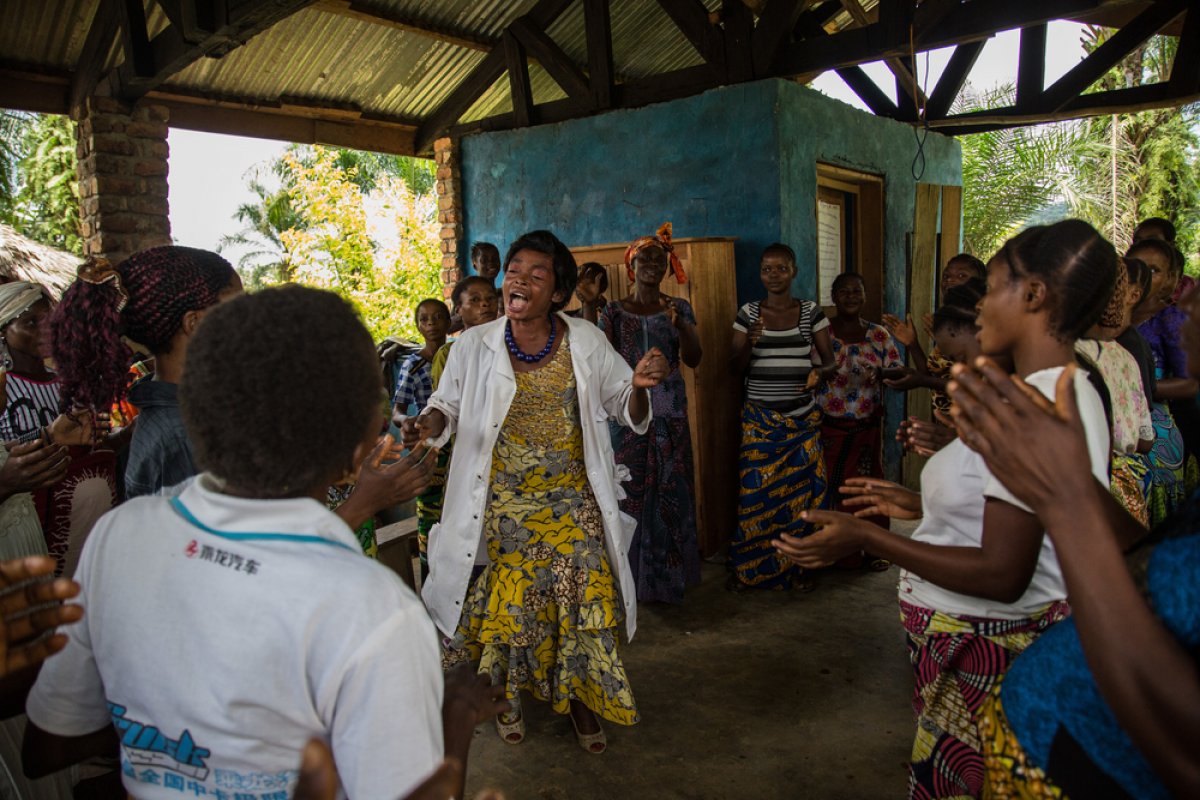 We have teams working in clinics in both Kivu provinces, as well as Kasai Central, Maniema and Ituri, offering reproductive healthcare, including safe abortion care, and medical and psychological treatment for victims of sexual and gender-based violence.

With multiple forms of violence often perpetrated at community level, MSF is training people to be first responders, or trusted focal points, for victims in their own communities. In Kimbi-Lulenge and Kamambare health zones (South Kivu), and in Salamabila (Maniema), Masisi (North Kivu) and Kananga (KasaiCentral), MSF works with 88 such focal points. Most are female, as the majority of victims are women and girls. MSF tries to tackle the prejudice that leads to stigma and even family rejection, and tries to organise referrals to other organisations who can offer socioeconomic assistance.

Throughout the year, our teams supported the national response to large cholera outbreaks across both Kivu provinces. Our teams treated patients in cholera treatment centres (CTCs) and ensured that they and their carers were made aware of good hygiene and sanitation practices to reduce the risk of spreading. We also carried out epidemiological surveys and donated medicines.

During an outbreak between May and September, we opened a temporary CTC in Kyeshero (Goma), Lubumbashi (Katanga) and four more in Masisi, where we treated almost 700 patients in one month, most of them displaced people living in precarious conditions in camps. Malaria also continues to be a major health issue in DRC. At Baraka hospital in South Kivu, we increase treatment capacity every year with 100 beds to respond to the seasonal peak.

In 2019, we introduced larvicide spraying in mosquito breeding hotspots as a preventive strategy. In Bili health zone, North Ubangi, where malaria is hyper-endemic, our teams ran a project across 62 health facilities focused on treating young children. HIV/AIDS remains another deadly threat in DRC, with less than 60 per cent of people living with the disease having access to antiretroviral (ARV) treatment. Limited ARV supply, lack of information and prevention services, stigma and cost are some of the obstacles to care. In the capital, Kinshasa, and Goma, we support 11 healthcare facilities to expand access to HIV treatment and screening, strengthen follow-up and ensure a steady supply of ARVs. 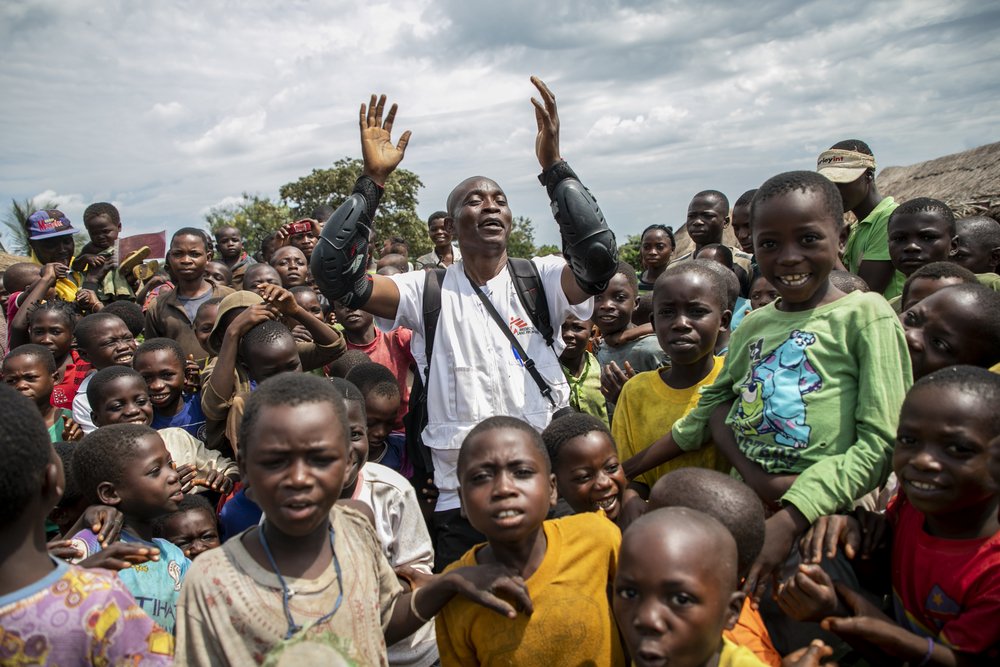 In Kinshasa, we provided medical and psychosocial care for 3,167 HIV-positive patients at Kabinda hospital and seven other facilities. At Misisi health centre in South Kivu, MSF community health educators are part of an HIV support group called the Social Committee for Health Promotion, which raises awareness and fights stigma in the community. In 2019, the group followed 1,821 patients registered in HIV programmes in Misisi, Lulimba and Nyange health centres. Throughout 2019, we continued our advocacy efforts to address the lack of bed capacity for advanced HIV/AIDS patients, tackle ARV stockout problems and enhance specialist care for paediatric patients.

On 11 July 2013, four MSF staff were abducted in Kamango, in the east of DRC, where they were carrying out a health assessment. One of them, Chantal, managed to escape in August 2014, but we are still without news of Philippe, Richard and Romy. We remain committed to obtaining their release.

The Ebola outbreak declared on 1 August 2018 in the Democratic Republic of Congo continued throughout 2019, although the number of new cases decreased significantly towards the end of the year. 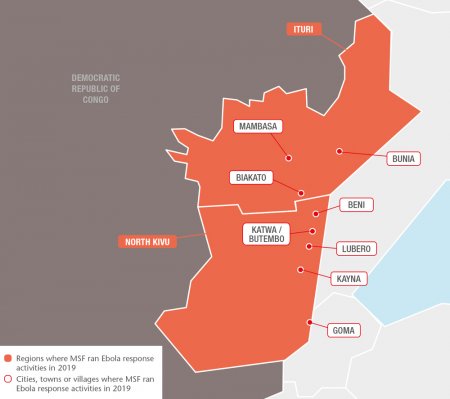 3,800 people admitted to Ebola treatment centres, of whom 170 were confirmed as having Ebola.

In July 2019, the World Health Organization declared the Ebola epidemic a public health emergency of international concern. By 31 December, there had been approximately 3,300 confirmed cases and 2,200 deaths, making it the second-largest outbreak ever recorded, after the one in West Africa in 2014-2016. Over 1,000 patients survived the disease.

During the year, MSF teams continued to provide assistance to people in North Kivu and Ituri, including medical care for confirmed and suspected Ebola cases and vaccinations for people who had been in close contact with those diagnosed with the disease. In addition, we worked to reinforce access to general healthcare in the region, develop community engagement and integrate Ebola care into local healthcare 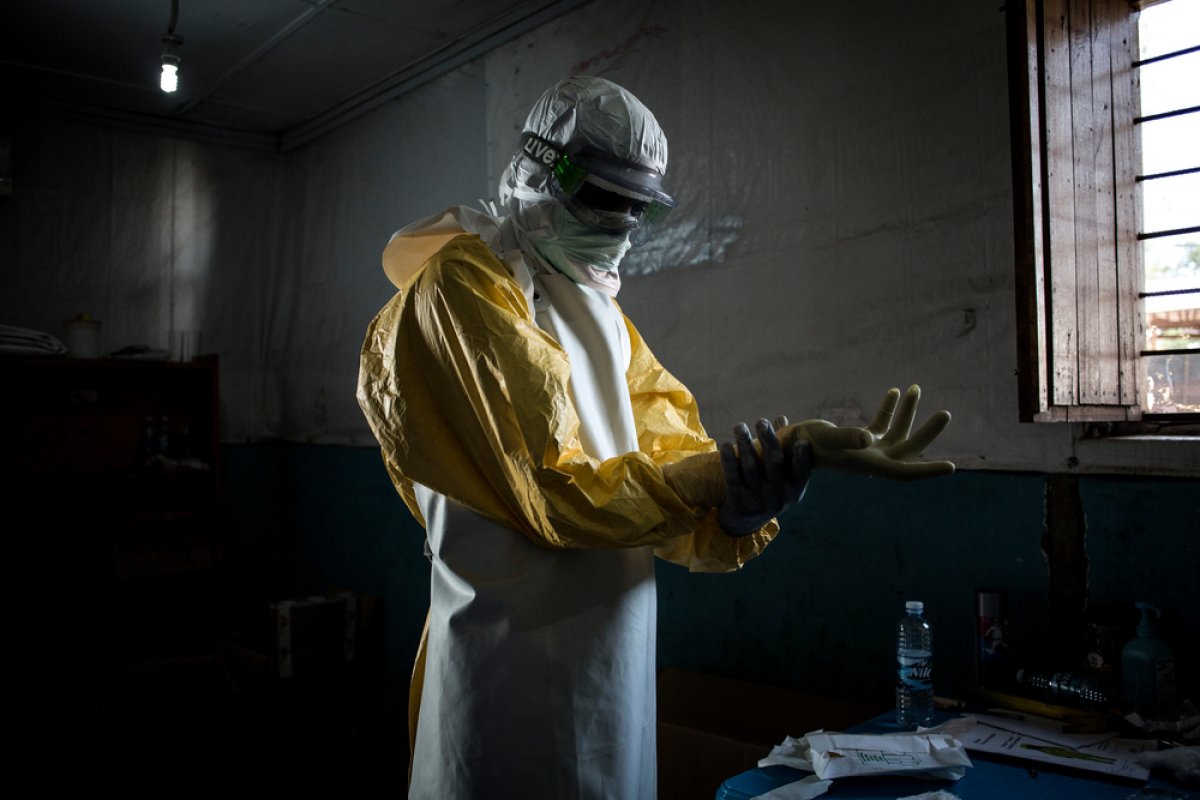 John Wessels
A health worker is seen putting on his personal protective equipment (PPE) before entering the red zone of a MSF supported Ebola Treatment Centre(ETC), where they will check up on patients on November 06, 2018 in Bunia.

facilities. The aim was to adapt our activities to address the full medical and humanitarian needs of the population, which go well beyond Ebola. In February, the Ebola treatment centres we supported in Butembo and Katwa came under violent attack, forcing our teams to leave the area. Over the following months, we scaled up our support to hospitals and health centres at a time when the contamination of facilities and the reassignment of local health staff to Ebola activities was reducing their capacity to provide healthcare.

Between July and August, confirmed Ebola cases were reported in Goma city and South Kivu province, as well as in neighbouring Uganda. In each location, we supported the health authorities to manage the response. These occurrences, which could have signalled a major expansion of the outbreak to new areas of the country and across the border, turned out to be short-lived, and North Kivu and Ituri continued to be the hotspots for the rest of the year.

Progress was made in 2019 with respect to the new medical tools being used to tackle the virus; preliminary analyses indicated that the rVSV-ZEBOV vaccine, in use since the start of the outbreak, is effective in preventing infection, while two of the four developmental treatments subject to the randomised controlled trial gave positive indications and remained the only two treatments in use.

A clinical study of a second potential Ebola vaccine was launched in September. In a context marked by violence against Ebola responders – over 300 attacks were recorded in 2019, resulting in an increased presence of security and military forces around Ebola treatment facilities – our ongoing challenges are gaining the trust of the population and getting local communities to participate in the response effort. These are crucial for an effective response strategy.

FIND OUT MORE IN OUR INTERNATIONAL ACTIVITY REPORt >