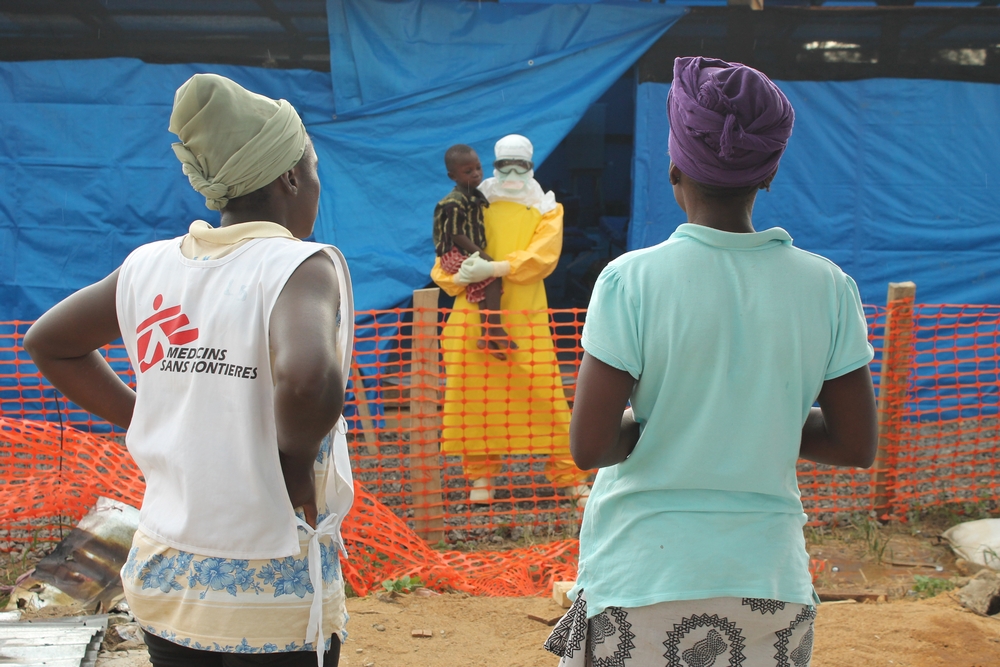 What makes a successful Ebola intervention? An area can be considered free of Ebola after 42 days have passed without a recorded case. This was the situation in Foya, Liberia, when in December 2014 MSF decided to close its project.

MSF's Foya project came to be seen as a model for best practice in an Ebola intervention. As well as following standard intervention methods - isolation of cases, medical care, outreach work, surveillance and safe burials - the close involvement of people from local communities was vital.

The understanding of the people and communities affected by the Ebola outbreak was key to containing the virus and for people to accept MSF's medical activities in the area.

We invested in comprehensive health promotion and communications activities, speaking to communities in their local languages and spreading Ebola awareness messages for symptoms and precautions.

We also informed people that the earlier they sought care at the centre, the better their chances of survival.

Twice weekly phone-in radio shows were held in two of the districts in Foya so that members of the public could call and ask the health promotion team questions.

Architecture of the centre and wards

We re-designed the Ebola management centre to maximise transparency with the local community about our work and address rumours about what was happening inside.

This involved removing the high barrier fences and replacing them with lower, see-through fences so that the people outside were able to watch how the centre was run.

Prior to this, there had been an air of suspicion about what was going on behind our walls. People went in but were rarely seen coming out again.

Special corridors were designed to ease the interaction with patients in the high-risk zone, without the obligation for health staff to wear full personal protective equipment.

Such small details make a huge difference in terms of relieving stress and by safely increasing proximity to others.

Psychological support for patients and their families

We employed a team of psycho-social counsellors to ensure that patients and their families were supported and kept well informed.

The team encouraged and facilitated safe visits of family members to patients inside the centre and passed messages to those not well enough to receive visitors.

A mobile phone was also made available within the confirmed area so that patients from further away could keep in touch with family and friends.

The touching of dead bodies at funeral ceremonies is common in many of the areas affected by the Ebola outbreak in West Africa. Burial practices were noted as a cause of the virus spreading so significantly.

In light of this, we provided safe burials that were conducted in a manner that respected, as much as possible, traditional customs and fully involved family and friends.

Families were informed of the death by the psycho-social team, who invited them to come to the centre if possible so that the news could be relayed properly in person.

They then discussed burial wishes with the family, explaining that for safety reasons not all customs could be respected. Before going to the cemetery, a hygienist would enter the morgue, bring the body bag out and allow the family to see the deceased’s face from a safe viewing distance.

Many relatives like to take photographs to remember the deceased and also to share with those not present.

Some families bring a bag of the person’s best clothes so that they can be buried with them – they are not able to dress the body as they would traditionally, but part of the tradition is kept intact.

If desired by the family, services can be arranged with prayers and speeches at the burial, and the family can provide a coffin for the protective body bag to lie in.

The Talented Young Brothers or TYB Boyz are a group of young Liberian musicians from Foya. They joined in 2005 with the aim of using music to contribute to the post-war development of Liberia.

During the Ebola outbreak in the country, the TYB Boyz were chosen by MSF to record and perform an Ebola awareness song, 'Ebola is Real'.

The group took part in health promotion visits to communities around Lofa County sharing messages on how to prevent Ebola and the number to call if someone gets sick. Their song is played several times a day on the local radio stations.

All of the methods mentioned above helped to bring about a reduction in Ebola cases towards the end of 2014. Forty-two days after 30th October 2014, MSF had not received any Ebola cases in Foya. This meant that we could claim that Ebola had been contained in Lofa county.

We then moved on to the next phase of our response, which involved resuscitating a collapsed healthcare system in the county. A situation that was, unfortunately, typical throughout Liberia.