In Ethiopia, Médecins Sans Frontières (MSF) responds to emergencies and fills gaps in healthcare for internally displaced people and refugees. From November 2020, we assisted people affected by fighting in Tigray region.

Situated in the Horn of Africa, Ethiopia is the most populated landlocked country in the world with a population of over 90 million. 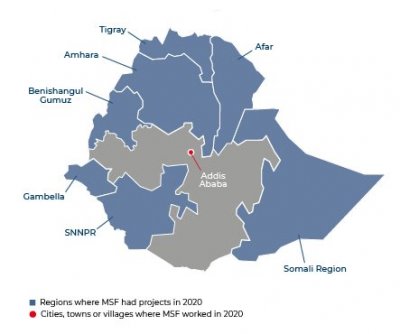 By the end of 2019, Ethiopia was hosting 750,000 refugees, most of whom were from neighbouring South Sudan, Eritrea and Somalia.

The country with the secondbiggest population in Africa witnessed episodes of intercommunal violence, which led to waves of displacement.

Mainly for economic reasons, Ethiopia was also the origin of a fluid migration route towards Saudi Arabia.

MSF continued to work with the Ethiopian authorities to respond to emergencies such as cholera and measles outbreaks, and deliver healthcare to remote communities, refugees and displaced people, and providing treatment for snakebites, kala azar (visceral leishmaniasis) and other neglected diseases.

We also treated people for neglected tropical diseases, including kala azar and snakebite envenomation, in Amhara region. In Addis Ababa, we provided medical and mental health support to repatriated or deported Ethiopian migrants and ensured continuity of care for them in their regions of origin.

In March, we ended our support to Hitsats refugee camp in Tigray region, where we offered mental healthcare to refugees and the host community. 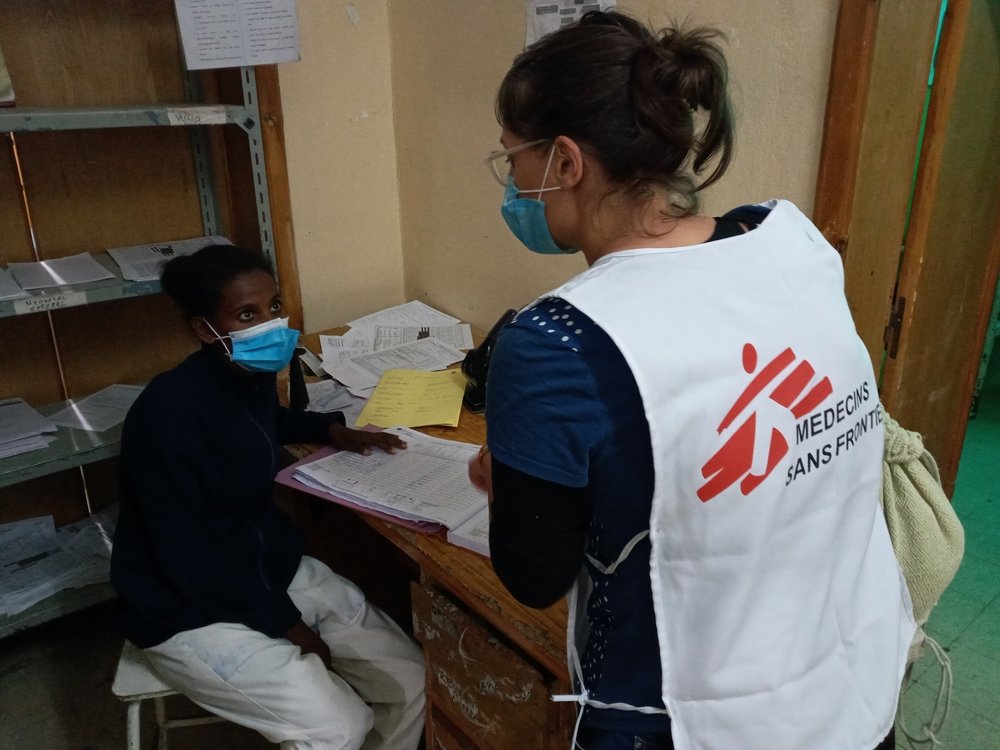 We started supporting health facilities in southern Tigray with training and donations in November, and have been running mobile clinics and supporting some heavily damaged health facilities in other parts of Tigray since mid-December, providing them with oxygen and other vital supplies, and rehabilitating emergency, maternity, paediatric and inpatient services.

On the border of the Amhara region, our teams offered healthcare to thousands of displaced people and supported several health facilities with medical supplies. We also gave nutritional and mass casualty training to Ministry of Health staff. In early November, we provided medical assistance to 278 people wounded in the first clashes in western Tigray.

In addition to growing numbers of internally displaced people, Ethiopia hosts the secondhighest number of refugees in Africa – more than 750,000  at the end of 2019, mostly from South Sudan, Somalia and Eritrea. 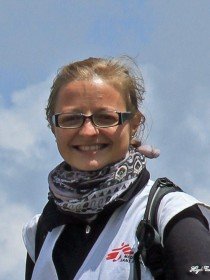 The things I'm grateful for >

In July, we launched one of our biggest emergency interventions of 2018 worldwide around Gedeo, SNNP region (SNNPR), and Guji, Oromia region, after an escalation in ethnic violence that left hundreds of thousands of displaced people without basic services. When our teams arrived, people were living in cramped conditions, sleeping on the ground in vacant buildings, and suffering from diarrhoea, intestinal parasites and respiratory tract infections. We supported several hospitals, health centres, health posts and mobile clinics until the end of the year, when the crisis eased and we handed activities over to the local authorities.

In October, we launched another emergency intervention to respond to the needs of people displaced by violence in East Wellega on the border between Benishangul-Gumuz and Oromia regions. Our teams focused on emergency healthcare, water and sanitation, and at the end of the year, expanded these operations to neighbouring West Wellega.

In the first quarter of the year, teams were still working in some woredas (administrative areas) in western Ethiopia, with a focus on emergency healthcare and water and sanitation for people displaced by violence on the border between Benishangul-Gumuz and Oromia. We concluded these activities in April. In the same month, we launched another emergency intervention in Gedeo, in the southern part of the country, only three months after closing one in the same place.

This was in response to a huge deterioration in the humanitarian situation of the uprooted populations and assessments that showed alarming malnutrition levels among children and lactating women. In five months, MSF teams treated 5,100 patients, 3,820 of them severely malnourished children under the age of five, in inpatient and outpatient therapeutic feeding programmes.

In August, we ended these activities due to a sharp decrease in admissions following the government’s relocation of most of the internally displaced people to neighbouring West Guji. These two displacement crises, both linked to ethnic tensions and conflict, were the worst to take place in Ethiopia in 2018 and 2019, with a total of around 1.2 million people displaced during peak periods. MSF teams responded to outbreaks of violence elsewhere in the country with smaller, short-term interventions, for example in Moyale in Somali region, and Gondar and Metekel in Amhara and Benishangul-Gumuz regions respectively. 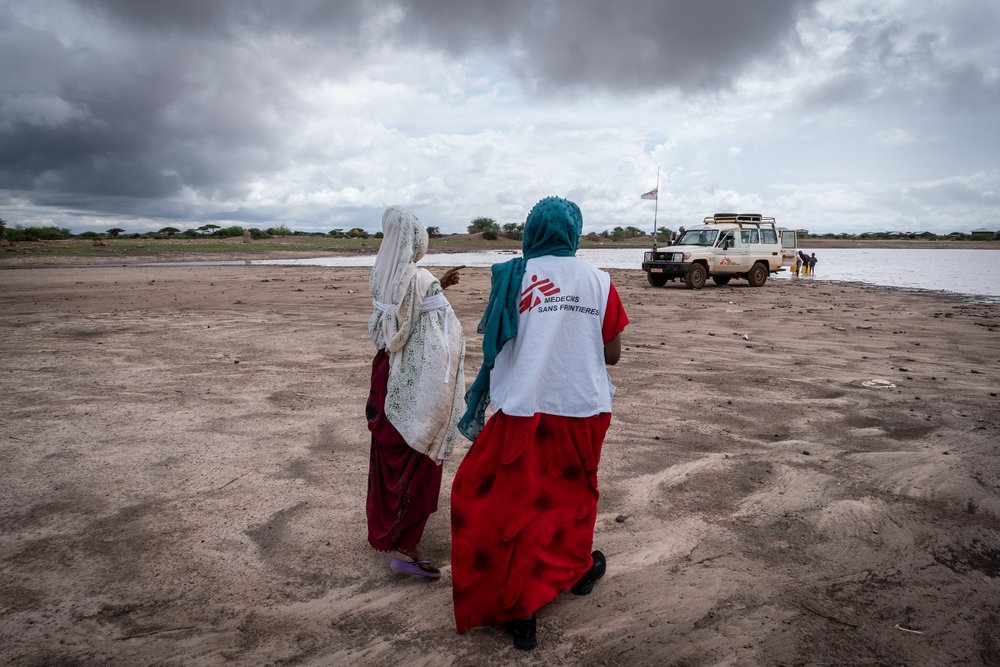 We maintained our support to Gambella hospital, the only facility in the region offering specialised medical care for around 800,000 people, half of them refugees from South Sudan. Each month, MSF teams admitted between 60 and 70 newborns to the intensive care unit and assisted around 250 births. We also carried out surgeries and treated dozens of people in the emergency room every day, including wounded people from the conflict in South Sudan and intercommunal violence conflict.

While the number of South Sudanese refugees decreased during the year, there were 309,000 in Gambella as of December 2019, according to the UN refugee agency, UNHCR. We continued our interventions in Kule, Tierkidi and Nguenyyiel refugee camps and Pamdong reception centre, conducting around 264,000 outpatient consultations, assisting some 2,230 births and providing care for 2,950 patients admitted in the health centre. At the end of the year, we closed our activities in Nguenyyiel camp and reduced our operations in Tierkidi camp to be able to focus more on quality healthcare delivery in areas where no other healthcare provider is present.

More than 70,000 Eritrean asylum seekers sought refuge in Ethiopia in 2019, adding pressure on registration and reception facilities and exacerbating the already dire conditions in the camps. In Hitsats camp in Tigray region, our teams conducted over 3,000 psychiatric outpatient consultations and 1,160 individual mental health consultations, with both refugees and the host community.

In and around Abdurafi, in Amhara region, we continued to focus on visceral leishmaniasis, also known as kala azar, and on the management of snakebites. It is mostly seasonal migrant workers who are affected by both neglected diseases, as they have not built up an immunity to kala azar, live in poor living conditions and work unprotected in the agricultural sector, making them an easy target for snakebites. We screened over 2,100 suspected cases of kala azar and treated 320 patients with the disease. We also continued with clinical research to develop safer treatment and better diagnostics. Our teams treating snakebites witnessed an exponential increase in cases, from 647 in 2018 to 1,431 in 2019, which reflects the extent of the problem and the need to invest more in snakebite treatment research.

In Doolo zone, we expanded our work to reach the most vulnerable pastoral communities. By the end of the year, we were operating in 18 flexible mobile clinic sites, offering comprehensive general healthcare, including maternal health services. We also strengthened a dynamic health surveillance system via ‘tea teams’ to engage the community over tea, as per local tradition. In September, we handed over to the local health authorities our last medical activities in Dolo town, in Liben zone, after a continued presence of nearly a decade. Over the previous years, health indicators stabilised and there were no significant arrivals of refugees from Somalia.

Ethiopians continued to migrate from rural areas with the aim of reaching Saudi Arabia and other Gulf countries and finding better paid jobs. According to the International Organization for Migration, 138,000 people – mostly Ethiopians, but also people from other African countries – set off from the Horn of Africa across the Gulf of Aden towards Yemen in 2019; this exceeds the number who crossed the Mediterranean seeking safety in Europe.

At the same time, an average of 10,000 Ethiopians per month arrived in the capital, Addis Ababa, on flights from Jeddah, as part of a deportation drive that the Saudi authorities initiated in 2017. Our teams maintained a medical screening project at the airport and mental health support at a counselling centre in the city. The migrants undergo an extremely perilous journey, during which most witness or experience traumatic violent incidents either at the hands of traffickers while crossing wartorn Yemen or in detention in Saudi prisons.