More than 50,000 migrants and refugees from countries such as Syria, Afghanistan and Iraq arrived in Greece in 2018.*

Throughout 2020, Médecins Sans Frontières (MSF) continued to denounce the policies that have trapped thousands of people in terrible conditions on Greek islands. 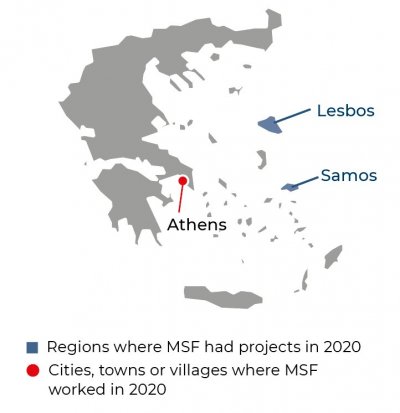 By March, more than 20,000 men, women and children were held in undignified conditions in Moria, a reception centre on Lesbos island with an official capacity of 3,000. COVID-19 lockdown measures further restricted their capacity to move, buy food and access healthcare or legal assistance.

MSF runs a clinic outside Moria to provide sexual and reproductive healthcare, and general healthcare and mental health support for children. In June, we opened an emergency COVID-19 isolation centre, which the local authorities forced us to close soon after. On the night of 7 September, Moria was completely destroyed by several fires and more than 12,000 people were displaced. We rapidly sent mobile clinics and opened an additional clinic to respond to urgent needs. People were moved to a new camp where, by the end of the year, 7,000 people were still living in tents.

On Samos island, at times there were as many as 8,000 people living in Vathy reception centre, which was originally planned for 650. The authorities’ COVID-19 response was inadequate, with only a handful of medical staff and unacceptable quarantining options for infected people. During 2020, MSF provided toilets and thousands of litres of water per day to help prevent health problems associated with poor water and sanitation. In Vathy town, our day centre continued to offer mental health support and sexual and reproductive healthcare, focusing on sexual violence. 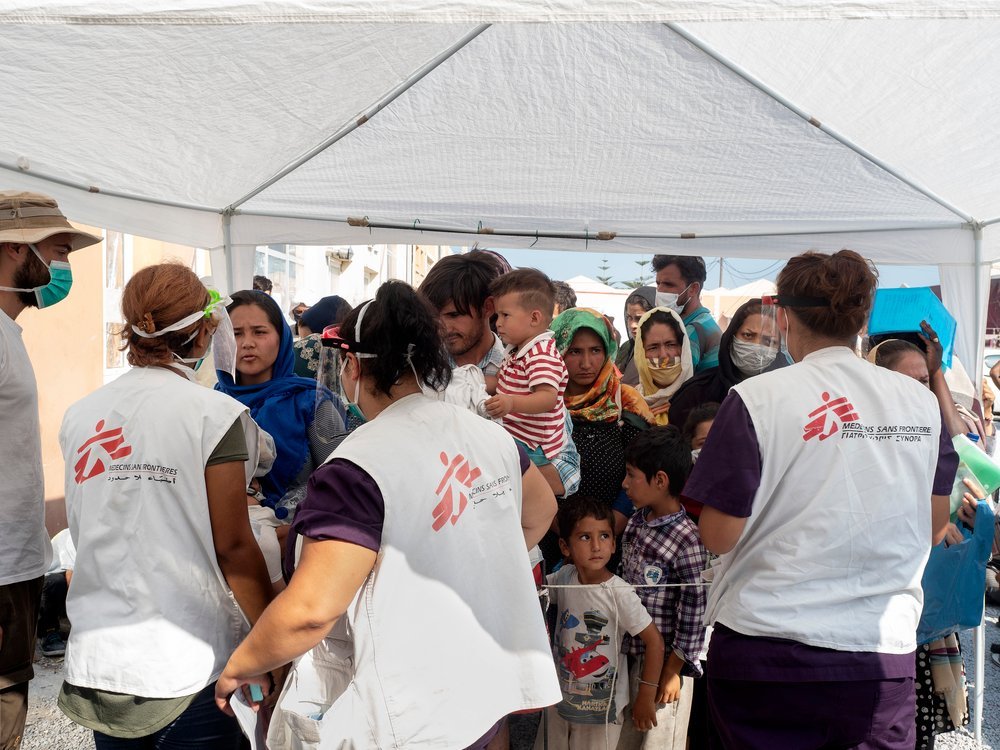 Enri CANAJ/Magnum
GREECE. Lesbos. September 15, 2020. After the fires that destroyed Moria camp on September 9-10, thousands of people were forced to sleep in the streets, with no access to toilets, water, food or medical care.

In Athens, we treated victims of torture at a specialised clinic and, at a day centre we manage, we offered social and legal assistance, as well as health services. From July, we supported an increasing number of refugees with severe health and psychological issues at risk of eviction from their accommodation.

In 2019, Médecins Sans Frontières (MSF) teams conducted almost 46,600 outpatient consultations across Greece. During the second half of 2019, the humanitarian situation in the five reception centres quickly deteriorated.

At the same time, the new Greek government approved a new, stricter law on international protection, which reduced the already limited ability of asylum seekers to obtain healthcare. The new law also means that minors can now be detained, and post-traumatic stress disorder no longer qualifies as a vulnerability. As a result, even extremely vulnerable people have to spend long periods living in precarious conditions, which exacerbates their medical and mental health problems.

On Lesbos, we continued to run a paediatric clinic outside Moria camp offering general healthcare and mental health support to minors, and sexual and reproductive health services to pregnant women. In Mytilene town, we treated victims of torture and sexual violence, as well as people with severe mental health problems caused by trauma in their countries of origin, on their journeys to Greece, or by the stress and insecurity of their situation in Moria. In response to the massive increase in arrivals on Samos, we scaled up our activities. We installed a water and sanitation system for the people who live around the official reception centre, providing them with clean drinking water and toilets.

This is the first step in an intervention that will also involve the construction of showers, to prevent health problems associated with water shortage and poor hygiene. Near the camp, we run a day centre offering mental health support and sexual and reproductive healthcare. Our services on Chios include general healthcare, sexual and reproductive healthcare, mental health support, social care and travel medicine for people at Vial camp, as well as cultural mediation services at the local hospital.

We run two clinics in Athens to respond to the specific needs of people on the move. The first, a day centre, provides sexual and reproductive healthcare, mental health support, treatment for chronic and complex diseases, social and legal assistance, as well as travel medicine for people planning to move on from Greece.

The second offers comprehensive care to victims of torture and other forms of violence and is managed in collaboration with two other organisations, the Day Centre Babel and the Greek Council for Refugees. It implements a multidisciplinary approach, comprising medical and mental healthcare, physiotherapy, and social and legal assistance. 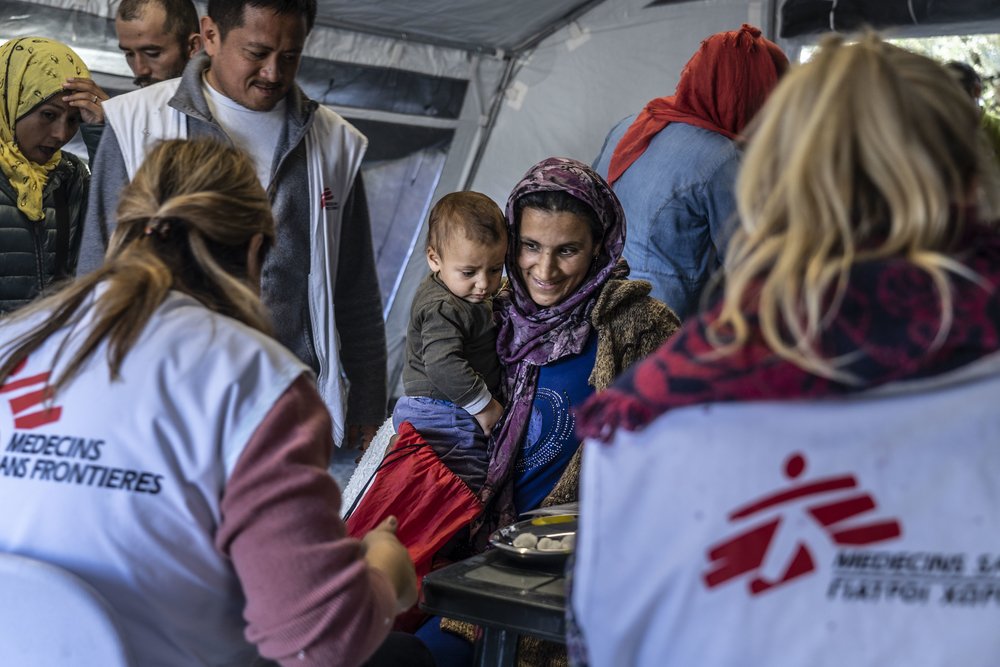 Anna Pantelia/MSF
A woman brings her child to be vaccinated against the most common childhood diseases during a vaccination campaign on the Greek island of Lesbos, November 2018.

Since the so-called EU-Turkey deal in March 2016, migrants and refugees who were in transit through the Greek islands have been trapped, waiting for their status to be determined. Consequently, they spend long periods in inadequate reception centres, with poor access to healthcare and the fear of being sent back to Turkey, which exacerbates their medical and mental health problems. We continued to denounce this deal and its dramatic impact on the health of men, women and children trapped on the islands in 2018. 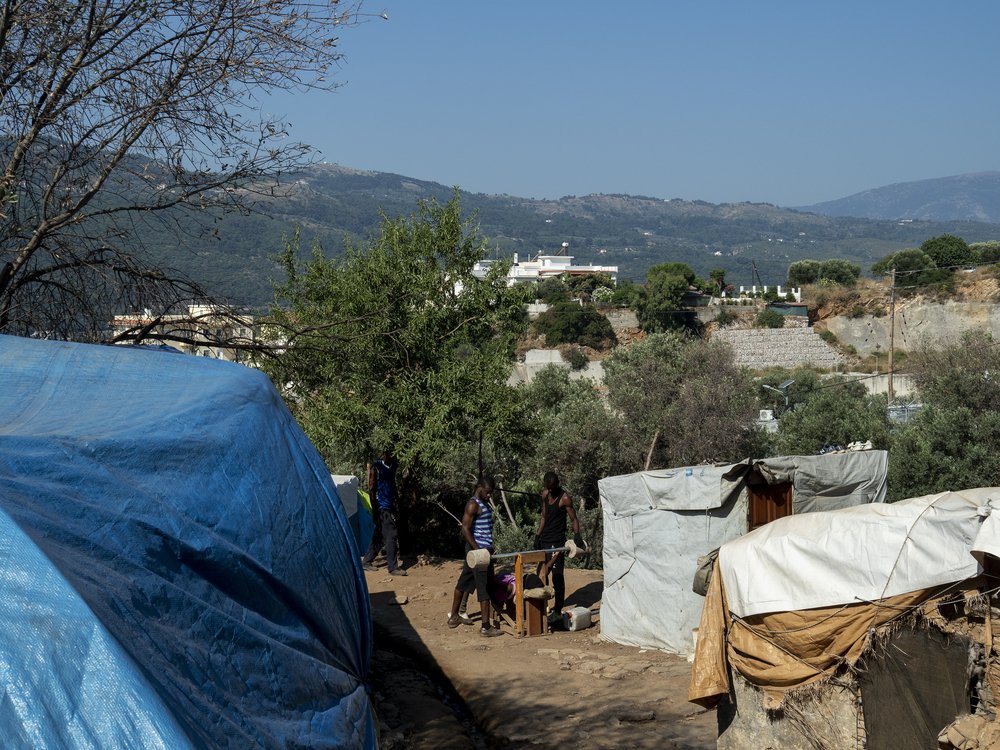 ​Since 2016, we have been running a clinic on Lesbos offering primary healthcare, sexual and reproductive health services and mental health support. In late 2017, we set up an additional clinic outside Moria reception centre, providing the same services for children under 16, pregnant women and victims of sexual violence. We also have a team in Mytilene town treating patients with severe mental health conditions caused by trauma and violence in their country of origin or on their journey to Greece. Many of our patients, including minors, reported that the insecure and inhumane conditions in Moria itself played a major part in pushing them towards despair, self-harm or suicidal thoughts.

On Chios, we provide primary healthcare, sexual and reproductive healthcare, mental health support and social care for refugees and migrants. We have cultural mediators and social workers in the hospital on the island, and in April started running travel medicine services to guarantee healthcare continuity for patients in transit, including health advice, vaccinations, medication and referrals to MSF services in Athens.

Until April, we also provided mental healthcare, health promotion and temporary shelter for people in the town of Vathy, on the island of Samos, which hosts mostly women, children and patients requiring urgent medical treatment on the mainland.

We run two clinics in Athens to respond to the specific needs of migrants and refugees.

In our second centre, run in collaboration with Day Centre Babel and the Greek Council for Refugees, we offer comprehensive care to victims of torture, ill-treatment and other forms of degrading treatment. The clinic’s multidisciplinary approach comprises medical and mental healthcare, physiotherapy, social assistance and legal support.

In response to the huge increase in arrivals (more than 18,000 in 2018 compared with around 6,500 in 2017), and the absolute lack of healthcare provision by the Ministry of Health, in July we sent a team to work in the reception and identification centre in Fylakio, in Evros region, on the border with Turkey, until the end of the year. We provided general healthcare consultations, sexual and reproductive health and travel medicine consultations.