In Guinea, Médecins Sans Frontières (MSF) focuses on treating and preventing HIV/AIDS, malaria, measles, malnutrition and respiratory infections. In 2020, we assisted with the emergency response to the COVID-19 pandemic.

Despite an abundance of mineral wealth, Guinea's people are among the poorest in West Africa. 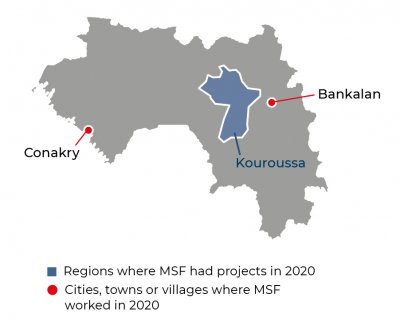 The country has rich deposits of bauxite, diamonds and gold, but due to political instability and a lack of infrastructure, little of this wealth reaches Guinea's population.

Ruled by strong-arm leaders for much of the time since its independence from France in 1958, Guinea has been seen as a bulwark against instability in neighbouring Liberia, Sierra Leone and Côte d’Ivoire. However it has also been implicated in the conflicts that have ravaged the region.

Along with Sierra Leone and Liberia, Guinea was pushed to the forefront of the world stage in 2014 as the devastating Ebola outbreak spiralled out of control - originating in Guinea itself.

Médecins Sans Frontières/Doctors Without Borders (MSF) first began working in the country in 1984.

In Guinea, Médecins Sans Frontières (MSF) focuses on treating and preventing HIV/AIDS, malaria, measles, malnutrition and respiratory infections. In 2020, we assisted with the emergency response to the COVID-19 pandemic.

MSF remains one of the main organisations offering medical and psychosocial care for people living with HIV in the capital, Conakry. In the HIV unit we run at Donka hospital, our teams provide care to patients living with an advanced stage of the disease. We also support HIV testing and treatment in eight health facilities, and conduct awareness-raising, testing and condom distribution campaigns. In 2020, we set up a new centre where HIV patients can benefit from peer support and access medication without having to go to hospital.

As the number of COVID-19 cases rapidly increased in Conakry in April, we established a 75-bed treatment unit in a centre we had originally built in 2014 to treat Ebola patients. In collaboration with the health authorities, our teams also carried out contact tracing, disinfection of patients’ homes and prevention and follow-up activities.

From March to August, when there was an increase in measles cases in Conakry, our teams supported care for children under five in Matoto, Matam and Ratoma communes.

In Bankalan, Kankan region, in response to floods which displaced hundreds of people, we rehabilitated a health post, built latrines and provided consultations and essential medicines.

In Kouroussa prefecture, we run a programme offering treatment for malaria, malnutrition, diarrhoea and respiratory infections for children under five. In 2020, the community health workers we trained, equipped and supported, treated over 27,000 children for malaria and diarrhoea in their communities. Meanwhile, we continued to support 24 health facilities in Kouroussa, including the prefectural hospital, where we treated patients requiring specialist care. A total of 65,000 people were admitted during the year.

In 2019, we expanded our community-based child health programme to cover the whole Kouroussa prefecture, providing training and logistical support to 152 community health volunteers and 23 health posts and health centres to improve the detection, treatment and referral systems for patients with malaria, malnutrition and respiratory infections.

Thanks to this approach, 47,927 children were diagnosed with malaria using rapid tests, and more than 38 per cent of them were treated directly in the community. Meanwhile, we continued our medical and logistical support to Kouroussa prefectural hospital, where nearly 2,460 children were admitted and treated for severe forms of malaria during the year. As we plan to close the project by the end of 2021, a roundtable with local, regional and central authorities was organised in order to guarantee continuity and community engagement.

Another focus of MSF activities in Guinea is HIV care. Fewer than half of HIV-positive patients have access to treatment and HIVrelated deaths are on the rise. In the capital, Conakry, we continued to support testing, treatment and follow-up services for HIV patients through eight health centres and provide specialised care for advanced-HIV patients in the 31-bed unit at Donka hospital that we rehabilitated this year.

We also ran public testing campaigns and awarenessraising activities, which led to 4,397 people being tested over the year. In addition to running these regular projects, MSF conducted a selected catch-up vaccination campaign in Conakry’s Matoto district, vaccinating nearly 14,800 children with measles, oral polio and 5-in-1 vaccines (diphtheria, tetanus, pertussis, hepatitis B and Haemophilus influenzae type B), and treated 1,390 patients for measles.