The conflict in Iraq continues to cause massive displacement and hardship

In 2019, Médecins Sans Frontières (MSF) continued to provide essential healthcare services in Iraq, where people are suffering from the effects of years of conflict and ongoing instability. 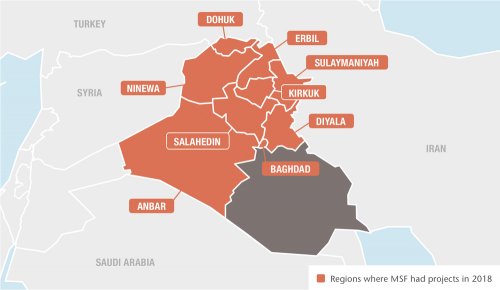 The conflict in Iraq continues to take its toll by killing, injuring and displacing thousands of civilians. Many health facilities were destroyed, leaving the sick and wounded with no access to care. Millions of people continue to be affected by fighting and are in need of medical assistance.

Since 2014, over 3.3 million people have been displaced across the country, and while many have found their way to camps, others are living in schools,  mosques and unfinished buildings.

The heartland of the Islamic Empire in the middle ages, Iraq gained independence from Britain in 1932.

A US-led invasion in 2003 has lead to instability, with insurgents, including al-Qaeda, fighting for control. Médecins Sans Frontières/Doctors Without Borders (MSF) first worked in Iraq in 2003. Our work in the country has provided a response to armed conflict and healthcare exclusion.

Although displaced people continued to return to their homes in 2019, more than a million still face significant barriers that prevent them from doing so. Some have been living in camps for years, with little access to basic services. At the end of the year, the violent crackdown on protests in various cities across the country put additional pressure on the health system.

Many healthcare facilities have been destroyed and there is an overall shortage of healthcare specialists and services, vitally needed to address primary and secondary healthcare needs and trauma resulting from ongoing violence. Our teams have observed an increase in mental health needs generated by prolonged suffering among both internally displaced people and the rest of the Iraqi population, including trauma related to domestic violence, psychosomatic disorders, post-traumatic stress disorder, depression and anxiety

In 2019, we maintained our range of basic and secondary health services, such as maternity and neonatal care, emergency rehabilitation, treatment for non-communicable diseases, surgery and post-operative care, and mental health support for displaced people, returnees and vulnerable communities. From October, when the demonstrations started, our teams also provided medical supplies and technical support to various hospitals across the country. Throughout the year, our teams operated hospitals and clinics in some of the most war-affected regions to help restore some of the most indispensable healthcare services for the Iraqi people.

We continued to provide primary healthcare, treatment for NCDs and mental health services, including psychiatric care, in two camps for internally displaced people (IDPs), handing over activities in the second half of the year as the camp populations gradually decreased and other organisations started providing medical services.

In April, we opened an outpatient clinic at Ramadi teaching hospital to treat patients with moderate and severe mental health disorders.

The focus of activities at Baghdad Medical Rehabilitation Centre is rehabilitative care, including pain management, physiotherapy and mental health support for people injured in violent incidents or accidents. After the mass protests broke out in October, we increased capacity from 20 to 30 beds.

In addition, we gave mass casualty triage training to 80 doctors and nurses working in the emergency department at Imam Ali hospital in Sadr city, to enable them to cope with approximately 20,000 patients every month. We also opened a project aimed at providing shorter and injection-free treatment for drug-resistant tuberculosis patients and supported local diagnostic capacities for the disease. 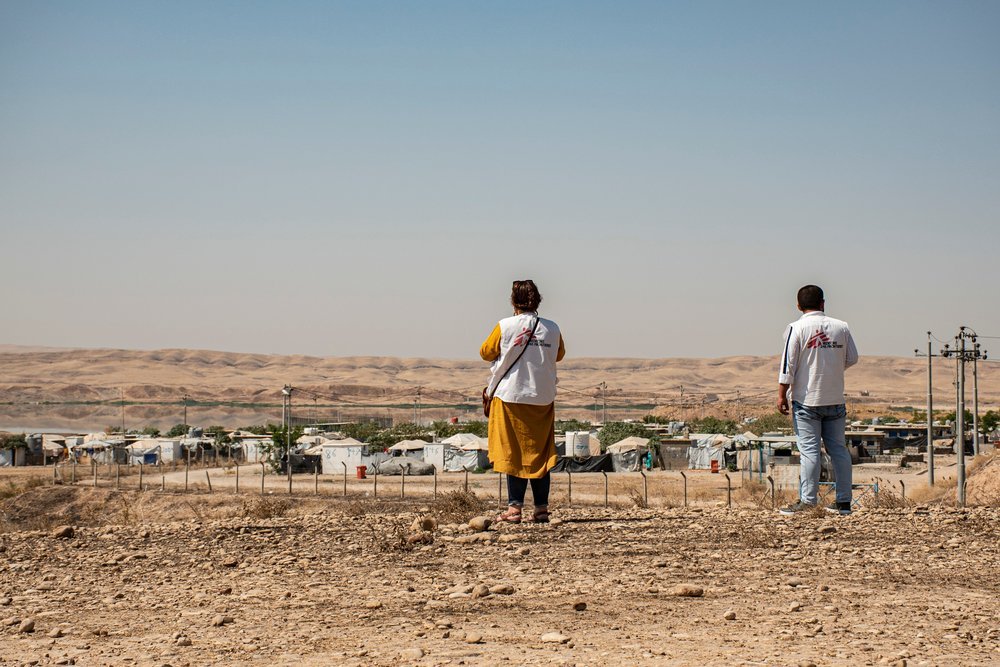 MSF/Hassan Kamal Al-Deen
MSF staff near Alwand 2 camp in the Khanaqin district of Diyala governorate. Many people displaced from different regions have been living in the camp for years. Iraq, August 2019.

When protests started in southern governorates at the end of 2019, MSF launched an emergency response in Nasiriyah, which included training staff to deal with mass casualties, and supporting the emergency preparation of first-aid posts.

In addition, we supported the emergency room, laboratory and infection prevention department in Hawija general hospital.

The war against the Islamic State group had a devastating impact on Ninewa, resulting in severe physical and mental trauma among its inhabitants, the destruction of health facilities and the displacement of large numbers of people.

Mental healthcare was a main component of all MSF services in Ninewa, and our teams of psychologists conducted a total of 14,000 individual mental health consultations there in 2019.

To address the shortage of skilled surgery and post-surgical care, MSF opened a comprehensive centre for patients with violent or accidental trauma injuries in east Mosul in 2018.

The hospital has a mobile operating theatre, a 33-bed inpatient ward, recovery rooms and rehabilitation units. During 2019, MSF teams conducted nearly 580 surgical interventions. We also donated to the Department of Health a newly built facility dedicated to the treatment of infectious diseases in east Mosul.

In west Mosul, we run a comprehensive maternity unit in Nablus hospital with surgical capacity for caesarean sections. Our team there provides emergency obstetric and neonatal care, inpatient paediatric services, as well as emergency treatment and stabilisation of patients before referral to other hospitals.

During 2019, they conducted 43,100 emergency room consultations and assisted 9,300 births. As displaced families returned to west Mosul, we set up maternity services in AlRafedein basic healthcare centre to respond to the increased demand for sexual and reproductive healthcare.

We also extended our outreach activities for Yazidis and other communities in Sinjar district, offering sexual and reproductive health services, including births, and paediatric care through our hospital and in the displacement camps. We treated a total of 14,581 patients in the emergency room in 2019.

In Qayyarah subdistrict, we continued to run an emergency room and offer paediatric and maternity services, nutritional support, surgery and rehabilitative care, as well as treatment for burns. These services benefit host communities as well as internally displaced people.

During 2019, our teams conducted 2,670 surgeries, and were also able to boost the capacities of local healthcare providers through training and donations, and hand over our neonatal and paediatric activities.

From the beginning of the clashes in northeast Syria in October until the end of 2019, more than 17,000 people crossed the border into Iraq.

In October, we conducted mobile clinic activities in Bardarash camp and at the Sahela border reception site to provide refugees and internally displaced people with general healthcare services and mental health consultations. 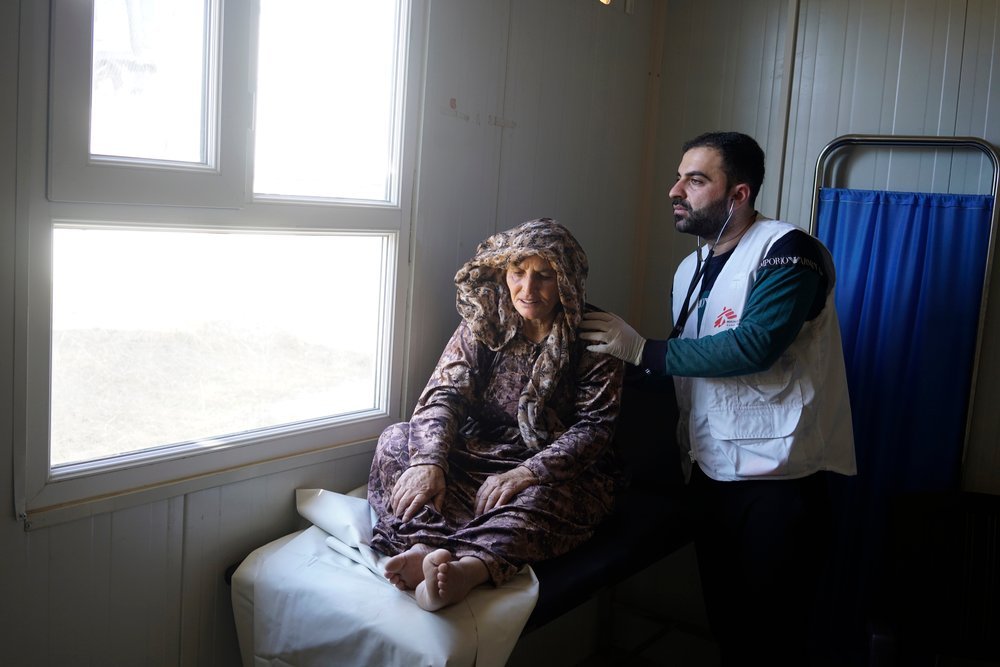 Moises Saman / Magnum Photos
Jamilla, a 58-year-old Syrian Kurdish refugee, at a clinic run by MSF inside Bardarash refugee camp. Jamilla came to the clinic with back and leg pain. Iraq, November 2019.

After several cases of Crimean-Congo haemorrhagic fever were reported in different regions of Iraq, we rapidly deployed a team of experts to support hospitals. In July, 228 Iraqi doctors, nurses and cleaners were trained in five public hospitals in Diwaniyah, Najaf, Babel and Baghdad governorates.

We also supported the Department of Health to vaccinate more than 111,000 children aged six months to 15 years old in response to a measles outbreak in Ninewa governorate in July.

find out more in our international activity reporT >