Despite conjuring images of widespread death in the Middle Ages, plague is today an entirely treatable disease.

The story of plague today should not be one of panic and fear.

A treatment is widely available that not only cures people affected by the disease but is also used as a prophylaxis to prevent those at risk of falling ill.

From 2010 to 2015 there were 3,248 cases reported worldwide, including 584 deaths which did not all occur in the most endemic countries. The United States had 16 cases of bubonic plague in 2015, resulting in four deaths.

Currently, the three most endemic countries are Democratic Republic of Congo, Madagascar and Peru.

From August to November 2017, Madagascar battled with a large outbreak of pneumonic plague, the most deadly and most contagious form of the disease.

MSF launched an intervention in the coastal city of Tamatave (also known as Toamasina) to support Malagasy authorities battling the outbreak.

Two-hundred-and-forty-nine people were treated and healed in the plague treatment centre set up in Tamatave by MSF and other partners. Twelve people died of the disease in the city between August and November.

The Yersina pestis bacteria can be found in about 200 species of mammals that live on every continent except for Oceania.

As it lives in an animal host it is virtually impossible to eradicate.

Bubonic plague is transmitted to humans by infected fleas.

It infects your lymphatic system (the immune system), causing inflammation.

Untreated, it can move into the blood and cause septicemic plague, or to the lungs, causing pneumonic plague.

When there is no contact with animals that carry plague-spreading fleas (most commonly rats), there is no cycle of infection.

Bubonic plague outbreaks cannot, therefore, occur in places where there is no animal vector.

Pneumonic plague is highly contagious and can be transmitted from person to person.

It occurs when the bacteria infects the lungs, causing pneumonia.

It is contracted when the bacteria are inhaled (primary infection) or develops when a bubonic or septicemic plague spreads to the lungs (secondary infection). 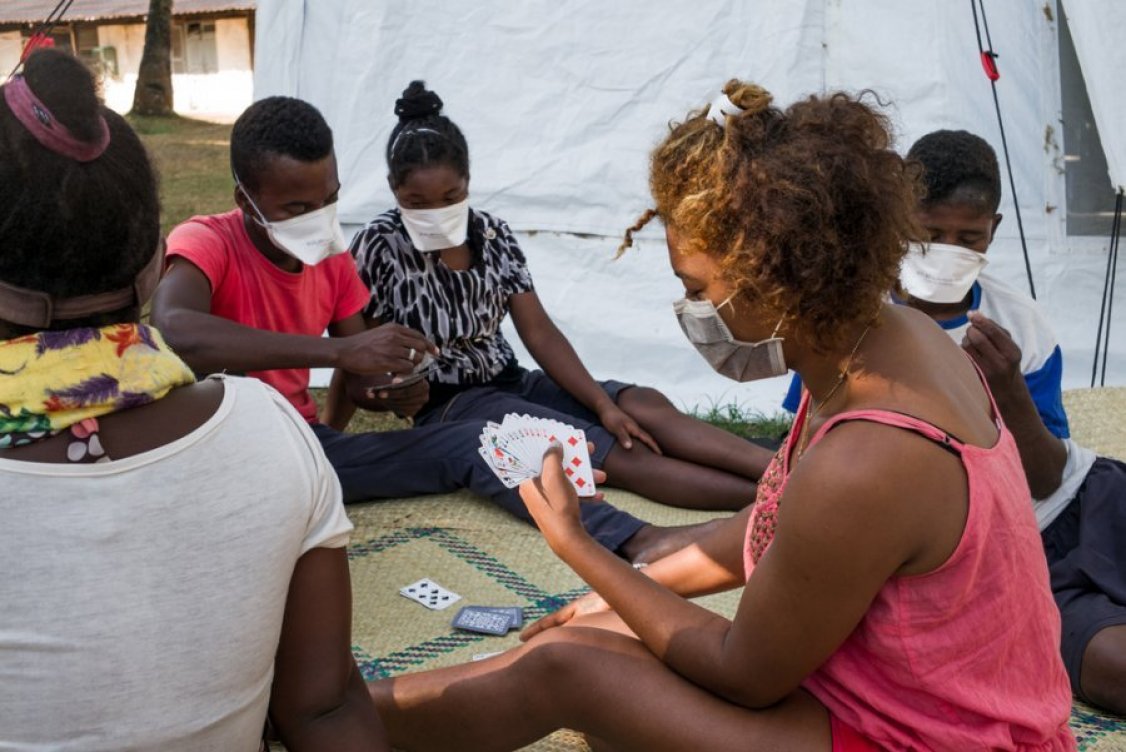 RIJASOLO/Riva Press
Marie Florencia (right), 22, plays cards as she recovers from plague at the Plague Triage and Treatment Centre in Tamatave, Madagascar.

Septicemic plague: fever, chills, extreme weakness, abdominal pain, shock, possible bleeding into the skin and other organs. Skin and other tissues may turn black and die, especially fingers, toes and the nose.

Bubonic plague is diagnosed by a fluid sample from the lymph nodes.

Pneumonic plague is diagnosed through an endoscopy, where fluid from the airways is extracted by a tube.

A blood test can reveal if you have the septicemic plague.

Cheap, efficient and widely available antibiotics can treat plague, with 100 percent patient recovery if the treatment is started on time.

Antibiotic treatment is also taken as a prophylaxis to provide full protection to people at risk, such as health professionals and people who have been in contact with infected patients.

This article was last reviewed on 29 April 2019