Tigray violence in Ethiopia and refugee crisis in Sudan

Tens of thousands of refugees have fled the Tigray region of Ethiopia after fighting erupted in early November 2020.

Our teams began triaging and treating war-wounded people on 5 November in the Amhara region of Ethiopia.

Médecins Sans Frontières / Doctors Without Borders (MSF) is also providing emergency medical care to people who have fled across the border into Sudan.

People fleeing the violence are in urgent need of medical care, shelter, water and food. 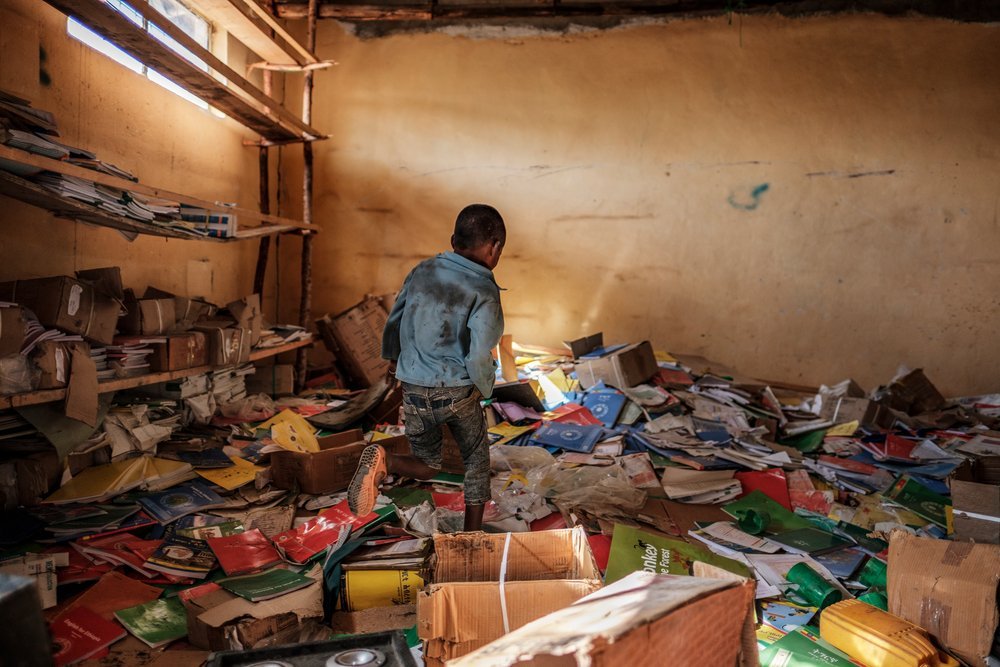 Eduardo Soteras Jalil
A child walks among books in the library of a former elementary school that was damaged during the fighting that broke out in Ethiopia's Tigray region, in the village of Bisober, on December 9, 2020.

The Tigray crisis in numbers

Background to the crisis

Tension between the federal government of Ethiopia and the Tigray People’s Liberation Front (TPLF), the ruling party of the Tigray region, had been building for weeks following regional elections held on 9 September.

Despite the constitutional postponement of national elections due to the COVID-19 pandemic, the TPLF deemed the delay ‘unconstitutional’ and went ahead with the vote. This was declared illegal by the national government.

On 4 November, Ethiopia’s Prime Minister Abiy Ahmed then ordered military action against the TPLF, following an alleged attack on a major Ethiopian Army base. 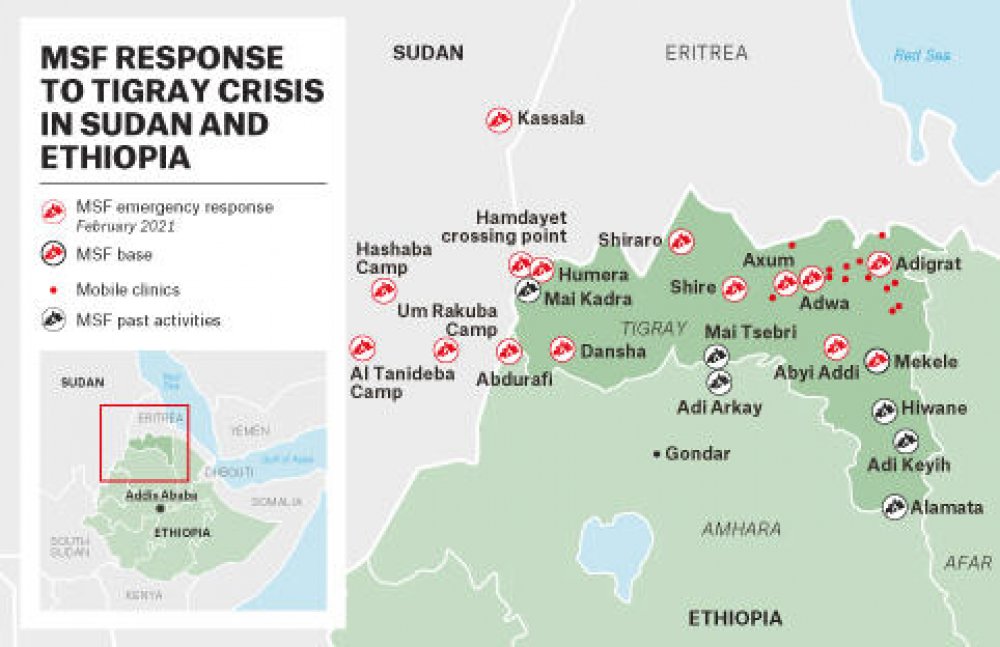 The UN estimates that nine million people who live in the Tigray region and bordering states may be impacted by this violence.

Should the fighting escalate, it’s estimated we could soon see massive displacements of up to one million people within and outside of Ethiopia.

Prior to the onset of hostilities, 600,000 people in Tigray were already dependent on food relief assistance.

However, with a six-month state of emergency for Tigray in place, a telecommunications blackout and limited to no access for international organisations, reliable casualty reports have been sparse and vary across media outlets.

Amnesty International reported a massacre of civilians took place in Maicadra on 9 November. By 23 November, UNHCR Sudan reported that more than 40,000 people had already registered as refugees, having crossed into Sudan.

We began triaging and treating war wounded people at the MSF-supported Ministry of Health Health Centre in Amhara on the morning of 5 November.

Since mid-December 2020, MSF teams have been providing medical care to some of the most affected people in need in the areas we’ve been able to access inside Tigray:

Between 18 December and 17 January, MSF teams in Hiwane and Adi Keyih provided 1,498 medical consultations. This intervention is now over.

Since 23 December, MSF has been supporting the hospital in Adigrat, the region’s second city. MSF medical teams have been running the hospital’s emergency room, as well as the medical, surgical, paediatric and maternity wards. They are also providing outpatient care for children under five.

By mid-February, we have seen 2,212 patients in the emergency room.

In the towns of Adwa, Axum, MSF teams are providing some of the displaced and local people with basic healthcare and supporting health facilities that lack essential supplies such as drugs, oxygen and food for patients.

MORE ON OUR WORK IN TIGRAY >

As the crisis unfolded in Ethiopia in early November 2020, thousands of refugees have crossed the border to Sudan. Many crossed a river in search of safety and some walked several days after having fled with just the clothes on their back.

Though the number of new arrivals has significantly decreased over the past few weeks, there are still new people arriving every day.

Until mid-February, the UN in Sudan has registered more than 61,000 refugees. 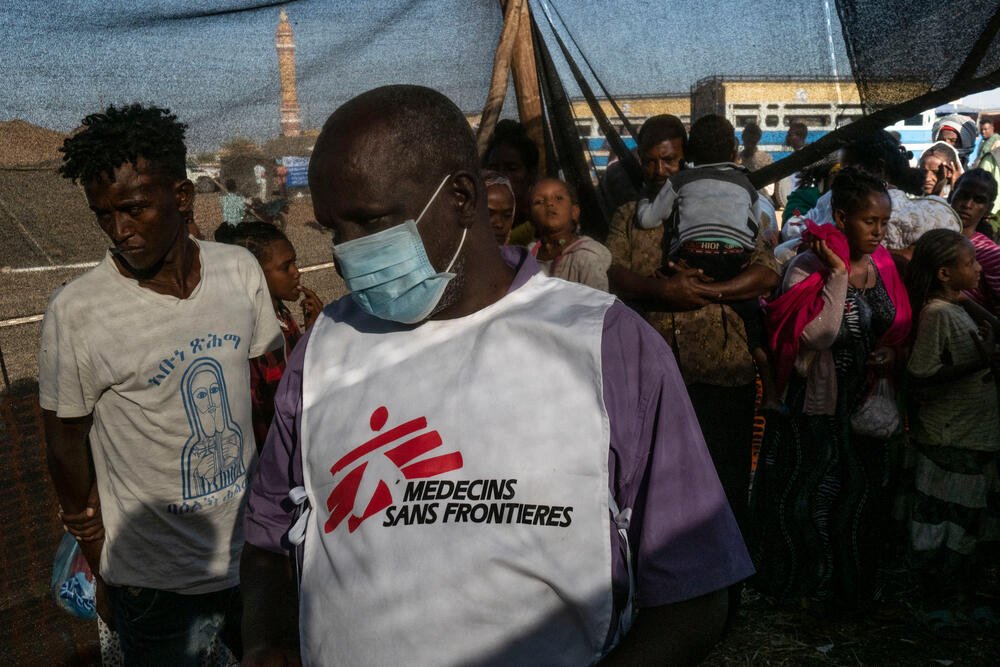 Nearly 10,000 - 12,000 refugees are located in the transit area and border area of Hamdayet where shelter, access to food, sanitation and clean drinking water continues to be an issue.

Most refugees in Hamdayet, especially those without shelter, are living throughout the village within the host community, while others live in the market seeking shelter in abandoned houses, shops and huts.

MSF is present at the border crossings and transit centres in Hamdayet, and Hashaba village.

In Um Rakuba refugee camp, MSF runs a clinic where we offer medical consultations, screen people for signs of malnutrition and help people with non-communicable diseases (like hypertension, diabetes, etc.).

In Al Tanideba camp, MSF started activities on 3 January by providing regular health screening for arrivals at the reception area of the camp.

We are providing water and sanitation, primary healthcare, vaccinations, malnutrition screening and we are supporting expectant mothers. We are currently building an inpatient clinic.

more on our work in sudan >