Italy has long been a landing point for migrants and refugees.

We are supporting four hospitals in Italy as the country responds to a large outbreak of COVID-19.

The current MSF team consists of about a dozen people, including Italian infectious disease specialists, anesthesiologists, nurses and logisticians, who are contributing their experience in managing epidemics in the countries where MSF works.

The team is supporting infection prevention and control activities in these facilities, as well as doctors and nurses caring for patients who have been hospitalised with coronavirus and need treatment.

Although numbers were significantly down on previous years, still more than 20,000 people arrived on Italian shores in 2018, many of them traumatised by the sea crossing and prior detention in Libya. 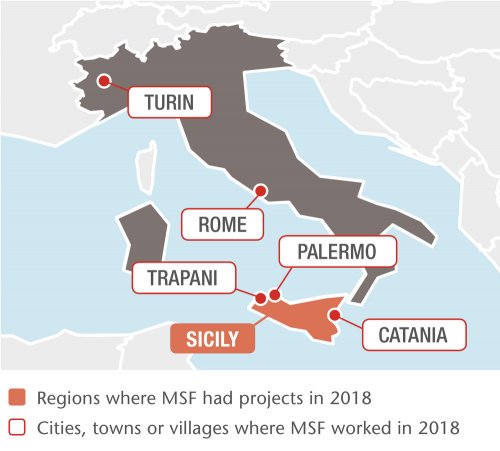 New arrivals face many health challenges when reaching Italy, in both reception and detention centres.

Amid increasingly hostile manoeuvres by Italian authorities to shut down search and rescue operations, Médecins Sans Frontières (MSF) continued to provide psychological and medical assistance to migrants and refugees in Italy, including specialised care for victims of torture.

Our teams offered psychological first aid to those disembarking in southern ports, and ran a clinic in Catania for patients requiring care after discharge from hospitals in Sicily. The clinic closed at the end of the year due to the drop in new arrivals. MSF psychologists also supported asylum seekers in reception centres in the province of Trapani, handing over activities at the end of the year as planned.

We sent mobile teams to work in informal settlements around Rome, where migrants often languish in poor living conditions. Alongside a network of civil society organisations and volunteers, our teams carried out around 1,500 medical consultations and psychological interventions in 2018, as well as offering psychosocial assistance to unaccompanied minors in reception centres in Rome.

For the third consecutive year, we ran a centre in Rome for the rehabilitation of victims of torture, ill-treatment and other forms of degrading treatment. Victims of torture can access psychological, medical, legal and social support at the centre, which we run in collaboration with local partners Medici Contro la Tortura and ASGI.

In Turin and Palermo, we provided support and orientation to more than 800 people to access national health services. We also distributed relief items such as blankets and tents to migrants and refugees living in informal settlements, in particular in Rome and around Italy’s northern borders.