In Jordan, Médecins Sans Frontières (MSF) offers reconstructive surgery to war-wounded patients from across the Middle East, and healthcare to Syrian refugees and host communities

A small country with considerable influence, Jordan plays an important role in the pursuit of power in the Middle East. 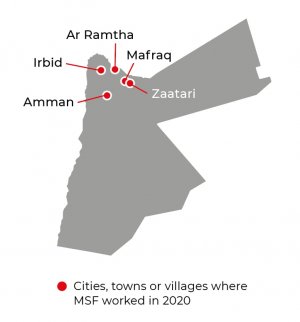 A US ally and one of only two Arab nations to make peace with Israel, the other being Egypt, it is considered one of the safest countries in the region.

Médecins Sans Frontières/Doctors Without Borders (MSF) first began working in Jordan in 2006 in response to the medical needs of Iraqi refugees.

When the Jordanian government imposed a strict lockdown between mid-March and end May because of the COVID-19 pandemic, we had to adapt, change or suspend our projects.

Our reconstructive surgery hospital in Amman offers comprehensive care to patients injured in conflicts across the Middle East. However, border closures at the beginning of the pandemic forced us to suspend admissions for some months and limit activities to essential surgery for existing patients.

As cases peaked in November, we responded to the health ministry’s request for assistance by opening a 40-bed dedicated COVID-19 ward in the hospital. The ward was shut at the end of December, following a reduction in cases.

Our two clinics in Irbid governorate provide Syrian refugees and vulnerable Jordanians with treatment for NCDs such as diabetes and hypertension, leading causes of death in the region. Our services include medical and mental healthcare, psychosocial support, physiotherapy and health education. In March, when the lockdown started, we switched to phone-based consultations and door-to-door medicine refills.

Our mental health projects in Irbid and Mafraq also conducted remote consultations until it was safe for patients to return to the clinic.

At the start of the COVID-19 pandemic, in response to needs identified by UNHCR, the UN refugee agency, we supported the treatment of patients with the virus inside Zaatari camp. It was assumed that COVID-19 would spread quickly in the camp and overwhelm public hospitals. We assessed the needs and opened a small treatment centre, where we offered inpatient care in collaboration with the health ministry, UNHCR and other organisations. 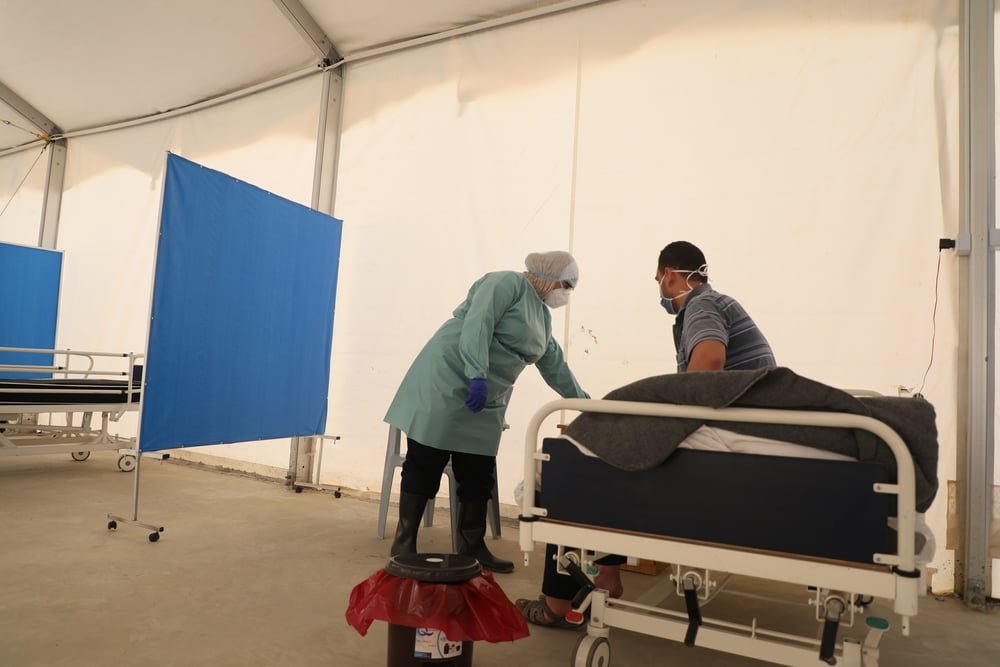 We also monitored the condition of confirmed patients and their contacts, and transferred patients in need of care to our treatment centre. More serious cases were referred to the public hospital in Mafraq.

Despite the cessation of hostilities in southern Syria and the reopening of the border with Jordan at Jaber in 2018, only a small proportion of Syrian refugees have returned to their homes. There are still more than 650,000 Syrian registered refugees in Jordan, most of whom rely on humanitarian assistance to meet their basic needs.

In early 2019, the Jordanian government reinstated subsidised healthcare for Syrian refugees, which was suspended in 2018.

Our two clinics in Irbid governorate provide Syrians and vulnerable Jordanians with treatment for non-communicable diseases, a leading cause of death in the region. The teams offer medical and mental healthcare, including home visits, psychosocial support, physiotherapy and health education, to patients with diseases such as diabetes and hypertension. In 2019, we carried out 3,720 individual and group mental health consultations. 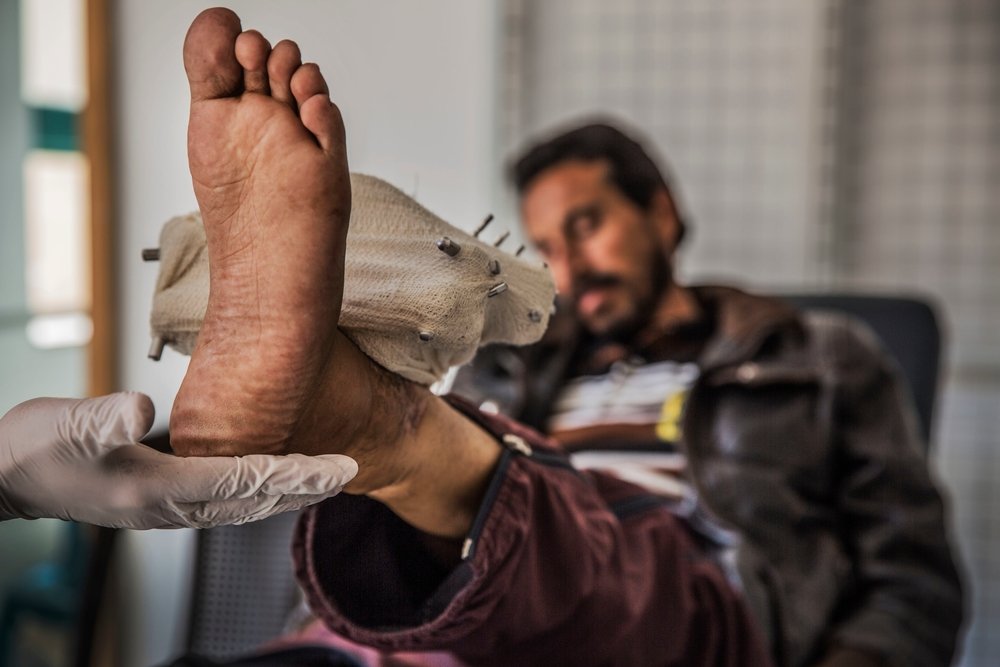 In 2019, we handed over our neonatal care project in Irbid, which we opened in 2013 during an acute phase of the Syrian refugee emergency, to the International Medical Corps. Between 2013 and 2019, our staff assisted 17,272 births, including 1,365 caesarean sections, and admitted 2,779 newborns to hospital for treatment.

Our reconstructive surgery hospital in Amman provides comprehensive care to patients injured in wars across the Middle East. We treat around 200 patients a month from places such as Yemen, and Gaza in Palestine, who have to make long and difficult journeys to reach the hospital. Our services include orthopaedic, plastic and maxillofacial surgery, physiotherapy, mental health support and fitting prosthetics. 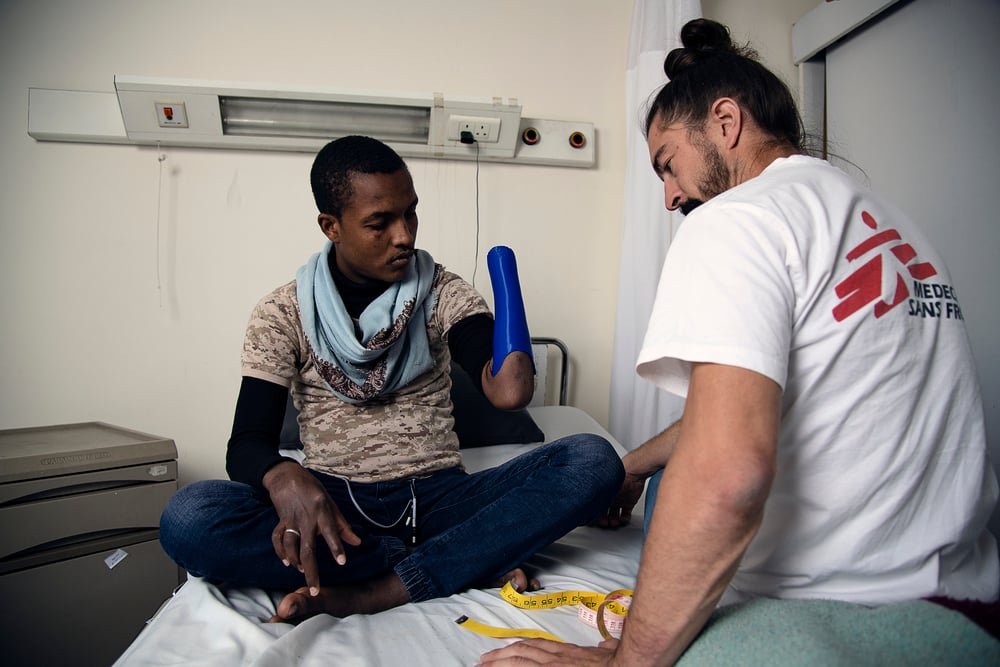 Hussein Amri/MSF
Abdallah, 21, was shot in the upper limbs during a bombing in Yemen in 2017. In order to facilitate the autonomous placement of his prosthesis, the team has developed a socket that remains below the elbow.

Since 2016, we have been using 3D printing to create upper-limb prosthetic devices for patients. These prostheses help them to regain their autonomy and carry out many of the day-to-day activities that their injuries had prevented them from doing.

In Irbid and Mafraq we run mental health services for children and their families who have been affected by the Syrian war or its consequences, such as displacement and poverty. Many of the patients we see now are not struggling so much with their experiences of the war, as with the fact that they still cannot return home and are living in very difficult circumstances as a result.

We offer individual, family and dyad therapy – whereby the parent and child are treated together – and also run group sessions and education activities.