In Kenya, Médecins Sans Frontières (MSF) provides care for refugees, victims of sexual violence and drug users, while responding to public health challenges such as HIV, and in 2020, the COVID-19 pandemic.

Situated on the equator on Africa's east coast, Kenya has been described as "the cradle of humanity". 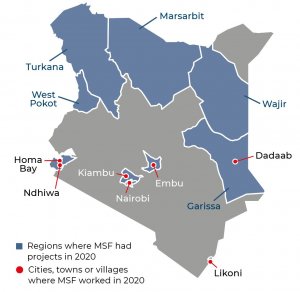 It has a population of over 48 million people.

Kenya was shaken by inter-ethnic violence which followed disputed elections in 2007. However, the next elections in 2013, passed off without violence and resulted in victory for Uhuru Kenyatta, the son of independence leader Jomo Kenyatta.

Kenya's military entered Somalia in October 2011 to curb the threat of the Islamist militant Al-Shabab movement, which it accused of the kidnap and killing of tourists and aid workers.

Since 2013 Al-Shabab has launched an increasingly deadly series of reprisal attacks in Kenya itself.

Médecins Sans Frontières/Doctors Without Borders (MSF) first worked in Kenya in 1987. Our work in the country has provided responses to endemic/epidemic disease and healthcare exclusion.

Despite the restrictions imposed on access to healthcare by COVID-19, and strikes by healthcare workers, Médecins Sans Frontières (MSF) continued to run programmes across the country. In Nairobi, medical services, phone-based counselling for victims of sexual and gender-based violence, and our trauma room and ambulance services were a lifeline for many patients, including women in labour.

In March, we launched our medical programme for people who use drugs in Kiambu. Our one-stop facility provides opioid substitution therapy, treatment for diseases such as HIV and tuberculosis, mental health support and wound care.

In Homa Bay, our team continues to work on improving HIV care, focusing on patients with advanced HIV, as well as children and adolescents. Reducing the mortality at the county’s apex hospital through better identification, management, and follow-up of patients with critical conditions remains a priority for MSF.

n Embu county, we are working to decentralise and integrate treatment for non-communicable diseases (NCDs) such as hypertension, diabetes and epilepsy, within 11 existing general health centres. The project involves mentoring Ministry of Health staff in the care and management of NCDs, as well as guaranteeing continuity of treatment for patients.

Our project in Likoni, Mombasa county, offers maternal and neonatal care. We also assist births and offer ante and postnatal services. In Dagahaley camp, which hosts some 70,000 refugees, we run a 100-bed hospital and two health posts. Our comprehensive services, which are also available to the host community, include sexual and reproductive healthcare, emergency obstetric surgery, medical and psychological assistance to victims of sexual and gender-based violence, psychosocial counselling, home-based insulin treatment, palliative care and specialist referrals.

In response to the COVID-19 pandemic, we ran a 40-bed isolation facility in the camp and trained staff working for Garissa and Wajir district health authorities on infection prevention and control measures, screening and collecting swabs for testing.

Kenya is MSF’s largest programme outside a conflict zone or emergency crisis. In the sprawling slums of Nairobi and in the three-decade-old Dadaab refugee camp, for example, many people still struggle to obtain effective diagnosis and care for lifethreatening diseases

In Homa Bay, we continued to work on improving HIV care and reducing transmission and mortality rates. We finalised a study to assess the results of the new approaches implemented in our HIV activities in Ndhiwa subcounty between 2014 and 2018.

The programme, aimed at reducing new infections through treatment as a prevention strategy, is based on the idea that an HIV-positive person whose viral load is suppressed by effective treatment is unable to transmit the virus to others. We tested as many people as possible, put all HIV-positive patients on treatment and worked on the quality and continuity of care to help them achieve viral suppression. 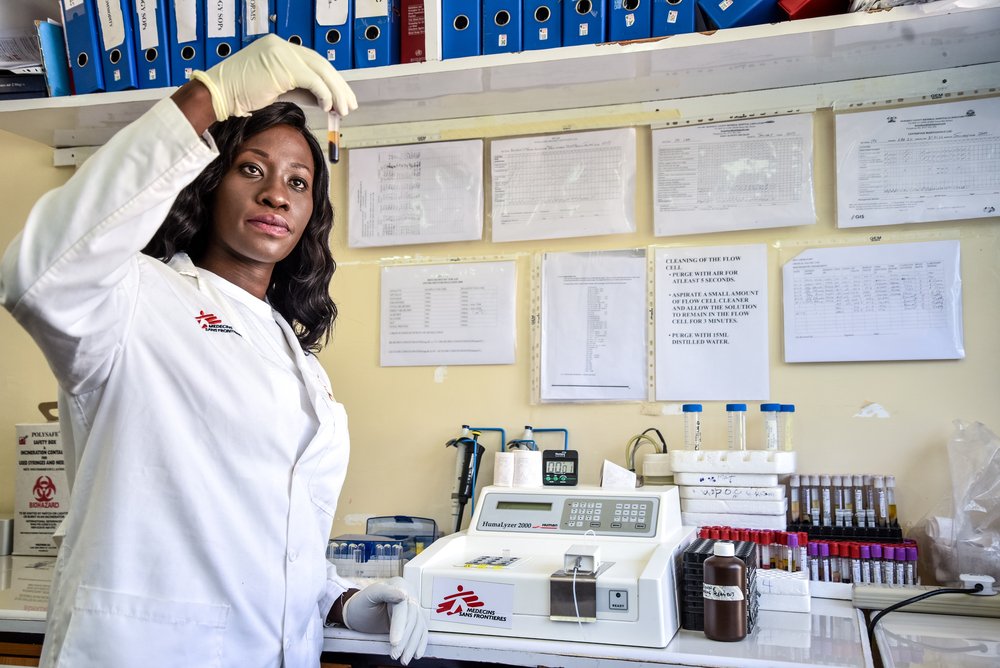 Paul Odongo/MSF
May Atieno is the Lab Manager for MSF’s programs in Homa Bay and Ndhiwa. She helped design several systems to ensure efficiency of the lab systems to improve over quality of care.

The study was completed in early 2019 and showed promising results. The findings are due to be published in 2020. In 2019, we supported HIV services in 30 government health facilities.

We focused on improving the holistic management and follow-up of advanced HIV patients, paediatric and adolescent care, and management of patients on second- and third-line antiretroviral therapy (ARV), as well as ARV treatment failure.

In Likoni subcounty, Mombasa, we support the Department of Health to provide comprehensive emergency obstetric and neonatal care in the fully renovated Mrima health centre.

Our teams there assist an average of 6,000 births every year, perform lifesaving obstetric surgery and support ante- and postnatal care, as well as screening for cervical cancer, HIV and other sexually transmitted diseases. 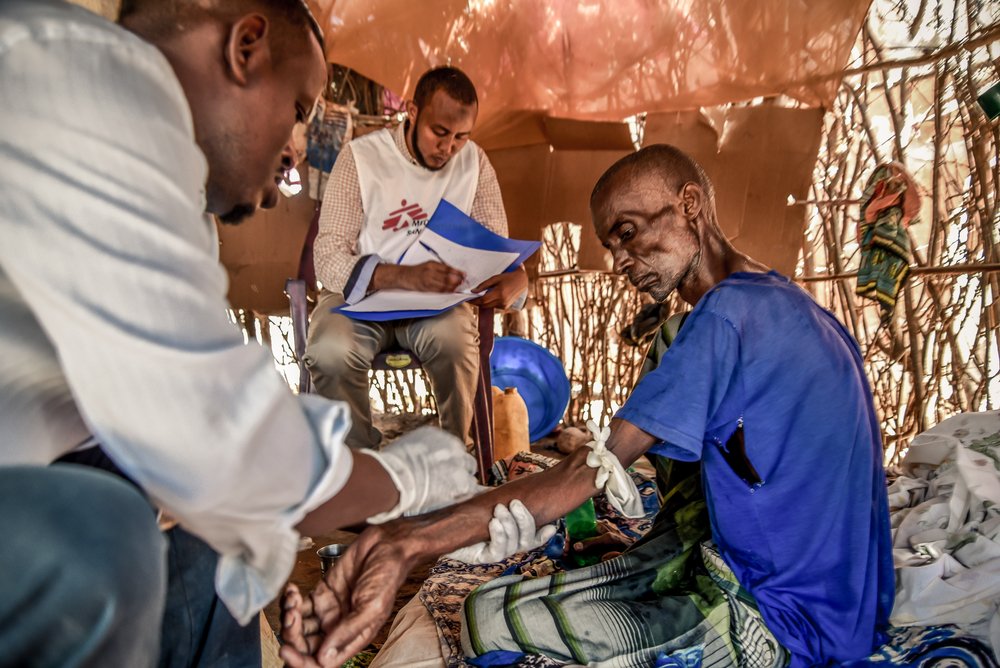 Paul Odongo/MSF
A patient with cancer of the oesophagus is cared for through MSF’s palliative care programme in Dagahaley, part of Dadaab refugee camp. Kenya, November 2019.

In August, the second cohort of 18 trainees taking part in our staff mentoring scheme graduated, having successfully completed their modules. They are now able to manage patients with non-communicable diseases independently.

We support the adult medical wards (90 beds) in Homa Bay county referral hospital. In 2019, 3,054 people were admitted, most with severe underlying chronic and non-communicable. 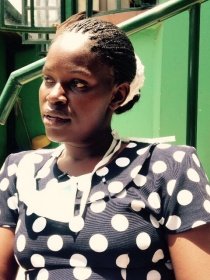 I'm cured, but my fight against TB isn't over >

Medical care for people who use drugs in Kiambu

Many people who use drugs in Kiambu county had to travel to the capital, Nairobi, for opioid substitution treatment, as there were no medically assisted therapy clinics locally. They often had to visit several other facilities to obtain medical care and psychosocial support. In September, we opened a clinic in Kiambu, offering a one-stop service centre for drug users, comprising opioid substitution therapy, treatment for HIV, TB, hepatitis C and non-communicable diseases, wound care, mental health support and counselling, and sexual and reproductive healthcare.

care for victims of violence

MSF runs a trauma room in Mathare, Nairobi, to treat victims of urban violence in the city’s Eastlands area. The clinic is supported through a 24-hour, toll-free call centre and an ambulance programme that offers emergency care to patients and refers them for further treatment when necessary.

We also run a clinic providing specialised care for victims of sexual and genderbased violence in Eastlands, in addition to supporting Ministry of Health facilities.

Services include medical consultations, treatment to prevent the transmission of HIV and sexually transmitted infections, pregnancy tests, swabs for legal purposes, psychological counselling and referrals for social and legal support. In 2019, our teams treated over 260 patients each month. . 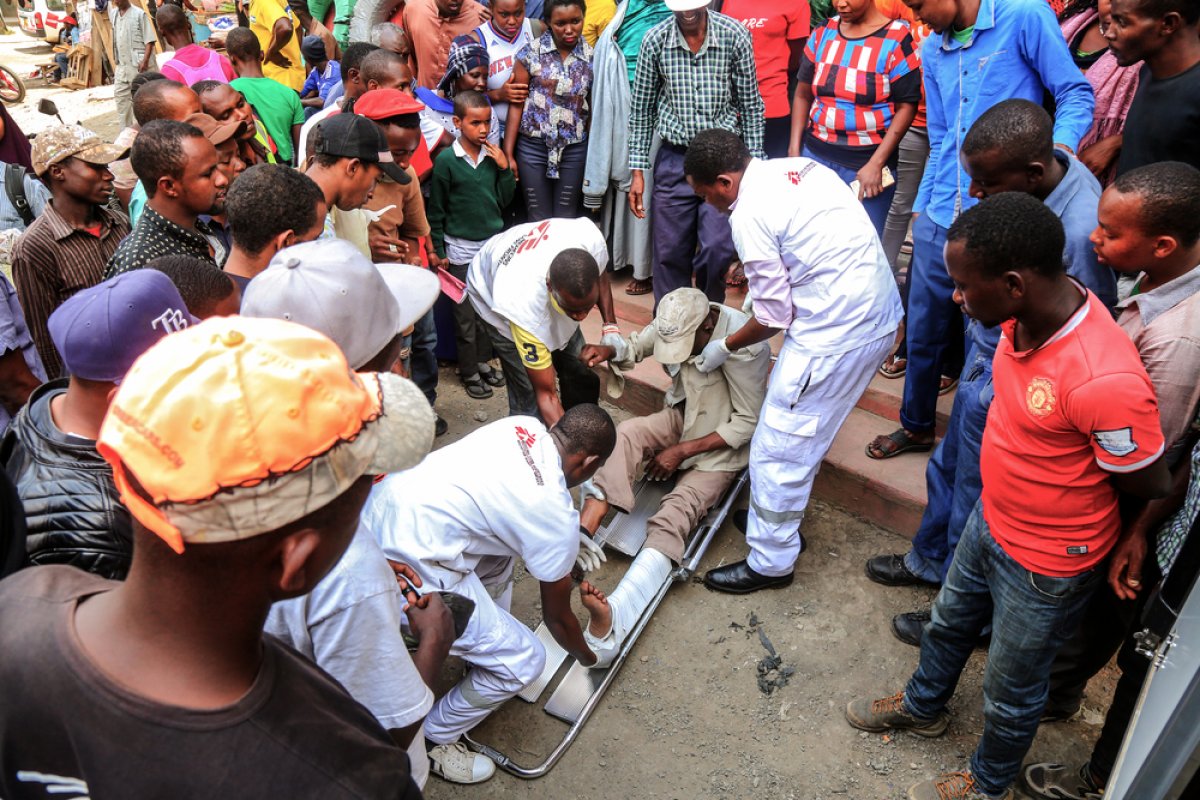 We continue to support a 100-bed hospital and two health posts in Dagahaley camp in Dadaab. Our health services benefit not only refugees, many of whom have been in the camp for close to 30 years, but also local communities. Our comprehensive general and specialist healthcare programme in Dagahaley includes sexual and reproductive healthcare, emergency obstetric surgery, medical and psychological assistance to victims of sexual and gender-based violence, and psychosocial counselling.

We also offer home-based insulin treatment, palliative care and specialist referrals. In 2019, we conducted more than 210,000 outpatient consultations, admitted close to 10,000 patients for care and assisted over 2,800 births.

The high incidence of snakebites in Baringo county, northwestern Kenya, has been largely under-reported due to a lack of appropriate monitoring tools. For three months, an MSF team trained medical staff in prevention strategies and administering antivenoms and first aid to snakebite victims. 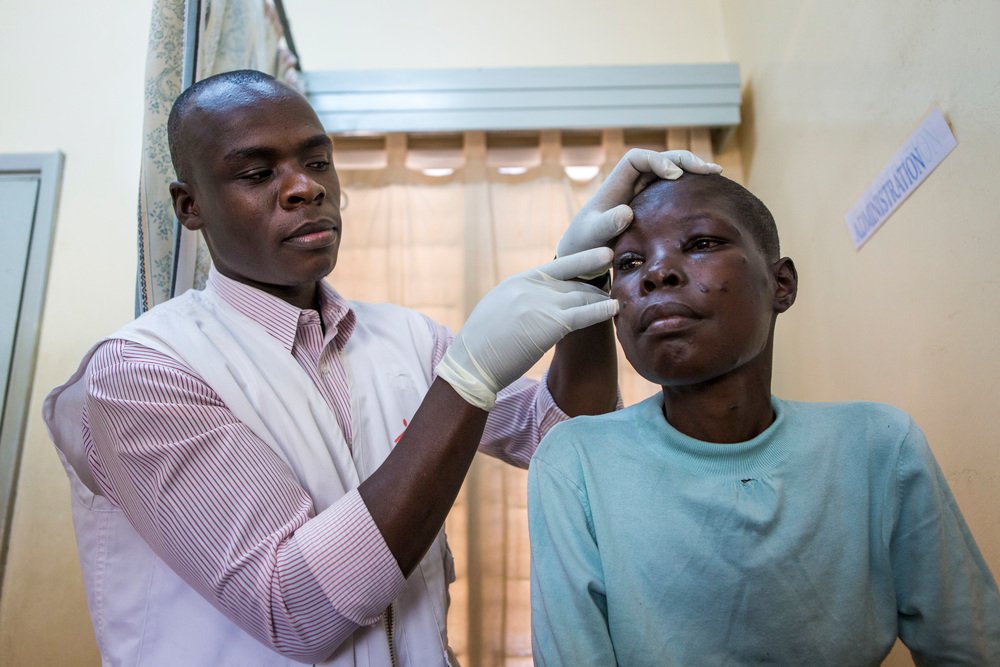 We also donated antivenom vials to boost the county’s supplies. In addition, we responded to malaria outbreaks in Baringo and neighbouring Turkana county. In September, more than 45,000 people tested positive for malaria, in the worst outbreak in Turkana since 2017.

Heavy rains later in the year led to flooding and displacement in some parts of the country. In West Pokot county, when flooding and landslides forced many people to flee their homes, we donated medical supplies and treated mosquito nets. We also provided emergency relief items and food to the most affected refugees in Dagahaley camp.