After nearly a decade of working in Lesotho, MSF handed over all its projects to the government in November 2015

The beautiful, culturally-rich mountain Kingdom of Lesotho (pronounced le-soo-too) is an alpine country of highlands and lowlands, completely surrounded by South Africa. 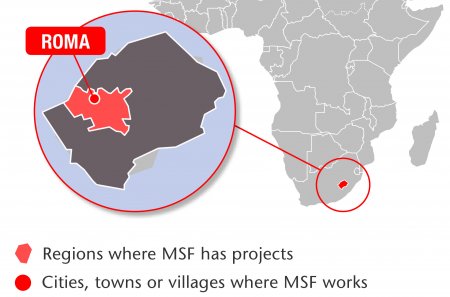 Scattered with spectacular canyons and thatched huts, Lesotho has a population of just under two million people and is one of the few African countries to regularly see snow.

But, theses breath-taking landscapes come at a price.

As many of its villages can only be reached on horseback, by foot or in light aircraft, women in Lesotho face numerous risks in accessing maternal care.

The country also has one of the highest rates of HIV/AIDS in the world. To combat this, Médecins Sans Frontières/Doctors Without Borders (MSF) began working in the country in 2006.

Women’s Health: A safe start to life in Lesotho >

After nearly a decade of working in Lesotho, MSF handed over all its projects to the government in November 2015.

During its time in the country, MSF focused mainly on providing free maternal care to women, as well as family planning and HIV treatment. There is a high prevalence of HIV in Lesotho (27 percent among pregnant women) and this, along with tuberculosis (TB) co-infection, contributes to high rates of maternal death.

Family planning services, ante- and postnatal care were offered at the MSF-supported St Joseph’s district hospital in Roma, six health clinics in the lowlands and three clinics in remote Semonkong.

Within a year of MSF covering all expenses for antenatal care and deliveries at St Joseph’s Hospital, the number of women giving birth there increased by 45 percent. During 2015 an average of 130 babies were being delivered there every month.

MSF also trained and mentored local staff at these facilities in how to provide integrated care for patients co-infected with HIV and TB.

Local counsellors and community health workers initiated and followed up antiretroviral (ARV) treatment. Viral load monitoring was also expanded, and lay counsellors were trained to deliver adherence counselling to help patients understand the importance of sticking to their ARV treatment.

As a result, by the time MSF left, over 80 percent of first-line ARV patients had attained virological suppression.