In 2020, refugees, asylum seekers and migrants trapped in war-torn Libya were left even more vulnerable as armed conflict escalated and COVID-19 spread across the country

On the North African shore of the Mediterranean Sea, Libya – a mostly desert and oil-rich country – has an ancient history stretching back to the time of the Romans. 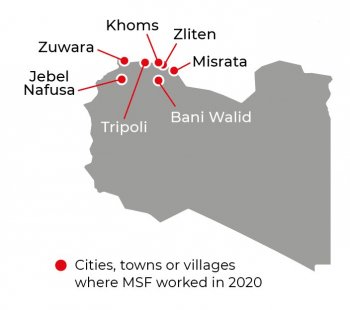 More recently, it has been renowned for the capricious 42-year rule of Colonel Muammar Gadaffi and is now a springboard for migrants and refugees heading for Europe.

Following years of conflict, a new UN-backed "unity" government is installed in Tripoli. It faces opposition from two rival governments and a host of militias.

The country is crisscrossed by many dividing lines, along which the so-called ‘Islamic State’ has risen in power.

Médecins Sans Frontières/Doctors Without Borders (MSF) first began working in Libya in 2011, when the country was plunged into chaos after fighting between rival factions caused people to flee their homes.

Although some detention centres closed in 2020, thousands of men, women and children remained held in overcrowded, unsanitary conditions with little access to healthcare, insufficient food and drinking water, and no possibility of physical distancing. Médecins Sans Frontières (MSF) continued to provide medical and mental healthcare in detention centres in Tripoli, Khoms, Zliten, Zuwara and Zintan. Our teams also worked to improve access to water and other basic services, reinforce COVID-19 infection prevention and control measures and refer the most vulnerable cases to protection agencies.

In February, a 26-year-old Eritrean man lost his life when a fire broke out in the overcrowded Dhar El-Jebel detention centre in Zintan. We offered psychological support to survivors of the fire and distributed basic necessities to replace items they had lost, while reiterating our call for the end of arbitrary detention of migrants and refugees in Libya. 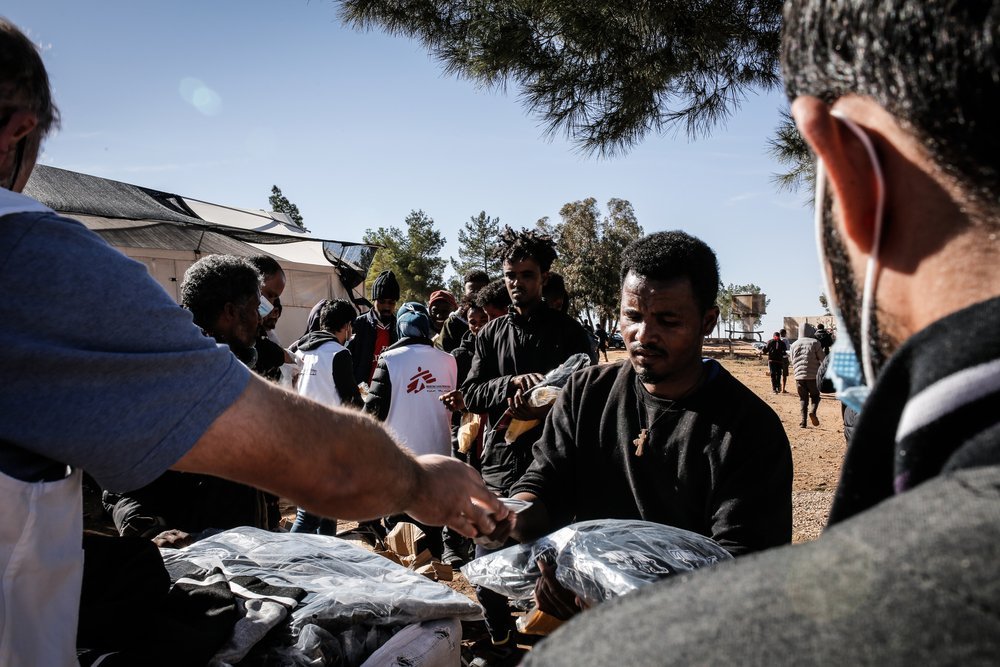 The vast majority of the estimated 650,000 migrants currently in Libya live on the streets, exposed to arbitrary arrest and detention, human trafficking, exploitation and severe violence. Most of those detained are in clandestine prisons and warehouses run by people smugglers rather than official centres. In Bani Walid, our teams offered general healthcare and medical referrals to refugees and migrants who had escaped from captivity, and to victims of torture and trafficking.

Throughout 2020, refugees and migrants were subjected to numerous violent attacks; for example, at disembarkation points where the Libyan coastguard forcibly returns those who try to flee. On 28 July, our teams responded with medical and psychological care after a shooting at a disembarkation site in Khoms that left three teenagers dead.

Tuberculosis (TB) care is another focus of our activities in Libya. Our teams work in three TB facilities: two in Tripoli and one in Misrata, a 17-bed clinic that we opened in March.

According to the United Nations refugee agency, UNHCR, there are more than 355,000 internally displaced people and nearly 50,000 registered refugees in the country.

In 2019, Médecins Sans Frontières (MSF) treated men, women and children who had been arbitrarily detained in official detention centres run by the Libyan authorities, as well as those who had escaped clandestine prisons run by traffickers.

Our teams also provided care to people who had been intercepted at sea by the EU-funded Libyan coastguard and forced back to Libya, the country they had been trying to flee.

The overcrowded facilities do not have enough drinking water, latrines or ventilation, and detainees have little access to medical assistance. We treated people for scabies, lice and fleas, as well as infectious diseases such as tuberculosis (TB), which spread easily in squalid conditions. In Dhar El-Jebel, we started an intervention for 500 people detained in the centre, after 22 died from TB.

In addition, our teams treated patients for malnutrition resulting from the lack of food in the centres and carried out mental health activities, supporting people living with the trauma of indefinite detention 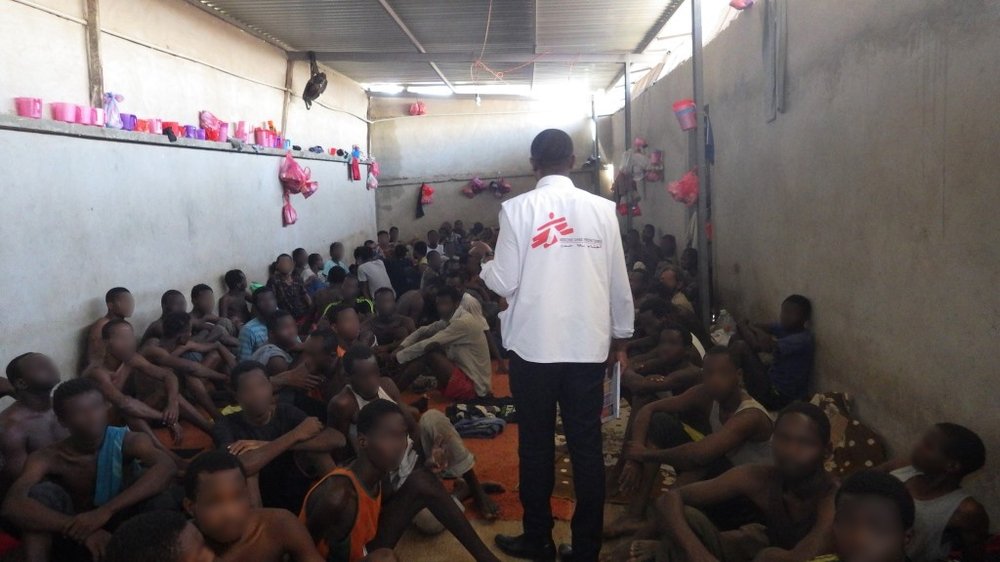 MSF
Conditions inside the detention centres do not meet any national, regional or international standards.

Most migrants and refugees are believed to be detained in unofficial prisons, out of reach and out of sight. In Bani Walid, we provided medical assistance to people who had managed to escape captivity, many of whom had been tortured. 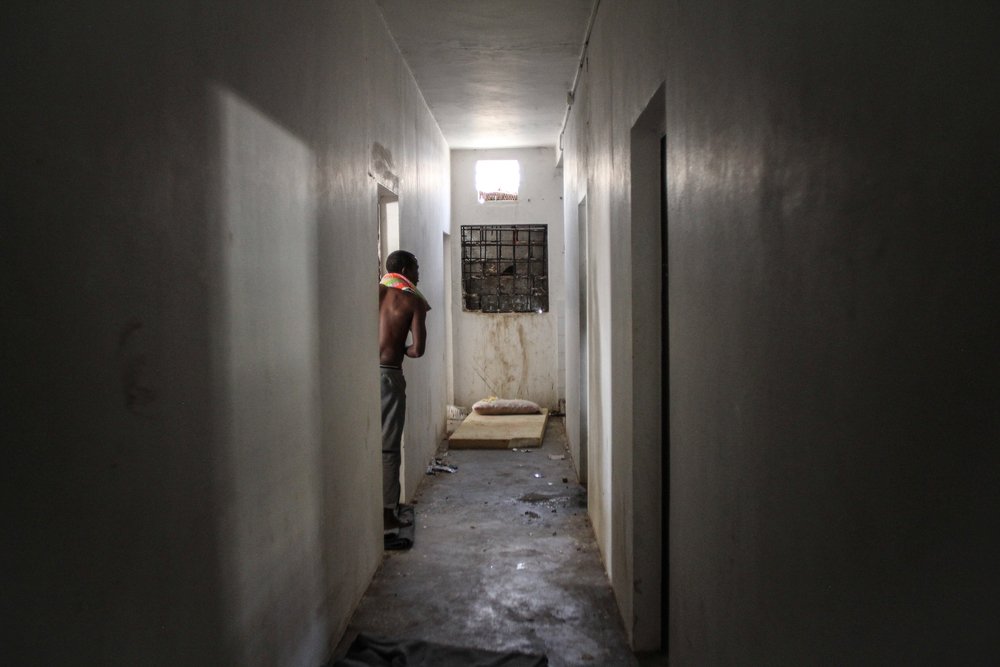 On 2 July, an airstrike hit the Tajoura detention centre and instantly killed at least 53 people – the deadliest attack on civilians since the start of the conflict. We sent ambulances and a medical team to assist survivors, including mental health staff to support people left in limbo and in fear for their lives.

In port areas of Khoms, our teams offered general healthcare to people who had been forcibly returned to Libya, including minors and asylum seekers, and to survivors of shipwrecks.

The closure of detention centres led to increasing numbers of migrants and refugees living on the streets. More and more people were left stranded and vulnerable to human trafficking, violence, forced labour and exploitation. As the conflict intensified and the deterioration of public health services started to affect Libyan nationals, we also conducted outpatient consultations in Misrata. 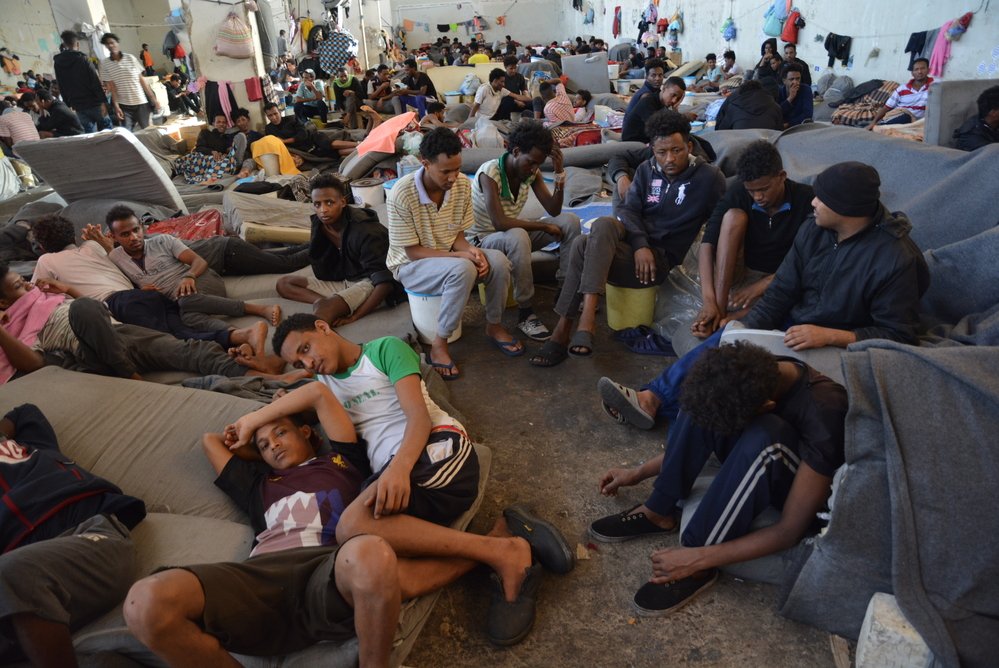 Jérôme Tubiana/MSF
Some of the 700 refugees detained in the main warehouse of Zintan detention centre. In June 2019, the detainees were distributed among other buildings within the compound. Libya, July 2019.

As well as continuing to denounce the unacceptable situation in official and unofficial detention centres, MSF called on the UN to scale up its intervention in Libya to provide protection and assistance for refugees, asylum seekers and migrants trapped there. We also advocated an immediate end to forced returns, and ultimately, the evacuation of all migrants and refugees from a country at war to a place of safety.