Médecins Sans Frontières (MSF) has been providing healthcare to Rohingya and other undocumented migrant communities in Malaysia since 2015.

Médecins Sans Frontières (MSF) has been providing healthcare to stateless Rohingya and other refugee communities in the Malaysian
state of Penang since 2015.

Malaysia is not a signatory to the 1951 UN Refugee Convention, and asylum seekers and refugees are criminalised by domestic law. The constant threat of arrest and detention is a major source of stress for an already vulnerable population; it discourages health-seeking behaviour and can cause patients to abscond from hospital, interrupting treatment.

Rohingya have been coming to Malaysia to escape discrimination in their native Rakhine state, Myanmar, for decades. While the urban environment in Malaysia offers refugees and asylum seekers some anonymity, there are few safety nets. Malaysia is not a signatory to the 1951 UN Refugee Convention, meaning refugees and asylum seekers are effectively criminalised by domestic law. In addition, they have no direct access to the UN refugee agency UNHCR.

The lack of legal status leaves them in a state of permanent stress. The constant fear of arrest, detention and even deportation pushes them underground. Most are reluctant to venture outside and delay seeking healthcare, even in emergencies, in case hospital staff report them to immigration services.

Unable to work legally, they often disappear into Malaysia’s urban black-market economy, where they are vulnerable to exploitation, debt bondage or work accidents.

To respond to the gap in services for this vulnerable group, MSF provides healthcare, as well as mental health education, psychosocial support and counselling, via communitybased mobile clinics and a fixed clinic in Penang.

In 2019, our teams carried out more than 8,740 consultations at the fixed clinic and the mobile clinics run in partnership with the NGO ACTS. In addition, our teams offered nearly 490 basic healthcare, psychosocial support and counselling consultations in five government shelters for the protection of survivors of human trafficking (TIP shelters).

These are located in Kuala Lumpur, Negeri Sembilan and Johor Bahru. After working for more than 18 months in the shelters, we ended these activities in late 2019. 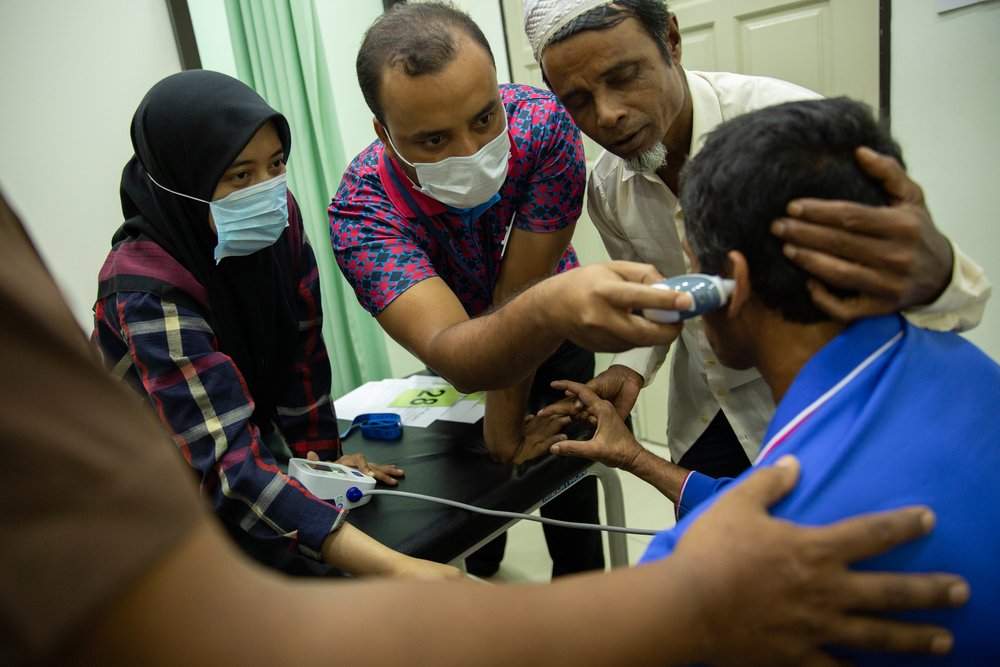 Arnaud Finistre
A Rohingya man is examined at the MSF clinic in Penang, Malaysia, in April 2019, following a fall from the second floor while he was working on a construction site.

In partnership with MERCY Malaysia and SUKA Society, we provide medical care in the immigration detention centres in Belantik and Juru, respectively. During the year, MSF teams ran monthly mobile clinics and have been working to upgrade the water and sanitation systems at these centres, where many refugees and undocumented migrants are held.

In 2019, we continued to advocate unfettered, direct access by asylum seekers to UNHCR, as part of a proactive strategy to overcome the barriers to healthcare. Asylum seekers from Myanmar, most of whom are the stateless Rohingya, represent almost 90 per cent of the asylum-seeker population in Malaysia.

They are still barred from making asylum claims directly to UNHCR. MSF is one of the few NGOs that can refer asylum claims to UNHCR based on a set of additional vulnerability criteria. In 2019, we made 467 such referrals. 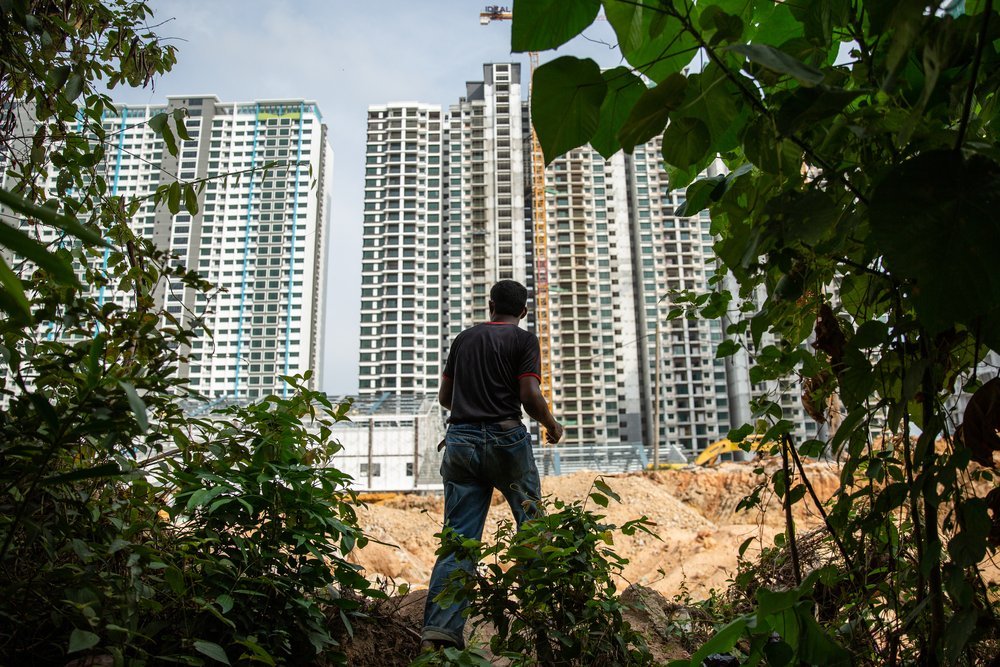 Arnaud Finistre
Muhammad, 25, a Rohingya refugee, is a construction worker on a condominium project in the Bayan Lepas district of Penang. He shares very basic accommodation on the site with other workers. Malaysia, April 2019.

We also work alongside other organisations – including UNHCR and MERCY Malaysia – and Malaysia’s ministries of health and home affairs on longer-term improvements to access to healthcare for refugees. This includes advocating measures to protect migrants from immigration enforcement when they seek medical care at public health facilities and developing sustainable health insurance schemes. We also train staff in Malaysia’s public healthcare system in understanding the needs and vulnerabilities of undocumented people.