Médecins Sans Frontières (MSF) responded to the COVID-19 pandemic across Mexico, supporting treatment and infection prevention in health facilities and centres for migrants and victims of violence.

Those who pass through Mexico, including Mexicans, are at great risk of kidnapping, extortion, physical and mental abuse, and even death. 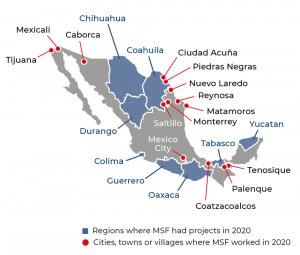 With a population of nearly 127 million people, Mexico is one of the most populous countries in the world.

Since 2007, the country's powerful drug-trafficking organisations have engaged in bloody feuding, resulting in tens of thousands of drug-related killings – terrorising millions.

Médecins Sans Frontières/Doctors Without Borders (MSF) has been working in Mexico since 1985 filling healthcare gaps and providing migrants with medical care.

In 2020, MSF organised a range of COVID-19 emergency responses in Mexico, which had one of the world’s highest number of deaths from the virus. In May, we began working in a hospital extension unit at Los Zonkeys stadium in Tijuana, Baja California, where patients with mild and moderate COVID-19 symptoms received treatment. In June, we handed the facility back to the health authorities. We also cared for patients with mild to severe COVID-19 in two dedicated centres set up in the campuses of Reynosa and Matamoros universities. These activities ended on 1 October. 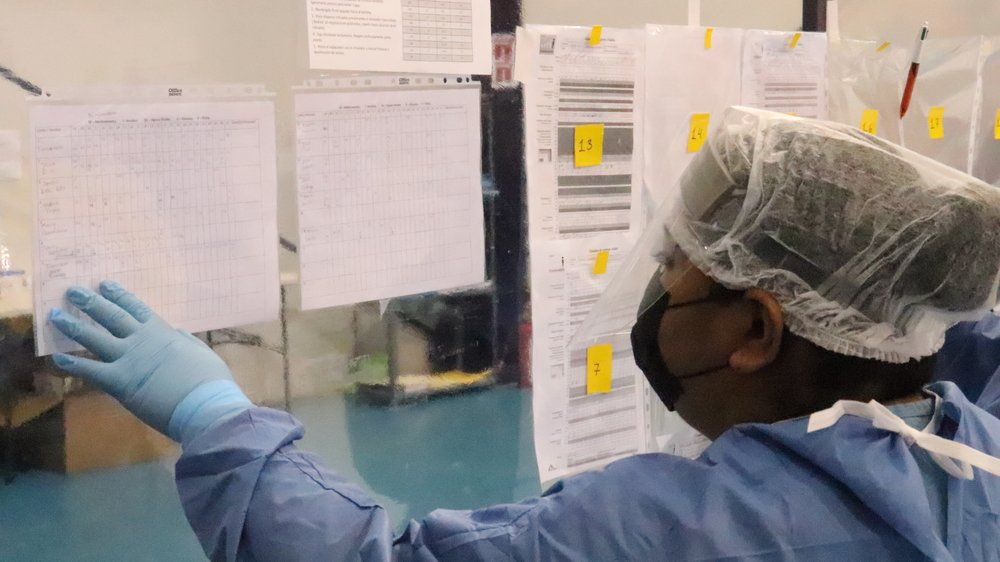 In addition, our teams conducted medical, psychological and social work consultations to assist migrants trapped at the northern border. We worked in all the migrant shelters in Nuevo Laredo, Reynosa and Matamoros, including an improvised asylum seekers camp. In Reynosa, we also continued to assist victims of violence and, in Guerrero, visited communities without access to health services due to pervasive violence. In the south, our teams continued caring for migrants through mobile clinics. In February we published the report No Way Out on the damaging health impact of US-Mexico migration policies. 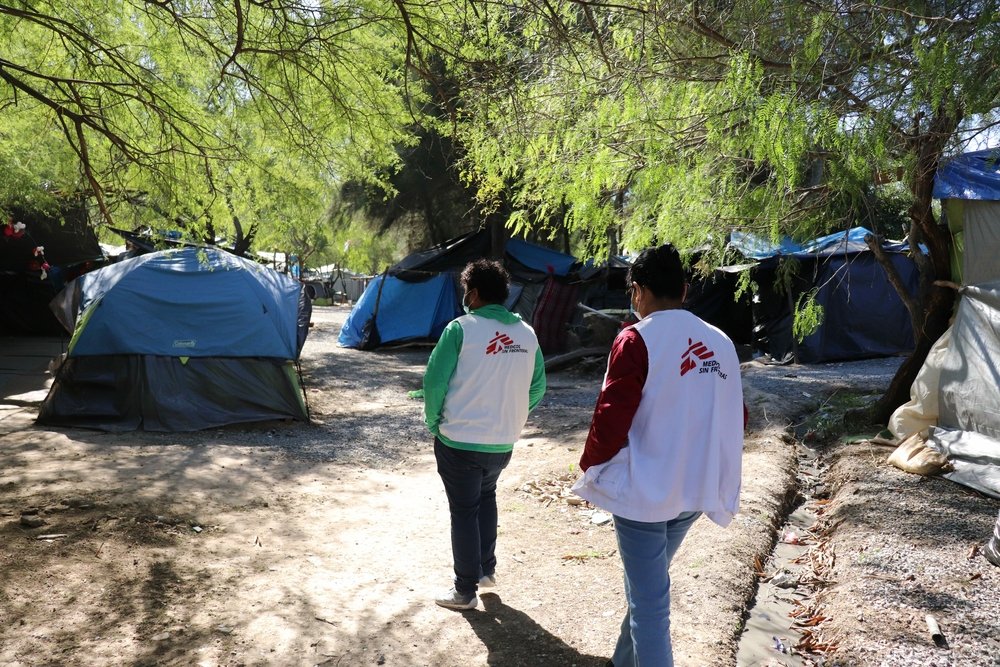 MSF/Cesar Delgado
Doctor and psychologist visiting their patients at the asylum seekers camp in Matamoros, Tamaulipas.

In Mexico City, we run a specialised centre offering medical and mental healthcare for migrants who have been victims of torture or extreme violence in their countries of origin or on their journeys.

MSF teams in Mexico scaled up their activities along the northern border with the US during 2019, as the collapse of the protection system for asylum seekers in the region and migration policies based on criminalisation, deterrence and containment trapped thousands of migrants in dangerous Mexican cities.

We saw an increasing number of women, children and entire families who had fled extreme violence and poverty in their home countries – Honduras, El Salvador and Guatemala, the so-called Northern Triangle of Central America – on a route previously undertaken mainly by men.

In February, we deployed a team to Piedras Negras, Coahuila state, to assist around 1,700 Honduran migrants who had taken shelter in an abandoned factory and were being prevented from leaving by the police and the military. The migrants were then forcibly transported by bus to other equally or more dangerous cities, such as Reynosa. 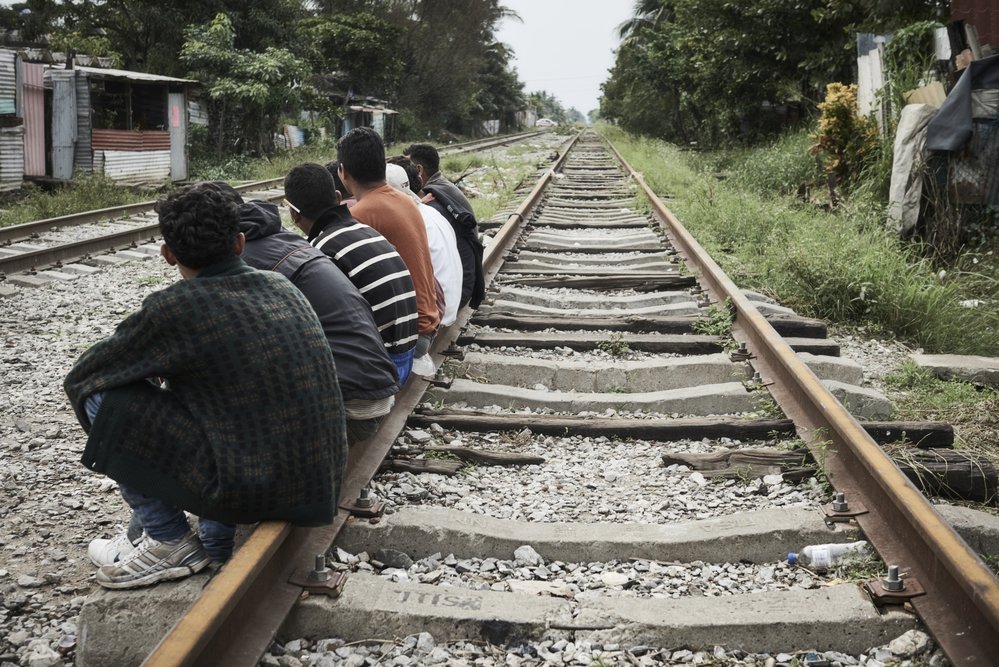 Christina Simons/MSF
Migrants stop to rest in Coatzacoalcos, a port city in the state of Veracruz. Mexico, December 2018.

Thousands of people from the Northern Triangle of Central America – El Salvador, Guatemala and Honduras – cross Mexico each year, the vast majority fleeing violence and poverty in their countries of origin. Far from finding security and protection once in Mexico, people on the move face high levels of violence, including kidnappings, extortion, inhumane treatment, abuse, sexual assault and torture at the hands of criminal groups acting with total impunity, especially in cities on the borders.

The US government’s zero tolerance policies and restrictions on granting asylum, coupled with an increase in ‘security’ at the border, have only aggravated the crisis.

Although the migratory flows were similar to previous years, in 2018 our teams saw an increase in the number of women, children and families attempting a route traditionally undertaken mostly by men.

In Tenosique, known to be one of the main points of departure for journeys through Mexico, we provided medical, psychological and social assistance to increasing numbers of vulnerable migrants and refugees at Shelter 72.

We have a team offering similar services in La Casa del Migrante in Coatzacoalcos, Veracruz, where each day hundreds of people stop off before continuing north. Most of the health issues we treat are a result of people’s arduous journeys, such as respiratory problems, skin infections, foot injuries and trauma from falls. Many of them have also suffered some kind of physical or psychological violence, including sexual violence. In 2018, we installed an additional mobile clinic beside the railway tracks in Coatzacoalcos to cater for migrants waiting to board trains.

MSF teams already working in Mexico City (at the Centre for Victims of Extreme Violence and Torture), in Tenosique and Coatzacoalcos in the south, and in Reynosa and Matamoros in the north, established bases in Mexicali, Nuevo Laredo and Monterrey to serve an increasing number of people facing overwhelming physical, bureaucratic and political barriers, and unable to find refuge.

Among those receiving care at the northern border were many Mexicans deported by the US. Nuevo Laredo is the official port of entry into the US from Tamaulipas state, and one of the major points of repatriation for Mexican nationals. Here, and in other northern cities, migrants and asylum seekers are subjected to ‘metering’, a practice that limits the number of people who can request asylum at a port of entry on the US–Mexico border each day. 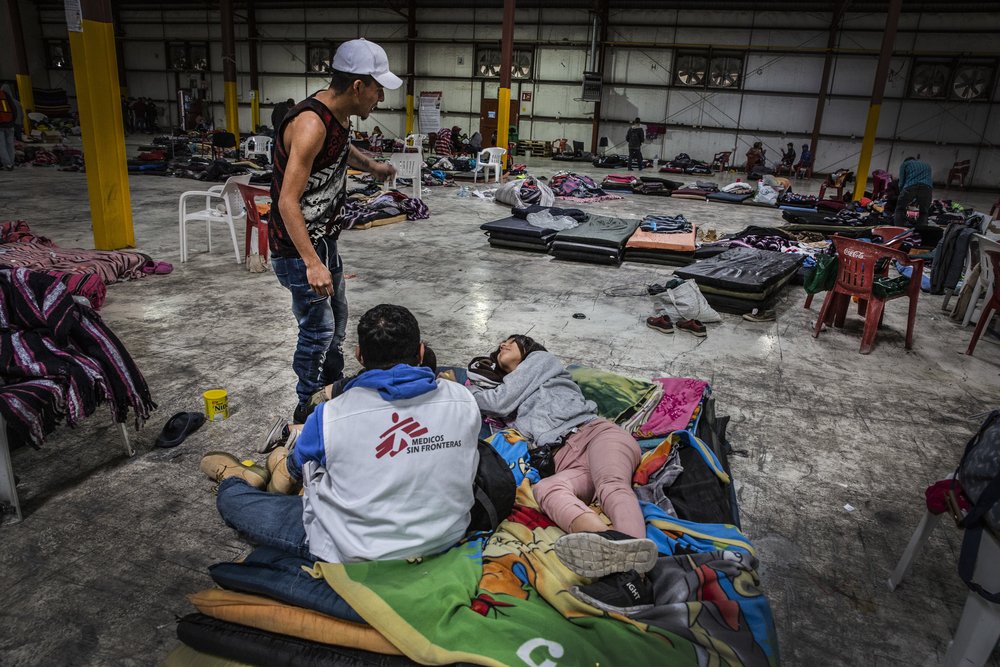 Juan Carlos Tomasi
A migrant talks to an MSF psychologist at the Piedras Negras Sports Pavilion. MSF’s work with migrants in Mexico is based fundamentally on psychological help.

From July 2019, Nuevo Laredo also began receiving people sent back to Mexico to await judicial resolution after having applied for asylum in the US, under the so-called Migrant Protection Protocols (MPPs). MSF assists migrants in several shelters across the town and has repeatedly warned of the danger of forcing people to remain in cities like Nuevo Laredo, which, of all the places where we work, is the one where migrants are most exposed to kidnapping and extortion.

Twenty-one per cent of the 643 migrants seen in our mental health programme in Nuevo Laredo in 2019 had been victims of kidnapping. Our patients have faced a long cycle of inescapable danger. Many were forced to flee their homes as the only option for survival and experienced targeted violence throughout the migration route in Mexico.

In Tamaulipas, they are vulnerable to more violence. In Mexicali, we set up a consultation room providing assistance to migrants, refugees, deportees, internally displaced people and those returned to Mexico under the MPPs.

In October, we also launched activities in Monterrey, one of the main migrant hubs on the northeastern route, with the objective of detecting patients in need of special care after incidents of extreme violence. In addition, we trained staff in shelters to identify such cases so they could be transferred to our specialised centre for victims of torture in Mexico City.

In 2019, we continued our project in Reynosa caring for victims of violence, including sexual violence, and Mexican returnees from the US. In April, we witnessed a rise in the number of migrants arriving in the city due to the ‘metering’ policy. We therefore had to increase our activities in order to maintain services for people living in the only shelter in the city.

This shelter has capacity for 150 people, but at times up to 450 people were living there, and there were an estimated 2,000 on the waiting list, living outside it, vulnerable to kidnapping, extortion, theft and sexual violence. 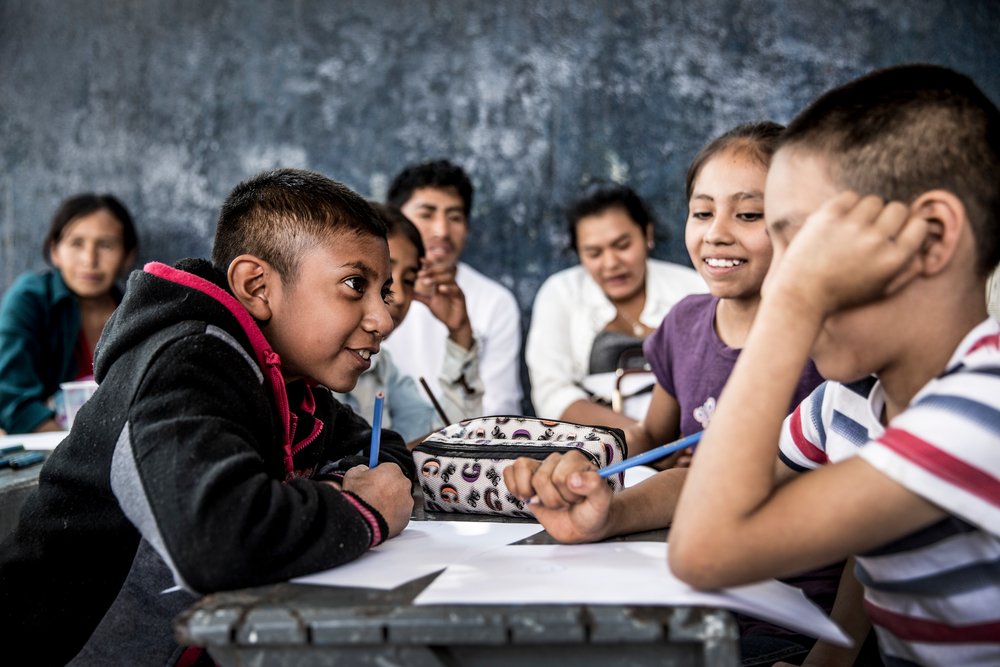 Juan Carlos Tomasi/MSF
Children during a group mental health session in a village in Guerrero state.

We also had to expand our operations in Matamoros city to assist people on the move. For the first months of the year, these were mostly Mexican returnees, but this changed in August, when the MPPs were implemented in the city and up to 100 asylum seekers forcibly returned to Mexico arrived each day.

An improvised camp was set up next to the international bridge but people there had no access to water, sanitation or any type of services.

In the south of the country, MSF works in the only shelter in Tenosique, a town next to the border with Guatemala, providing medical assistance and mental healthcare.

In Tapachula, the main port of entry into Mexico, we carried out a short intervention similar to the one in Monterrey to assist with the detection of victims of torture and extreme violence. In Coatzacoalcos, a transit point where travellers usually take a break before continuing their journey aboard the Beast, the freight train that runs through Mexico, MSF teams operate a mobile clinic.

In June, MSF denounced the Mexican authorities for carrying out raids and mass detentions, even while our teams were present assisting patients.

Although in Mexico ‘illegal entry’ is a civil offence and not a crime, apprehended migrants are locked up in detention centres and then deported to their countries of origin. We visited several detention centres and spoke out about the overcrowding, insufficient medical care, as well as the inadequate food, water and sanitation.

Increasingly, our staff in the north are seeing Mexicans who have fled from dangerous states such as Guerrero, where we also operate. Teams there assist communities affected or isolated by the pervasive violence in the area, perpetrated by numerous criminal groups. Three MSF teams run mobile clinics throughout Guerrero, targeting villages recently affected by attacks or violent events.