A humanitarian crisis is unfolding in Mozambique’s northern Cabo Delgado province, where escalating violence has displaced over half a million people.

The discovery of gas fields off Mozambique's coast in 2011 is set to transform the economy of one of Africa's poorest nations. 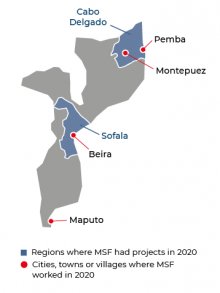 But despite recent economic growth, more than half of Mozambique's 28 million people continue to live below the poverty line.

In 2015, the country declared itself free of landmines - a legacy of the civil war.

Médecins Sans Frontières/Doctors Without Borders (MSF) has worked in the country since 1984, responding to the civil war and its after-effects, and epidemic diseases.

Médecins Sans Frontières (MSF) was forced to suspend activities in Mocimboa da Praia and Macomia villages in Cabo Delgado in March and May respectively, due to an upsurge in violence. We relocated our base to Pemba, where many displaced people had gathered in camps, and started delivering general health services and medical care through mobile clinics. Our teams built latrines, supplied water and supported cholera treatment centres.

In December, we sent a team to Montepuez, Cabo Delgado’s second-largest city, to increase access to general and mental health services and water supplies for vulnerable people.

MSF/Amanda Bergman
In December 2020, MSF launched a mental health programme in the Nangua and 25 de Junho IDP camps. These are the two most populous camps in Metuge, on the outskirts of Pemba, Cabo Delgado’s capital.

Our programme in the capital, Maputo, continues to provide specialised care for patients with advanced HIV, tuberculosis (TB) and other opportunistic infections. Around 2.2 million Mozambicans live with HIV, of whom 36 per cent are co-infected with TB.

MSF’s harm reduction programme for people who use drugs is the only one in the country, and implements all the interventions recommended by the World Health Organization. These include needle/syringe distribution, opioid substitution therapy and overdose treatment.

In Mafalala slum, MSF and a local organisation run a drop-in centre for people who use drugs, offering testing for HIV, TB and hepatitis C, and referrals for treatment.

In Beira, we are working to reduce HIV-related sickness and death by delivering sexual and reproductive healthcare, including HIV testing, counselling and family planning services, to vulnerable groups through mobile clinics. We also provide advanced HIV care at three health facilities in the city. 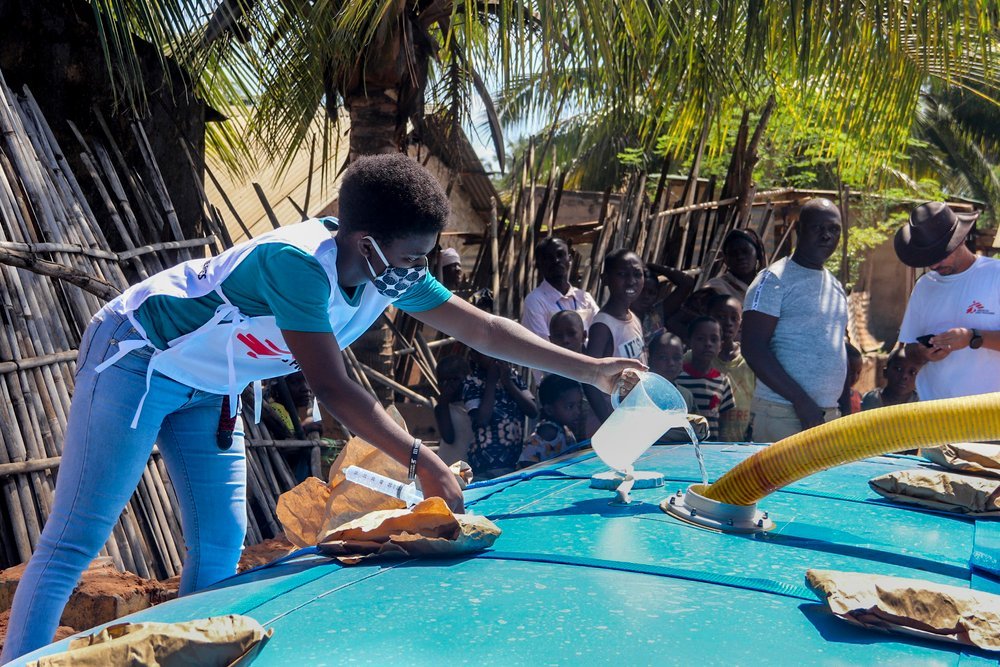 To assist the national response to COVID-19, we gave logistical and technical support to the main COVID-19 referral hospitals in Maputo, and helped the health authorities to install four isolation centres, two in Pemba and two in Beira.

In Beira, we also supported the follow-up of HIV patients with COVID-19.

In addition to supporting the emergency response to these natural disasters, Médecins Sans Frontières (MSF) continued to run regular projects providing care for HIV and tuberculosis (TB), a dual epidemic affecting a large proportion of the population: an estimated 2.2 million Mozambicans are living with HIV, and 34,000 of them are co-infected with tuberculosis (TB).

On 15 March, Cyclone Idai hit Beira in Sofala province, affecting some 1.85 million people. Homes, health facilities and other infrastructure were destroyed by the cyclone and subsequent flooding and more than 400,000 people were displaced. We deployed emergency teams to support the response and, 10 days later, a cholera outbreak was declared.

As well as managing 57 per cent of cholera patients,1 we supported the Ministry of Health to vaccinate 900,000 people against the disease, set up two water treatment plants, rehabilitated 18 health centres and distributed relief items, such as soap, mosquito nets, cooking utensils, blankets, mats and buckets. In total, we conducted nearly 11,900 outpatient consultations, primarily for malnutrition and malaria, in 25 locations. 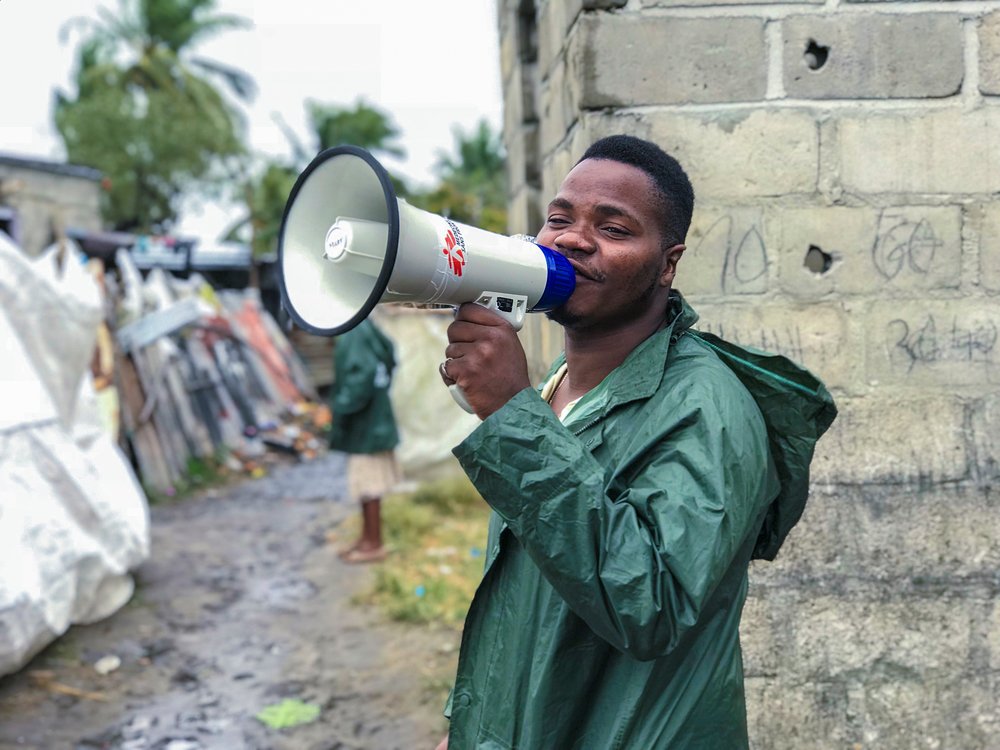 Six weeks later, when Cyclone Kenneth made landfall in Cabo Delgado province, we built cholera treatment centres in Pemba, Mecufi and Metuge, carried out water and sanitation activities and conducted general health consultations. The catastrophic impact of two cyclones in such a short space of time was compounded by months of drought later in the year. Together they exacerbated the already serious food insecurity and malnutrition situation in the country.

In the capital, Maputo, we are implementing specialised care and support packages for patients with advanced HIV who are facing the challenge of staying on lifelong treatment or have developed drug resistance. This includes improving the detection and rapid treatment of opportunistic infections.

In Mafalala slum, we work with a local organisation to run a drop-in centre for people who use drugs, where testing and treatment for HIV, TB and hepatitis C are available. It is the only programme in Mozambique offering comprehensive harm reduction services, including needle and syringe distribution. 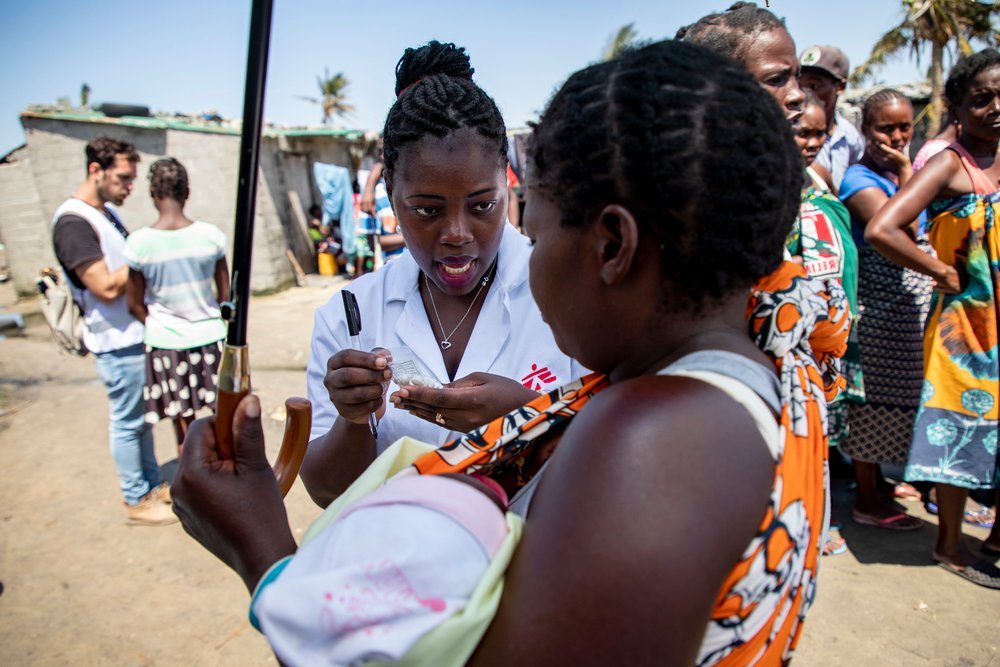 Pablo Garrigos/MSF
Nurse Celina Feliz Berto gives medication to a woman with her child at one of MSF’s mobile clinics in Beira, an area hard hit by Cyclone Idai. Mozambique, March 2019.

In Beira, MSF runs mobile clinics providing sexual and reproductive healthcare, including HIV testing, counselling and family planning to vulnerable groups such as sex workers, who are at high risk of HIV infection. In 2019, we started offering advanced HIV care at Beira central hospital.

In Cabo Delgado, access to healthcare is extremely limited due to violence and insecurity. In 2019, we started supporting a health centre in Macomia, with treatment for malaria, malnutrition and respiratory diseases.

We also rehabilitated the centre, which was severely damaged by Cyclone Kenneth, ran training on maternal health, paediatrics and sexual and reproductive healthcare for Ministry of Health staff and upgraded the water supply system.