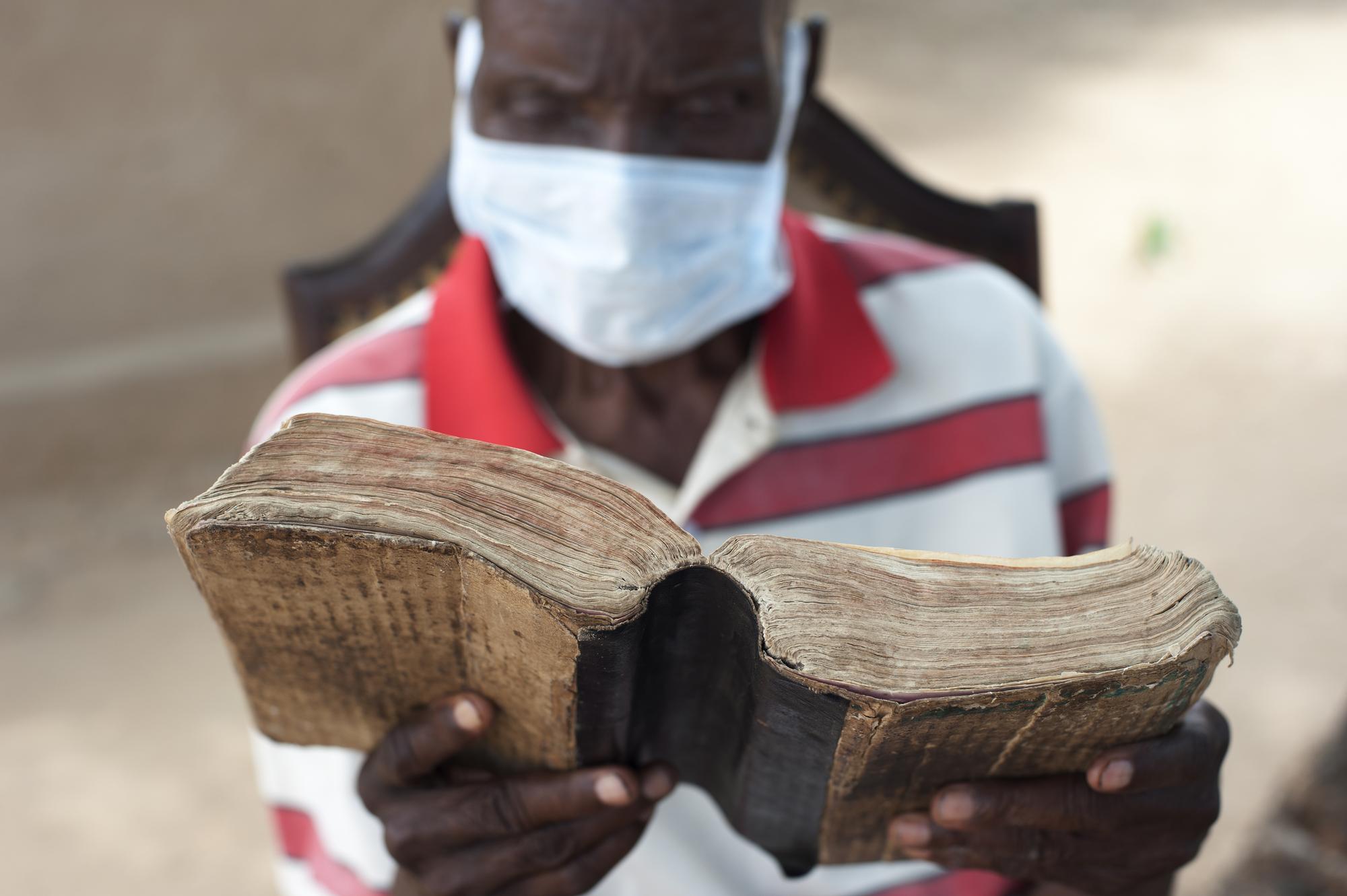 Interested in finding out more about MSF? The following list of books has all the information you could need, from personal accounts and academic analysis by our staff to educational guides and photographic displays.

In the middle of the night in 1997, MSF administrator Christophe Andre was kidnapped by armed men and taken away to an unknown destination in the Caucasus region. For three months, Andre was kept handcuffed in solitary confinement, with little to survive on and almost no contact with the outside world.

Close to 20 years later, award-winning cartoonist Guy Delisle (Pyongyang, Jerusalem, Shenzhen, Burma Chronicles) recounts Andre's harrowing experience in Hostage, a book that attests to the power of one man's determination in the face of a hopeless situation.

The 2014-2015 Ebola epidemic in West Africa was an unprecedented medical and political emergency that cast an unflattering light on multiple corners of government and international response.

Fear, not rational planning, appeared to drive many decisions made at population and leadership levels, which in turn brought about a response that was as uneven as it was unprecedented: entire populations were decimated or destroyed, vaccine trials were fast-tracked, health staff died, untested medications were used (or not used) in controversial ways, humanitarian workers returned home to enforced isolation, and military was employed to sometimes disturbing ends. ​

Comprising eleven topic-based chapters and four eyewitness vignettes from both MSF- and non-MSF-affiliated contributors (all of whom have been given access to MSF Ebola archives from Guinea, Sierra Leone, and Liberia for research), it aims to provide a politically agnostic account of the defining health event of the 21st century so far, one that will hopefully inform current opinions and future responses.

Written with great warmth and empathy, Band-Aid for a Broken Leg is a compassionate, deeply honest and often humorous account of life on the medical frontline in Angola, Mozambique and South Sudan.

It is also a moving testimony to the work done by medical humanitarian groups and the remarkable, often eccentric people who work for them.Damien Brown thinks he's ready when he arrives for his first posting with MSF in Africa.

But the town he's sent to is an isolated outpost of mud huts, surrounded by landmines; the hospital, for which he's to be the only doctor, is filled with malnourished children and conditions he's never seen; and the health workers - Angolan war veterans twice his age who speak no English - walk out on him following an altercation on his first shift.

"Jerusalem is Delisle's biggest and most accomplished work to date. Without Delisle we might never learn what it's actually like to live in a place like this, or get a realistic idea of the people we would meet if we did.

He's clear-eyed, good-hearted, he takes what he sees and he turns it into art." (Rev’d Hayley Campbell New Statesman )Jerusalem is a travelogue and memoir in which Delisle recounts his time spent in the city and other parts of Israel and the occupied West Bank with his two young children and his long-term partner, Nadège, an MSF logistician.

The purpose of this book is to challenge this assumption through the analysis of the events that have marked MSF s history since 2003 (when MSF published its first general work on humanitarian action and its relationships with governments).

It addresses the evolution of humanitarian goals, the resistance to these goals and the political arrangements that overcame this resistance (or that failed to do so).From international NGOs to UN agencies, from donors to observers of humanitarianism, opinion is unanimous: in a context of the alleged 'clash of civilizations', our 'humanitarian space' is shrinking.

Put in another way, the freedom of action and of speech of humanitarians is being eroded due to the radicalisation of conflicts and to the reaffirmation of state sovereignty over aid actors and policies.

Delisle's graphic novel describes a year spent in Burma with his wife, an MSF logistician. Although the main focus of the book is his own personal memoirs, it's a fascinating book which often speaks about MSF's current and past work in Burma and gives descriptions of the daily lives of MSF staff in the country. It's funny and easy to read, without trivialising or simplifying the details of the situation.

Award-winning photographer Tom Craig was commissioned by MSF to document the writers in these places in trouble. His striking photographs amplify the sense of compassion required while also demonstrating that beautiful humanity is the victim of tragedy.

An important book for anyone interested in global issues, Writing on the Edge features twelve essays that take the reader to countries in crisis.

This book is a collection of interviews with MSF's doctors, nurses and non-medical staff, as well as a number of accompanying photographs.

Bortolotti visited MSF volunteers from Angola to Afghanistan and the book builds to give a very detailed picture of MSF's current and recent work all over the world, and what it is like to volunteer for them.

This personal account was adapted from Maskalyk's blog, which he kept during his time as an emergency doctor in Abyei, Sudan.

the book has the immediacy and feel of a journal, with transcriptions of conversations and Maskalyk's detailed and frank observations of his work on a daily basis. The book is an immediate and vivid description of life in Sudan but also a rallying call to humanitarian action.

The last part of the book focuses on the need to widen access to aids drugs in the developing world and highlights MSF's position as a politically independent campaigning force as well as a humanitarian organisation.

Written by the one time president of MSF's international council, An Imperfect Offering is a brilliant introduction to the organisation and its work. Not only does it tell Orbinski's own story of his humanitarian awakening and work as an MSF doctor, it also gives a comprehensive picture of MSF's history, its major campaigns and the kinds of problems it comes up against.

The book balances the general and the personal in a manner that is informed and interesting. Orbinski describes his own work in areas of conflict, in refugee camps, and helping in the aftermath of natural disasters, showing the broad and far reaching nature what MSF does.

He mixes anecdotes about individuals he has known with more general discussions of the difficulties faced by MSF as an organisation. Orbinski's account is both an inspiring and a compelling read.

Lisa French Blaker worked as a nurse for MSF in Darfur, between September 2005 and Summer 2006.

The first hand account talks about her work that could be difficult, frustrating and often feel impossible. Blaker manages to write with humour and hope about her experiences and the book is warm and humane.

She also describes her work as a delivery nurse, meaning the book gives a good insight into issues surrounding women's rights and women's health issues affected by war and by religious control.

The tough-talking tone of Marc Vachon's book is unusual for a book about humanitarianism, but Vachon has led an unconventional life.

After a difficult upbringing in foster care homes around Montreal he became involved in biker gangs, dealing and taking cocaine. He managed to get away from his life and start again, working in construction and eventually becoming a frontline logistician for MSF.

This book really is an individual account - Vachon is hot headed and has had a turbulent relationship with MSF. He often talks of getting things wrong while working in places affected by confict.

By describing his mistakes so frankly he shows how difficult the job facing aid staff can be and the toll his work has taken on him, particularly how the situation in Rwanda and DRC affected him and his faith in humanitarianism.

Timely and controversial, A Bed for the Night reveals how humanitarian organizations trying to bring relief in an ever more violent and dangerous world are often betrayed and misused, and have increasingly lost sight of their purpose.

Drawing on first-hand reporting from hot war zones around the world - Bosnia, Rwanda, Congo, Kosovo, Sudan and, most recently, Afghanistan - David Rieff shows us what humanitarian aid workers do in the field and the growing gap between their noble ambitions and their actual capabilities for alleviating suffering.

Tracing the origins of major humanitarian organizations such as the International Committee of the Red Cross, Médecins Sans Frontières, and CARE, he describes how many of them have moved from their founding principle of neutrality, which gave them access to victims, to encouraging the international community to take action to stop civil wars and ethnic cleansing.

In 1986, Afghanistan was torn apart by a war with the Soviet Union. This graphic novel/photo-journal is a record of one reporter's arduous and dangerous journey through Afghanistan, accompanying MSF.

Didier Lefevre's photography, paired with the art of Emmanuel Guibert, tells the powerful story of a mission undertaken by men and women dedicated to mending the wounds of war.

Towell brings us black and white images of people shunned by society and desperate through poverty, their situation exacerbated through the HIV/AIDS epidemic.

This book is a celebration of MSF's work and the people we have helped.

Elliot Leyton and Greg Locke travelled to Rwanda in the autumn of 1996. There they found themselves plunged into a humanitarian crisis of epic proportions. Hundreds of thousands of people were on the move.

Armed militias and hostile armies lurked in the background. Mass starvation, plague, and an eruption into civil or criminal violence were immediate possibilities.

The two Canadians, one an internationally recognized expert on the psychology of killing, the other an experienced photo-journalist, had a rare opportunity to observe MSF in action at a time when the stress was enormous and its resources were stretched to the limit.

"Our volunteers don't have to sit by helplessly, wondering what on earth we can do. The gift of action is ours."

David Morley uses his journals to describe his seven years working for the Canadian section of MSF, as well as giving clear detailed descriptions of MSF's work and its history.

Young people living in dire situations tell their heart-warming stories in their own words. This is combined with facts, timelines, statistics and reports by governments and aid agencies.

This book forms part of the citizenship and geography curriculum for KS3 students.