In 2020, Médecins Sans Frontières (MSF) continued to run projects across Myanmar, addressing gaps in healthcare in hard-to-reach communities and responding to the needs of people affected by inter-ethnic tensions.

Myanmar, also known as Burma, has high HIV and Tuberculosis rates, and MSF is the largest provider of HIV/AIDS care in Myanmar. MSF has been working in Myanmar since 1992. 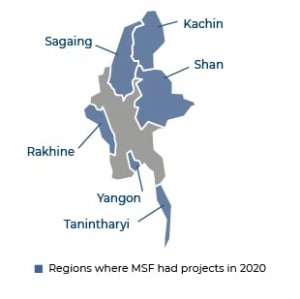 During the year, we gained significant access in Rakhine and Shan states, which allowed us to reach people most affected by conflict.

Despite the COVID-19 pandemic, we were able to send mobile teams to several locations across Rakhine, including Mrauk-U in the north, to provide general healthcare and mental health support for internally displaced people.

We also offered medical and logistical support to public hospitals, assisted the Ministry of Health and Sports with the management of quarantine sites and provided personal protective equipment to its staff.

In June, we finalised the transfer of HIV-positive patients in Yangon to the national AIDS programme. Although some patients’ access to antiretroviral (ARV) drugs was interrupted due to restrictions on movements during the pandemic, our team in Shan state made home visits to deliver medication where possible. We closed our HIV clinic in Bhamo, Kachin state, at the end of December.

In Dawei, Tanintharyi region, we continued to treat patients with HIV, including those co-infected with tuberculosis and hepatitis C, focusing on key groups such as migrant workers, fishermen and sex workers. We adapted our projects to ensure continuity of care for patients in remote locations unable to reach our clinic, due to COVID-19 movement restrictions.

In July, we handed over these activities to Medical Action Myanmar, a well-established organisation with whom we had been working informally for the past two years. We continued to support the health authorities in Dawei to respond to the seasonal dengue outbreak. 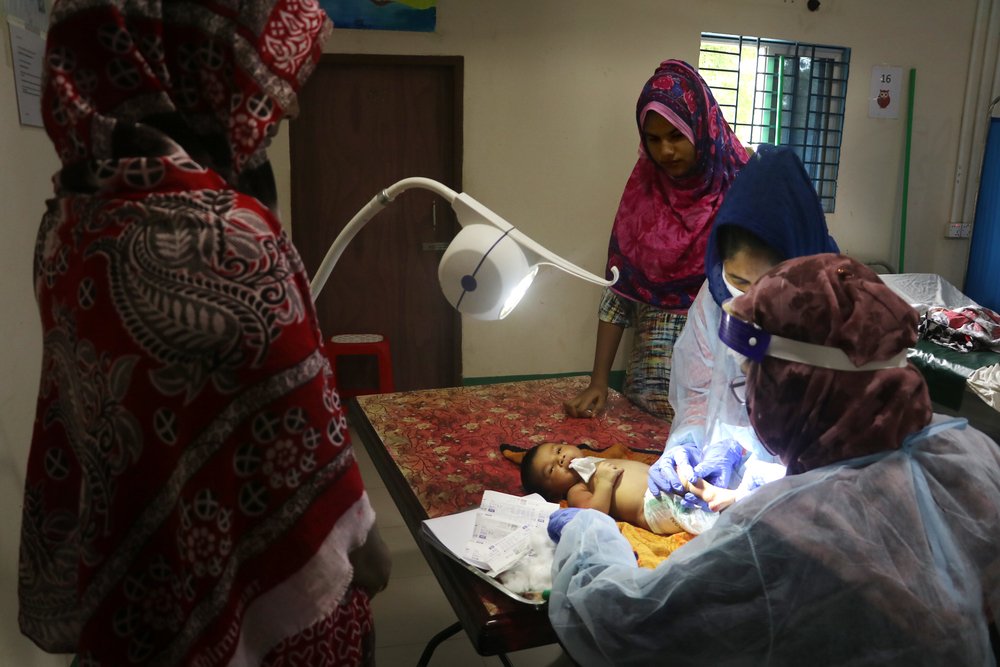 In 2019, we ran projects across the country, addressing gaps in healthcare in hardto-reach communities and responding to the immense needs of people affected by interethnic tensions and displacement.

More than 50,000 people were displaced in 2019 and several civilians died, including children, as a result of the continuous fighting between the Myanmar army and the ethnic Rakhine-backed Arakan army in Rakhine state. After several months of deadlock due to the authorities’ refusal to grant access to international humanitarian organisations, MSF was able to resume activities to assist the displaced, first in Buthidaung, in June, and then in Maungdaw in November.

As well as running mobile clinics and conducting health education and psychosocial support sessions, our teams distributed relief items, such as mosquito nets, blankets and soap, and constructed shelters and sanitation systems.

We continued to work in displacement camps in Pauktaw township, central Rakhine, where thousands of Rohingya and other ethnic minorities such as Kaman, remain confined as a result of previous outbreaks of violence. We deployed seven mobile clinics offering general healthcare and emergency referrals around these settlements and in nearby villages, as well as in Aung Mingalar, a closed Muslim ghetto in Sittwe, where we also run a mental health programme. 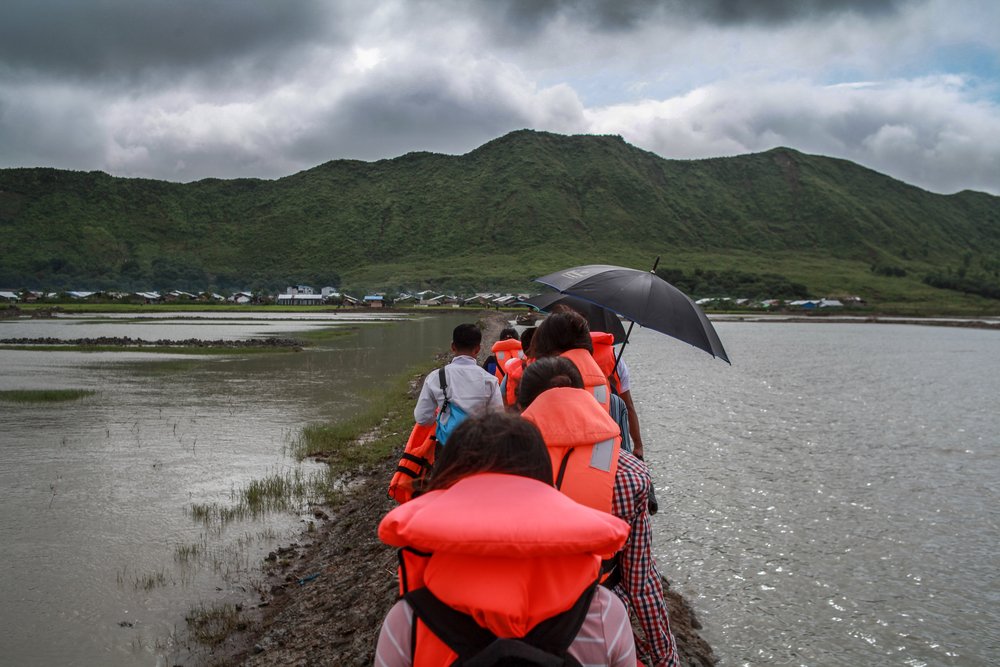 MSF also opened two new project sub-sites in Kachin and Shan, neighbouring states in the north where there are large numbers of migrants, displaced people and groups vulnerable to HIV infection, such as drug users and sex workers. Our services include general healthcare and treatment for sexual and gender-based violence, HIV, hepatitis C and tuberculosis (TB).

We are working closely with the Ministry of Health to transfer our HIV patients – including those co-infected with hepatitis C, TB and multidrug-resistant TB (MDR-TB) – to the decentralised national AIDS programme so they can receive care closer to home. A total of 8,012 patients from our projects in Kachin, Shan, and Yangon were transferred. In June, we closed Insein clinic in Yangon after a successful transition.

In Dawei, a port city in Tanintharyi, where many fishermen and migrants live, MSF offers comprehensive HIV care, treatment and prevention for people at risk.

In 2019, we also started working in partnership with Médecins du Monde to treat HIV patients co-infected with hepatitis C in Kachin. Our team offers technical support, follow-up and data management. 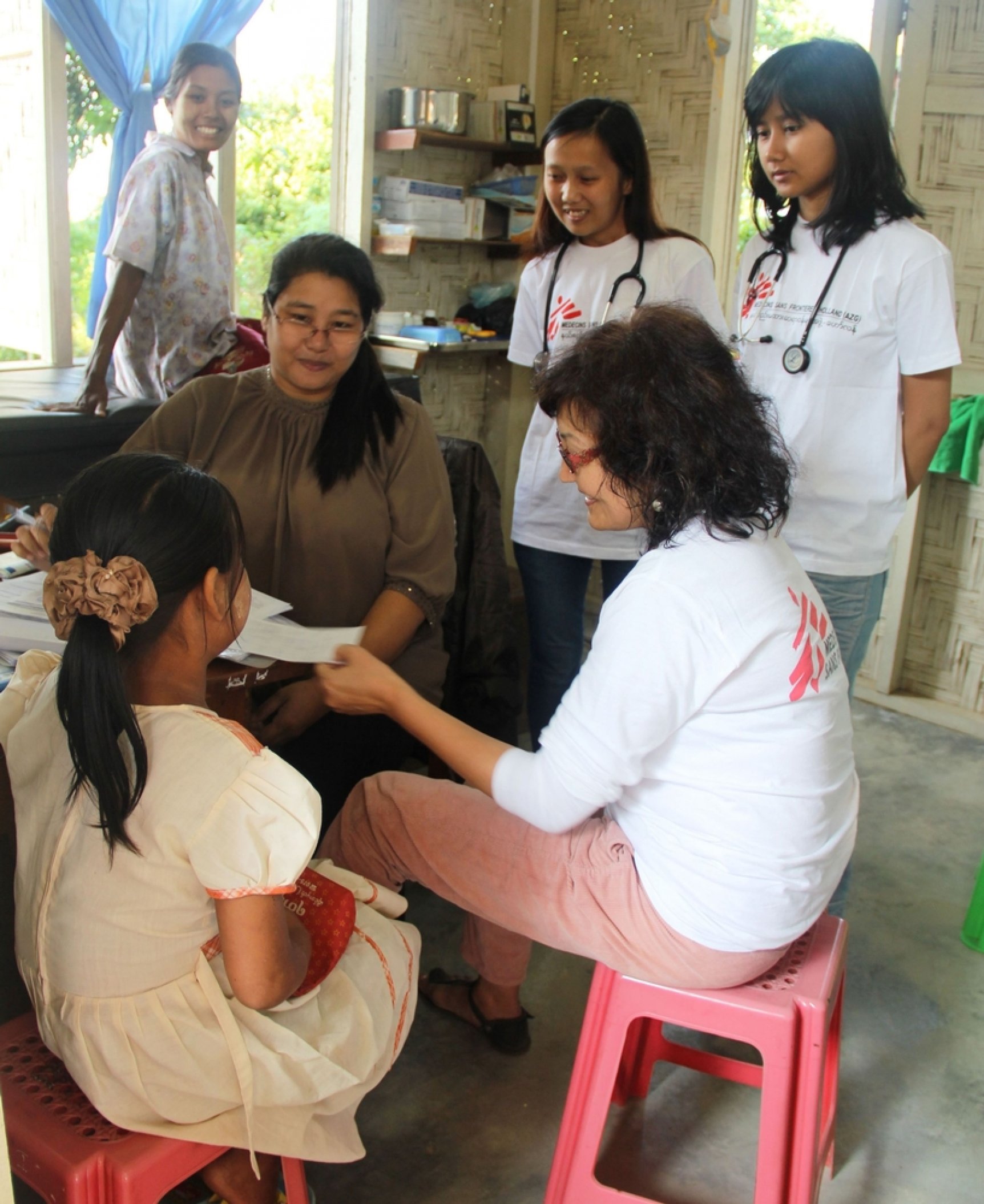 Eddy McCall/MSF
MSF staff providing treatment to a girl with HIV in a clinic in Myitkyina, Kachin state.

Our mobile teams provide general healthcare to rural communities in Naga (Sagaing), a remote, impoverished region with few health facilities. The teams conducted 3,250 consultations in 2019, travelling by motorcycle across steep terrain to reach the 15 communities we have targeted. We are working there to strengthen the role of community health workers, promote health education and support the Ministry of Health with simpler, more accurate diagnosis of TB and MDR-TB.