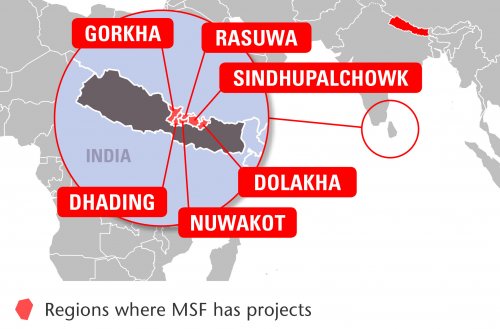 After the first 7.8 magnitude earthquake struck, Médecins Sans Frontières/Doctors Without Borders (MSF) teams quickly arrived in the country and focused on reaching the people living in remote mountainous areas.

The earthquake’s epicentre was in Gorkha district, 80 kilometres west of Kathmandu.

Teams provided healthcare to people affected by the conflict between government forces and the Communist Party of Nepal which lasted from 1996 until 2006, and by the resurgence of violence that accompanied a chaotic peace process.

We worked where help was most needed, including in basic healthcare, reproductive healthcare and water and sanitation provision.

Their focus, in accordance with the needs expressed by the communities, was children under five, pregnant women and mental healthcare. 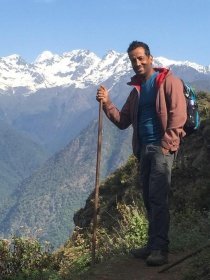 In fear for his life >

In Arughat, Gorkha district, MSF set up a 20-bed inflatable hospital with an operating theatre, and emergency, maternity and resuscitation rooms. This replaced the local healthcare centre that had been destroyed by the earthquake until the Ministry of Health was able to open a semi-permanent structure at the end of June.

MSF also set up a temporary tented clinic in Chhapchet, Dhading district, an area that was severely affected. Staff provided basic healthcare and carried out minor surgical interventions, for example on patients whose wounds had become infected.

MSF teams were already operational by the time the second earthquake struck on 12 May, and were able to start providing healthcare in the hours that followed.

With many remote villages completely flattened, and the monsoon season fast approaching, shelter distribution and sanitation work were the priorities.

MSF transported around 6,000 family-sized tents – as well as almost 13,000 iron sheets and 3,000 reconstruction kits for the building of more permanent dwellings – into the mountains by both land and air.

By the time the monsoon arrived, almost 10,000 households in Dhading, Nuwakot, Dolakha, Gorkha, and elsewhere in the Budhy Gandaki valley had some form of shelter.

Following this immediate emergency phase, MSF reduced its activities in July 2015, but continued working through two projects in Sangha and Charikot. In Sangha, MSF worked in the Spinal Injury Rehabilitation Center a 50-bed facility situated east of Kathmandu.

Another MSF team worked with Ministry of Health staff at the primary healthcare centre in Charikot, a village in Dolakha district (the epicentre of the second earthquake), in the emergency room, inpatient department and operating theatre, and supporting the laboratory and X-ray services. All these activities had been handed over to a public–private partnership by the end of 2015. 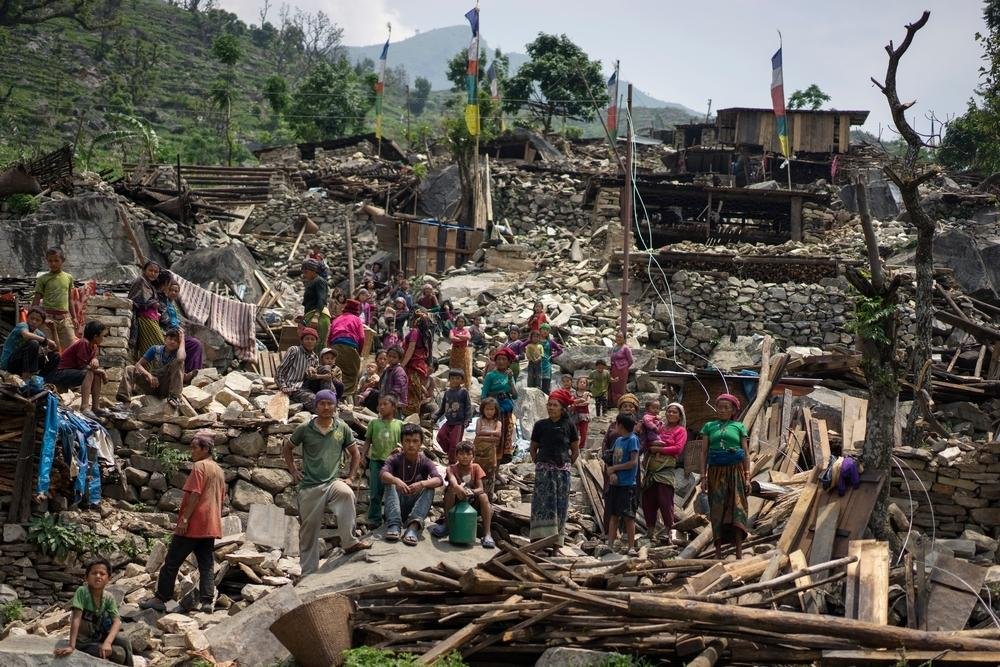 Brian Sokol/Panos
Nepalese sit on stone steps in their destroyed village in the Tsum valley of Gorkha District, Nepal on May 7 2015. On 25 April a magnitude 7.8 earthquake killed more than 8,000 people and destroyed massive amounts of property, including numerous temples that were on the list of UNESCO World Heritage Sites.

During a clinic on 2 June, three of our colleagues and their pilot lost their lives in a helicopter crash. Sandeep Mahat, Jessica Wilford and Sher Bahadur Karki (Raj), and their pilot Subek Shrestha, were flying back to Kathmandu after delivering assistance to villages in Sindhupalchowk district when the accident occurred. It is with great sadness that we bid them farewell.