The first few months of the year are usually the least busy for Médecins Sans Frontières (MSF) teams in Niger. But everything changed in March 2020 with the spread of COVID-19.

Niger is a vast, arid state on the edge of the Sahara. 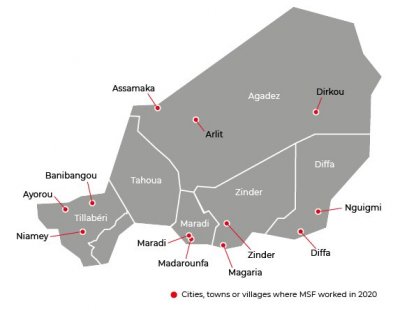 The country endured austere military rule for much of its post-independence history and is rated by the UN as one of the world's least-developed nations.

The drought-prone country – with a population of just over 18 million – sometimes struggles to feed its people. Its main export, uranium, is prone to price fluctuations and agriculture is threatened by the encroaching desert.

As such, Niger is affected by child malnutrition rates of epidemic proportions – peaking during the ‘hunger gap’, a period between harvests in May and September when household food stocks become depleted and are insufficient to meet nutritional needs.

The hunger gap coincides with the rainy season and a proliferation of malaria-transmitting mosquitoes, a lethal combination for young children: a malnourished child is more vulnerable to diseases such as malaria and a sick child is more likely to become malnourished.

In the capital, Niamey, the city with the most cases, MSF built a treatment centre to care for patients in the first months of the pandemic. We also supported the COVID-19 call centre in Niamey and some health facilities in other major cities. 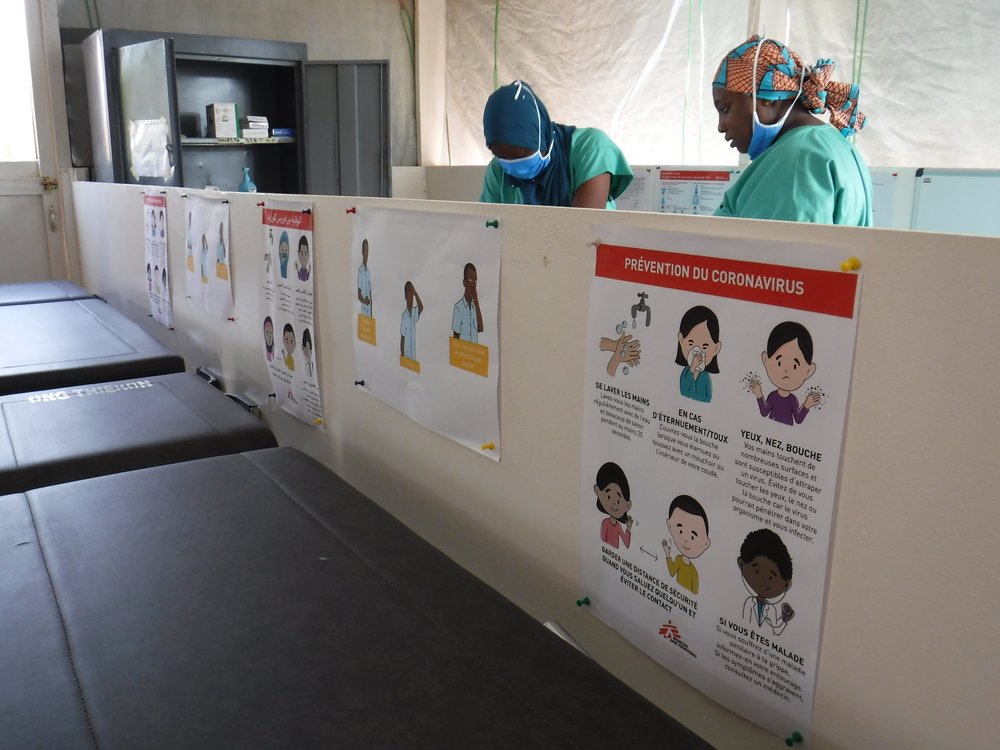 Nathalie San Gil/MSF
More than 170 people were recruited to work in the MSF COVID-19 treatment center at the the Amirou Boubacar Diallo National Hospital in Niamey.

From June, heavy rains fell, submerging the most impoverished districts of the capital and several parts of Maradi, Tahoua, and Tillabéri. In Niamey, we supplied drinking water and set up mobile clinics to assist people displaced by the floods. In addition, we distributed relief items and provided psychological support in the hardest-hit areas of the city.

In Diffa, Maradi, Magaria, and Tillabéri, our teams treated more patients with malaria than in 2019, mainly due to the shortage of antimalarial medicines and a lack of access to healthcare, both due to the COVID-19 crisis. The early onset of the rainy season also resulted in increased transmission of the disease.

From October to December, we supported a regional hospital in Niamey to improve care for children under the age of 15 by increasing its inpatient capacity, training staff and donating drugs. We also maintained our support to the Ministry of Public Health by boosting inpatient capacity for the treatment of acutely malnourished children in Madarounfa and Magaria.

Our teams are developing preventive and community-based approaches to reduce the number of patients with complications from malnutrition; for example, by providing early treatment for malaria, acute respiratory infections and diarrhoea. 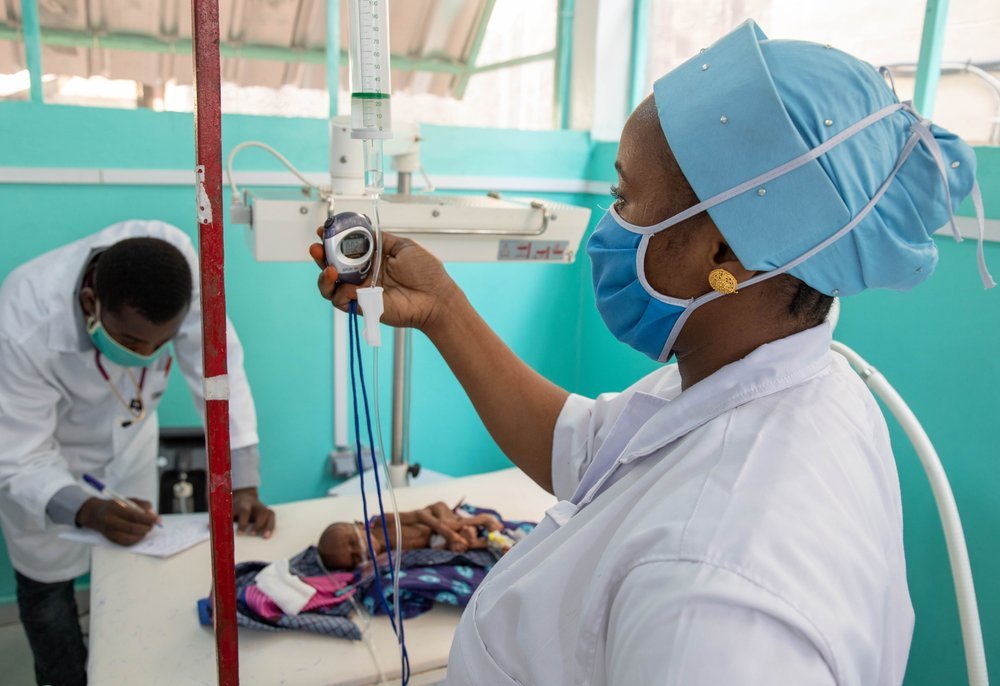 MSF/Mack Alix Mushitsi
In the emergency room of Magaria's paediatric unit, a nurse takes care of a child suffering from malaria.

Despite the closure of the border during the pandemic, the systematic and illegal expulsion of migrants from Algeria to Niger continued in 2020. MSF teams in Agadez donated essential healthcare supplies, gave psychosocial support, and ran search and rescue operations for migrants lost or abandoned in the desert.

Throughout the year, our teams assisted host communities and displaced people affected by violence in Tillabéri and Diffa regions by offering healthcare and distributing relief items. We also asked the relevant authorities to ensure the protection of civilians and improve assistance to them.

Responding to disease outbreaks and other emergencies

We continued to support the health authorities with vaccinations, epidemiological surveillance and emergency interventions to tackle disease outbreaks and other emergencies, including floods and mass displacements across Niger.

In 2019, EMUSA and other regular projects also supported the Ministry of Health to run measles vaccination campaigns in four health districts, one in Niamey and three in Maradi region, which reached more than 354,200 children. In addition, EMUSA vaccinated 41,800 children in Madaoua and 5,060 in Dirkou against the disease.

In 2019, there were numerous attacks and incursions in Diffa, the southeastern region bordering Nigeria. These often involved killings and kidnappings, and caused thousands of people to flee their homes, particularly in Diffa and Nguigmi departments.

In response to the increased needs in Diffa, we ran mobile clinics and expanded our nutrition activities at Nguigmi hospital and two specialised health centres. We also provided technical assistance to outpatient feeding centres treating severely malnourished children. Another focus of our work was the district hospital, where we supported the opening of an operating theatre. 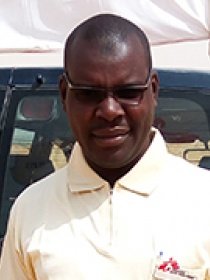 No end to the music >

On 26 April 2019, unidentified armed men attacked our office in Mainé-Soroa in Diffa.

One staff member was slightly injured, four vehicles were set on fire and the premises were damaged. As we could not ensure the safety of our staff and patients, we decided to cease activities in June.

The project, opened in July 2017, offered medical care to people both in Diffa and across the border in Nigeria. 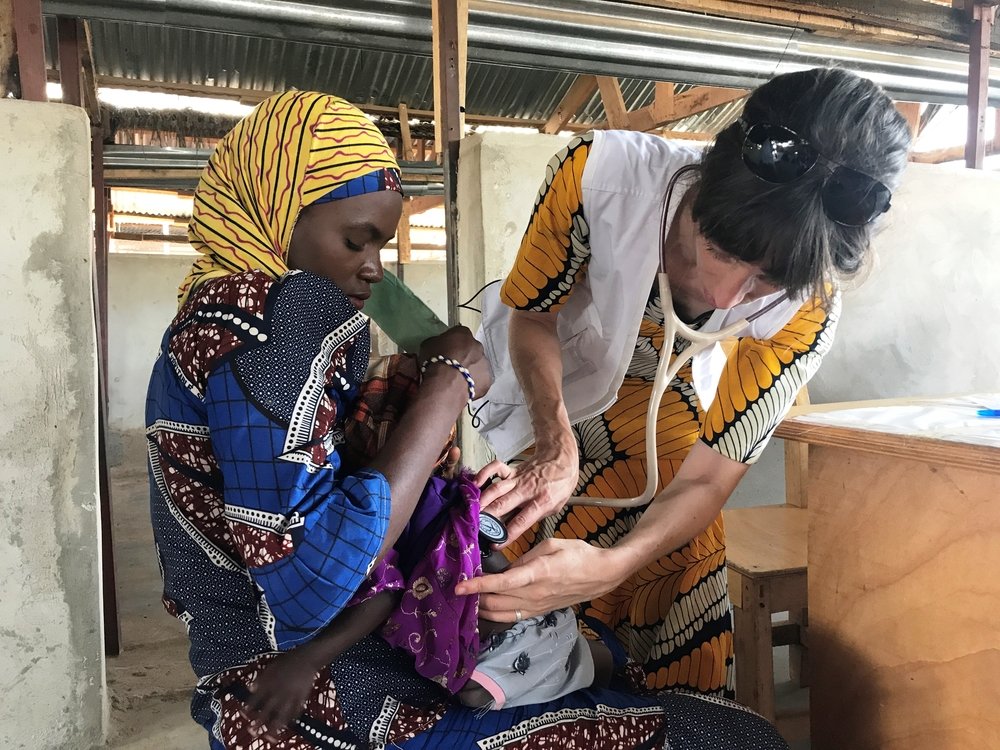 In Tillabéri region, which shares borders with Mali and Burkina Faso, we worked to increase the availability of free healthcare for vulnerable and displaced people, refugees and local communities affected by the conflict by deploying mobile clinics to remote and inaccessible areas, administering vaccinations and screening for malnutrition.

During the year, our teams in Ayorou rural commune carried out 12,400 consultations through health centres in Koutougou and Ayorou and mobile clinics deployed to displacement camps in Kongokiré and Igagalan.

Following the almost daily attacks perpetrated by armed groups, the government declared a state of emergency covering Tillabéri and Diffa regions, and obliged humanitarian workers to use armed escorts. This had a serious impact on our activities and further reduced people’s access to healthcare and other public services.

Niger is a major transit country for migrants, asylum seekers and refugees expelled from Algeria, returned from Libya or travelling north to Europe. These people are often victims of abuse and social exclusion.

In 2019, in Agadez region, we scaled up our activities to assist migrants who had been turned back at the border village of Assamaka and internal migrants working in the mining sites at Tabelot in Dirkou, as well as vulnerable host communities. 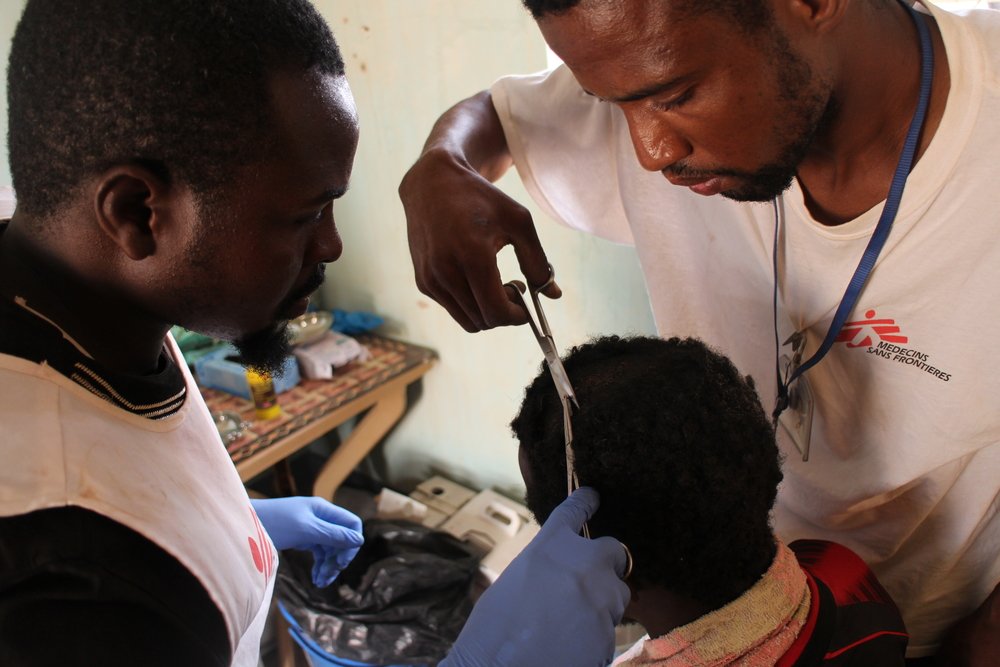 Each year between July and October, food shortages and heavy rains trigger a spike in malnutrition and malaria in Niger, especially in the southern regions.

Although remarkable progress has been made in the prevention and treatment of childhood diseases in Niger over the past decade, hundreds of thousands of children fall victim to this chronic emergency each year. Recently, violence and growing insecurity in Niger and neighbouring countries have put an additional strain on the health system.

In 2019, MSF collaborated with the Ministry of Public Health to treat 191,400 children for malaria and 43,400 cases of malnutrition in Madaoua, Madarounfa and Magaria. Most of the children who required inpatient care were admitted in July and August, the start of the seasonal peak. Every year, to cope with the influx of patients, many of whom are in a critical condition, we increase our hospital capacity.

In 2019, we admitted more than 15,300 children under the age of five – an average of 42 a day – to Magaria district hospital’s paediatric unit, and during the peak, we admitted 46 children to intensive care each day. We also provided care for over 17,000 children admitted to Madarounfa hospital’s paediatric wards and intensive feeding centre. To reduce the number of patients with complications, we continue to focus on developing preventive and decentralised approaches.

In Madarounfa, we have extended our activities from reinforcement during the peak period to year-round support to facilitate timely access to healthcare for children under the age of five. Community health workers worked throughout the year to test and treat simple cases of malaria, carry out nutritional screening and manage simple diarrhoea in children in their villages.

This strategy of decentralisation was mainly implemented to reduce the number of admissions to health facilities and prevent children from dying at home in their villages because no medical care is available. If sick children receive early care in their communities, their symptoms can be prevented from worsening and they are cured faster.

We also strengthened our community approach in Magaria, for example by providing early treatment for malaria, acute respiratory infections and diarrhoea. Our teams opened 30 malaria treatment sites during the peak period.