In 2019, further intensification of violence and insecurity increased humanitarian needs in Nigeria. More than a million people are estimated to be entirely cut off from aid. 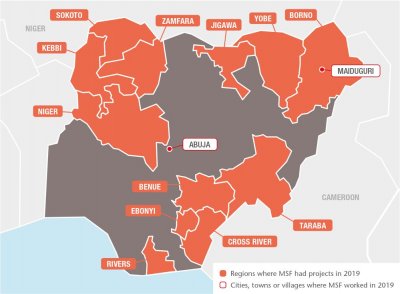 Nigeria also has one of the fastest growing economies in the world. Petroleum and oil resources play a large role in the Nigerian economy. However, the security situation deteriorated in many areas of Nigeria in 2014. Violence and displacement took their toll on people’s health and reduced their access to medical services.

Médecins Sans Frontières (MSF) first worked in Nigeria in 1971. Our response to the Biafra conflict and ensuing famine was, in fact, the first official MSF mission after our founding.

According to the United Nations, more than 1.7 million people are internally displaced in the northeast of Nigeria. Of these, some 80 per cent are in Borno state. Thousands have been killed in the fighting and many more by the deadly combination of malnutrition, measles and malaria.

In 2017, MSF responded to Nigeria’s largest meningitis C outbreak in 10 years and continued to expand its programmes focusing on women and children. It is estimated that 58,000 women die from complications during pregnancy and childbirth every year and one in eight children dies before the age of five.

MSF has scaled up its assistance in Borno over the past two years, but access to areas held by armed opposition groups, or contested by the two sides, has been restricted, and little is known about the needs of people in these locations.
MSF teams in Borno and Yobe run paediatric nutrition programmes, vaccination campaigns, general consultations and services to support emergency rooms, maternity and paediatric wards and other inpatient departments. Staff also manage mental health activities, monitor food, water and shelter needs, and respond to disease outbreaks. 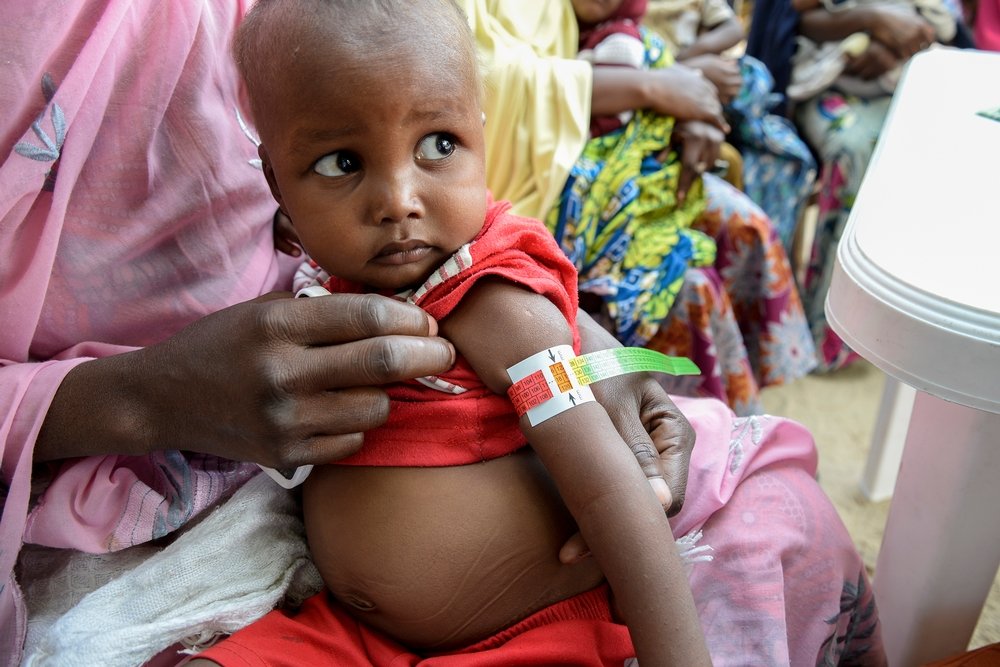 Although the nutrition situation has generally stabilised in Maiduguri, capital of Borno state, due to a massive deployment of aid, vulnerable pockets still remain. In some enclaves controlled by the military, people are unable to farm or fish due to restrictions on their movements, making them heavily dependent on humanitarian assistance. MSF teams distributed food and provided nutritional screening and care for over 35,700 malnourished children through the inpatient and outpatient therapeutic feeding centres in Borno and Yobe. A total of 11,842 children under five were admitted for care MSF facilities across the two states.

Primary and secondary healthcare for displaced people was available through fixed facilities in Maiduguri, Damboa, Benisheik, Gwoza, Monguno, Ngala, Pulka, Rann, Damaturu, Kukerita and Jakusko. Teams also deployed mobile clinics to the hard-to-reach towns of Bama, Banki, Damasak and Dikwa to improve water and sanitation as well as conduct medical consultations. Activities in Benisheik and Jakusko were handed over to other organisations at the end of 2017. In Jakusko, MSF had treated more than 20,200 children under 15 for malaria.

MSF also handed over its mother and child healthcare programme in Maimusari and Bolori, in Maiduguri, to the Ministry of Health and closed Gwange intensive therapeutic feeding centre, but maintained the focus on child healthcare by opening a paediatric hospital with an intensive care unit at the same site.

In 2017, in the northeast of Nigeria, MSF conducted over 400,000 outpatient consultations. Over 9,000 deliveries were assisted by MSF teams, almost double the total number of assisted deliveries of the previous year. Teams also vaccinated children against measles, pneumococcal pneumonia and other preventable diseases.

At least 120 people were wounded and 52 killed following a bombing in an internally displaced people's camp in Rann, Nigeria, on 17 January 2017. The bombing was carried out by the Nigerian Army.

In northeast Nigeria, more than a decade of conflict between the Nigerian government and armed opposition groups has taken a severe toll. The UN estimates that over two million people are now displaced, and around seven million depend on aid for survival. In 2019, as the situation further deteriorated, a number of aid workers were abducted and killed by armed opposition groups. In addition, new counter-terrorism laws increased restrictions on humanitarian action.

Only people living in government-controlled areas in and around the state capital, Maiduguri, were able to receive humanitarian assistance. In 2019, in the areas we could access, we managed hospital emergency rooms, operating theatres, maternity units and children’s wards. Services included nutritional care, vaccinations, treatment for malaria, tuberculosis and HIV, as well as for victims of sexual violence, and mental health support. We also ran water and sanitation activities. Over the year, we admitted 34,900 patients for care and treated 106,300 on an outpatient basis.

In Maiduguri, we run a therapeutic feeding centre and a paediatric hospital with an intensive care unit. At these facilities, more than 7,600 children were treated for severe malnutrition, around 7,700 for malaria and nearly 6,970 for measles during an outbreak that was exacerbated by the ongoing conflict.

In Gwoza and Pulka, garrison towns controlled by the Nigerian military, our teams provided emergency care to nearly 18,600 patients in public hospitals. In Pulka, we treated 74,400 outpatients, most commonly for acute diarrhoea related to a lack of clean water.

In Rann, we conducted 9,200 outpatient consultations. In addition, we implemented seasonal malaria prophylaxis in Banki and Bama.

In Zamfara, tens of thousands of people fleeing violence in the north of the state sought shelter in and around the town of Anka. In this town, our teams conducted nearly 31,800 medical consultations and distributed cooking utensils and personal hygiene products to more than 1,000 families.

We observed a high prevalence of malnutrition in children under the age of five, and our teams registered admissions of nearly 12,000 inpatients and outpatients at our intensive therapeutic feeding centre in the state capital, Gusau, and hospitals in Anka, Zurmi, Shinkafi, Talata Mafara and Bukkuyum. In addition, in Anka hospital and in clinics in 11 locations in Zamfara state, we treated nearly 27,300 patients for malaria and around 920 for measles.

In Benue state, an estimated 16,000 people, who fled violence as herdsmen and farmers clashed over land in 2018, remain displaced. Around half of them live in official camps in and around the state capital, Makurdi. 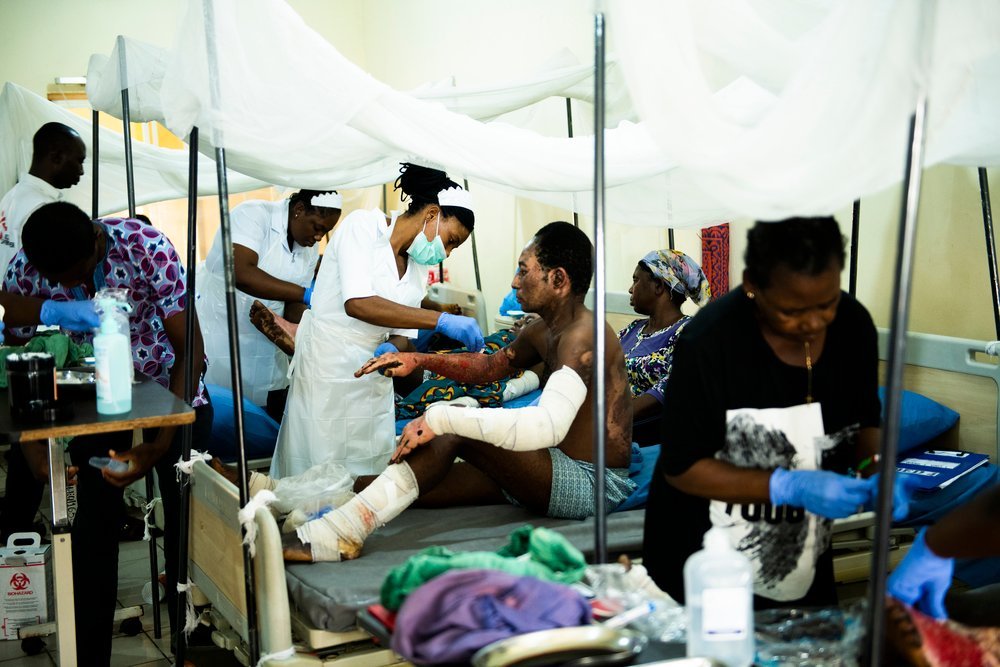 Benedicte Kurzen/NOOR
In the burns unit of Benue State University Hospital, an MSF nurse changes the bandages of a patient injured in an oil tanker explosion. Nigeria, August 2019.

In 2019, our support to the Ministry of Health included carrying out nearly 27,300 medical consultations, distributing relief items, building shelters, latrines and showers, and supplying drinking water inside the official camps. We also extended our activities to assist people living outside the camps.

Between July and December, we supported Benue teaching hospital with surgery, counselling and physiotherapy for burns patients following an oil tanker explosion.

Since July 2018, we have offered care to refugees from Cameroon’s Northwest and Southwest regions and host communities.

In November 2019, we handed over our activities to the Ministry of Health. During the project, we conducted close to 36,000 consultations, treated over 4,400 cases of malaria and offered mental healthcare to nearly 1,300 people. We also rolled out sexual and reproductive health services, including responding to sexual and gender-based violence.

Healthcare for women and children

The focus of our activities in Jahun general hospital, Jigawa state, is comprehensive emergency obstetrics and neonatal care. In 2019, our teams assisted over 13,400 births, 70 per cent of which were complicated cases. A specialised team at the hospital also performed vesico-vaginal surgery on 302 women with obstetric fistula, a condition resulting from prolonged or obstructed labour. In addition, our staff supported basic emergency obstetric and neonatal care in four other facilities in the area.

In Port Harcourt, Rivers state, we run two clinics offering medical care and mental healthcare to an increasing number of victims of sexual violence. During the year, we treated 1,424 new patients, 61 per cent of them under 18 years old.

In 2019, 938 patients completed chelation therapy in our treatment programme for children under five affected by lead poisoning associated with artisanal gold mining in Zamfara state. In October, together with the Ministry of Health, Occupational Knowledge International (OKI) and TerraGraphics International Foundation (TIF), we published results from the pilot programme we ran in Niger state from 2016 to 2018, showing how safer mining practices reduced blood lead levels by 32 per cent. We continue to treat lead poisoning cases, carry out operational research and advocate solutions with our partners and the federal authorities.

Noma is a gangrenous disease that causes disfigurement. It affects young children in particular, leaving scars that only complex reconstructive surgery can repair. Four times a year, we send specialised surgeons, nurses and anaesthetists to support noma treatment at Sokoto Children’s Hospital. As well as surgeries, we provide nutritional and psychosocial care and physiotherapy. In 2019, our teams carried out 170 surgical interventions and 530 individual mental health consultations. With the Ministry of Health, we also conduct outreach with a focus on early detection and treatment in Sokoto, Kebbi, Niger and Zamfara states.

In 2019, we continued to call for recognition of, and solutions to, noma, through medical conferences, advocating increased surgical capacity, and screening the MSF-supported documentary ‘Restoring Dignity’ across Nigeria and worldwide.

In Ebonyi state, in response to an outbreak of Lassa fever – an acute haemorrhagic illness – which was declared a national emergency, we assisted the state and federal ministries of health and the Nigerian Centre for Disease Control with technical support and staff training at a teaching hospital in Abakaliki. 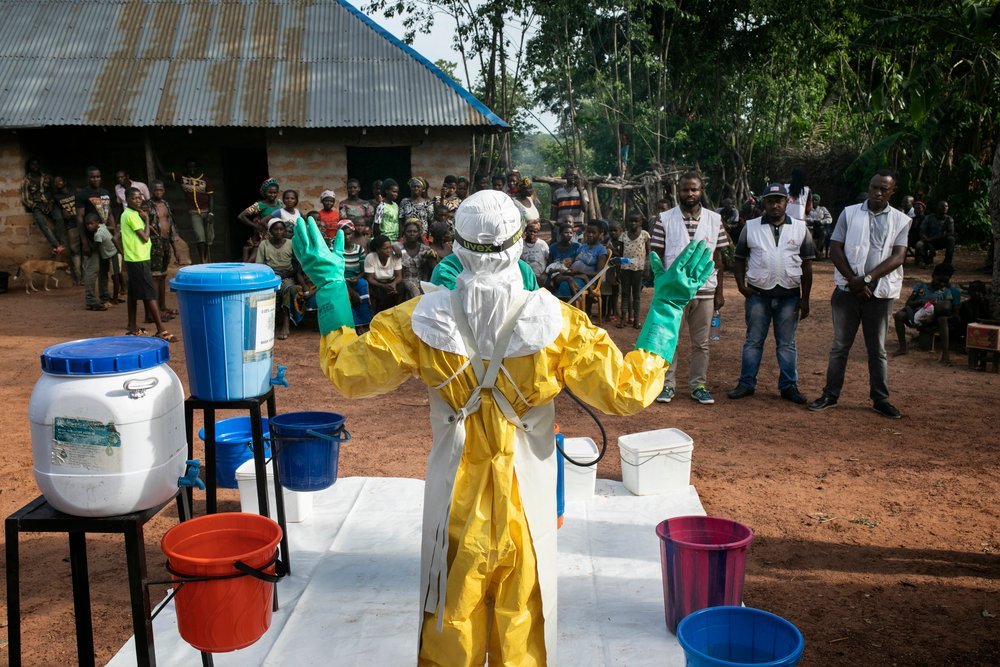 Albert Masias/MSF
An MSF water and sanitation team arrives in Ndiovu village to disinfect the house of a patient diagnosed with Lassa fever in Abakaliki. Nigeria, May 2019.