In Pakistan, Médecins Sans Frontières (MSF) focused on supporting the national response to COVID-19, while ensuring continuity of care in essential paediatric, maternity and trauma services.

Stretching from the Himalayas to the Arabian Sea, the Muslim-majority state of Pakistan is one of the most populous countries in the world, with more than 169 million people living within its borders. 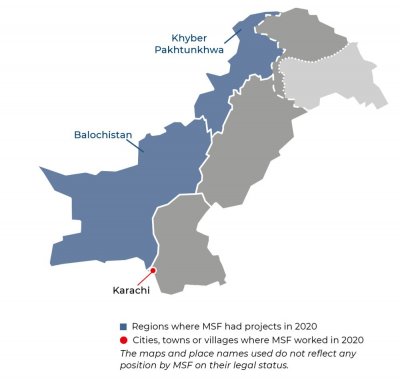 Home to what are thought to be some of the earliest human settlements, modern Pakistan was born out of the partition of the Indian sub-continent in 1947 and has faced both domestic political upheavals and regional confrontations.

Médecins Sans Frontières/Doctors Without Borders (MSF) first began working in Pakistan in 1986 and since then has assisted in numerous natural disasters and provided healthcare to victims of conflict.

Today, women and children in particular suffer from the lack of access to healthcare and there is an overwhelming need for neonatal care.

Our activities in Pakistan are funded solely by donations from individuals, with no institutional or government contributions.

MSF launched a range of COVID-19 activities, including infection prevention and control, screening and treatment in some of the worst-hit areas of the country. In April, we installed a COVID-19 screening system at Timergara District Headquarters hospital in Lower Dir, to help protect against the virus and prevent it from spreading inside the facility to healthcare workers, patients and their caregivers and, by extension, outside in the community. For six months, we also ran an isolation ward that, at the peak of the first wave of the outbreak in June 2020, had 30 beds for patients with suspected and confirmed COVID-19. Those requiring ventilator support were referred to specialist care facilities in Peshawar.

The spread of COVID-19 among staff at our women’s hospital in Peshawar forced us to suspend activities for six weeks. The services resumed after structural changes in the hospital, the establishment of an isolation area, and the implementation of strict infection prevention and control measures, including a COVID-19 screening system for patients and their caregivers. 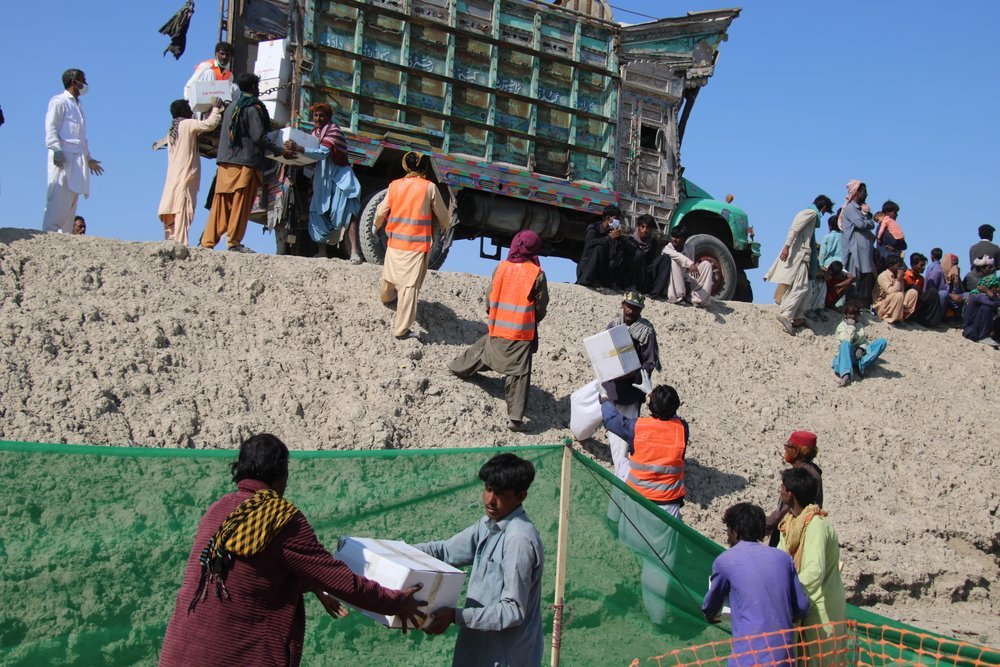 In August, in Chaman, a town in Balochistan located on the border with Afghanistan, MSF supported the establishment of a 32-bed isolation ward in Killa Abdullah New District Headquarters hospital, providing electricity and waste management, as well as personal protection equipment (PPE) for healthcare workers. Our teams also screened people entering the hospital.

In Karachi, Pakistan’s worst-affected city, MSF worked with the Ministry of Health to distribute around 160,000 reusable cloth masks and 70,000 bars of soap to over 20,000 households in Machar Colony, a densely populated slum, where physical distancing was hard to maintain. Through teams on the ground and a media campaign, we conducted extensive awareness-raising activities on ways for people to protect themselves and prevent the spread of the virus.

MSF also donated drugs and PPE to the provincial authorities of Sindh and Khyber Pakhtunkhwa.

COVID-19 was not the only emergency that struck Pakistan in 2020. Torrential rains during the monsoon season led to flooding in more than 350 villages in Sindh’s Dadu district. MSF set up mobile clinics as part of a post-emergency response and treated more than 4,000 people in a month. We also distributed relief items including cooking, hygiene and shelter kits to around 2,500 families, rehabilitated the main water supply sources and distributed water purification tablets. 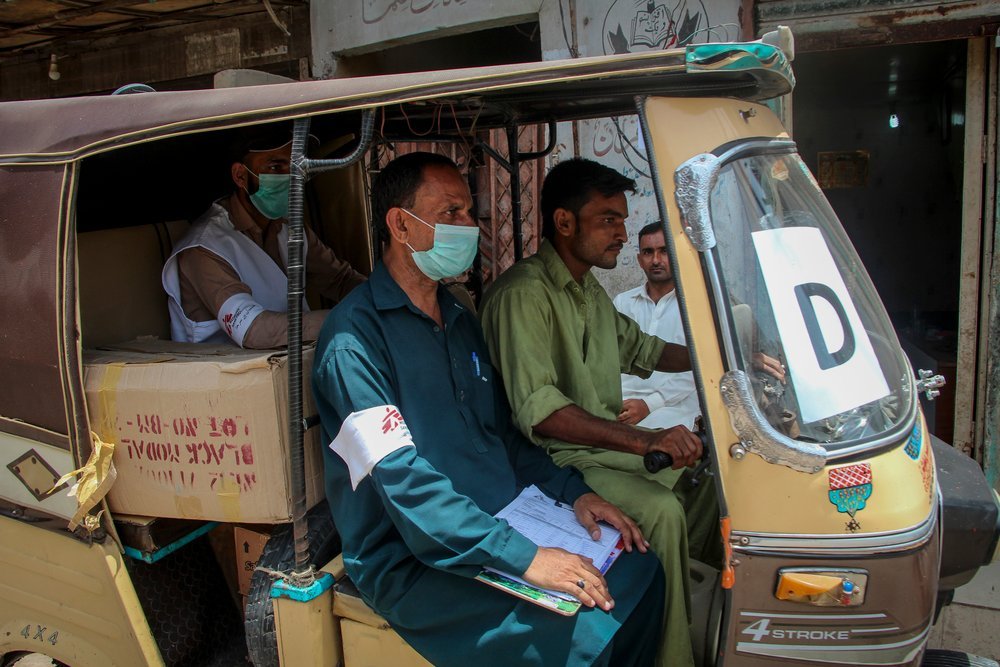 © Nasir Ghafoor/MSF
MSF health promoters provide masks and soap to community health workers who will be distributing them to people living in Machar Colony in Karachi, to help prevent the spread of COVID-19. Pakistan, July 2020.

We donated mosquito nets in Sindh and Khyber Pakhtunkhwa, and worked with the health authorities in both provinces to disseminate transmission prevention and vector control messages on dengue fever when health facilities started to report cases.

COVID-19 posed further barriers to healthcare for women and children in Pakistan, where the availability of free, high-quality services is already limited, especially in rural settings. Many public and private facilities closed temporarily due to fear of infection.

In spite of several challenges, such as staffing issues and a shortage of drugs and PPE caused by high demand and restrictions on exporting items from Europe, our teams continued to provide essential reproductive, neonatal and paediatric care at five different locations in Balochistan and Khyber Pakhtunkhwa provinces.

Local communities, Afghan refugees and people from the border areas benefited from MSF’s comprehensive 24-hour emergency obstetric services, which include surgery and referrals for complicated cases. We also operate a nutrition programme for severely malnourished children in Balochistan. In addition, MSF runs the only emergency room in Chaman for the management and referral of critical trauma cases.

Our hepatitis C programme in Machar Colony, Karachi, includes screening, diagnosis, treatment and counselling, as well as health promotion activities. From March to June, to avoid possible exposure to COVID-19, we reduced our timetable at the clinic to two days per week and patients scheduled for monthly visits were given enough medication for three months.

Cutaneous leishmaniasis is a skin infection caused by a parasite transmitted by the bite of a phlebotomine sandfly and is endemic in Pakistan. In March, MSF opened a new diagnostic and treatment centre at the District Headquarters hospital in Bannu, Khyber Pakhtunkhwa, for patients with the disease. We run four other treatment centres in Quetta and Peshawar.

However, following the authorities’ decision to close outpatient services because of COVID-19, we had to suspend these activities between March and July.

Handover of activities in Timergara

In March, we began the gradual closure of our Lower Dir project with the handover of the emergency room to the Department of Health. Our teams had provided over a million emergency care consultations to patients since opening the project in 2008.

The second step was the handover of the neonatal unit, which had admitted more than 9,000 babies between May 2014 and August 2020. The handover process was finalised in January 2021.

We continued our advocacy and awareness-raising activities regarding the safe use of labour-inducing drugs such as oxytocin, which are often administered unnecessarily and outside of health facilities. Misuse of such drugs is linked to maternal and neonatal health complications.

In Pakistan, oxytocin is available in many pharmacies without prescription and is a favoured means of speeding up labour and relieving pain. We used mass communications tools to promote safe medical practices, and engaged parliamentarians and the Ministry of Health to reinforce existing legislation related to labour-inducing medicines.

The availability of free, high-quality medical care for women and children is limited, especially in rural areas of Pakistan. Even when services are available, many people cannot afford them. We provide reproductive, neonatal and paediatric care at five different locations in Balochistan and Khyber Pakhtunkhwa provinces.

Local communities, Afghan refugees and people who cross the border from Afghanistan to seek medical assistance benefit from MSF’s comprehensive 24-hour emergency obstetric services, which include surgery and referrals for complicated cases. 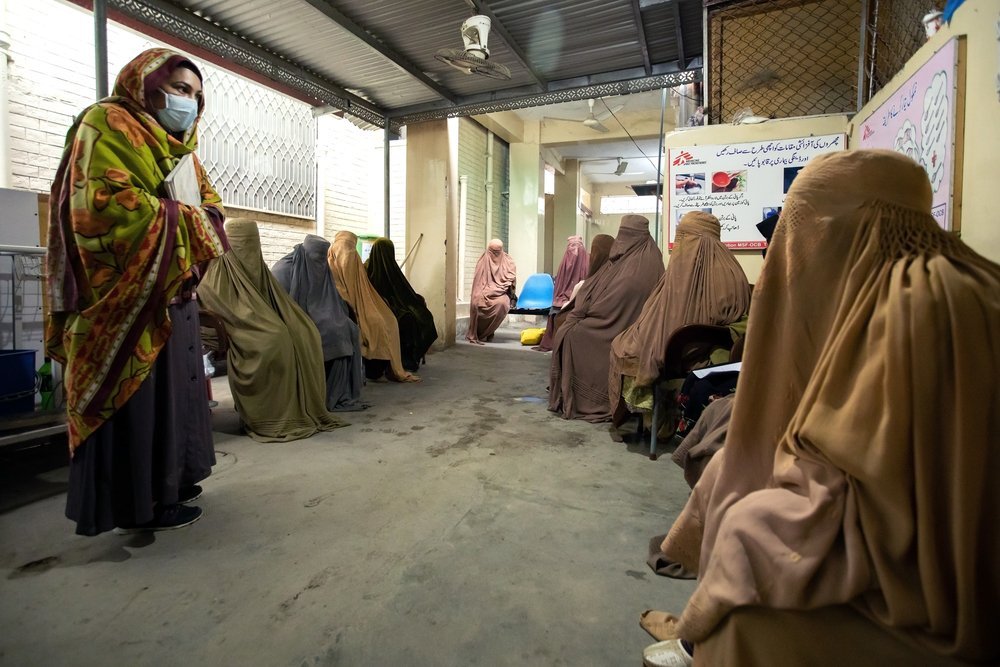 In 2019, we also ran the emergency department in Timergara hospital, Lower Dir district. But after over 10 years of services, MSF announced that we would gradually hand over our activities in Lower Dir to the Khyber Pakhtunkhwa health department by January 2021. 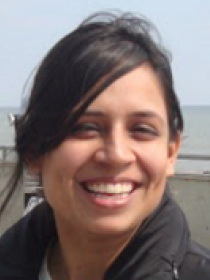 Baby Shahida taught me to understand the ‘good’ in ‘goodbyes’ >

Mother and child health in Balochistan

In Chaman district headquarters hospital, near the border with Afghanistan, our teams work with the Ministry of Health to provide reproductive, neonatal and paediatric healthcare. We also manage trauma cases in the emergency room and offer inpatient and outpatient nutritional support for malnourished children under the age of five. These services are available to local residents, Afghan refugees and people who cross the border seeking medical assistance. 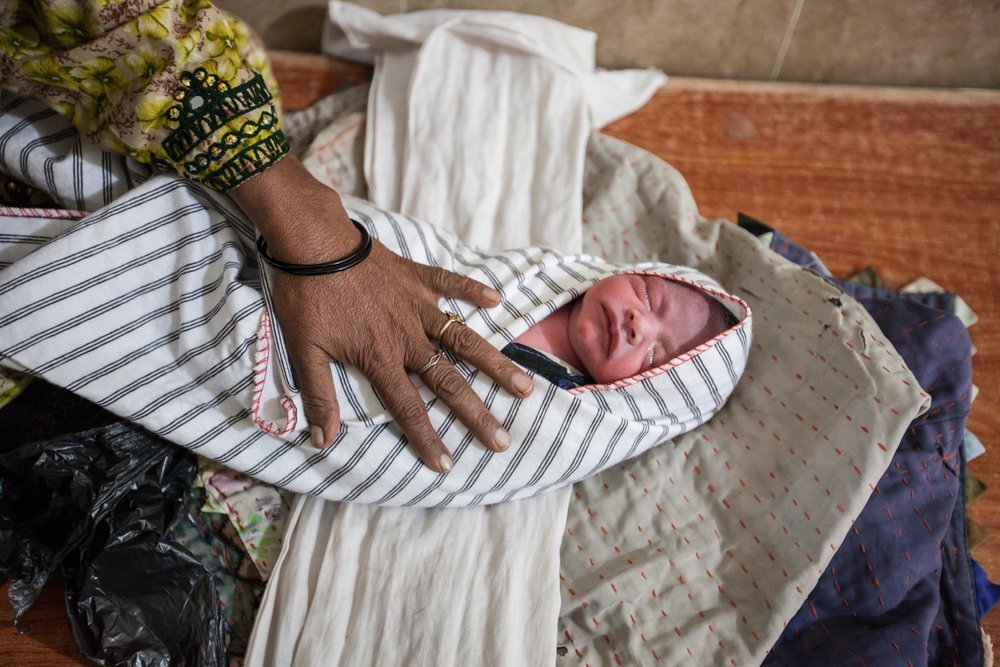 Khaula Jamil
A newborn baby at an MSF facility in Dera Murad Jamali is swaddled by her grandmother before being taken home. Balochistan, Pakistan, November 2018. 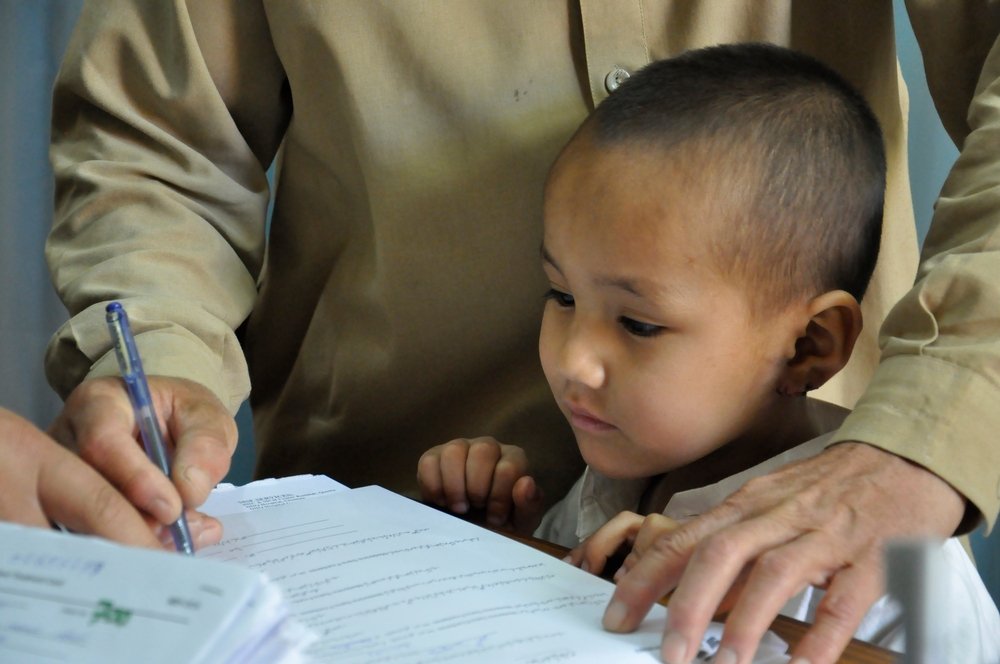 We set up a water treatment plant at the hospital to ensure availability of clean water for patients, their caregivers and medical staff. In the eastern districts of Jaffarabad and Naseerabad, our teams treated over 9,000 malnourished children through a network of outreach sites and mobile clinics.

Around 75 per cent of the patients at the women’s hospital in Peshawar come from rural areas of the district and what were previously known as the Federally Administered Tribal Areas. Neonatal mortality rates are high, and we focus on high-risk pregnancies and people with reduced access to care. We also provide comprehensive 24-hour emergency obstetric care. In 2018, our team assisted almost 4,900 births and admitted 600 newborns to the neonatal unit. 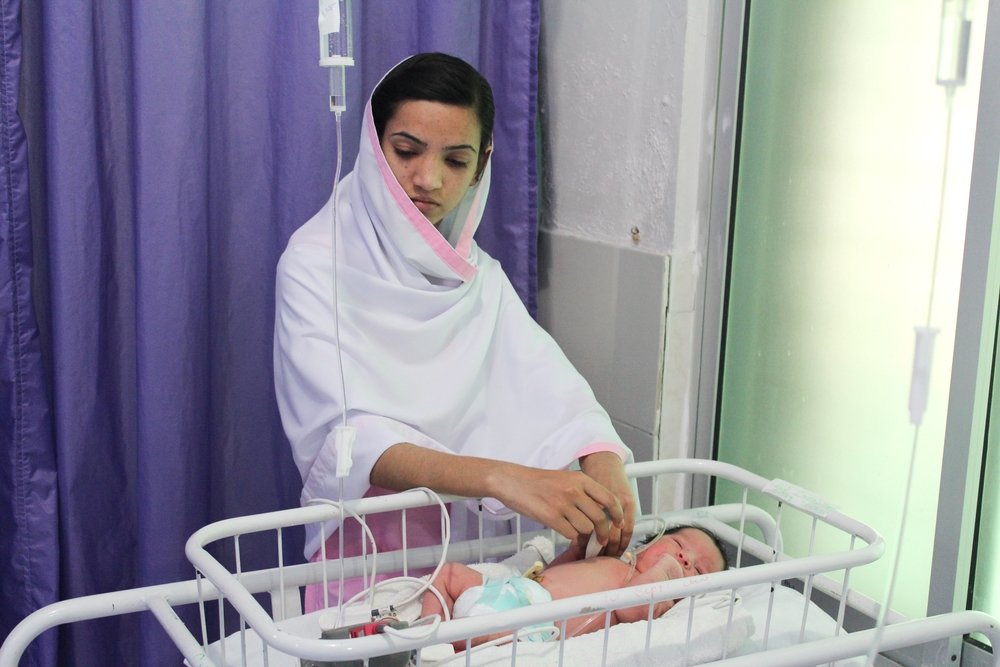 Nasir Ghafoor/MSF
A nurse is caring for a newborn baby in the newborn unit of DHQ Timergara, Pakistan.

MSF assists the Pakistani authorities with emergency response preparedness in case of disease outbreaks or natural disasters. In 2019, during a dengue fever outbreak across the country, we supported the health authorities through awareness campaigns and donations of mosquito nets, logistical and medical equipment and insecticide.

We also donated medical equipment to a hospital in Pakistani-administered Kashmir after it was damaged by an earthquake in September.

MSF runs four treatment centres for cutaneous leishmaniasis. This neglected parasitic tropical disease is transmitted by the bite of a sandfly and characterised by disfiguring and painful skin lesions. Although not life-threatening, the severe physical disfigurement can lead to stigmatisation and discrimination. Cutaneous leishmaniasis is endemic in parts of Pakistan, but treatment is either unavailable or too expensive for most people.

Consequently, they rely largely on international organisations such as MSF for care. As well as diagnosis and treatment, our teams offer health education and psychological counselling. During an outbreak of the disease in 2019, we donated medical supplies to the Khyber Pakhtunkhwa Department of Health.

Pakistan has one of the highest prevalence rates of hepatitis C globally. In Machar Colony, a densely populated slum in Karachi, MSF teams provided nearly 8,740 consultations for hepatitis C, which included 1,410 new patients who were enrolled on treatment.

The clinic provides diagnosis, treatment, psychological counselling and health promotion activities at a basic healthcare level in a decentralised model of care introduced by MSF in 2015.