More than 7,000 islands make up the Philippines, but the bulk of its fast-growing population – now more than 100 million people – lives on just 11 of them. 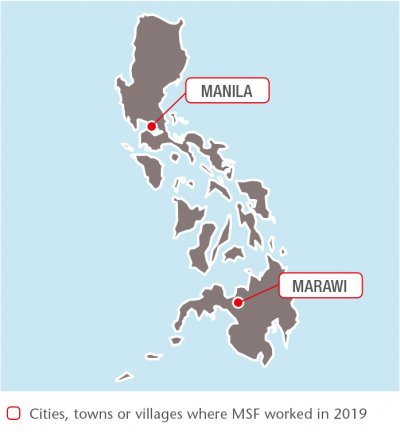 After recovering from an economic downturn in 2004, the Philippines now ranks as one of the most promising newly-industrialised countries, with its export economy moving away from agriculture to electronics, petroleum and other goods.

Although endowed with many fine beaches and a growing tourism industry, much of the country is mountainous and prone to natural disasters. It is often lashed by typhoons and other storms.

MSF's work in the Philippines in 2019

Since 2016, we have been running a comprehensive sexual and reproductive health programme through clinics in San Andres and Tondo, two of the most densely populated and impoverished areas in the capital.

Working in collaboration with a local organisation, Likhaan, and focusing in particular on the health needs of girls and young women, we offer family planning, ante- and postnatal care, management of sexually transmitted infections, and screening and treatment for cervical cancer. Victims of sexual violence face stigma in the Philippines, yet we continue to see a steady increase in the number coming to our clinic for treatment.

In addition, our teams operate a mobile clinic four times a week, mainly in Tondo, for patients unable to come to the fixed clinic.

In 2019, our teams conducted a total of 15,049 family planning sessions and screened 4,352 women for cervical cancer.

Of these, 289 were treated with cryotherapy, a procedure that freezes a section of the cervix using nitrogen gas to destroy the targeted area. We also worked with the health authorities to vaccinate 2,229 girls against the human papillomavirus, which is responsible for cervical cancer.

We continued to work in Marawi city, in the Bangsamoro Autonomous Region in Muslim Mindanao, the region with the poorest health indicators in the Philippines, where violent confrontations are frequent.

Over 70 per cent of Marawi’s health facilities were destroyed and around 200,000 people fled their homes during a battle for control of the city in 2017.

In 2019, more than 70,000 people were still internally displaced, with little access to medical services. We support three facilities in the area with basic and mental healthcare and treatment for non-communicable diseases.