Due to prolonged conflict, drought and other climate hazards, over 2.6 million people were still displaced in Somalia and Somaliland in December 2019, and nearly five million were considered food insecure.

We are constantly assessing whether conditions will allow our staff to continue operating safely, and our patients and health facilities to be respected and protected of violent attacks in the country located in the Horn of Africa. 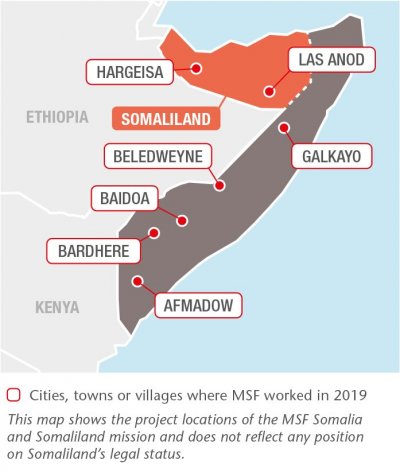 After an absence of almost four years due to extreme attacks on staff, our aim is to ensure that people have access to medical care in areas where needs are critical and the security conditions allow us to operate.

Access to healthcare remained limited in parts of the country, malnutrition rates among children were well above the emergency threshold in many areas and the number of deaths during pregnancy and childbirth ranked among the highest in the world.

Throughout the year, Médecins Sans Frontières (MSF) continued rolling out new operations across Somalia and Somaliland, supporting medical activities in hospitals in towns and cities, with a focus on maternal, paediatric and emergency care, nutrition, and diagnosis and treatment of tuberculosis (TB).

To address the health needs of women and children, we supported the maternity ward at Bay regional hospital in Baidoa, SouthWest state, and started activities in the paediatric department. 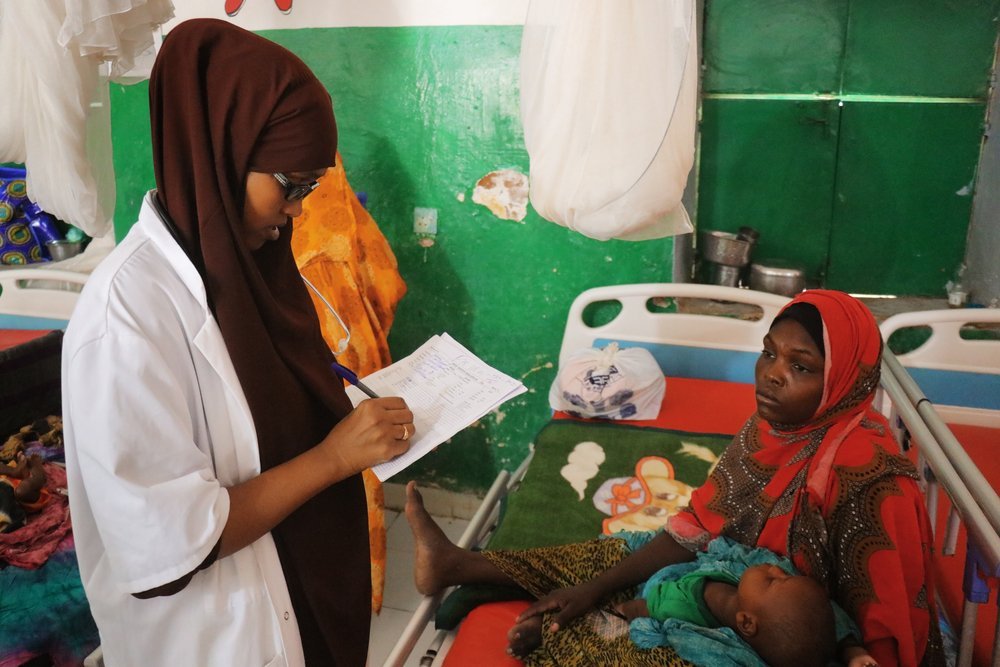 In Baidoa, MSF carried out a fistula campaign, treating 34 women suffering from this stigmatising condition for which there are no available services in the public health system. We aim to carry out similar campaigns in other parts of the country in 2020.

We also scaled up medical care for women and children in Galkayo, a city in central Somalia divided administratively between Puntland and Galmudug states, where we first resumed operations after returning to the country in 2017. In addition, a team started assisting births and complicated pregnancies at the hospital in Las Anod, a city in Somaliland.

In Galkayo North, we strengthened our medical activities in Mudug regional hospital, the city’s main referral facility, and ran frequent mobile clinics in displacement settings. Our teams here worked on treating patients with TB, a highly prevalent disease that spreads easily in overcrowded living conditions. At the end of 2019, we started to support Galkayo South hospital.

In 2019, we launched a new TB project in Somaliland, supporting the treatment of the multidrug-resistant form of the disease in a dedicated hospital in Hargeisa and collaborating with TB centres in Burao, Berbera and Borama.

In addition to our regular malnutrition programmes in Galkayo and Las Anod, we frequently carried out short interventions focusing on nutritional care for malnourished children, but also providing vaccinations, eye surgery and staff training in Afmadow and Bardhere, in southern Jubaland state.

For the first time since 2012 and after our return to the country, we managed to launch an emergency response in a location without a regular project.

In the last two months of the year, we responded to severe flooding in central Hirshabelle state. Beledweyne town, where the banks of the Shabelle river burst, was the most affected area, with approximately 270,000 people displaced.

In the first phase of the response, MSF trucked in safe drinking water and delivered tents and relief items such as cooking utensils and sachets of therapeutic food.

In the second phase, the teams decontaminated water wells and provided healthcare through mobile clinics in displacement sites around the city, including nutritional support to malnourished children.