In September, the Blue Nile burst its banks, causing devastating floods that affected more than three million people across 17 of Sudan’s 18 states.

Sudan was once the largest and most geographically diverse state in Africa, and was also home to one of the continent’s longest-running civil wars. 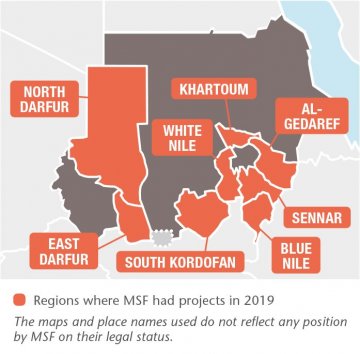 However, various outstanding secession issues – especially the question of shared oil revenues and the exact border demarcation – have continued to create tensions between the two successor states.

Médecins Sans Frontières/Doctors Without Borders (MSF) has been working in Sudan since 1979, providing care for people caught up in conflict, treating neglected tropical diseases and filling general healthcare gaps.

In Sudan, Médecins Sans Frontières (MSF) assisted with the COVID-19 response and provided emergency assistance to people affected and displaced by violence, including those who fled Tigray, Ethiopia. From April, MSF started supporting the national response to the pandemic in the capital, Khartoum, by running training to improve infection prevention and control measures, ward and triage circuits, and water and sanitation provision inside health facilities. This training, run in collaboration with the Ministry of Health and the World Health Organization, was provided to healthcare professionals in leadership roles at 90 hospitals in Khartoum state, as well as staff, so they could replicate the training sessions in hospitals in other states. 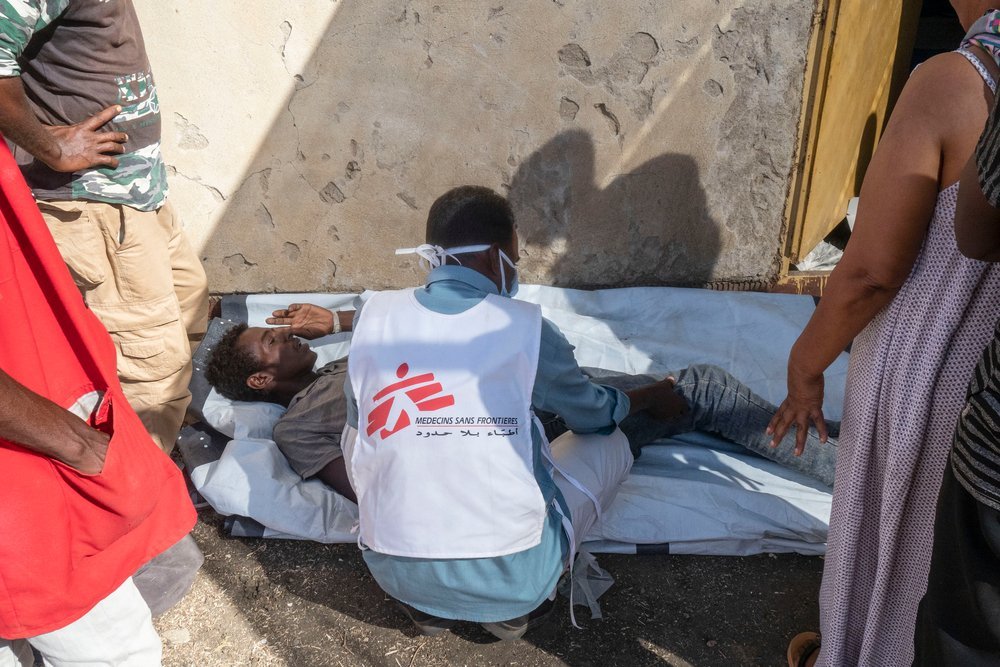 Thomas Dworzak/Magnum Photos
An Ethiopian refugee in a very poor state of health is taken care of at the clinic set up by MSF, which is the only medical facility of Al Hashaba transit camp. Ethiopian refugees fled the central government's military offensive against what is perceived as separatism by the Tigray regional government and its military branch TPLF. When crossing into Sudan the refugees settle in unoccupied, unfinished houses at Al Hashaba Village 8, built for local Sudanese being resettled after the building of a Tekeze river dam. Some Sudanese families and military live in the camp, village Al Hashaba. The Sudanese government tries to move the refugees into the Um Rakuba camp. MSF runs the water supplies and has an emergency clinic in the camp. SUDAN, Gedaref Region, Eastern border with Ethiopia/Tigray Region. Al Hashaba. 2020/12. 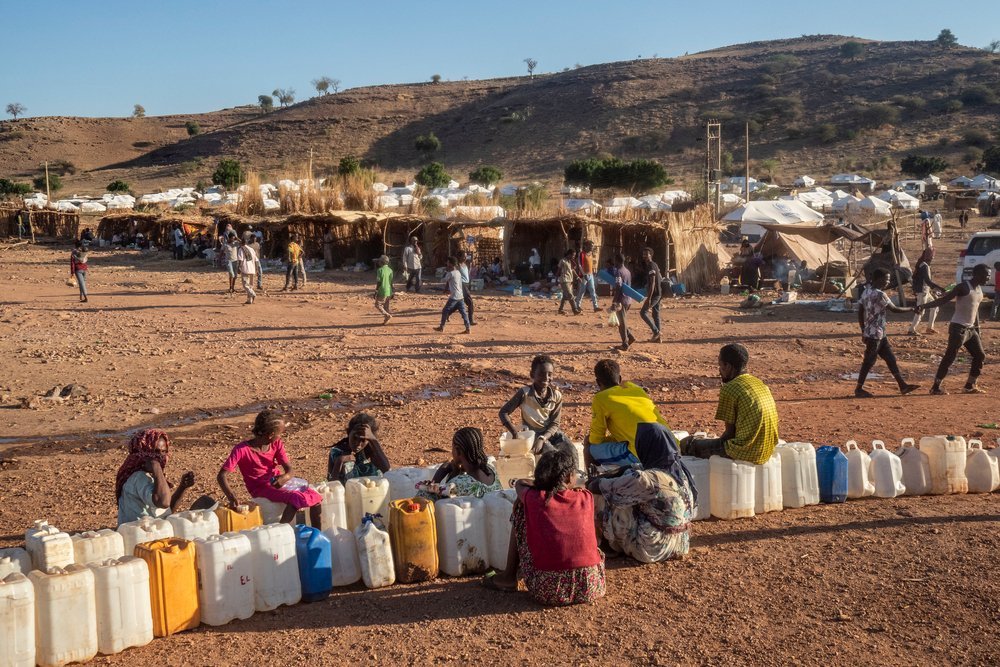 Thomas Dworzak/Magnum Photos
Refugees with their jerry cans at a water point in Um Rakuba refugee camp. Ethnic Tigray, Ethiopian, refugees who fled the central government's military offensive against what is perceived as separatism by the Tigray regional government and its military branch TPLF. When crossing into Sudan the refugees are transferred and settled in Um Rakuba, which was already a site of camps during the 1984 famine. MSF runs the water supplies and has an emergency clinic in the camp. SUDAN, Gedaref Region, Eastern border with Ethiopia/Tigray Region. Um Rakuba Camp. 2020/12.

In August, we opened a COVID-19 treatment centre in Omdurman Teaching Hospital, in partnership with the Ministry of Health, for patients with moderate to severe symptoms of the virus. During the year, we also conducted health promotion and awarene-raising sessions on COVID-19 in local communities and healthcare centres across the country. Following violence and subsequent displacement, we provided emergency response assistance to people, via mobile clinics in Geneina in West Darfur and Sortony in North Darfur, and by donating humanitarian aid in Port Sudan, Red Sea State and Gereida, South Darfur. In September, the Blue Nile burst its banks, causing devastating floods that affected more than three million people across 17 of Sudan’s 18 states. MSF provided emergency response, including the River Nile state, where we distributed relief items such as hygiene kits and constructed latrines. 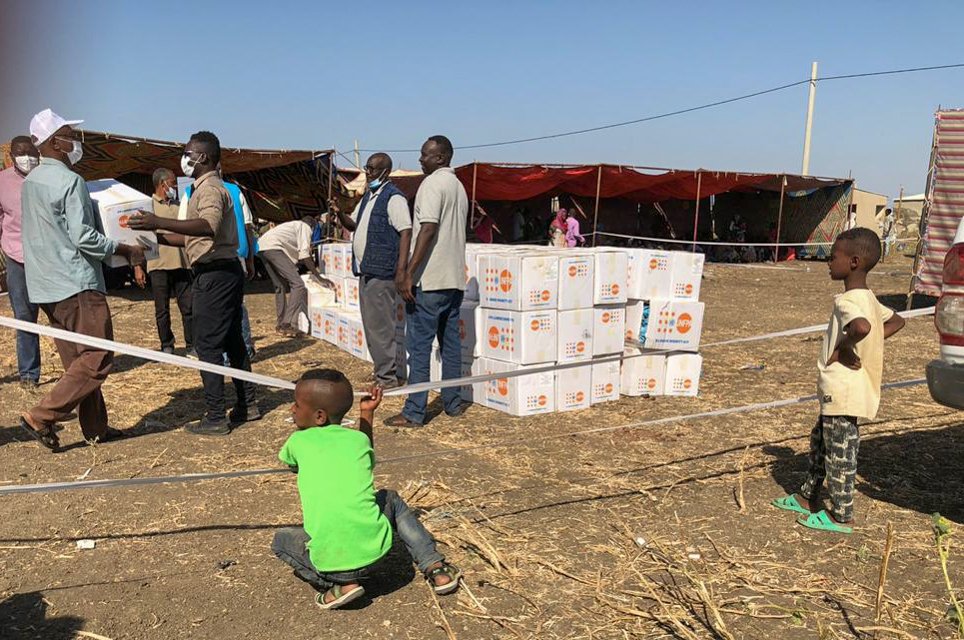 MSF
Um Rakuba camp, Gedaref State, Sudan. (November, 2020) On 10 November, the first wave of people from Ethiopia started to arrive Sudan. As of 25 November, UNHCR has registered 42,000 arrivals but the number is likely higher, as many have not been registered. Today people are entering Sudan at three points: the main one is Hamdayet in Kassala state, which accounts for 68% of arrivals. Nearly 30% are entering Gedaref state, while 2% are entering Sudan further south, in the Blue Nile state. After screenings and registration by the UN, some of the people arriving in Hamdayet are being placed on buses and driven to Um Rakuba camp in Gedaref state. This is a 12-13 hour drive. The camp is meant to host 10,000 people, and there are already nearly 8000 people in it. Discussions are ongoing about establishing more camps and sites to host people in case numbers continue to increase. The sanitary conditions in the camp are inadequate. There are only 58 latrines, compared the standard minimum of 288 compared to how many people are staying in the camp.

During an outbreak of a viral haemorrhagic fever caused by mosquitoes in Northern State, we provided treatment and water and sanitation activities. In November, when conflict broke out in Tigray, Ethiopia, thousands of people fled across the border into Sudan. We sent teams to assist refugees in Al-Gadaref and Kassala states, providing screening for malnutrition, general healthcare consultations, and water and sanitation in two camps, and at the main border crossing points. Throughout the year, we continued our regular medical activities in Khartoum, and in North, East, and Central Darfur states, as well as White Nile, AlGedaref and South Kordofan states. These activities included nutritional support for children, maternity care, and treatment for diseases such as tuberculosis, HIV and kala azar (visceral leishmaniasis). 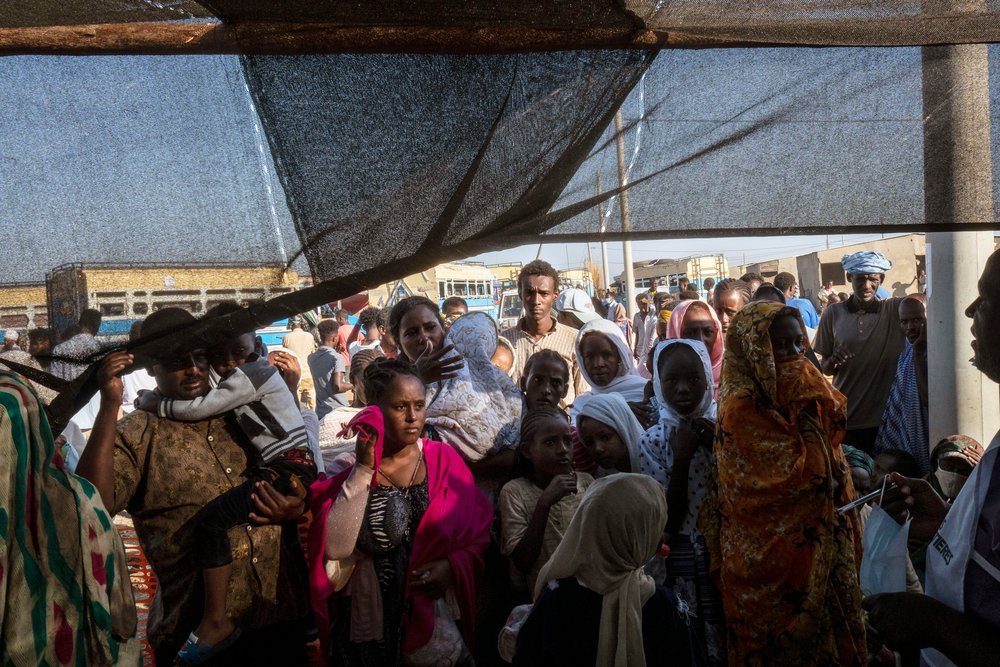 Thomas Dworzak/Magnum Photos
Big influx of new arrivals at the clinic set up by MSF, which is the only medical facility in the camp. (December, 2020). Ethnic Tigray, Ethiopian, refugees who fled the central government's military offensive against what is perceived as separatism by the Tigray regional government and its military branch TPLF. When crossing into Sudan the refugees settle in unoccupied, unfinished houses at Al Hashaba Village 8, built for local Sudanese being resettled after the building of a Tekeze river dam. Some Sudanese families and military live in the camp, village Al Hashaba. The Sudanese government tries to move the refugees into the Um Rakuba camp. MSF runs the water supplies and has an emergency clinic in the camp. SUDAN, Gedaref Region, Eastern border with Ethiopia/Tigray Region. Al Hashaba. 2020/12.

The protests led to the ousting of President Omar al-Bashir in April after nearly 30 years of rule and paved the way for a political transition, agreed between civilian and military representatives.

During the months of the protests, we treated people gathered in the crowded ‘sit-in’ area of the Sudanese capital for conditions such as dehydration. When clashes between demonstrators and security forces took place, our teams provided medical care and referred people to the main hospitals when necessary.

Other short-term interventions included addressing the needs of people affected by floods in Khartoum and White Nile states; and tackling outbreaks of disease, such as malaria in North Darfur state and cholera in Blue Nile, Sennar and Khartoum states.

MSF was the only international organisation directly supporting victims of violence during the protests in the emergency room of Khartoum’s largest hospital, Omdurman Teaching Hospital.

The emergency intervention turned into a regular project by the end of 2019.

In Al-Gedaref, we maintained our diagnosis and treatment programme for kala azar (visceral leishmaniasis) and other neglected tropical diseases in Tabarak Allah hospital.

In 2019, our teams also provided supervision and training to local health workers and Ministry of Health staff and organised awareness-raising campaigns.

Our team contributed to scientific research by participating in a phase two, randomised, multicentric clinical trial.

In South Kordofan, in areas controlled by both governmental and opposition armed groups, MSF continued to focus on sexual and reproductive health helping women and newborns affected by the humanitarian crisis in the region to obtain free, high-quality care and referrals for specialist services.

Based in Dilling, support extends to other localities including Dalami and Habila.

In Tawila, North Darfur, we handed over to the Ministry of Health and other organisations some of the activities that we have been running since 2007 to assist isolated communities and people affected by chronic conflict and displacement. 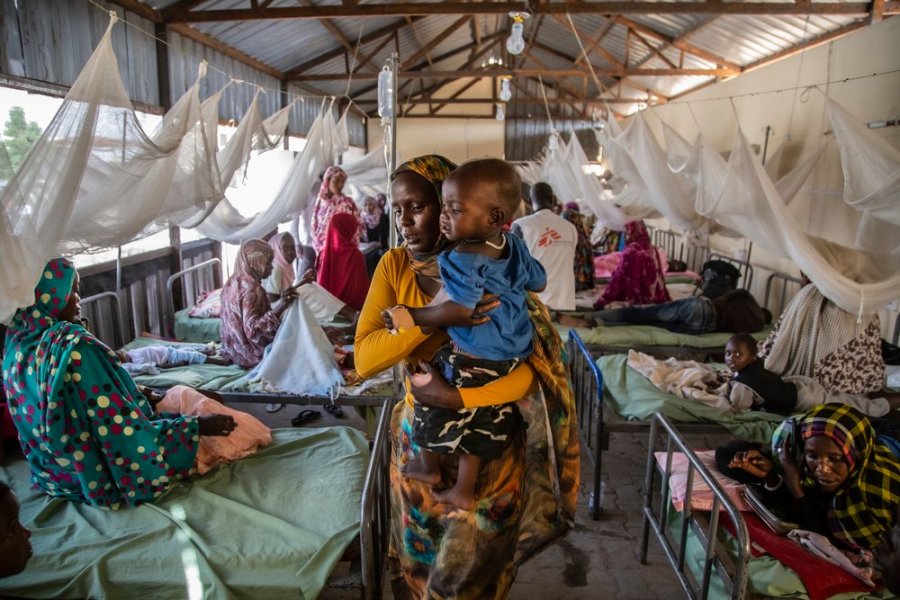 Igor Barbero/MSF
A mother holds her child in a ward for malaria patients at the paediatric hospital in El Fasher, North Darfur. Sudan, October 2019.

In East Darfur, we continued to run our health structure in Kario, a camp that hosts around 28,000 refugees from South Sudan.

Our teams offer primary and secondary healthcare, such as maternity services and nutritional support for children. The services are also accessible for local residents living in the region.

South Sudanese refugees have also been the main focus of our operations in White Nile state for the past five years.

By the end of 2019, there were still approximately 248,000 refugees living there, mostly in camps.

In December, we opened a new 85-bed hospital in Kashafa camp, upgrading existing services, and handed over a smaller health facility in Khor Wharal camp.

The upgraded facility treats patients with complicated conditions, including severely malnourished children and people with chronic infectious diseases, such as HIV and tuberculosis.