The political and economic crisis in Venezuela continues to take a heavy toll, with millions of people facing severe shortages of food, medicines and other basic goods.

On South America's northern coast, Venezuela is a country of striking natural beauty. 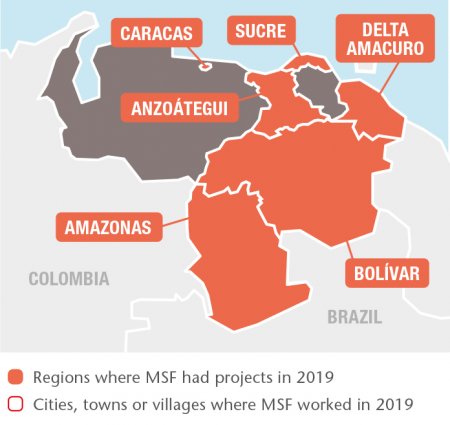 It is also among the most highly urbanised countries in Latin America.

The country has a wealth of natural resources, yet many Venezuelans live in poverty, often in shanty towns, some of which sprawl over the hillsides around the capital, Caracas.

Médecins Sans Frontières/Doctors Without Borders (MSF) first worked in the country in 2015.

In 2016, we began providing mental health care to victims of urban violence in Caracas.

The state of public health services is particularly alarming. Many hospitals across the country do not have supplies, operating equipment or even access to basic services such as water.

In 2019, Médecins Sans Frontières (MSF) scaled up our projects in Venezuela, rehabilitating hospitals and health posts, distributing medical supplies to facilities and patients, rebuilding water and sanitation systems and training staff, as well as continuing our usual medical activities.

In Amazonas state, we started rehabilitating the José Gregorio Hernández and the Mother and Child hospitals, as well as three clinics. In addition, we launched a pilot project to improve the medical supply system and the way we generate epidemiological data for each facility we support, in order to optimise our activities.

In Anzoátegui state, more than 25,300 people benefited during 2019 from the services we offer through a general healthcare centre, which include vaccinations, health promotion, and mental, sexual and reproductive healthcare.

In Caracas, one of the most violent cities in the world,* we worked with local organisations and public institutions to provide medical treatment and mental health support to victims of sexual and urban violence in Libertador and Sucre municipalities.

In 2019, we conducted nearly 580 medical consultations and 4,100 individual mental health sessions in the capital. 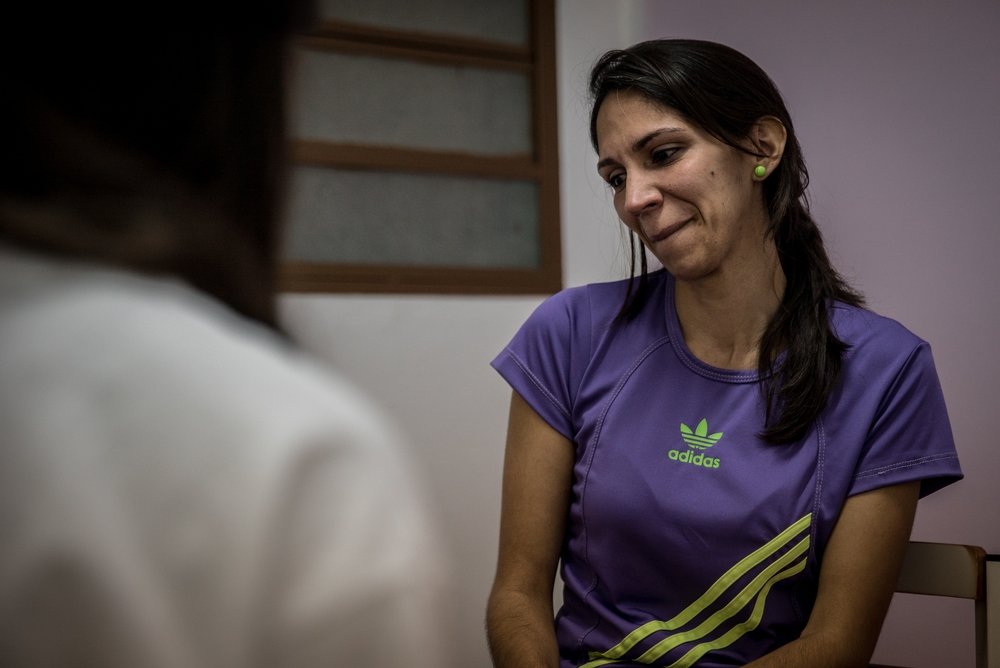 Marta Soszynska/MSF
Mental Health in Venezuela. Yaneiri's husband was murdered during an armed robbery in front of their house while leaving for work. Yaneiri was left alone with their two small children.

In addition, we started supporting Vargas hospital, one of city’s major health facilities, through a technical rehabilitation process of the infrastructure and biomedical equipment.

We continued working with the national malaria programme in Sifontes, Bolívar state, a mining area with the highest number of reported malaria cases in the country.

To support the Malariology Institute in Sucre state, where the numbers were particularly high, we detected the breeding hotspots for infected mosquitoes. 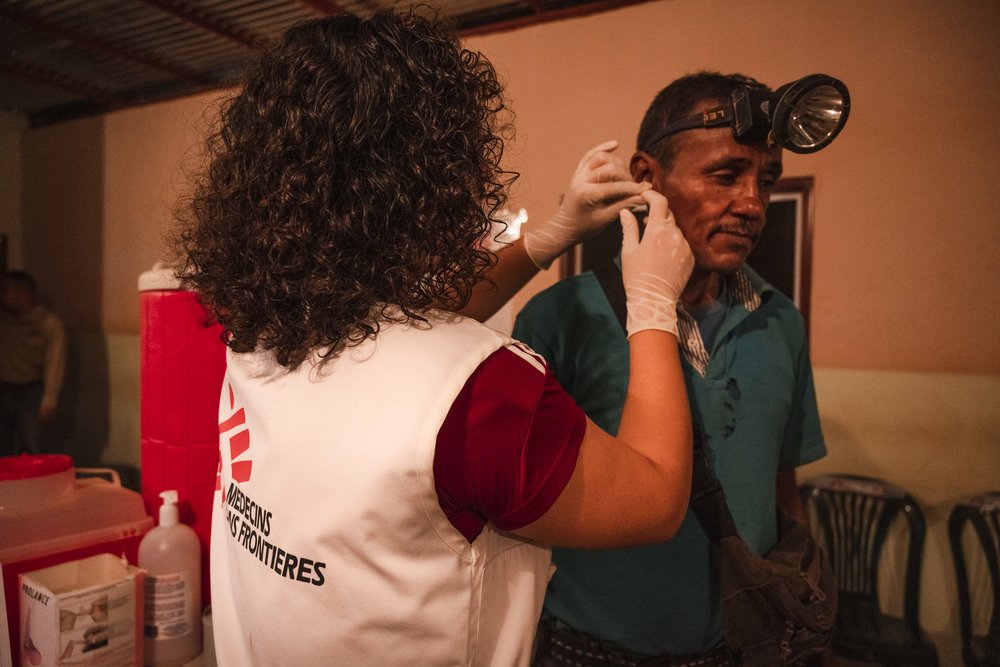 Adriana Loureiro Fernandez
Monserrat Vargas, MSF bioanalyst, takes a blood sample from 53-year-old Omar for a test to determine whether he has malaria. Bolívar, Venezuela, October 2019.

In Delta Amacuro state, we provided logistical and technical support to the Ministry of Health’s immunisation programme, which was expanded in order to reach remote communities in the far east of the country.

By travelling along the waterways, it was possible to administer routine vaccinations to nearly 2,400 people against diseases such as polio, measles, hepatitis B, diphtheria and yellow fever.

In 2019, we also responded to emergencies. We offered mental healthcare to people affected by the violent events in the first quarter of the year, during which we donated essential medicines and medical supplies to health workers. 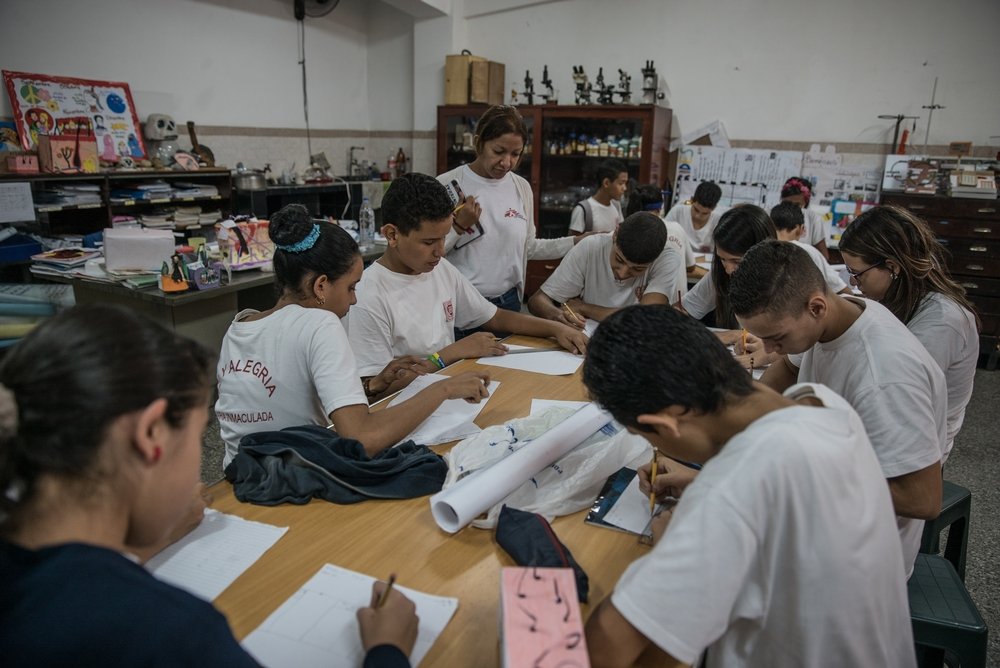 Marta Soszynska/MSF
MSF psychologists work with children of all ages, explaining the importance of mental health.

In addition, when a nationwide electricity blackout in March led to water shortages, we prevented and treated outbreaks of diarrhoea. We also trained public institution staff on water conservation.