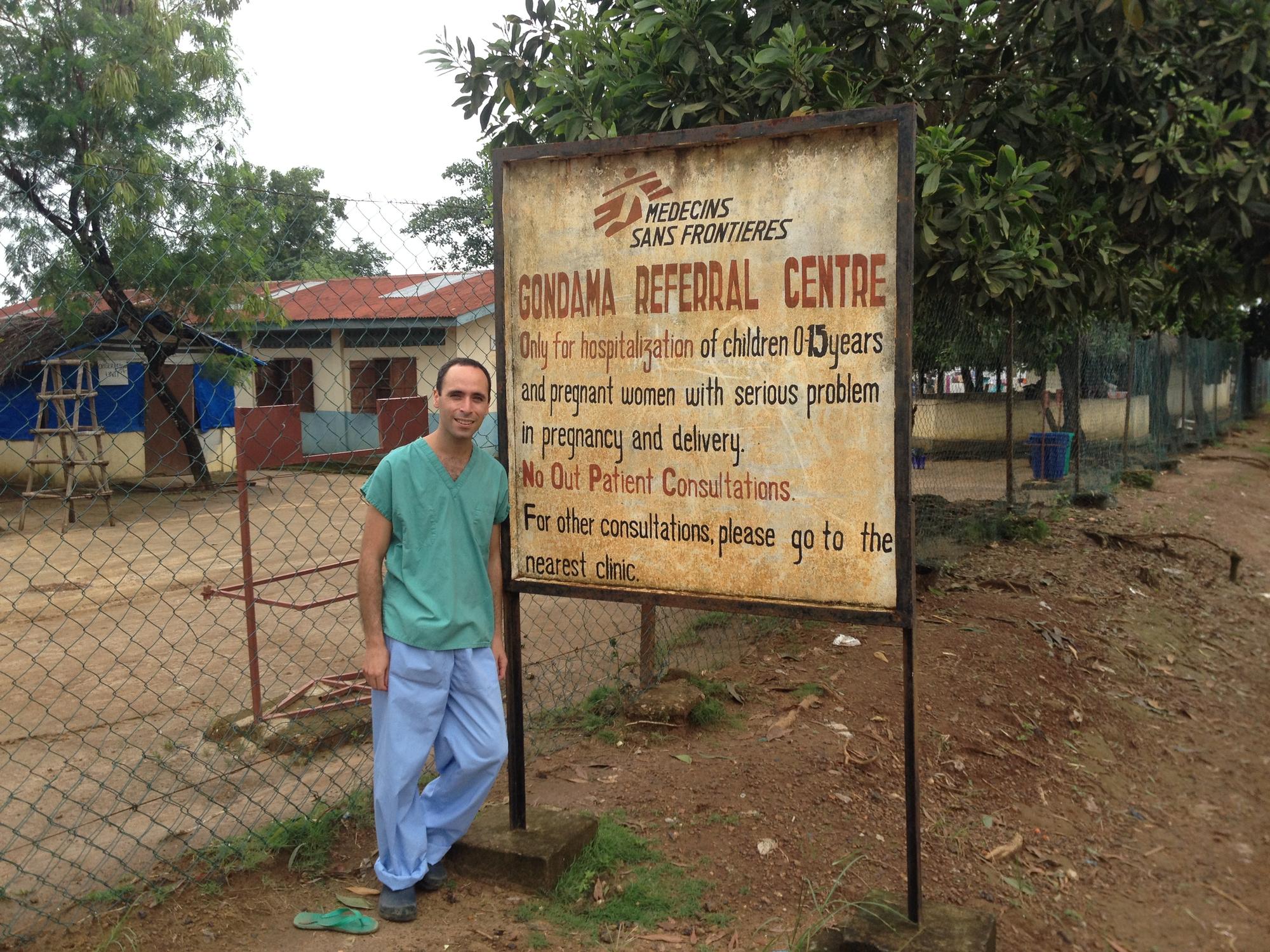 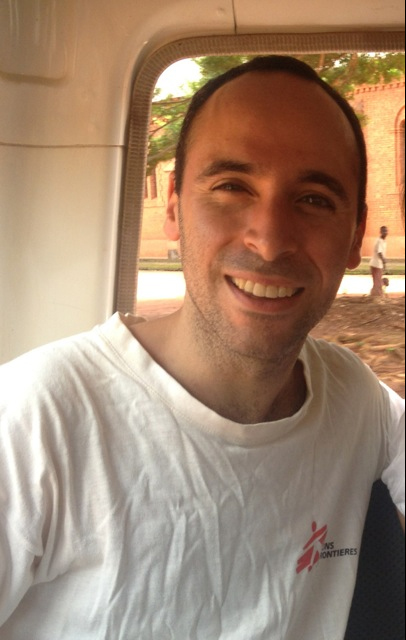 The shift pattern for obstetricians is to take a 24 hour shift every three days. I’m one of the new generation of UK doctors and have never worked a 24 hour shift in hospital before, so I knew whatever happened this would be a first for me.

The day itself started pretty routinely, I did the ward round and checked on how things worked and then settled down to wait for any patients.

The first case was a 40-year-old lady who gave a history of being 16 weeks pregnant, and bleeding heavily for three days. On arrival she was barely conscious and moaning in a language that the nurses could not understand. Her heart was racing, blood pressure through the floor, working very hard on breathing and had a burning temperature.

"She has bloody diarrhoea, tinnitus and hiccups - all signs of Ebola"

Once I had donned all the protective gear I approached her and peered through my googles (I felt like I was about to go snorkelling). She looked terrible. I quickly examined her; she’s bleeding but not much and mostly passing clots, she’s clearly miscarrying but the pregnancy has not yet been expelled and is the likely source of her infection. 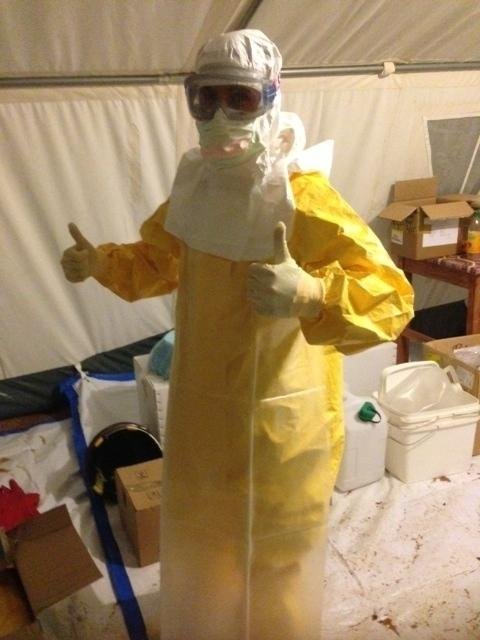 I ask if she’s been anywhere or taken anything to abort the pregnancy but getting a history is impossible, she’s delirious. There’s only very basic tests available in GRC, but I know she hasn’t got malaria and hasn’t got much blood left (the haemoglobin was 4.2 g/dl, normal is over 11!).

I begin giving her oxygen, intravenous fluids and antibiotics, and luckily there is blood in the bank so order two units for transfusion. I then gave her medicine to try and complete the miscarriage and empty her uterus of the infected pregnancy.

Later in the afternoon I get a call that a couple more patients have arrived, one is a re-admission the other is being kept off the ward. There is a foul smell coming from outside of the ward, I go to see. Sitting on a stool is a lady surrounded by a mist of flies.

She looks anorexic, leaning with her head against the wall, her hair has been unevenly shaved and she is completely wasted away. The reason for attending is unclear, the patient, her mother and her brother each tell slightly different stories. Backstreet abortion, bleeding, pain, headache, fever, fetus crawling out and crawling back in… but there’s other cause for concern. She gives recent history of attending funerals and has bloody diarrhoea, tinnitus and hiccups - all signs of Ebola. Then something strange, she’s from the same town as the other lady I admitted with bleeding and fever earlier. Shit.

Luckily the Ebola team are around for a meeting and so were quickly on hand to investigate. The more questions asked, the more suspicious it began to sound. The lady from earlier was resuscitated now and able to speak good English. She had also attended funerals and prepared the bodies, she reported seeing many people die in her village, “so many I stopped counting”, but couldn’t say from what. And so my first shift also brought the first two suspected Ebola cases to GRC.

"As I’m rehydrating I get a call to come to maternity, an ambulance has pulled up with a woman bleeding after giving birth to a stillborn outside the clinic"
Benjamin BlacKmsf obstetrician

The isolation unit was opened and space suits put on. Explaining to and transferring the patients was a challenge in itself. Three of us dressed up in the characteristic plastic yellow onesies, headcovering, goggles, double facemask and wellington boots. The heat inside this gear is incredible, within minutes I could feel the sweat dribbling down all my limbs, and it was very claustrophobic.

We made our way to the labour room, thankfully by this time the sun has gone down, once there we placed the lady miscarrying on a stretcher and carried her to the ambulance. With every minute the atmosphere inside the onsie turns-up another notch in heat and humidity. We push the stretcher in… push again… it’s not moving. Bollocks. The stretcher is too long for the isolation ambulance. So, loaded on the metal stretcher, the three of us carry the patient round the hospital in our onesies to the isolation unit. We stopped occasionally to breathe a bit, I was expecting anyone of us to faint at anytime.

Finally we carry her into the isolation unit and get her comfortable. We are then each sprayed with chlorine, and systematically take each layer of protective gear off. This is the worst part! I just wanted to get it all off as quickly as possible, but each bit needs to be decontaminated. Once the patients had been removed the labour room was closed for a deep clean and decontamination.

As I’m rehydrating I get a call to come to maternity, an ambulance has pulled up with a woman bleeding after giving birth to a stillborn outside the clinic. This was her tenth or eleventh birth, though she had only four living children (not an uncommon story here). The membranes had ruptured early in labour so possibly there could have been some infection prior to delivery. I poked my head in the ambulance and took a quick look, it was clear that the woman was having a massive postpartum haemorrhage. The problem was our labour room was now closed so I had to find another way to examine the lady.

Listen to Benjamin discuss this blog post on Everyday Emergency, the MSF podcast

There is an emergency obstetric room behind the labour room (for exactly this scenario) which has never been used. But first we had to find a way to get the ambulance there, there is a system of open drains around the hospital grounds which are not easy to navigate let alone in the dark. Once we got her to the room I quickly began to work on her with the midwives. The lady was already shocked with very low blood pressure, we began squeezing fluid into her. The uterus felt very relaxed and was the likely cause of bleeding so I began to try and rub a contraction, this briefly worked but then she started haemorrhaging again.

The blood loss was torrential, flowing off the bed and onto the floor. I was aware that the blood on the floor wasn’t clotting, just remained watery - a bad sign. The lady had already received some medicine to try and contract the uterus at the clinic where she had delivered, I gave some more. In fact I gave her all the different drugs we had, but still she bled. I explored her womb to see if there were bits of placenta inside causing her to bleed, and managed to retrieve some very small pieces, but otherwise it was empty. I rubbed and squeezed the uterus with both hands, each time it would contract and then relax, with another gush of watery blood. I knew that if the bleeding didn’t stop soon she would die. We had to get her to an operating theatre.

The ambulance that brought her had left as soon as she was out, so we were stuck in the middle of the night away from the labour ward (still closed) with this woman bleeding to death in front of us. In the end the midwives and I loaded her onto a stretcher and ran with her to the operating theatre. This all took time, which I knew was a luxury I could not afford. Thoughts were running through my mind - what can I do to stop the bleeding. I considered putting a pressure balloon inside the uterus, or tying a large suture around it to see if these would arrest the bleeding but it was clear by the time she got to theatre the window of opportunity had gone.

The woman was now unstable and bleeding to death, her heart was beating at 180 per minute, it would not be able to maintain her for much longer. I knew I would need to remove the uterus altogether.

Where I come from an emergency hysterectomy for postpartum haemorrhage is a rare thing. There is blood and clotting products in the bank, and interventions available to avoid such extreme measures. If a hysterectomy was contemplated the most senior gynaecologists (two at least) would be called in to perform the surgery, and a consultant anaesthetist too. After surgery the woman would almost certainly go to ITU, for close monitoring and stabilisation. In Sierra Leone that night there was me, a theatre nurse and an anaesthetic nurse.

The anaesthetic nurse began inducing her with ketamine, and told me “doctor, she doesn’t have long, be fast”. I could not believe this was my first shift, on my first mission. The first time the theatre staff would see me operate and I was performing a peripartum hysterectomy on a woman in extremis. I made a midline incision, buried my hand into her pelvis and brought out her floppy and relaxed uterus. After birth the womb should be solid and hard.

Deep breath. “Clamp please”, here we go. As I clamped, cut and tied I kept thinking that I was going to drown in the pressure, but the theatre staff were amazing. They kept calm and focussed, and when I paused to think the nurse would gently pass me the next clamp or suggest a place to tie. I felt down for her ureters, I could feel the one on the right, but wasn’t sure about the left. There are dyes which can be injected to help identify the ureters or damage to them but none were available in this theatre.

I stopped, looked, felt. Stopped again. In the end I had to make a decision; the womb had to come out. After I had amputated the womb from her body I looked down into the pelvis, every edge was oozing. This was not surprising I knew from when she arrived that she had probably already consumed most of her clotting factors during the bleed. So I began suturing edges together, putting pressure packs and then removing them. Eventually the pelvis was dry. I washed it out, checked again and then closed.

Operating in the full protective gear was exhausting, small pools of sweat had collected in the base of my goggles. Towards the end of surgery it was clear that the patient had not produced any urine for a while - had I stopped her from dying by removing her uterus only to kill her by removing her ureters? The anaesthetic nurse gave a drug to try and increase the urine output, it worked. There is no ITU, the patient returned to the ward and was put to rest on her bed. We managed to get two units of blood for her (one of which had malaria so started treatment for that), she was weak and pale, but alive.

The two isolated patients turned out to be negative for Ebola, though one died whilst waiting for the results. The lady who had a hysterectomy, after an initially rocky post-operative period, now continues to make excellent progress and I’m hopeful she will be going home soon.

Quite an initiation to obstetrics at GRC. Balancing the care of obstetric patients against screening and protecting ourselves from Ebola & Lassa will continue to be a challenge, but this is the current context in which we are working.