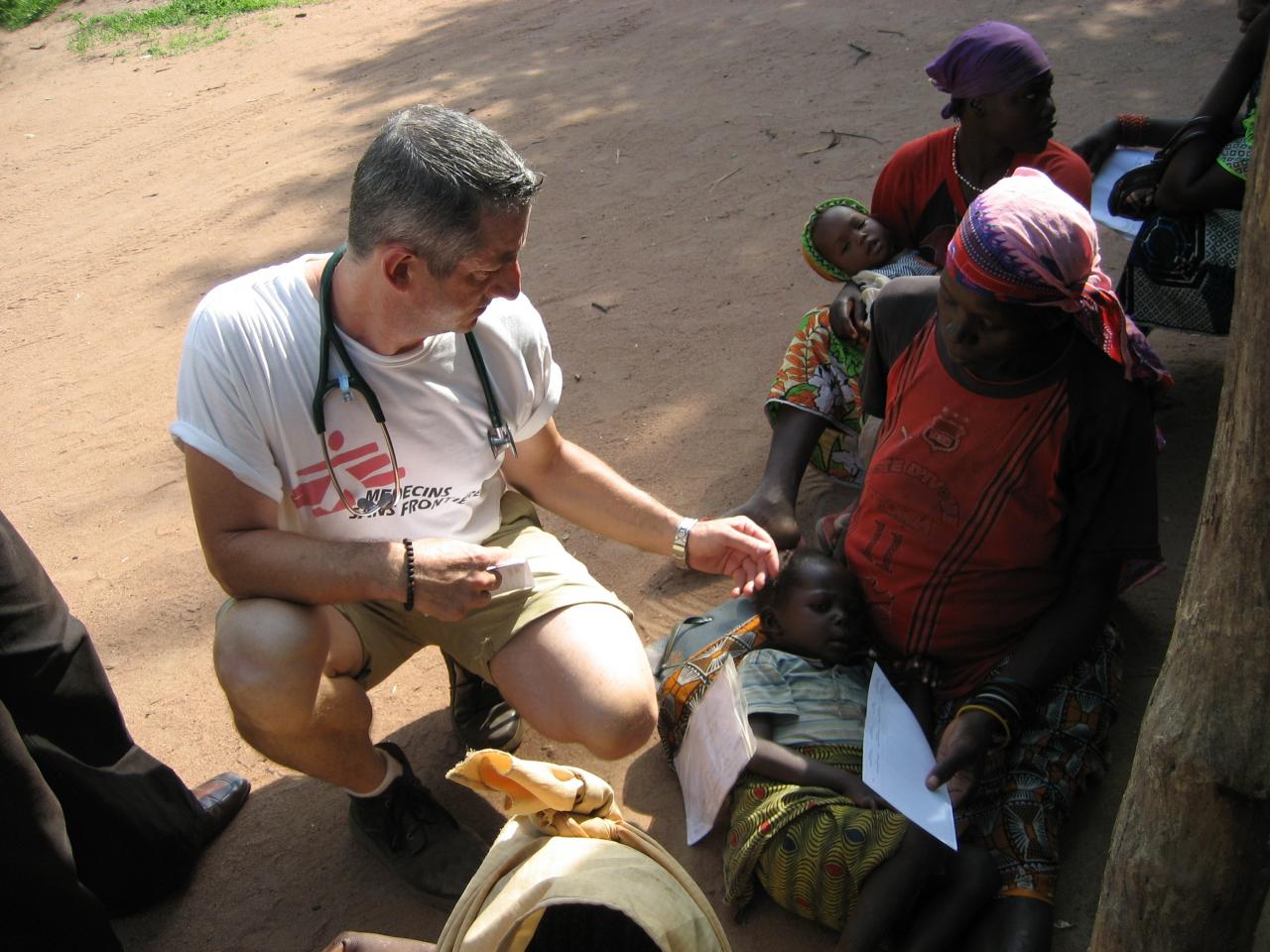 Médecins sans Frontierès has spent four decades bringing proper medical care to the most far-flung parts of the globe - and for its Irish volunteers, the work is not merely a job, but a calling to help others.

Most of us experience new cultures and foreign landscapes from the comfort of a sun lounger and the safety of a hotel room.

Some people, however, are driven to the far corners of the world by a desire to help improve the lives of those less fortunate.

The people who volunteer with the non-profit humanitarian aid group Médecins Sans Frontiéres provide medical care to people in need, in regions that are often dangerous or unstable.

This year marks the 40th anniversary of the founding of MSF, which was set up by a group of doctors and journalists to provide medical aid wherever needed, no matter what the geopolitical boundaries. With offices in 27 countries, it is today a global organisation.

The Irish branch of MSF opened in 2006 and, in the last five years, has sent volunteers on more than 100 missions. Irish volunteers have travelled to Haiti in the wake of its earthquake, and to Pakistan after it was hit by severe flooding.

They have also joined ongoing projects in the Democratic Republic of Congo, Sudan and Myanmar, as well as working in places that don’t often make the headlines, such as Chad, Niger and Yemen.

Among them is Dr Maeve Lalor, 31, an epidemiologist from Dublin who worked at the London School of Hygiene and Tropical Medicine prior to joining MSF.

As a specialist studying disease frequency and distribution across human populations, she had been dividing her time between England and Malawi, studying the BCG tuberculosis vaccinés effectiveness (or lack thereof) on different populations. Once back in Ireland, Lalor got itchy feet.

While she doesn’t describe herself as naturally adventurous, her friends and family would certainly have disagreed when she announced she was taking a job heading an epidemiology team in Uzbekistan in Central Asia.

She is currently nine months into her first year-long mission with MSF, and is based in Karakalpakstan, an autonomous republic within Uzbekistan.

Here, she works with a medical team to study the region’s current multi-drug resistant tuberculosis (MDR-TB) epidemic. Uzbekistan has one of the highest rates of tuberculosis in the World Health Organization’s European region.

‘‘What is of greatest concern [in Karakalpakstan] is the rate of MDR-TB, which is tuberculosis that is resistant to the strongest TB drugs available," says Lalor.

She blames outdated diagnostic and treatment methods inherited from the Soviet years, as well as the sale of unregulated medication in pharmacies, as major contributors to the problem.

Having arrived in the desert city of Nukus in August 2010, Lalor had little time to dwell on culture shock as she dived headfirst into her management role on one of the largest and longest-running MDR-TB projects operated by MSF.

The goal is to provide comprehensive TB care throughout Karakalpakstan and, ultimately, to hand over the responsibility of treatment to the local Ministry of Health.

She documents her experience through a blog on the MSF Ireland website, in which she details her experience with local Karakalpakstani customs, the bone-chilling temperatures in winter and her attempts to learn the Russian language. She also airs her frustrations with the slow pace of progress.

She describes the common mistake of ‘‘first missioners’’ such as herself, who arrive on their first assignments wanting ‘‘to do it all at oncé’. It takes some adjusting before volunteers can accept that things won’t be changed overnight, and that the work of MSF is ongoing.

Lalor sees her current assignment with MSF as just the start of her overseas aid work. ‘‘I enjoy the challenge, and I enjoy meeting and working with people from different parts of the world," she says. ‘‘I think I am bound into working in the international medical field for life."

For Conor Prenderville, 29, joining MSF was the realisation of a lifelong goal that didn’t always seem possible without a medical background.

With qualifications in business and management, Prenderville worked in the building sector for several years before leaving it all behind to travel the world. Having returned to Dublin to find the construction industry in tatters, Prenderville did the same as many in his position - he signed on the dole and re-examined his future.

While walking home through the grounds of Trinity College, he spotted a leaflet for an MSF information meeting that was starting in five minutes.

Having harboured a dream to do development and aid work for years, he decided to drop in to the meeting, even though he was convinced that MSF would only be looking for doctors.

Six months later, he was departing on his first mission to Chad.

Over the course of a year, Prenderville worked as a supply logistician in the central African country, which entailed sourcing the necessary drugs from worldwide suppliers and getting them to the mobile clinics operating in the Chadian outback.

‘‘We had a lot of emergencies," he says. ‘‘They were mainly problems of malnutrition, but also some cholera. The mission grew from one to eight projects in the time that I was there, so we saw a lot of turbulence."

From Chad, he travelled to the Haitian capital of Port-au-Prince for two months to work with a team dealing with a cholera outbreak. Recently, Prenderville embarked on his third mission, this time in Colombia, where he is part of a team providing free primary and mental healthcare in regions affected by local violence.

One week into the assignment, Prenderville is enthusiastic to get stuck into the task of bringing mobile clinics to towns in the Bolívar region of the country, where various armed groups are active and people are often isolated for fear of the fighting.

Here, the team will treat thousands of patients for everything from chronic respiratory illnesses to skin disorders. Again, his skills in supply management - keeping stock of everything from bars of soap to vaccines - are crucial to the success of the mission.

‘‘The benefits that you can bring to people are so real," he says. ‘‘At the end of the day, I know that our teams save lives every day - many, many lives."

John B Fiddler’s road to joining MSF has been a longer one.

During the 1980s he moved to New York City where he worked as a bartender and witnessed first-hand the devastating effect of HIV/Aids.

‘‘I saw a lot of young people getting sick and dying of Aids. I had close friends who died, still in their 20s," he says. ‘‘After going to demonstrations and working with activist groups I realised that possibly I could be more useful if I became a nurse."

At the age of 34, Fiddler began studying for a nursing degree at City University of New York, and went on to work as an ICU nurse and a palliative care nurse practitioner. In 2005, he joined MSF and set out on his first mission to Burundi in central Africa.

What attracted Fiddler to overseas Aid work was the chance to become ‘‘one visible part of a process that so many people are a part of’’ in helping to provide medical care to those who would otherwise go without.

‘‘I also love the fact that we usually don’t go where ‘normal’ people go - that’s the rebel part right there," he says. He describes himself as a ‘‘rebel with a cause. I am privileged to see places few people will ever seé’.

In Burundi, Fiddler spent nine months working with malaria and sexual violence patients, and conducting HIV testing. He set out on his second mission in 2007, spending six months in Chad working at a small primary care centre.

His third mission brought him to the Central African Republic to supervise testing for sleeping sickness (human African trypanosomiasis) in the country’s north-west region.

He is currently on his fourth mission, also in the Central African Republic, where he is supervising an outreach team providing basic medical care to isolated communities.

Balancing life in New York City and frequent visits home to Ireland with his work with MSF isn’t easy.

Although initially concerned for his safety, Fiddler says his partner, friends and family have come to accept his work and are proud of what he does.

He plans to settle in New York after completion of his current mission, to continue his nursing work and to study for an education degree.

But the pull of the MSF experience appears hard to resist. ‘‘The field work becomes very enticing when you are set in a routine job at home," he explains. ‘‘Suddenly, the grass over there looks greener again."

Information on the work of Médecins Sans Frontiéres, as well as details on how to apply to be a volunteer, can be found at www.msf.ie.

As well as doctors and nurses, the group is seeking pharmacists, financial controllers, human resource specialists and administrators, among others. Volunteers should have at least two years of experience post-qualification, and a familiarity with travelling off the beaten path. Some degree of proficiency in a foreign language is helpful

This story appeared in the printed version of the Sunday Business Post Sunday, May 29, 2011