Gaza, One year after the bloodbath

On 14 May 2018, the Israeli army shot more than 1,300 Palestinians, killing 60 of them, during the weekly protests by the fence between Gaza and Israel. A year later, many of those injured are still struggling with the devastating consequences of their wounds. Their hopes to find adequate treatments fading, people are stuck in painful limbo while the effects of their injuries take an ever greater toll on them and their loved ones.

In a Médecins Sans Frontières/ Doctors Without Borders (MSF) clinic in Gaza, the Singaporean anaesthetist was using an Arabic vocabulary unusual for a foreigner: “electricity, knife, burning, tingling?” The patient, Murad, 26, gestured towards his left leg, encased in a metal cage, to show the doctor where the different sensations erupted. Electricity and stabbing pains were worst just above his foot, discoloured and cold to the touch, the veins constricted after a year of pain. “The injury has destroyed me,” he said. “I was going out to work before, repairing satellite dishes, but now I can’t, and no one has reached out to help me.”

Murad was one of more than 1,300 people shot with live ammunition by the Israeli army on the bloodiest day of protests along the fence that separates Israel from Gaza on 14 May 2018. 60 people were killed on that day. It was a bloodbath with hospitals throughout Gaza overwhelmed by an incredible number of wounded. A year on and many are still suffering: legs missing too much bone to heal, infections setting in, the uncertainty and pain overwhelming. 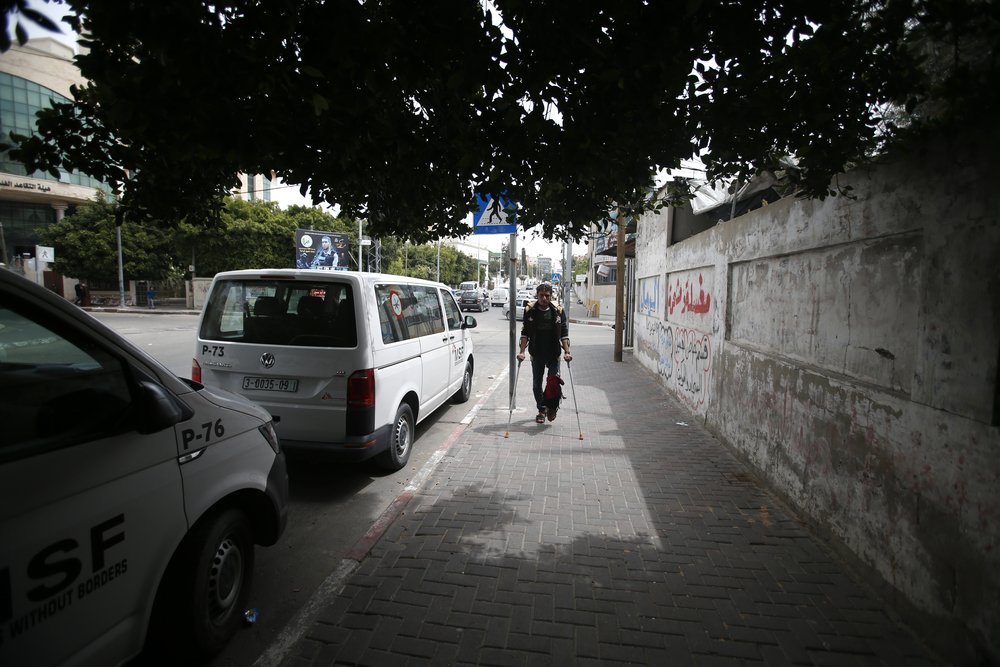 Ahmed, 38, explained why he went to the protest on 14 May in which he was injured. “I went peacefully, as a citizen. I’m from Bir al-Saba [Beersheva] originally. Since 2000 there have been three wars, all of Gaza under fire, 13 years of the blockade, two separate states in the West Bank and Gaza. We are oppressed.” A farmer from the far south of the Strip, he took great delight in describing the animals he looked after, the plants he grew, the yoghurt and cheese he made – all impossible now, with a leg still missing three centimetres of bone even after multiple operations. “I just want to sleep, to take medication, that’s all I can do.”

Gaza’s economy has been brought to the brink of collapse by the Israeli blockade, Palestinian political infighting and Egyptian restrictions on movement. People stuck here have watched as their means of making a living have disappeared. The injuries suffered by thousands of people – more than 7,000 people have been injured by live bullets the Israeli army since 30 March 2018 – have only made things worse. 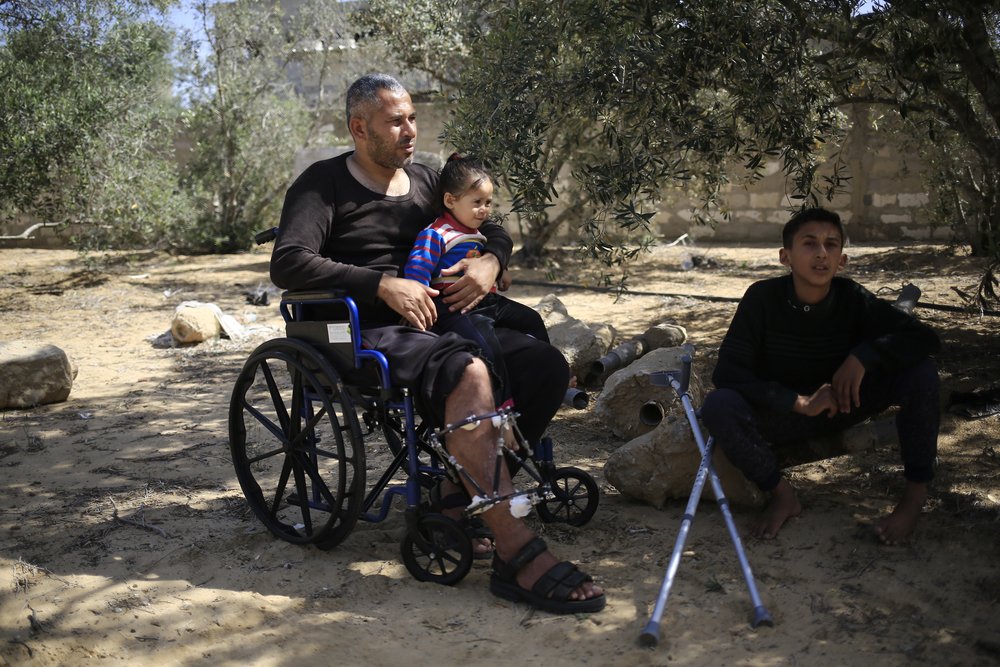 Mohammed ABED
Ahmed, 38, a Palestinian shot and wounded by the Israeli army on 14 May 2018, stands in the orchards on his farm in Rafah, in the south of the Gaza Strip, with his children, May 2019.

Murad has lost the ability to make a living, he said. “I taught myself how to fix things, satellite dishes, TVs. I could make 15-20 NIS ($4-5.50) a day. Since my injury I’m just sat at home. I live with my mother, my father left her and we get no help from our family.” He began to cry as he described how they had not been able to afford gas for their one-room house for a month and how they had been reduced to taking on debt just to buy biscuits and bread. “You see who your friends are in hard times,” he said. “Now I see have none.”

The Gazan health system – crippled by the same things that have brought the economy to its knees – has been overwhelmed by the injuries. Thousands of similar wounds, all needing complex and lengthy programs of treatment, have placed impossibly high demands of the Ministry of Health and the few other organisations providing healthcare in the blockaded strip. Many patients are still waiting for solutions that might not come.

“To treat people in the protests we have opened two hospital wards, increased to five the number of clinics we run and added to our surgical capacity. However, even with all we are doing we simply lack the number of beds and expert surgeons and antibiotic specialists needed to properly treat these injuries,” Marie-Elisabeth Ingres, the MSF Head of Mission in Palestine, said. 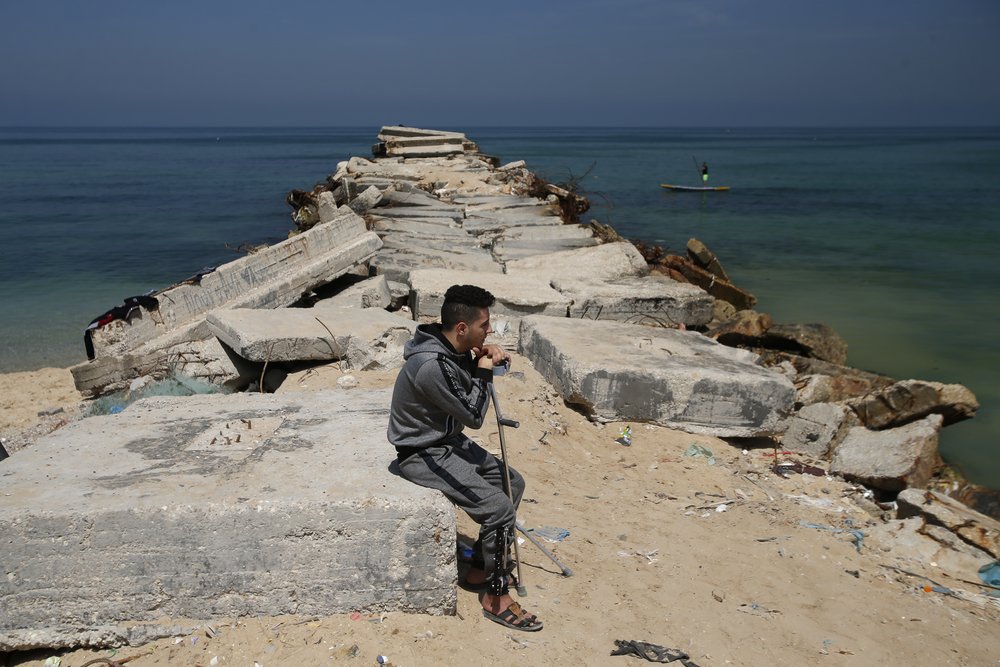 Iyad, 23, a musician, was shot but is one of the lucky few who have managed to travel out of Gaza to receive treatment. At an MSF hospital in Amman that specialises in reconstructive surgery for war wounded from across the Middle East, he had orthopaedic surgery and treatment for a vicious infection in his bone that required four weeks of antibiotics in an isolation room.

Still, a year after he was shot, uncertainty lingers. “All my thoughts have become about my injury. When will I be able to walk? Will I be able to walk again?” Iyad needs another round of operations in Amman six months from now, and after that a long period of rehabilitation before he will – hopefully – walk again.

The burden of caring for the injured – who are overwhelmingly men – has fallen mostly on their wives and mothers. “My wife is tired too,” says Ahmed, the farmer. “She keeps asking when I will be better. She wants to live a normal life of course, she’s human. She said she wants to go back to her family, but I need her for so many things.” He described the pure frustration of being unable to wear trousers, to go shopping, to lift up his children for fear of the pain. “If there wasn’t the internet, you would die,” he said of his year of boredom. “Facebook, Twitter, YouTube, they let you see another world.”

Murad was trying to maintain his spirits, despite the poverty and pain into which his injury has plunged him. “I know that my leg might be amputated, but despite that I continue trying to get it treated. I refused to travel at first, but now I hope to, to wherever will take me.” His ambition for when he gets better: to open a stand that sells tea and coffee.

Ahmed, however, was finding it harder to think positively. The long months of suffering have taken their toll. “I wish that my leg had been cut off,” he said, “so that at least now I wouldn’t have any pain.” A year on from his injury, no one can tell him when that pain might end.