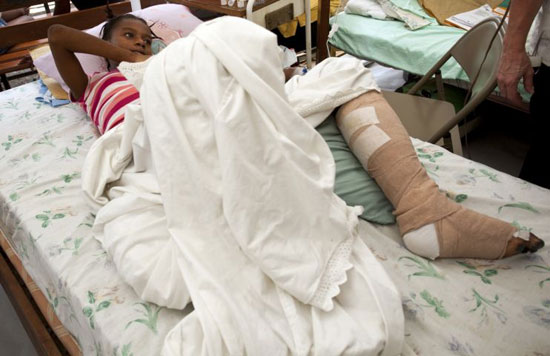 Haiti: Rebuilding lives, one by one, day by day...

“I came back from school, did my homework and at just before 5.00 o’clock I sat in front of the TV to watch the day’s episode of Frijolito when the walls fell on us killing my mother and my three sisters,” remembers tearful Jean-Rosemay, who is barely 14. This was the last day of her life as she knew it but only the first of the two she spent under her family’s destroyed house in Jacmel, in the South of the country.

Jean-Rosemay’s legs were crushed under the rubble and, since her rescue, she has been treated by an MSF team of surgeons and doctors in Jacmel hospital.

The intensive care ward, like the rest of the hospital, fell victim to the violence of the earthquake and is now located in one of several big tents in the hospital courtyard. The two rows of beds are filled with survivors of all ages. Some have had arms or legs amputated, others are recovering from broken bones and some, like Jean Rosemay, are fighting not to lose a limb.

Jean-Rosemay in Saint Michel hospital in Jacmel. Stuck in the rubble for two days, she is now fighting to keep her leg. February 2010

Every couple of days she is brought on a stretcher to the operating theatre for in-depth wound cleaning and re-dressing. This regular ritual is a struggle against further infection and in fact part of the bigger struggle to save her leg. The treatment is painful as surgeons need to clean the wound deep into the muscle. Even though she is under anaesthesia, she sings every time she is in the operating theatre. It is her way of relieving stress.

“I am amazed by Jean-Rosemay’s strength and resilience” says Nicole Dennis, an MSF nurse. “In fact, this determination is shared by most patients on this ward. They have been through so much but have a great attitude. I saw a 30-year old man who had been amputated from his right arm and when he woke up, he was at a complete loss. The following morning he told me ‘I’m going to make it’.”

Patients seem to gain strength from each other. Some of them may find motivation in the youngest patient of the ward. Claudia is a two-and-a-half-year old girl orphaned by the earthquake and who had her right leg amputated below the knee. She’s adamant that she will walk again and keeps trying. When she is sitting on her bed, she covers her amputated leg with a blanket, as if it was a temporary inconvenience she wants to hide.

But resilience has its limits and tears start flowing when survivors recount the moment that changed their lives forever. Coming to terms with heavy injuries, the loss of loved ones and the loss of pretty much everything else is a gigantic challenge. Not knowing what will happen next makes it even harder.

Mental health professionals are about to start their work with trauma patients in the hospital. This support will be crucial in helping people cope with the shock the disaster caused, the loss of family members and, in some cases, a new disability.

Odette Gedeon is a 56 year old woman who lost her arm in the Haiti earthquake. She is receiving treatment at Saint Michel hospital in Jacmel.

A few beds further, Odette, 56, has had her arm amputated to the shoulder. The MSF surgeons have now grafted a piece of skin of her thigh to cover the stump. As if the psychological and physical pain of the experience were not hard enough to take, she faces the tough prospect of life after hospital. When she is fit enough to be released, she will have to adapt to a life with only one arm in an unfamiliar place - a tent, the street, who knows?

Leaving hospital is usually a moment of celebration, but in Haiti today, it often means going back to no-one, to nowhere and with a tremendous psychological trauma. It means living on the street or in a camp and struggling to get even the most basic things like water, soap and food, not to mention proper shelter. Leaving hospital means everything but going home.

Medecins sans Frontieres teams are working hard to provide essential support to families who have lost everything in the earthquake. In Jacmel alone, MSF distributed hygiene and cooking kits to about 1,800 families. A race against the clock has started as the rainy season is looming. Much more needs to be done to provide shelter for people before April.

Nothing will give Odette her arm back, nothing will give Jean Rosemay her sisters and mother back, but the lives of the survivors can be rebuilt. Physical and mental recovery may take a long time for many Haitians, but as Nicole says “one day at a time, it will all come together.”