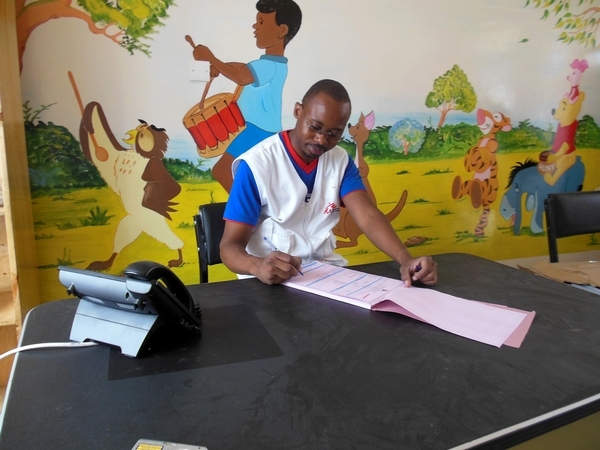 Kenya: Between rubbish, violence, and hope

When I came to Kibera for the first time I felt humbled by what I saw. It was hard for me to imagine that it was possible to live in such conditions: in Kibera, an estimated 250,000 people live on a five-square-kilometer patch of land.

They live in very small houses made of mud or iron sheeting. Dust and smoke, stench, sewage, waste, and water shortages are common and leave their mark on people’s everyday lives. There are not enough latrines, and if you want to use a toilet, you have to pay five shillings. Some families cannot afford this, and as a result use plastic bags, which in turn are thrown along the narrow paths of the slum.

Back then, HIV-positive people were stigmatized, and patients often were not brought to us until they were suffering from terminal AIDS and already dying. They had often been treated unsuccessfully by traditional healers. Due to late access to care these people often suffered from serious co-morbidities, such as Kaposi's sarcoma (a form of cancer that is often associated with  HIV/AIDS), cryptococcal meningitis, severe malnutrition, or extrapulmonary tuberculosis.

MSF was the only actor to offer free ARVs and treatment of coinfections. The major response to HIV/AIDS by authorities had not yet begun, and private hospitals demanded exorbitant sums for treatment.

In the following two years, we noticed that more and more HIV/AIDS patients also suffered from tuberculosis. Previously we had to transfer such patients to other hospitals, which, given the distance and the often inadequate treatment, was not the best solution. Therefore, we decided to integrate the treatment of tuberculosis into our program. Today tuberculosis treatment is included in consultations, in addition to examinations, medication, family planning, and psychosocial counseling.

Life in Kibera is very hard. Many teenagers spend their time working as touts for matatus, minibuses used for public transport in Nairobi. Others are involved in theft, robberies, and prostitution. Alcohol and drug abuse are common.

Teenagers caught in robberies are often lynched by mobs. In one of the latest of these incidents, five young men who were accused of a series of robberies were severely beaten and left to die. We tried to provide medical care to them, but it was a very delicate situation. The mob of approximately 200 people and the police refused to let the boys be treated. Many of them were surprised that we wanted to rescue them. Of course, we did not give up until we were allowed access to the injured. After emergency treatment, we were able to refer them to a hospital.

Later, we were approached by a gang member who thanked us for our help and promised to tell his network about it. This helps to further increase our acceptance in Kibera, which is very important, especially in crisis situations when we urgently need access to the population.

Our acceptance in Kibera will be especially important in the upcoming elections. In 2008 Kenya witnessed post-election riots and violence, with more than 1,000 fatalities and half a million displaced people. Kibera was heavily affected: Certain ethnic groups were driven from the slum by other groups. All other health facilities were closed, but MSF decided to stay and treat the wounded and continue to provide our patients with medications. We also distributed relief items and set up a makeshift clinic outside the slums for the displaced people.

In such situations it becomes clear how important it is to be independent and impartial and to be accepted by all groups. I have really come to appreciate MSF, because the organization really adapts its work to the needs of the beneficiaries.

Our concept is so successful—and necessary—that in addition to the slum population, we see patients from other neighborhoods of Nairobi, and even from other parts of Kenya. This is a new challenge for us, because it is important to maintain the high quality of care. Therefore, we are now taking measures to ensure that patient flow is optimized. We are now also supported by the Kenyan Ministry of Health, which is contributing personnel and equipment.

Our methods might evolve but the aim remains the same: to continue ensuring free access to essential medical care for the people in Kibera.