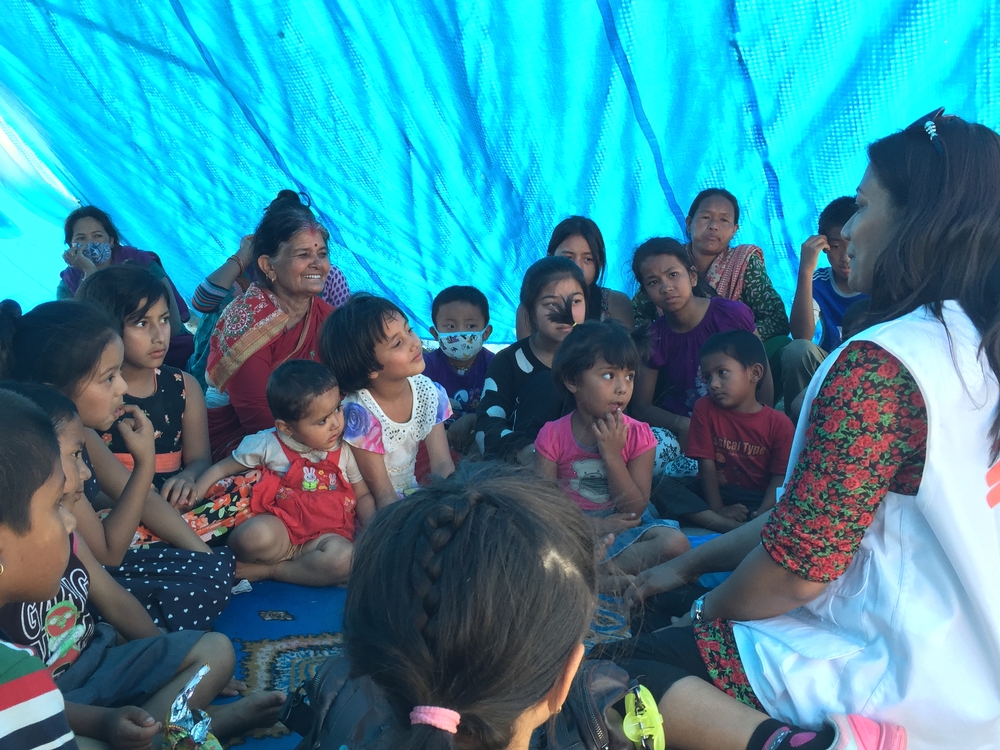 Nepal: 'We have lost, but we will rebuild’

In the first earthquake that hit Nepal on 25 April, people lost their loved ones, their homes and their belongings. Despite the massive destruction, they had no choice but to pick up the pieces and rebuild their lives. But just as they were getting started, the second earthquake hit.

Half-reconstructed buildings came crashing down. People were filled with uncertainty and confusion about how to start over again, and by the fear of another quake.

High in the mountains of northwestern and eastern Nepal, teams from Médecins Sans Frontières/Doctors Without Borders (MSF) are running mental health activities to people affected by the two devastating earthquakes.

MSF psychologist Kamini Deshmukh explains that one of the main activities she does is ‘psychological first aid’.

Its aim, she says, is to enhance people’s coping mechanisms in the face of the trauma they have experienced, and to help them deal with their fears and anxieties. Kamini also conducts group sessions for men, women and children that are tailored to their specific needs.

“I try to present the reality of what has happened in a very transparent and honest manner,” says Kamini. “That makes it easier for people to cope with the current situation. Slowly they will accept the reality and will be able to move on with their lives.”

Children draw during a psycho-education session in Nampha in Sindupalchowk district.

After the first earthquake, many people had started to rebuild their houses, only to see them destroyed by the second earthquake. Houses with small cracks now have bigger cracks and people are scared to live in them.

Some people have left their villages for fear of another quake. For many people, says Kamini, it may take some time to start the healing process.

“With the children, I start with the basics, explaining what an earthquake is,” says Kamini. “I encourage them to tell me what they are experiencing and I conduct activities like singing and drawing. From their drawings, I can tell what they are going through and I am able to provide advice.”

Most communities have their own coping mechanisms. Some get together for social activities together such as singing and dancing. Others share their experiences with relatives and friends.

Yet others go and stay in a different village where they feel safer. “With psycho-education, I try as much as possible to enhance these natural coping mechanisms, which are all ways to help our minds deal with such experiences,” says Kamini.

In Kathmandu, an MSF mental health team is conducting group sessions in Chuchepati camp, which provides shelter for people whose homes were destroyed or are no longer safe to live in, as well as people who are too fearful to return home.

Kumari Dhakal, an 85-year-old widow and mother of two, has survived three major earthquakes: one in 1934, and the two in April and May this year. The cracks in the walls of her rented house, and the fear of another quake, led Kumari and her daughter to seek shelter in the camp.

Recounting what she went through in the three quakes, one can hear the emotion in her voice. Her knee is painful, she finds it hard to sit upright, and her hearing and eyesight are poor.

Kumari would be far more comfortable resting in her bed at home, rather than on an uncomfortable mat in a makeshift tent shared with three other families.

Kumari and her daughter have clean water to drink after MSF installed water tanks in the camp, but they are struggling to get enough to eat.

“The main problem we have now is food – we have no rice or dhal,” says Kumari. “We live on what we can get, as we can’t return to our house in case it collapses on us. We live each day in fear.”

Living in fear of another earthquake

Beyond Chichepati camp, tents and plastic shelters have been erected across the city. The people living in them have suffered two natural disasters in less than three weeks, yet they also have to cope with normal life events like sickness and bereavement.

“I have lost everything, my friend,” says Basu Biru. “I used to have a home in Sindupalchowk, now I have nothing. And now my father, who was sick, has just passed away. I do not think the traditional 13 days of mourning will be enough, as the pain I feel inside is so great.”

Most people in Nepal have been affected, in one way or another, by the two earthquakes. Many live in fear of another major earthquake or landslide bringing yet more devastation.

Countless numbers do not know how they will satisfy their basic needs for food or shelter. Yet despite all of this, there is a remarkable sense of resilience, says MSF psychologist, Renata Bernis.

A psycho-education session in Kathmandu.

“Moving from place to place in Gorkha district, I was humbled,” says Renata. “I visited villages that were completely destroyed, and I felt devastated on their behalf.

But they positively shocked me when they told me, ‘We have lost, but we will rebuild’. I’m confident that with this attitude, they will cope; they will rebuild. These are people, not victims.

They are people who have been hit hard by a natural disaster over which they had no control, and they are just trying to live each day as it comes.”

Since April 25, MSF psychologists and mental health workers have conducted group counselling sessions for least 3200 people. The sessions are meant to normalise stress by encouraging positive coping mechanisms in managing reactions and feelings related to the earthquakes.

These sessions create space for people to share their feelings and fears, and share tips on how to protect themselves and their families. Thus, the sessions help restore the people’s sense of ‘being in control of the situation.’

Find out more about MSF's emergency response in Nepal