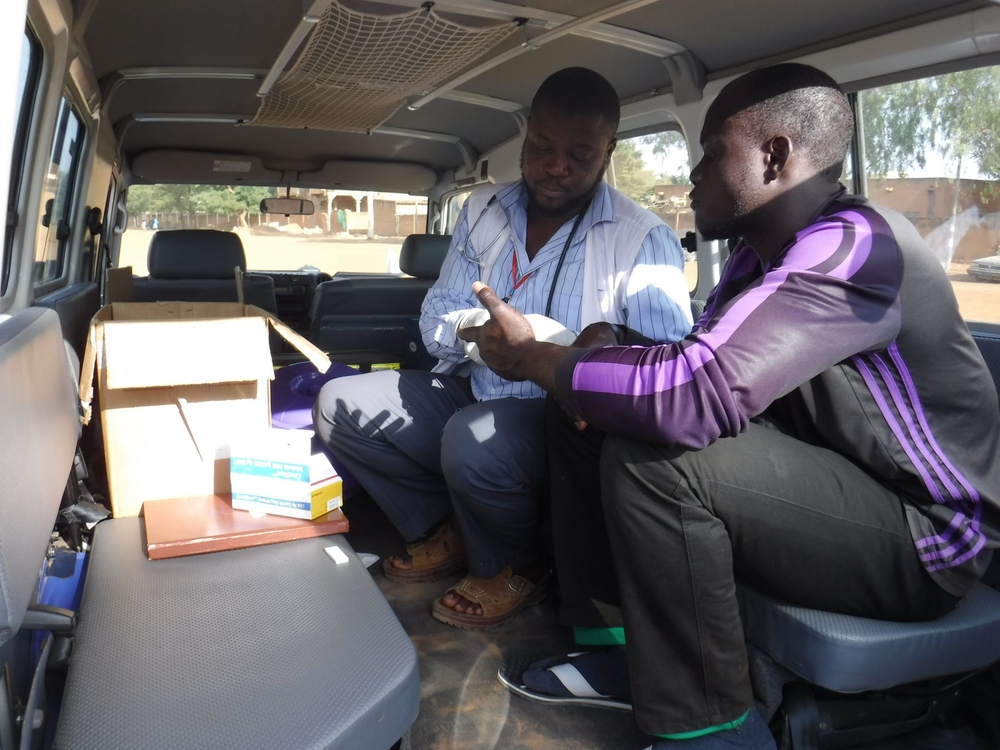 Niger: MSF clinic in Niamey provides medical care to people on the move

Thousands of people expelled from Algeria, returned from Libya or journeying north, including to Europe, find themselves in Niger, a hub of migration in Africa. They face barriers, exclusion and abuse that resulted from the European Union-supported migration management system in the region. Médecins Sans Frontières (MSF) provides them with medical care in Niamey, a staging point at the crossroads of several routes.

Illnesses brought on by conditions on the road

Every day, MSF’s mobile clinic team does the rounds of Wadata, a neighbourhood of Niger’s capital known for its many bus terminals and hostels passed through by migrants. Medical treatment is provided to anyone on the road, regardless of administrative status or where they plan to go. “Consultations are given in the mobile clinic. Patients requiring further medical follow-up are referred to our centre that has an observation room with several beds. We also work with Ministry of Health facilities where we refer more urgent and complex cases,” explains Haïg Nigolian, a physician who has spent months working in this project.

Between May and November 2018, MSF staff carried out about 4,500 consultations. Most patients come from West Africa, they criss-cross the continent. What the teams see most frequently are illnesses brought on by the conditions people face on the road, such as generalised pain, gastric disorders and respiratory infections. Some patients bearing marks of torture tell of the abuse they’ve been subjected to.

Some health issues deteriorate when they’re not treated quickly enough and can lead to serious and potentially life-threatening complications. That’s what happened to Marc. After a year spent in hellish conditions in Libya where he said he was thrown in prison several times, the 26-year old managed to get to Agadez. Extremely sick, he then decided to take the bus to Senegal. While changing buses in Niamey, the bus company refused to allow him to board due to his health and contacted MSF’s mobile team. “He was put under observation in our medical centre while we did some tests,” recalls Nigolian. The diagnosis was dire—advanced hepatitis B with liver cirrhosis and cancer. We did what we could, but he died a few weeks later.” 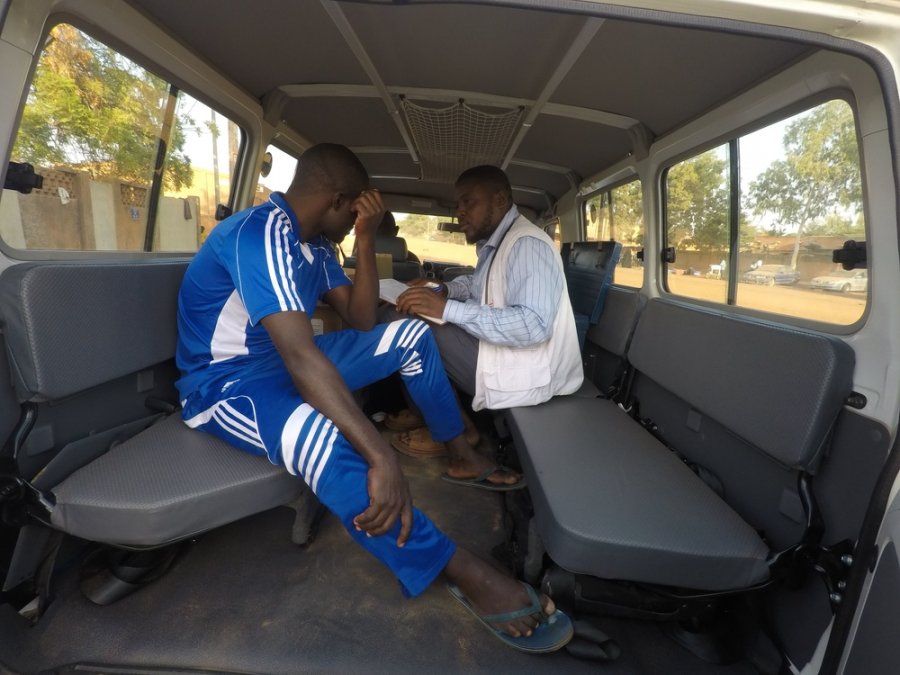 
Accounts of violence in Libya and Algeria

“Our project is intended mainly for people arriving broken and exhausted from Libya or Algeria,” explains MSF’s head of mission in Niger, Abdoul-Aziz O. Mohamed.

According to the International Organization for Migration’s (IOM) monitoring surveys conducted at border crossings, over 60,500 people entered Niger during the first 10 months of 2018. Some crossed over to Niger near the village of Assamaka. Deported by the Algerian authorities, they had been ordered to cross the border that was miles away and left to fend for themselves in the desert. “Assamaka often comes up in people’s accounts. They describe it as a particularly harrowing and psychologically damaging experience. Being dumped in the desert with no food or water and seeing people die on the road leaves people scarred,” adds Haïg Nigolian.

Some of those deported from Algeria stop off in Arlit and Agadez on their way to Niamey to recuperate and plan the next stage of their journeys. Here they meet people who have survived the nightmare of Libya where violence, extortion and abduction of Sub-Saharan migrants—either seeking to reach Europe or seasonal workers—, still thrive. 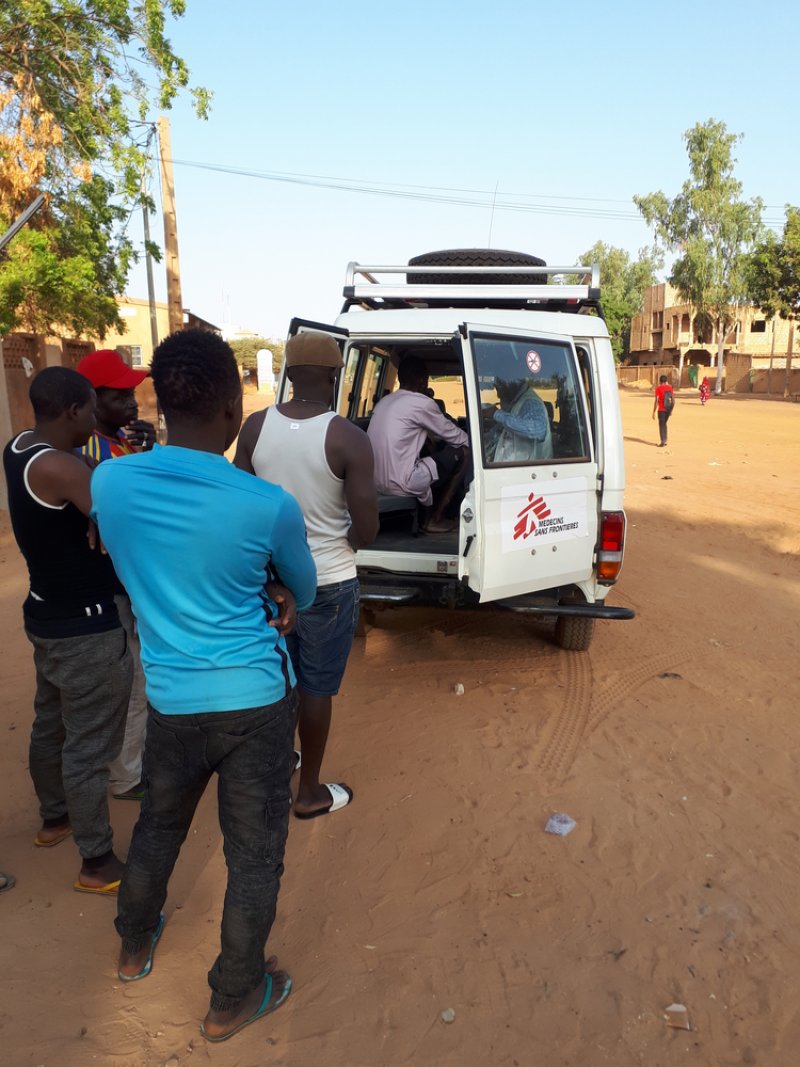 Return to country of origin a condition of assistance

“When they get to Niamey, people on the move have a hard time accessing adequate medical care. Too often, there are conditions imposed on the assistance available to them in Niger. Before getting any help, they have to renounce their plans to migrate—even when they’re motivated by situations of violence and danger—and willingly enrol in IOM’s program to return to their country of origin,” says Abdoul-Aziz O. Mohamed.

Makeshift camps are springing up around IOM transit centres now overwhelmed with the number of people prepared to go back. Migrants spend weeks waiting for the IOM to register them as voluntary returnees and it is only then they are able to get medical care from the organisation or its partners.

At a time when European countries are doing everything possible to reduce the number of asylum seekers, refugees and migrants arriving on their shores by sea, repatriation programmes are booming: over 10,000 people left from Niger during the first half of 2018. Even when this entails ignoring the requirement of international protection and treatment of the abuse inflicted on people during their journeys—journeys that, due to the shutting down of borders and criminalisation of migrants attempting to cross them, are becoming even longer and more complex.

MSF has been deployed in Niger since 1985. Working in cooperation with the health authorities, the organisation treats childhood illnesses and malnutrition and delivers reproductive health services. Since the end of 2014, MSF has also been providing support to the displaced, refugees and local population victims of the conflict in the Diffa region. Our teams also help with rapid response during epidemics and assist the health authorities with epidemiological surveillance.

our work with refugees and iDps >