Nine countries and 7,000km: Asad’s journey from Somalia to Europe

Asad is 20 years old and from Somalia. He was forced to flee his country because his life was in grave danger. He has crossed countries at war, several oceans and has covered thousands of kilometres to reach the safety of Europe. A Médecins Sans Frontières (MSF) team met him in the Spanish town of San Sebastian. Asad’s shocking story is typical of the ordeal faced by thousands of people who, their lives in danger, try to claim their right to asylum. 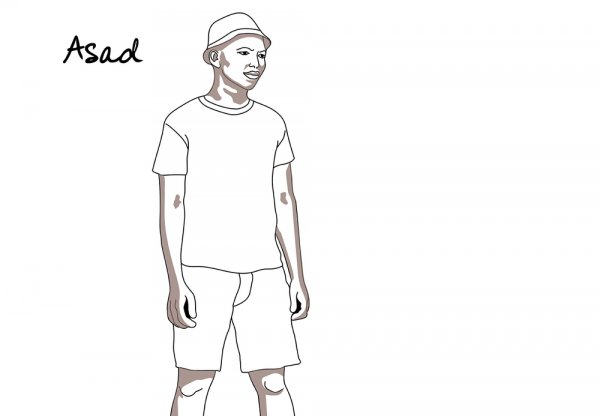 My name is Asad. I’m 20 and I come from Somalia. My story began a few years ago, at the beginning of 2015. I had a wife and a little boy, and I lived with my family in Jowhar in Somalia. I was a motorcycle taxi driver.

One day, some men threatened me and forced me to take them on my motorcycle taxi. I realised right away they were what people here call “terrorists”, but I had no choice. I had to give them a ride. We were on the road when I saw a police checkpoint. I was scared. I didn’t want the police to see me with those men, so I stopped the motorcycle and ran. The terrorists started shooting at me, the police returned fire and there was an exchange of gunfire. The terrorists were carrying explosives and they blew up my motorcycle.

The police arrested me. I told them exactly what had happened and they let me go. That was the start of my exodus. 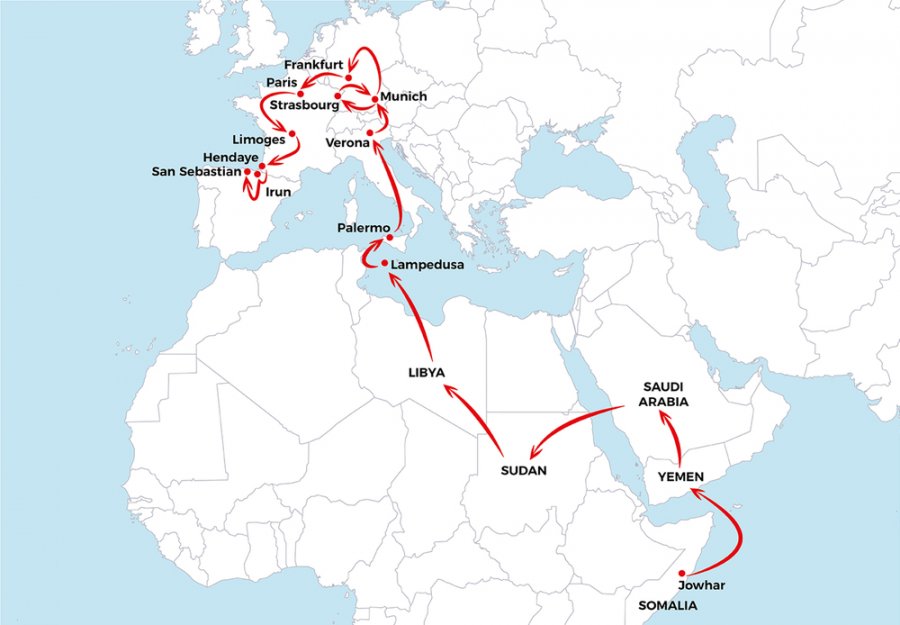 Asad's journey took him from Somalia, through nine countries and more than 7,000 kilometres, to France and Spain.

The terrorists were searching for me. The way they saw it, I’d betrayed them. I tried to hide but they found my family. They threatened my father and shot my mother because she defended him. I knew that sooner or later, they would find me and kill me. I had no choice. I had to leave Somalia. That was 15 March, 2015.

I contacted some people I knew to get them to take me on a small boat to Yemen. After spending 70 days there, I crossed Saudi Arabia, got on another boat and ended up in Sudan. I didn’t want to stay in Sudan or Yemen, because both are war-torn countries. 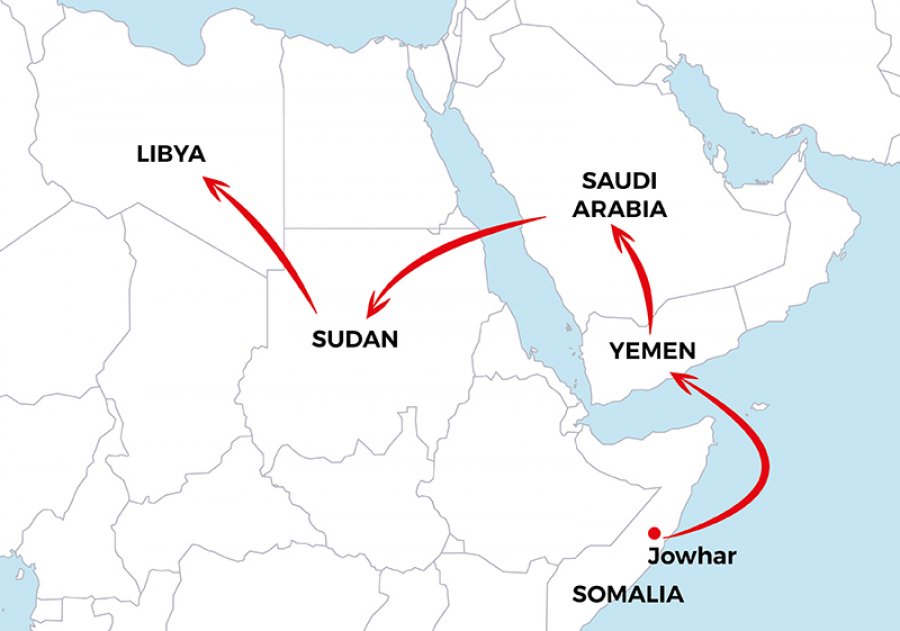 The first part of Asad's journey saw him leave Somalia, only to end up in Libya.

I decided to go by road to Libya and from there to Europe. I had to pay people traffickers to be able to continue my journey. I stayed in a house in Libya, I was prevented from leaving. Later I got arrested and thrown into prison but, after two months, I managed to escape. I found work to pay for my crossing to Italy. It was in Libya that my bag with all my belongings was stolen. My identity papers were in it too.

I finally managed to board a dinghy going to Italy but it started to sink. We were lucky because a bigger boat [a search and rescue vessel] came and rescued us. After several days, we arrived in Palermo. I wanted to apply for asylum in Italy but I had been told, “There’s nothing for you here”. So again I had no other choice than to leave. I travelled through Palermo, Verona and then Munich in Germany. I spent about a month in Italy before reaching Germany. 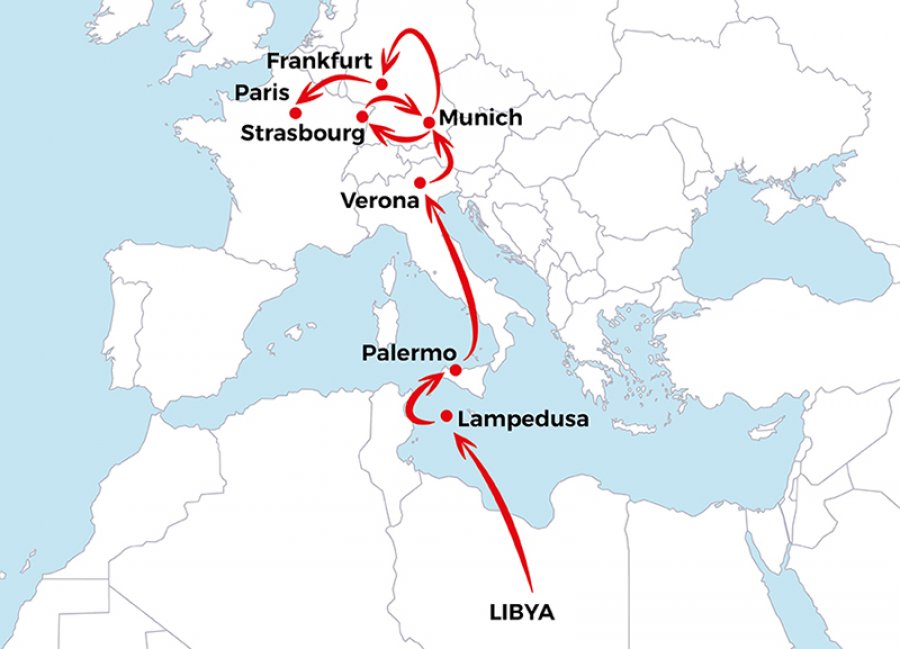 Asad managed to escape Libya, boarding a small boat to cross the Mediterranean, before arriving in Europe.

In Germany, I was in a refugee camp but because of the Dublin Regulation I couldn’t apply for asylum there and they told me to return to Italy. But I knew Italy didn’t want me, so I decided to try my luck in France. After several attempts, I managed to cross the border into France and I arrived in Paris.

I’d heard of Porte de la Chapelle in Paris, so that’s where I went to ask for political asylum. The French authorities sent me to a little village near Limoges in central France and I had an interview at the Prefecture about my asylum application. I don’t know why, but it was rejected.

The accident happened in the asylum seeker centre near Limoges. One night, I fell out of the bunk bed I was sleeping in and fractured my spine. The pain was terrible. I couldn’t sit down so I had to stay standing up. Despite the accident, the police sent me to the police station in Hendaye in southwest France where I was locked up for 41 days. I only got to see a doctor once. 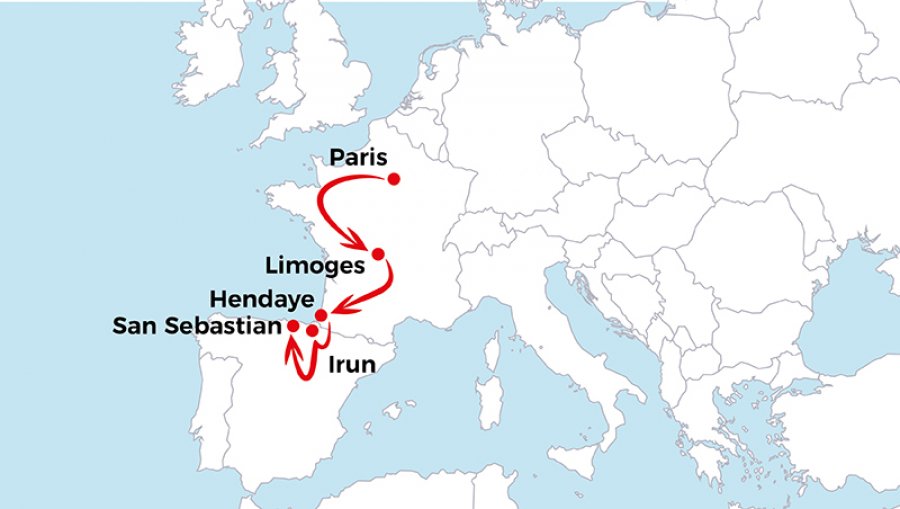 Asad's journey took him through France into Spain.

The police told me I was going to be sent back to my country and one day they came for me. We went to the airport, but when the pilot saw I couldn’t sit down and that I was in a lot of pain, he refused to take me on board. We turned round and went back to the police station in Hendaye. The police officers left me at the front door and said, “You’re free”. I was lost and in so much pain. I walked and walked, but I had nowhere to go.

I’d prefer the person who rescued me to tell you what happened next. Things were really bad for me at that point so I don’t remember much.

My family and I were riding our bikes close to the station in Hendaye when we met Asad. We saw right away he needed to get to a hospital urgently. But I knew that, as a rule, it’s more difficult for foreigners to obtain medical treatment in France than in Spain, so we decided to walk with him to Irun on the other side of the border in Spain. We called a Spanish ambulance, but as soon as I mentioned I thought the person was a migrant, they refused to come. We then decided to go to a nearby Red Cross migrant centre, but there was no one there. In the end, we met somebody willing to call the hospital again and eventually the ambulance showed up.

Asad spent two days in the hospital, but the doctors gave him no diagnosis and told him to leave. A voluntary organisation we told of his situation took him to a migrants’ squat. His condition was deteriorating, so we decided to take him back to the hospital where they had initially refused to admit him. We had to organise a demonstration with the local volunteers to get him medical treatment.

Asad was finally sent to a specialist medical centre in San Sebastian.

That was when I began to see light at the end of the tunnel. Not one of the European countries I’ve been to previously cared about me. Nobody wants to take people like me. Now I’m having Spanish lessons in the centre and rehabilitation to help me to be able to sit. I have people around me to assist me and give me support. I’m going to apply for political asylum and I hope this time it will work.